Monster Hunter Rise brings the ultimate hunting challenge for both newcomers and veterans, and regardless of which foe you face, you will have the best time learning to fight these powerful monsters. Of the many different weapons we can choose from, some will stand out more than others depending on your preferences, and such is the case with the Switch Axe.

The Switch Axe is a heavy-hitting sword-axe that is capable of switching between two modes. What the Switch Axe lacks in defense it makes up for in leaping attacks, elemental slices, and explosions. Let's take a look at this weapon's attacks, Silkbind Abilities, Switch Skills, and more to learn how to master the Switch Axe. 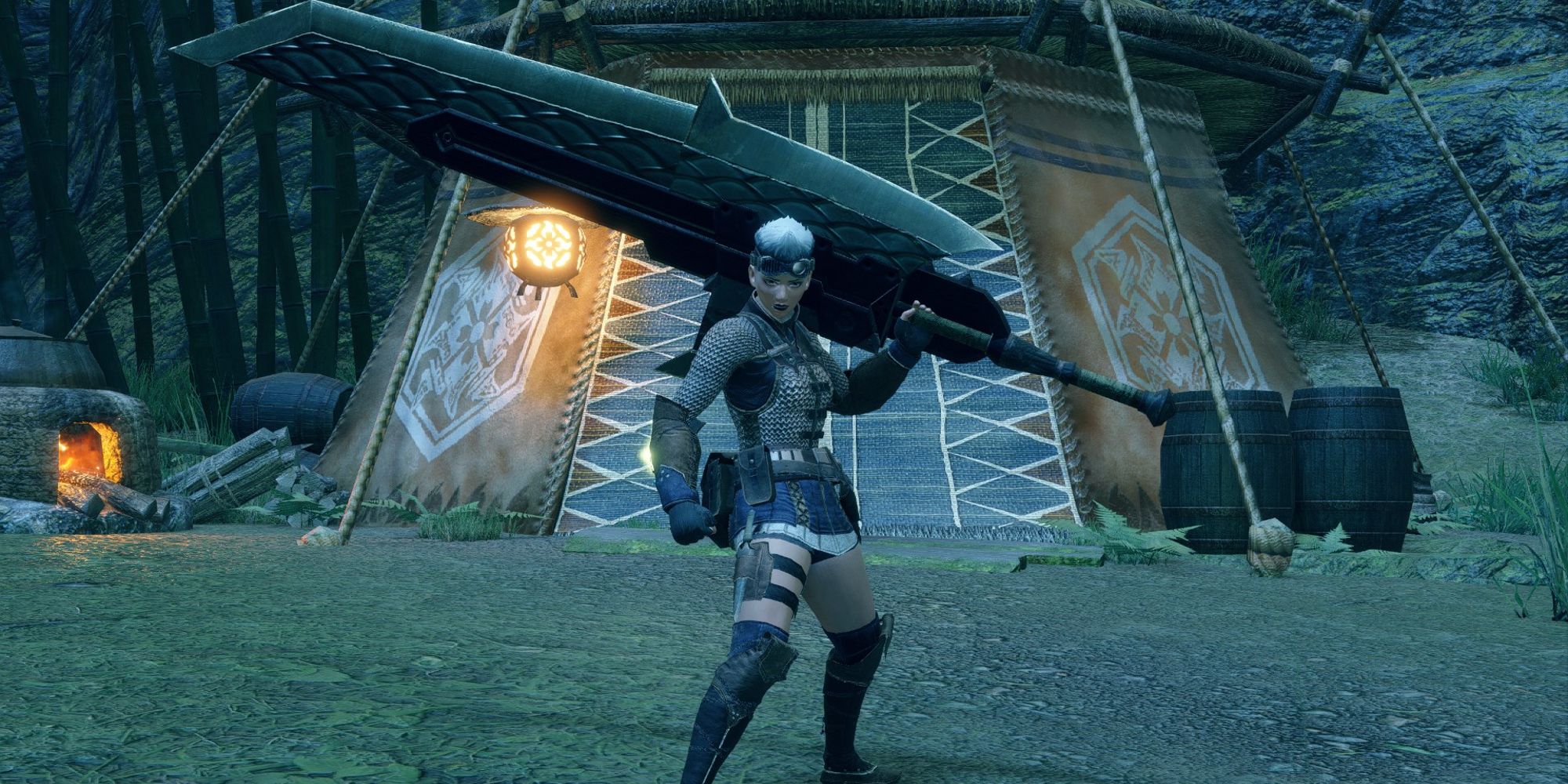 The Switch Axe is a unique weapon in that it has two sets of moves, one for Axe mode and one for Sword mode. Axe mode makes you move faster, but the actual swings are slow and heavy. Conversely, you move slowly in Sword mode, but its attacks are quick. Below is the controls page in the game's Hunter's Notes for Axe mode.

By pressing ZR, you will switch between Axe and Sword mode. You will only be able to morph into Sword mode if the Switch Gauge is filled past the white indication line. Otherwise, you will perform a manual reload, taking a few seconds to fill up the Switch Gauge. After a manual reload you'll have to press ZR again to switch into Sword mode, meaning manually reloading your gauge takes a considerable amount of time.

Instead, you can build up Switch Gauge by using Axe mode attacks or waiting. The Gauge will fill slightly over time, but it can be increased more significantly by using the Silkbind Ability Switch Charger.

Additionally, pressing X after a Wild Swing combo (Rapidly pressing A) will cause you to do a Heavy Slam, which will speed up charging the Switch Gauge. Use this in conjunction with Switch Charger to quickly get back into Sword mode. 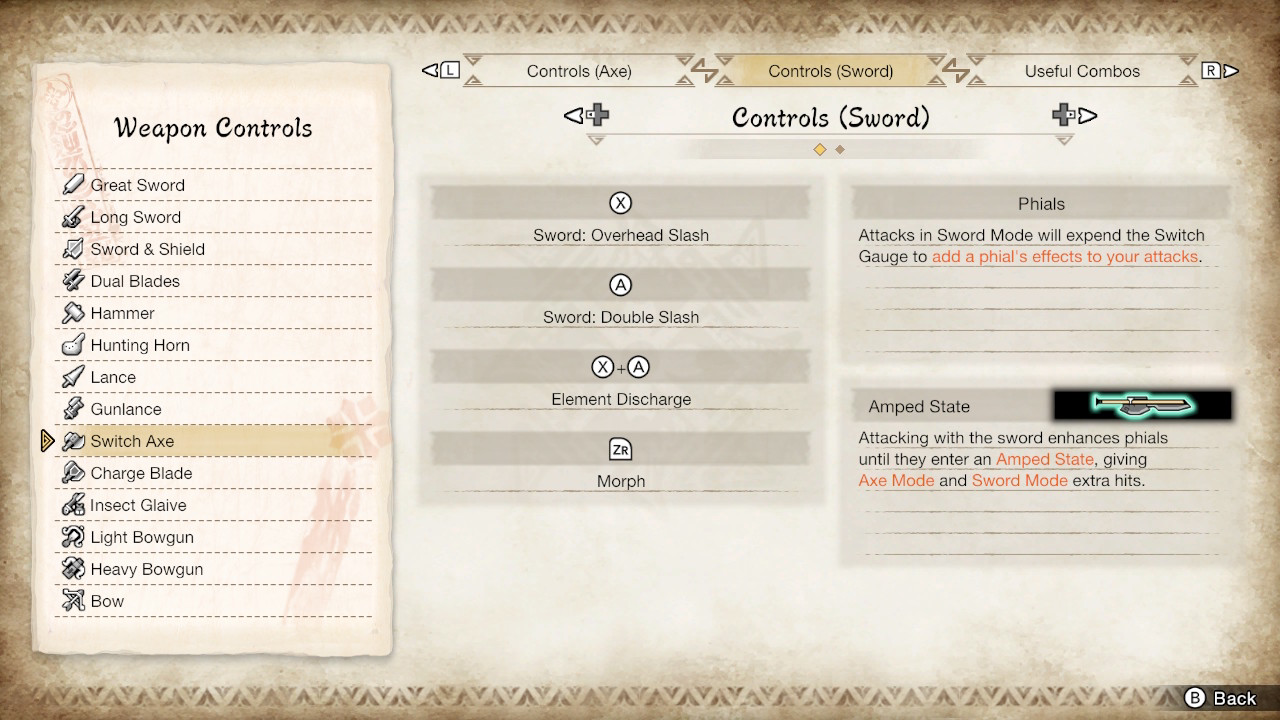 Here are the basic controls for Sword Mode. This mode of the Switch Axe gains access to Phials and the Amped State.

The Amped State builds up by attacking in Sword mode. Once the gauge is full, all attacks in both modes deal extra hits and apply the effect of the weapon's phials. Phials will deal damage according to the weapon's element, making Switch Axe great at building up elemental damage and effects like Poison. Here is each phial type and what they do.

Pressing X+A while in Sword mode will perform an Elemental Discharge, where you will be stationary while thrusting the Switch Axe forward, releasing elemental energy as you repeatedly press A. After charging up, the energy will then be dispersed in front of you, exploding in a blast of elemental damage.

If you execute an Elemental Discharge while in the Amped State, you will instead perform Zero Sum Discharge, which will latch you onto the monster before releasing the blast of elemental damage. This ability is the Switch Axe's most important method of dealing damage.

Switch Charger (ZL+A/B): Uses a Wirebug to launch you forward while quickly regenerating your Switch Gauge. In addition, the Switch Gauge won't decrease for a short period.

Invincible Gambit (ZL+X/Y): A forward-moving spinning attack that fortifies the user, making them immune to flinching or being knocked by even the fiercest of attacks.

This Ability gives Switch Axe some much-needed defense while also playing into the weapon's strength of unleashing an unstoppable onslaught of attacks. However, Invincible Gambit does not charge the Switch Gauge with its three strikes.

Soaring Wyvern Blade (ZL+X/Y): Uses a Wirebug to fly up while slashing, ending with an Advancing Slash from midair. If the Advancing Slash is successful, the weapon's Amp Gauge fills up and a large explosion goes off where it connected.

This Ability may seem like just another flashy attack in the Switch Axe's arsenal, but it's a bit more versatile than that. Soaring Wyvern Blade can be used for repositioning, avoiding attacks, and charging the Amp Gauge.

Soaring Wyvern Blade can be used in Axe mode, but you will be unable to perform the Advancing Slash, so make sure to only use it when in Sword mode. 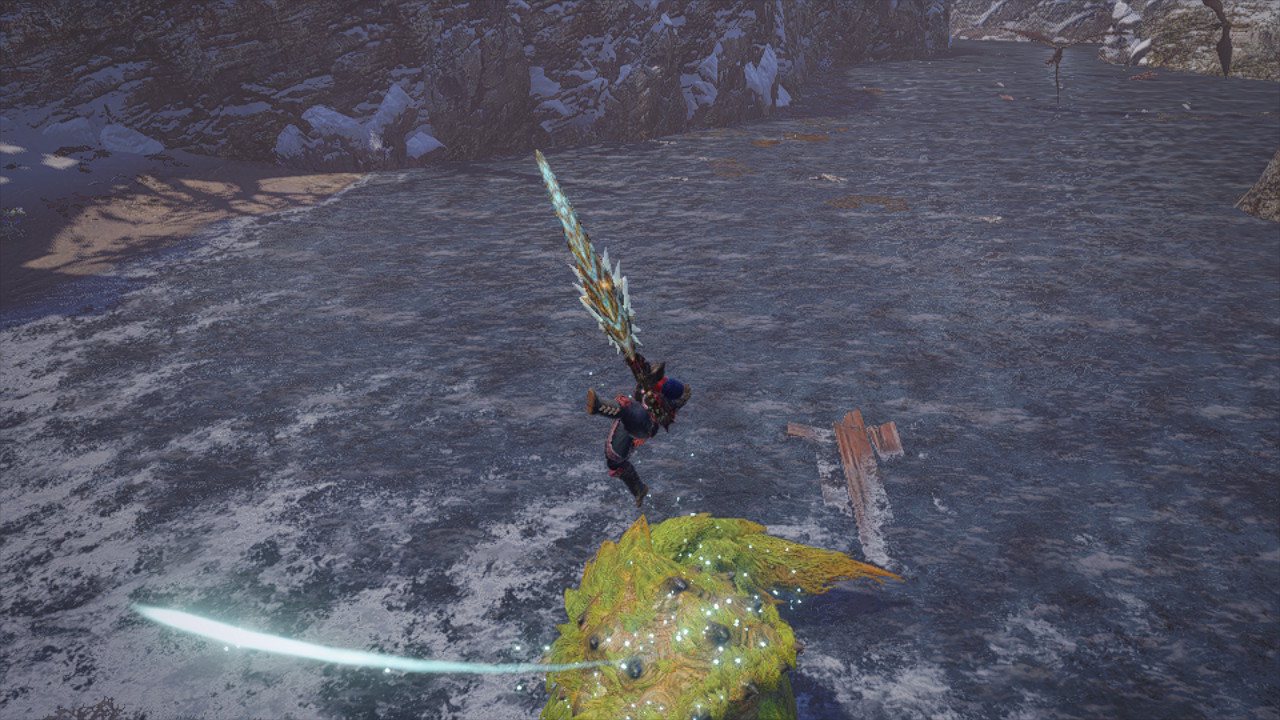 In Monster Hunter Rise, each weapon is given a variety of Switch Skills that you can change around to fit your playstyle. Let's take a look at the Switch Axe's skills, and which ones you should choose.

Both of these Silkbind Abilities are great, so the choice is up to you. Invincible Gambit is a great defensive tool for the Switch Axe and can balance out its lack of other defensive options. On the other hand, Soaring Wyvern Blade fully leans into the weapon's offensive capabilities and is a great tool for charging the Amp Gauge.

Pairing Switch Charger and Soaring Wyvern Blade will have you constantly in Sword Mode and the Amped State, allowing you to remain on the offensive for long periods. 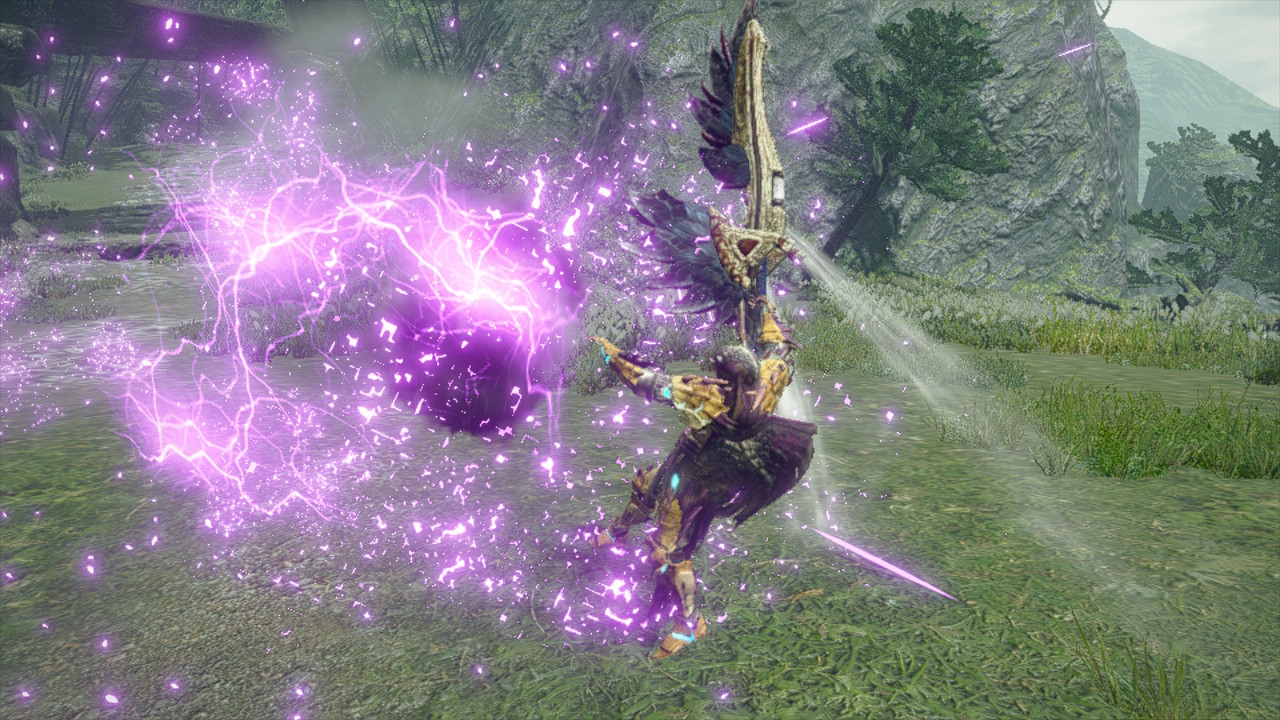 Now that we have an idea of the Switch Axes attacks, let's check out some additional tips and tricks to master this weapon.

Short Hops: After performing an attack in either mode, pressing B to evade will instead make you hop a short distance in the input direction. These short hops are essential for repositioning and evading. They also allow the Switch Axe to remain on full offensive — even through the monster's attacks.

Short hops can be made even better with 1 or 2 points in the Evade Extender Skill. Ideally, 2 points are perfect; 1 can work, but 3 is too much. The Switch Axe has no defensive options, so Evade Extender 2 will greatly benefit your capabilities of avoiding damage.

Changing Modes: Morphing between Axe and Sword mode is something you'll be doing often when using the Switch Axe, so it's important to know that there are a few different methods for transforming.

As stated above, pressing ZR will morph between Axe and Sword mode. ZR can be pressed after almost every attack in either mode to do a morphing strike that deals damage before switching to the opposite mode. Additionally, using Elemental Discharge will have you revert to Axe mode, regardless of which mode you were in before. In the same way, using Switch Charger will put you back into Axe mode.

Amped State: Try to stay in Amped State as much as possible, especially when using Elemental Discharges. Zero Sum Discharges are much safer to use than normal ones, and will almost always ensure you get the full amount of damage out of the attack.

The time you are in Amped State will slowly decrease after you enter it, so be sure to save Wirebug or two for a Soaring Wyvern Blade to quickly regain your Amped State.

Elemental Discharge: This move is Switch Axe's most powerful ability for dealing damage. As stated above, Zero Sum Discharge is the weapon's best way of safely and quickly ensuring tons of damage to the monster. Regular Elemental Discharges shouldn't be used unless the monster is knocked over or sleeping.

The Elemental Discharge can also be executed early by pressing down on the movement stick, causing the elemental blast to occur immediately. This explosion will deal less damage than a fully charged one but will allow you to still cause the explosion before a monster moves away. Additionally, you can cancel the attack completely if you stop pressing A during the moves charge-up animation.

Now that you've mastered the Switch Axe, get out there and hunt some monsters!