Mortal Kombat ‘s fraught relationship with the PC continues. Back in 2015, I tentatively reviewed Mortal Kombat X on the Xbox One because that’s what NetherRealm sent over, then was forced to yank our positive score when the PC port arrived like a train on fire. Then the situation got weirder as NetherRealmcanceled the releaseof the expanded XL edition on PC, only to surprise-release itsix months after the fact—a pattern that repeated with the release of Injustice 2, which hit consoles in May of 2017 and arrived on PC that winter.

Mortal Kombat 11 thankfully returns to day-and-date release parity, but review codes for the PC version didn’t go out prior to release. That’s rarely a good sign, and indeed Mortal Kombat 11 is another fantastic fighting game let down by a rudimentary port. And in classic WB fashion, there’s quite a furor around its monetization model as well.

At this point, I can’t say I expected any different.

The controversy is a shame, because Mortal Kombat 11’s story mode is amazing. It’s the perfect capstone to an impressive run of games, the unofficial-official trilogy that encapsulates 2011’s Mortal Kombat, 2015’s X, and now 11. What started as a nostalgic reboot of the Mortal Kombat origin story has now become a canon unto itself, complete with a Star Trek-style time loop to explain in-universe why the reboot exists. 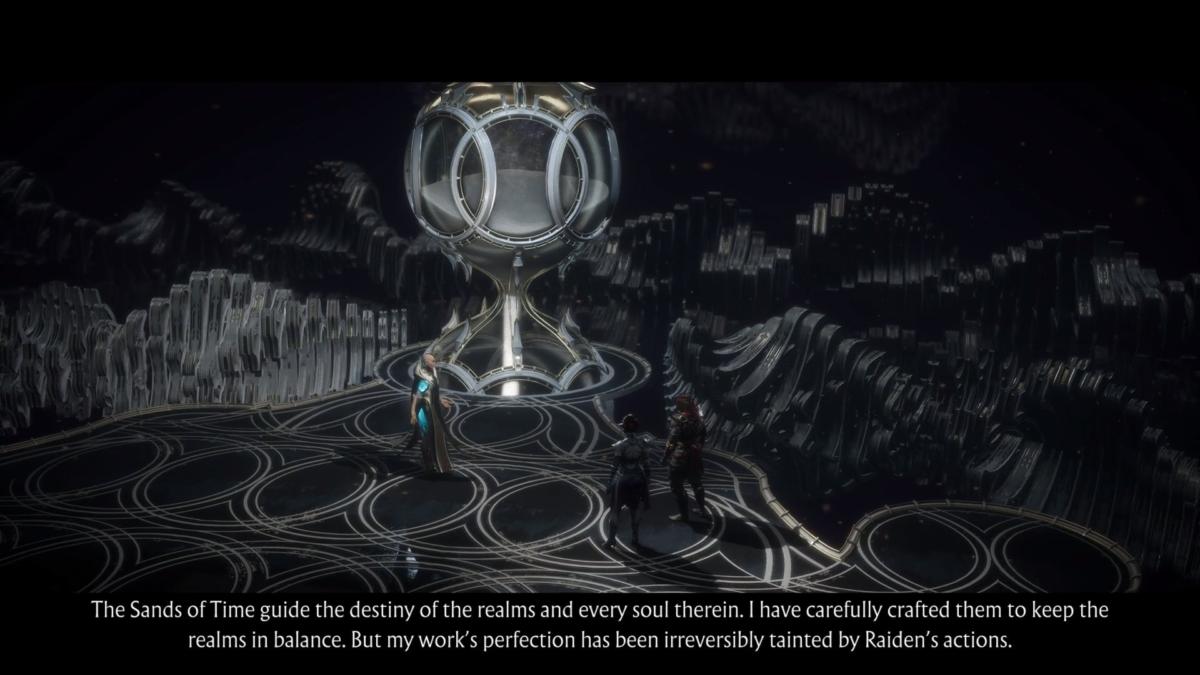 Newcomer Kronika is the one responsible, a god with dominion over time itself. Whenever the universe starts to go off-rails, it’s Kronika who brings it back in line. The problem? Raiden. Following his fall-from-grace at the end of X, Kronika brands Raiden irredeemable and sets out to erase his very existence from the universe.

It’s one hell of a story, and an excuse for some entertaining timeline shenanigans. Characters appear both as we saw them in the 2011 reboot and as we saw them in X, set 25 years later. This lends itself to interesting situations, like 2011’s young and idealistic Jax squaring off against X’s embittered Jax, or Sonya Blade talking to her yet-to-be-born-in-her-timeline daughter Cassie Cage.

NetherRealm does right by its cast. That’s about all I can say without getting too heavy into spoiler territory, but there are a plethora of heartfelt moments in Mortal Kombat 11, surprising in a series best known for ripping hearts (or spines) out. 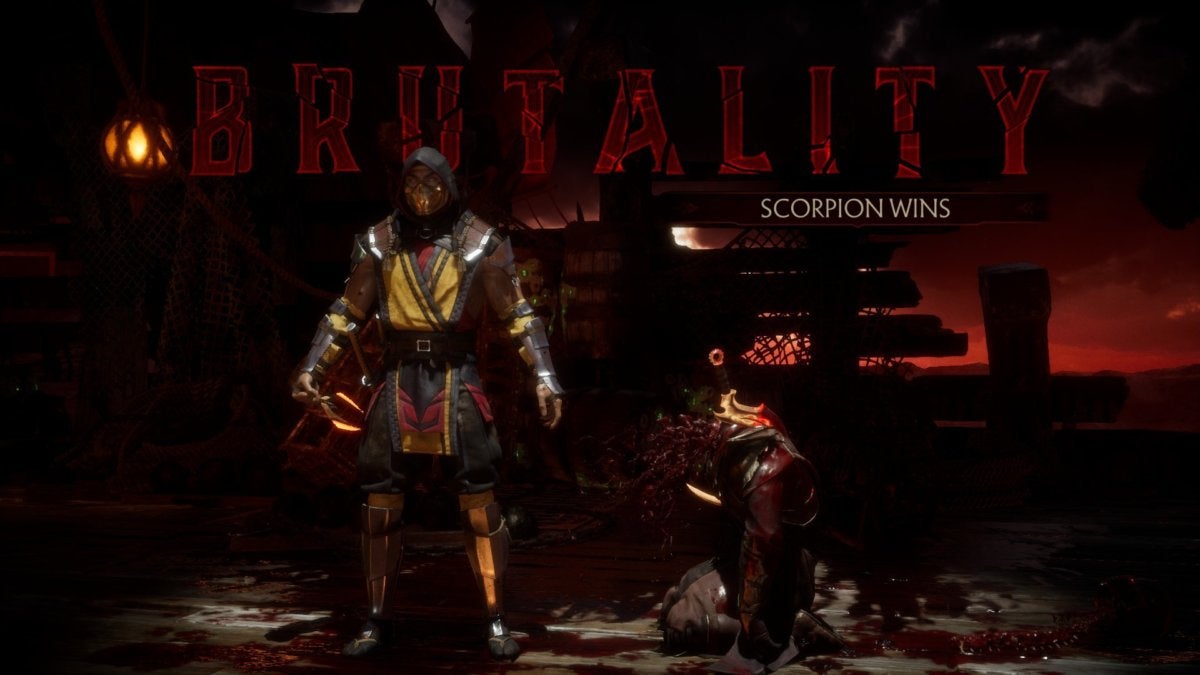 It’s proof once again that engaging storytelling stems from characters. Mortal Kombat’s source material is surface-level dumb, absolutely. This is a series about people drafted into a mystical fight club to protect Earth from demonic invasion. It’s undeniably stupid, and that’s fine! Growing up, I played Mortal Kombat because Scorpion shot a spear out of his arm and I thought, “that’s frickin’ cool.” That was enough.

But NetherRealm’s spent nearly three decades—nearly a decade with this trilogy alone—building these characters and their relationships, and it pays off here. Love and hatred, jealousy and betrayal, they all come due in Mortal Kombat 11. Sometimes the results are rendered epic, two demigods fighting for control of passage to the afterlife. Other times it’s quieter, an all-out fight giving way to an oddly poignant scene between two old rivals.

Per usual I felt most drawn to Scorpion, now Hanzo Hasashi, who buried his grudge with Sub-Zero in X and must reckon with what that means when his hate-filled younger self reappears. Most mainline characters have a satisfying arc though, even caricature-of-himself Johnny Cage. 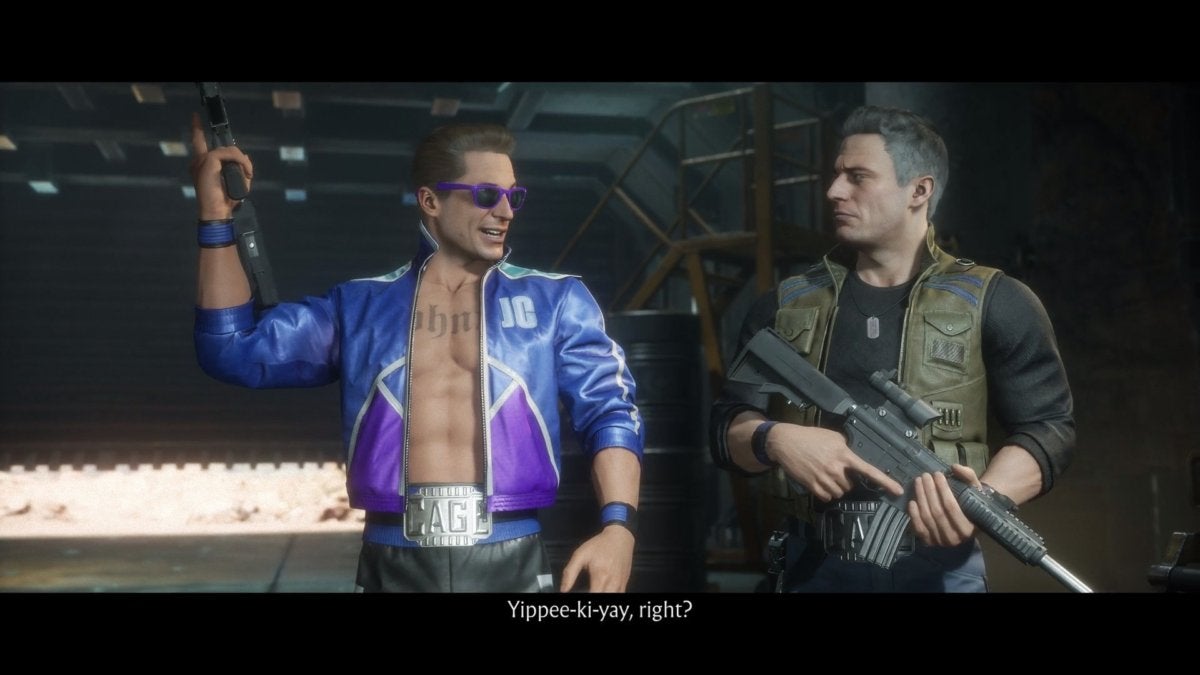 It’s not perfect, to be sure. The cast is large, and some get less of a focus than they should. Mortal Kombat X’s cowboy Erron Black shows up a half-dozen times for instance, with his older and younger selves placed on opposite sides of the conflict, to no avail. Nothing interesting happens with either. Kronika’s time-bending minion Geras is underdeveloped as well, never fully explaining his motivations or his capabilities, nor accomplishing much. Ronda Rousey’s voice acting for Sonya Blade is a particularly sore spot, her lifeless reads sucking the momentum out of that substory.

But for the most part it’s inspired, enough so I’ve spent half this review talking about emotions in a fighting game before discussing the actual fights.

Keep in mind I am no pro-level fighting game competitor, just someone hoping to pull off a few combos and have fun. From that (admittedly underinformed) standpoint, Mortal Kombat 11 is the strongest of the modern trilogy and perhaps the best fighting game NetherRealm’s ever built. 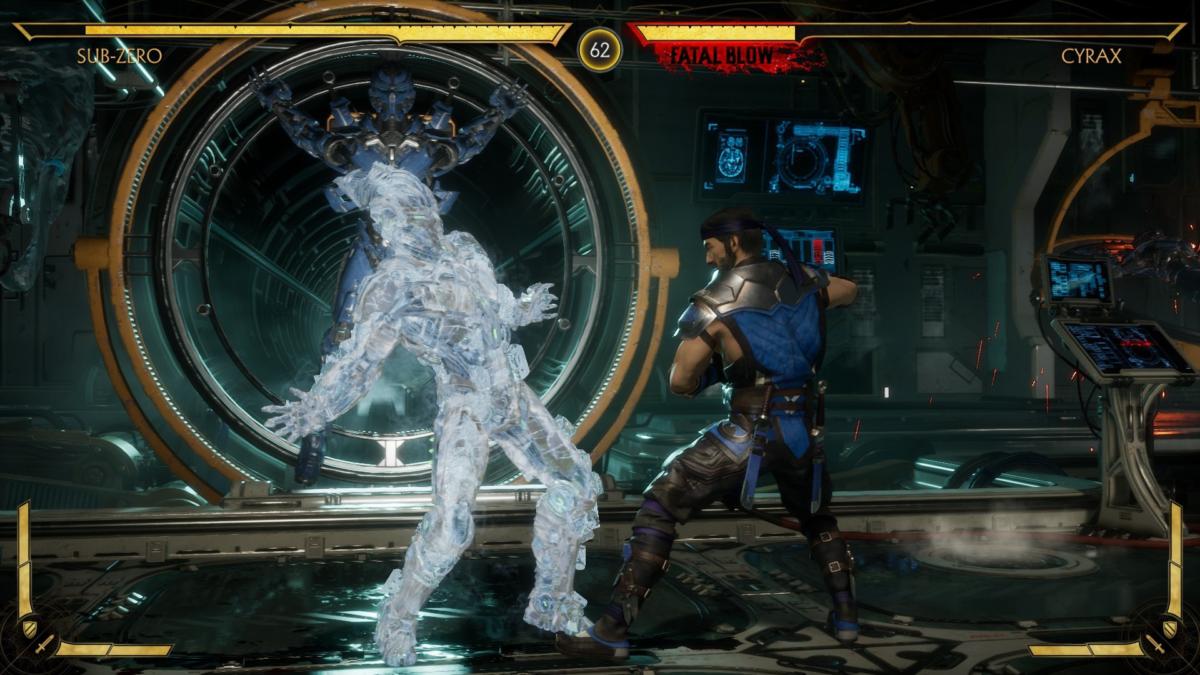 The biggest change is the Meter system. Starting with 2011’s Mortal Kombat reboot, you’d steadily fill a meter during a fight—small amounts by landing blows on an opponent, larger amounts by taking blows yourself. In theory, you’d then use this meter to “Enhance” certain moves, doing extra damage or breaking up an opponent’s combo.

“In theory” because, well, nobody really did this. You’d see it in tournaments, where players are more strategic, but the average Mortal Kombat fan likely saved the meter. Why? Because when it filled, you could do an “X-Ray,” a brutal all-or-nothing move that came with a gory animation and could take nearly half an opponent’s health away.

All those enhanced moves just sort of wasted away in favor of the X-Rays, so NetherRealm’s divorced the two. The X-Ray’s been rebranded the Fatal Blow and can be activated only when you’re low on health yourself, making it more of a comeback move and less an instant-win button. You’re also limited to landing it once per match–though if you miss the Fatal Blow or it’s blocked you get a second chance, another improvement on the old X-Ray system. 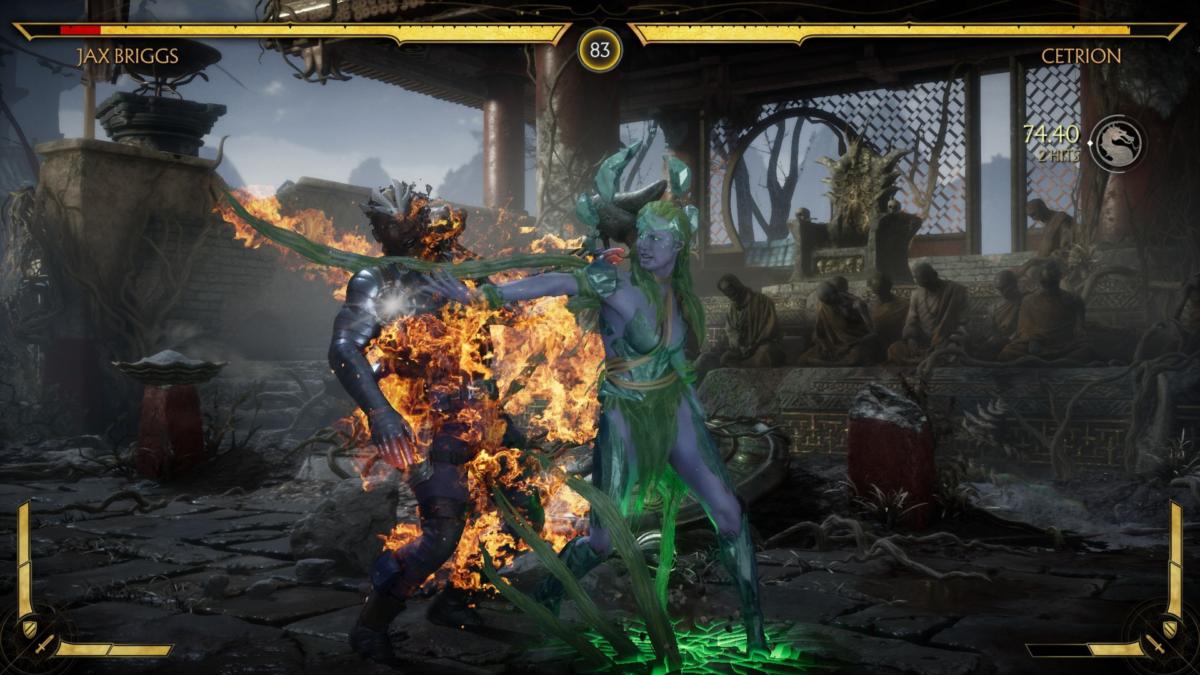 Then you have two additional meters, one for offense and one for defense. Because there’s no reason to save them, enhanced moves are now way more important, especially for setting up combos. As Scorpion, for instance, the iconic spear-toss now leaves your opponent lying on the ground, killing your combo. If you burn meter on your spear though, it’ll leave your opponent standing stunned in front of you, primed for an uppercut.

In that vein, the tutorials here are top-tier. NetherRealm’s really made an effort to explain fighting games and the accompanying jargon, from basic combos through to more advanced ideas like canceling and safe versus unsafe attacks. You won’t go pro overnight, but even those of you (like me) who’ve played fighting games casually for a few decades will probably learn a thing or two. 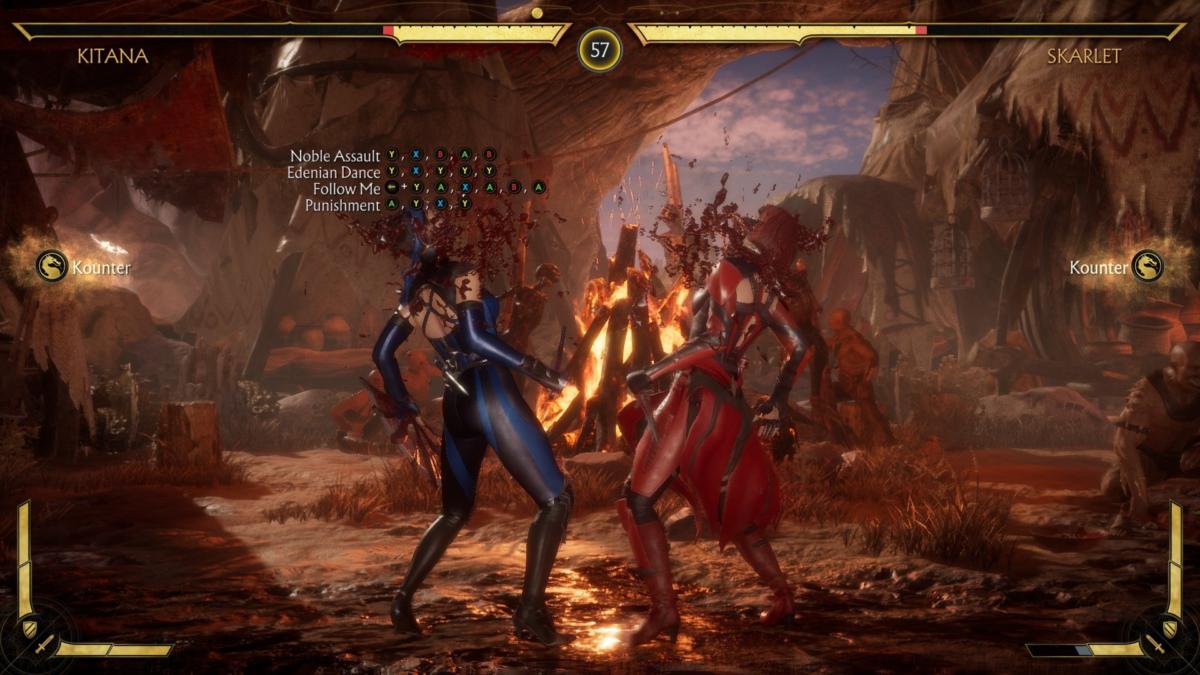 There’s also a nifty “Pinning” feature that allows you to overlay up to ten combos onscreen, letting you practice lengthier button sequences without constantly diving back into the menus to refresh your memory. Again, it’s a cool quality-of-life feature that’s already helped me feel like a better Mortal Kombat player after just a few days with 11.

“Wow Hayden, this all sounds great—but you started this review sounding pretty disappointed. Controversy, right? What gives?” And alas, now we reach the problem section.

Mortal Kombat 11 is in better shape at release than Mortal Kombat X was, but that’s a low bar. In ten or so hours, I’ve experienced multiple crashes to desktop with 11, once mid-fight. I’ve also seen all manner of glitches, objects (usually beards) smearing across the screen or the audio desyncing during cinematics. This latter happened all the time, to the point where it became second nature to pause and resume the game every minute or so, snapping the two back in sync. 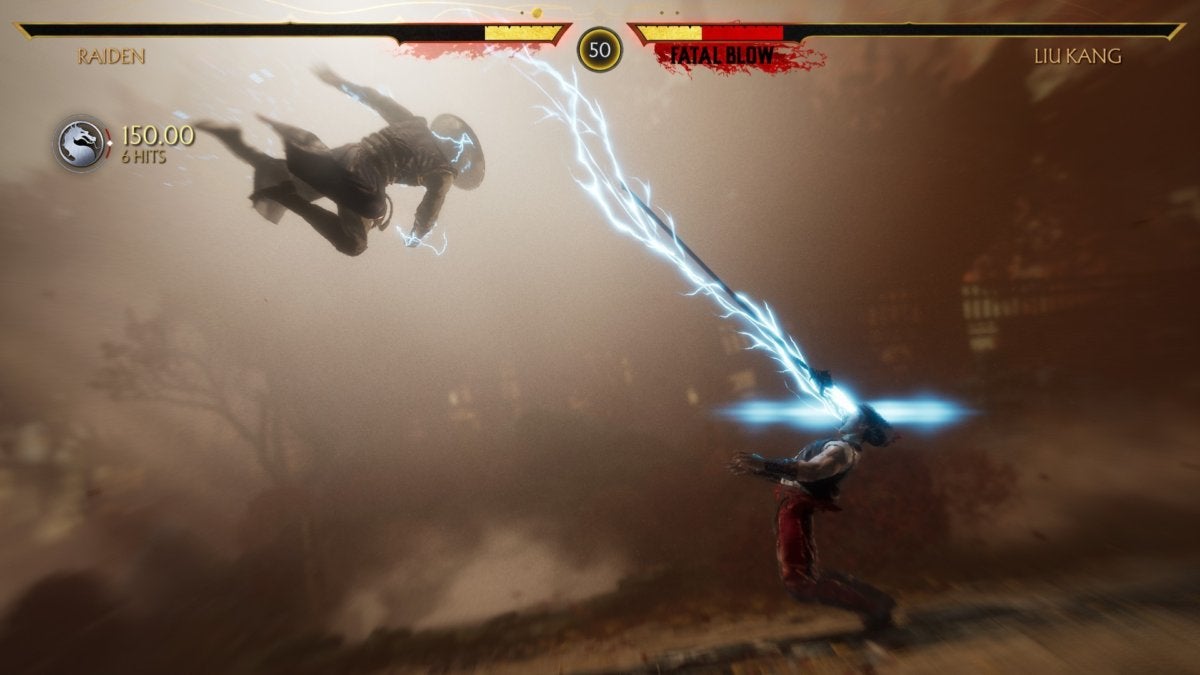 Scenes also tended to stutter whenever the game was background-loading, aggravating the audio sync issue. I was admittedly playing the game on a 7,200rpm hard drive, not an SSD, but that’s not really an “edge case” setup—nor is Mortal Kombat 11 such a visual stunner that I’d expect to have load-streaming problems.

And then there’s the frame rate issue, a constant thorn. Fights in Mortal Kombat 11 are rendered at 60 frames per second, but everything else is done at 30. That means menus, sure, and also the spinoff “Krypt” mode—more on that later. But it also means all of the story scenes, as well as the mid-fight Fatal Blow animations and end-of-fight fatalities.

The transitions are clumsy, particularly from story cinematic to fight. Mortal Kombat 11 stutter-stops its way from 30 frames per second up to 60, a choppy ramp-up that often lingered into the first few moments of the fight, throwing off the initial pacing. I didn’t notice it as much when starting one-off fights, but it shouldn’t happen ever. 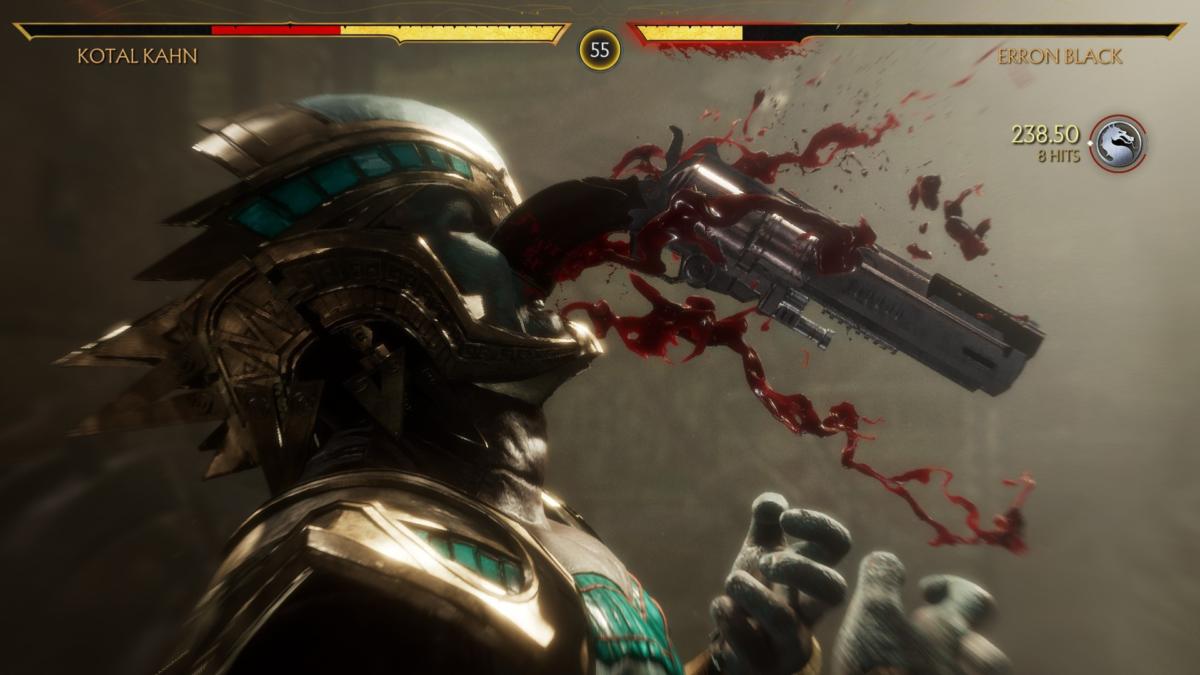 As for Fatal Blows and fatalities, locking them to 30 frames per second is hard to defend. It doesn’t really make a difference, of course. You’re just sitting there watching a little movie. But again the transitions in and out feel slightly stilted, and the whole issue seems easily avoided by rendering at least the mid-match Fatal Blows at 60 to keep the action smooth. I imagine there’s a reason NetherRealm didn’t do this, because it’s consistent across the PC and consoles, but for the life of me I can’t explain it.

Anyway, the other issue that’s surfaced with Mortal Kombat 11 is monetization. Like it did with Injustice 2, NetherRealm’s leaned into customizing your fighters with skins, gear, new intros, and so on. Problem being, you have to unlock these cosmetics.

You do this via the Krypt, a spinoff mode that’s very cool in concept. It’s almost a game in its own right, letting you wander iconic locations from earlier Mortal Kombat games and solve basic puzzles along the way. 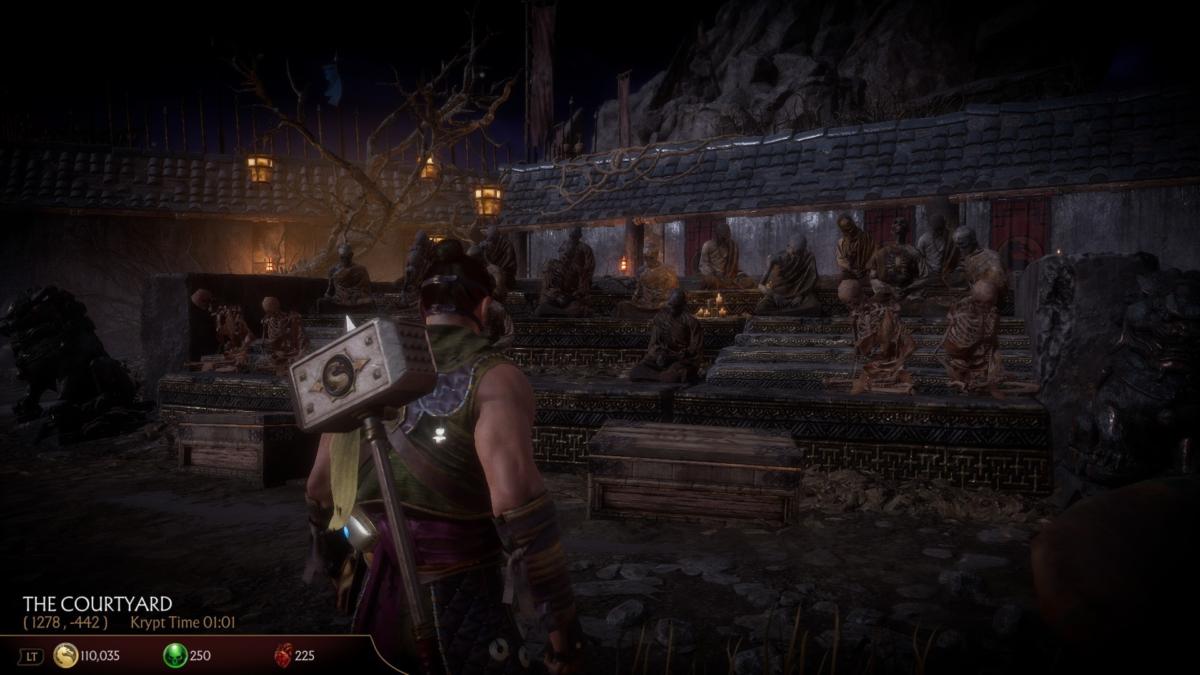 The Krypt is also filled with treasure chests, with each chest rewarding random skins, concept art, et cetera, in exchange for some amount of in-game currency.

Note: It’s all cosmetic. None of it is game-related, and so none of it really matters. That’s my official stance. NetherRealm didn’t gate game-changing combos behind loot boxes or anything, nor is this a Shadow of War situation, where the game seems designed to force players into paying up.

That said, the grind is untenable and the rewards too unpredictable. Players already crunched the numbers and determined it would take thousands of hours to unlock everything. NetherRealm’s said it plans to adjust the numbers and lighten the load, which makes you wonder why it released this way in the first place. But whatever, the point is the grind will be less exhausting at some point. 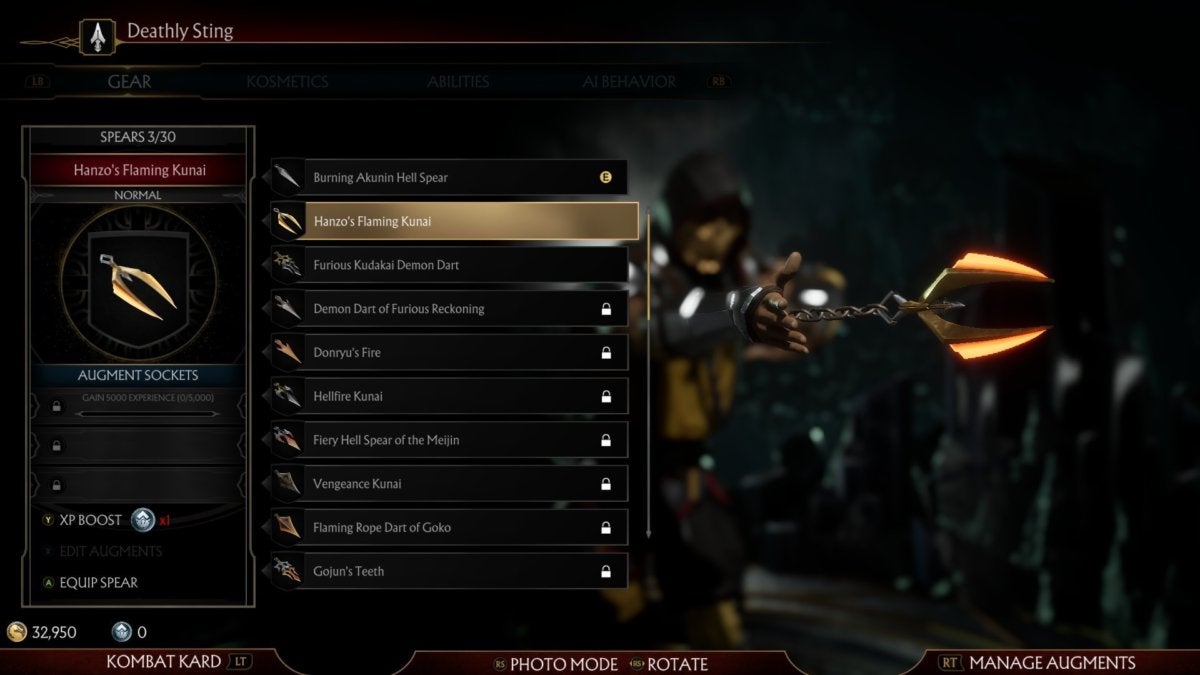 Ultimately the Krypt just isn’t very satisfying. There are so many possible rewards, and so few of them are ones you actually want. It’s a lot of fun exploring, but popping open chests is already fairly tedious, and even more so when all you get is junk. Not to mention, the Krypt’s performance is the worst of the entire game, locked to 30 frames per second and still regularly managing to plunge below that already-low threshold, even running on my Nvidia GTX 1080 Ti. Fixable? Sure, but it’s more salt in the wound at release.

There’s more I haven’t touched on, some (like the randomized Towers) that NetherRealm’s already mentioned “fixing,” other aspects I just don’t care much about when the review’s already run this long. Suffice it to say, Mortal Kombat 11 is excellent if you’re in it for the story, and a solid fighting game underneath as well, but the experience is marred by rough edges. Given the state of NetherRealm’s last few games on PC, I’m not sure we could’ve expected much more. If anything, this is an improvement.

A last note, unrelated to the score but still important: I’ll be curious how post-release support goes. After the Mortal Kombat XL drama, I wouldn’t put anything past NetherRealm, and that’s worth taking into account if you’re debating the PC version versus one of the consoles. For once, console might be the safer bet—and I never say that. Consider yourself warned.