My Nintendo Store UK is giving away a free game with all Nintendo Switch OLED purchases this weekend, with the choice between The Legend of Zelda: Skyward Sword HD or Mario Kart Live: Home Circuit.

Anyone who's ever looked at the price of Nintendo Switch games will have likely noticed by now that Nintendo doesn't tend to drop prices on any of its games very often. The same can be said for Nintendo consoles, which usually remain the same price for most of the year, save for special events like Cyber Monday and Black Friday.

However, just in time for Christmas, My Nintendo Store UK has started running a special deal on OLED models of the Nintendo Switch. Starting yesterday at 7am GMT, anyone who purchases either the White or the Neon Blue/Neon Red OLED Switch will also receive a free game to go along with it. 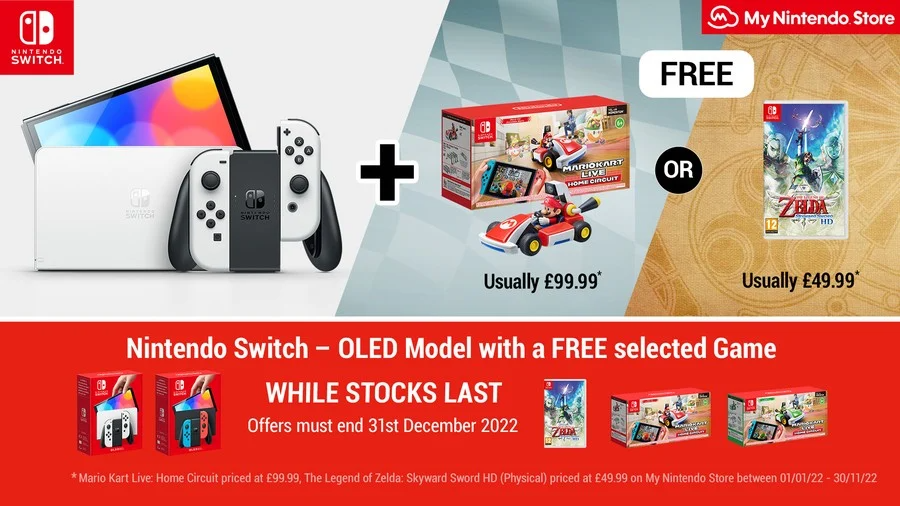 Customers will get a choice between two different games. The first is The Legend of Zelda: Skyward Sword HD, the 2021 remaster of the Wii classic that updates the graphics, adds in multiple save slots, and speeds up some of the more annoying elements of the original 2011 release, such as the slow-moving text boxes and repetitive item descriptions.

Although Skyward Sword is generally regarded as one of the Wii's best games, it seems like choosing Mario Kart Live: Home Circuit might be the smarter choice considering that it has a value of £99.99 on its own. It does see price drops a bit more frequently than Skyward Sword, but as it stands now it'll save you the most money.