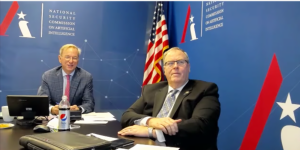 The National Security Commission on Artificial Intelligence today released its report today with dozens of recommendations for President Joe Biden, Congress, and business and government leaders. China, the group said, represents the first challenge to U.S. technological dominance that threatens economic and military power for the first time since the end of World War II.

The commissioners call a $40 billion investment to expand and democratize AI research and development called for in the report a “modest down payment for future breakthroughs,” and encourage an attitude toward investment in innovation from policymakers akin that which led to building the interstate highway system in the 1950s.

The report recommends several changes that could shape business, tech, and national security. For example, amid a global shortage of semiconductors, the report calls for the United States to stay “two generations ahead” of China in semiconductor manufacturing and suggests a hefty tax credit for semiconductor manufacturers. President Biden pledged support for $32 billion to address a global chip shortage and last week signed an executive order to investigate supply chain issues.

“I really hope that Congress deeply considers the report and its recommendations,” AWS CEO Andy Jassy said today as part of a meeting held to approve the report. “I think there’s meaningful urgency to get moving on these needs, and it’s important to realize that you can’t just flip a switch and have these capabilities in place. It takes steady, committed hard work over a long period of time to bring these capabilities to fruition.”

Commissioners who helped compile the report include Oracle CEO Safra Catz, Microsoft chief scientist Eric Horvitz, Google Cloud AI chief Andrew Moore, and Jassy, who takes over as CEO of Amazon later this year. Publication of the final report is the last act of the temporary commission Congress formed in 2018 to advise federal policy.

The 756-page report calling for the United States to be AI-ready by 2025 was approved by commissioners in a vote today. Moore and Horvitz abstained from chapters 2 and 11 of the report due to perceived conflicts of interest.

“I think it bears repeating that to win in AI, we need more money, more talent, stronger leadership, and collectively we as a commission believe this is a national security priority, and that the steps outlined in the report represent not just our consensus, but a distillation of hundreds and hundreds of experts in technology and policy and ethics, and so I encourage the public and everyone to follow our recommendations,” commission chair and former Google CEO Eric Schmidt said.

Now, Schmidt and other commissioners said, begins the work of selling these ideas to key decision makers in power.

Recommendations in the report include:

Within government, the report also goes beyond recommendations for the Pentagon, extending recommendations to Congress for border security and federal agencies like the FBI or Department of Homeland Security. For example, the report criticizes a lack of transparency of AI systems used by federal agencies as potentially affecting civil liberties and calls for Congress to amend impact assessment and disclosure reporting requirements to include civil rights and civil liberty reports for new AI systems or major updates to existing systems.

“For the United States, as for other democratic countries, official use of AI must comport with principles of limited government and individual liberty. These principles do not uphold themselves. In a democratic society, any empowerment of the state must be accompanied by wise restraints to make that power legitimate in the eyes of its citizens,” the report reads.

A statement from ACLU senior staff attorney Patrick Toomey, whose work focuses on national security, said the report acknowledges some dangers of AI in its recommendations, but “it should have gone further and insisted that the government establish critical civil rights protections now, before these systems are widely deployed by intelligence agencies and the military. Congress and the executive branch must prioritize these safeguards, and not wait until after dangerous systems have already become entrenched.”

The report argues that the consolidation of the AI industry threatens U.S. technological competitiveness in a number of important ways, exacerbating trends like brain drain and stifled competition.

Increases in funding and investment by China to be an AI leader by 2025 means more time is dedicated to China in the report than any other foreign nation. The report concludes that the United States could lose military technical superiority to China within the next decade.

“We have every reason to think that the competition with China will increase,” Schmidt said during the NSCAI meeting today.

To ward off rising models of techno-authoritarian governance like the kind practiced in China, the report calls for the United States to establish an Emerging Technology Coalition with allies. The report calls for high-level, ongoing diplomatic dialogue with China to discuss challenges emerging technology like AI presents in order to find areas for cooperation toward global challenges like climate change. That body could also act as a forum for sharing concerns or grievances about practices inconsistent with American values. Bilateral talks between the United States and China were previously recommended by AI policy expert and former White House economist R. David Edelman.

In defense, commissioners do not support a treaty for the global prohibition of AI-enabled autonomous weaponry since it is “not currently in the interest of U.S. or international security,” and because the report concludes that China and Russia would ignore any such commitment. Instead, the report calls for developing standards for autonomous weaponry.

In other matters related to foreign policy and international affairs, the commissions calls for an international agreement to never automate use of nuclear weapons, and to seek similar commitments from Russia and China.

Oracle CEO Safra Catz called collaboration within and among Department of Defense, U.S. government, and allies critical, and said that leadership in government is needed. “There’s so many important steps that have to be taken now.”

“It is our great hope that like-minded democratic nations work together to make sure that technologies around AI do not leak into adversarial hands that will give them an advantage over our systems and that we will unite together in the safe and responsible deployment of this kind of technology in military systems,” commissioner and In-Q-Tel founder Gilman Louie said today.

The United States has been working with international groups like the Organisation for Economic Co-operation and Development (OECD) and the Global Partnership on AI (GPAI), while last year defense and diplomatic officials from United States allies met to discuss ethical use of AI in warfare.