Neon White is a game that's full to the brim with coolness. Between its lightning-fast gameplay and its characters' huge personalities, everything about this FPS-platformer hybrid is stylish and sleek, presenting a fresh and unique new take on the afterlife.

The game's character designs are no exception. Every single individual you meet in Neon White looks undeniably cool in their own way, from the Neons to the Angels and even extending to the incredibly annoying Believers and their terrible Heavenly Delight rewards. But which character designs are the best of the best? 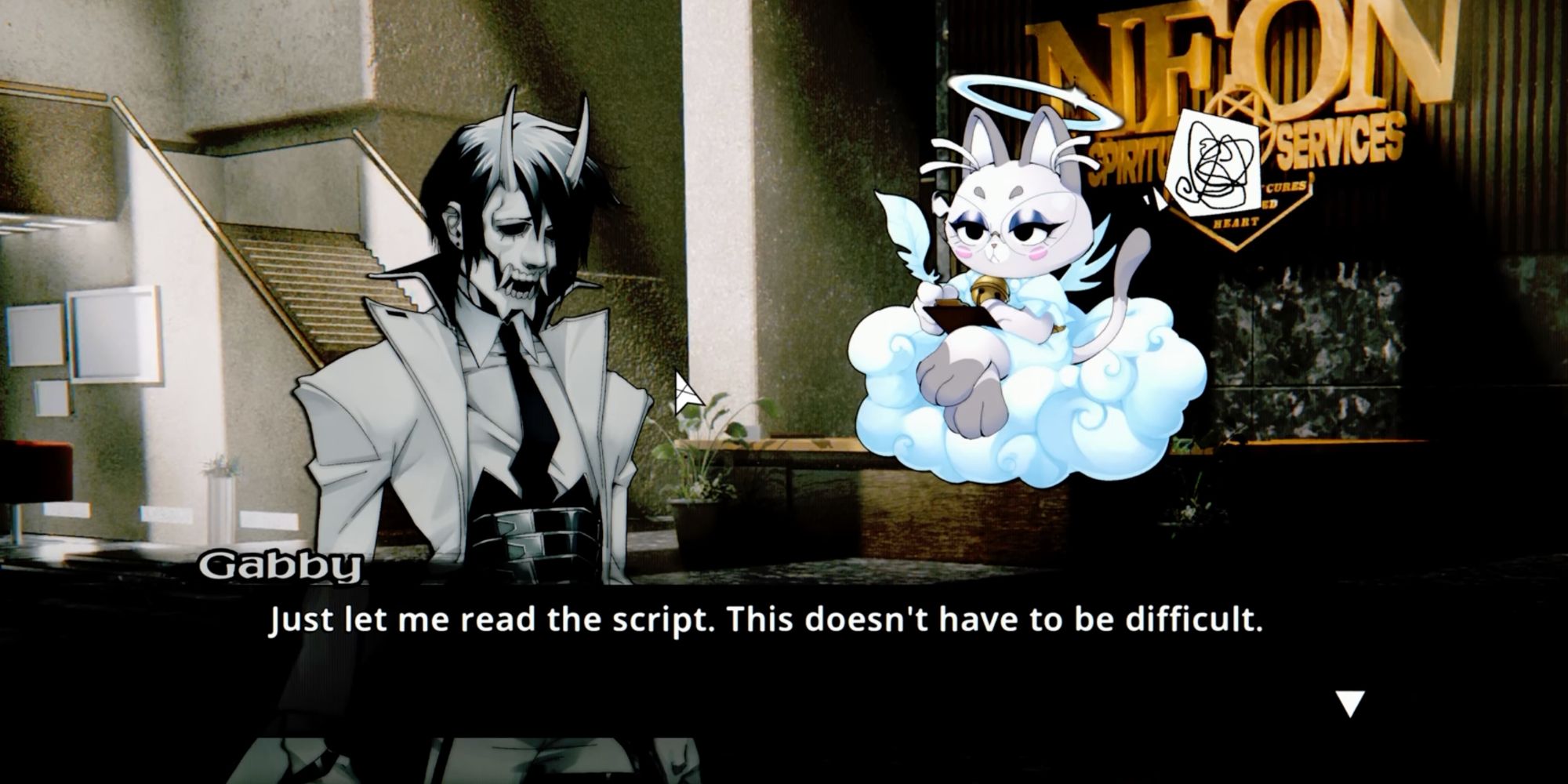 Listen, there's nothing really wrong with Gabby's design. Like other angels in Neon White, Mikey's secretary presents herself as a small cat, albeit with the perpetually annoyed expression and relaxed demeanor of every underpaid secretary in existence. She's adorable, and she showcases her personality in her body language well.

The fact is, someone had to come last, and there's nothing that truly stands out about Gabby's look, aside from those undeniably fashionable glasses. This is undoubtedly intentional, as she's probably the most minor of the characters you'll repeatedly interact with in Central Heaven, the game's hub world. Bonus points for her intense apathy toward anything going on around her. 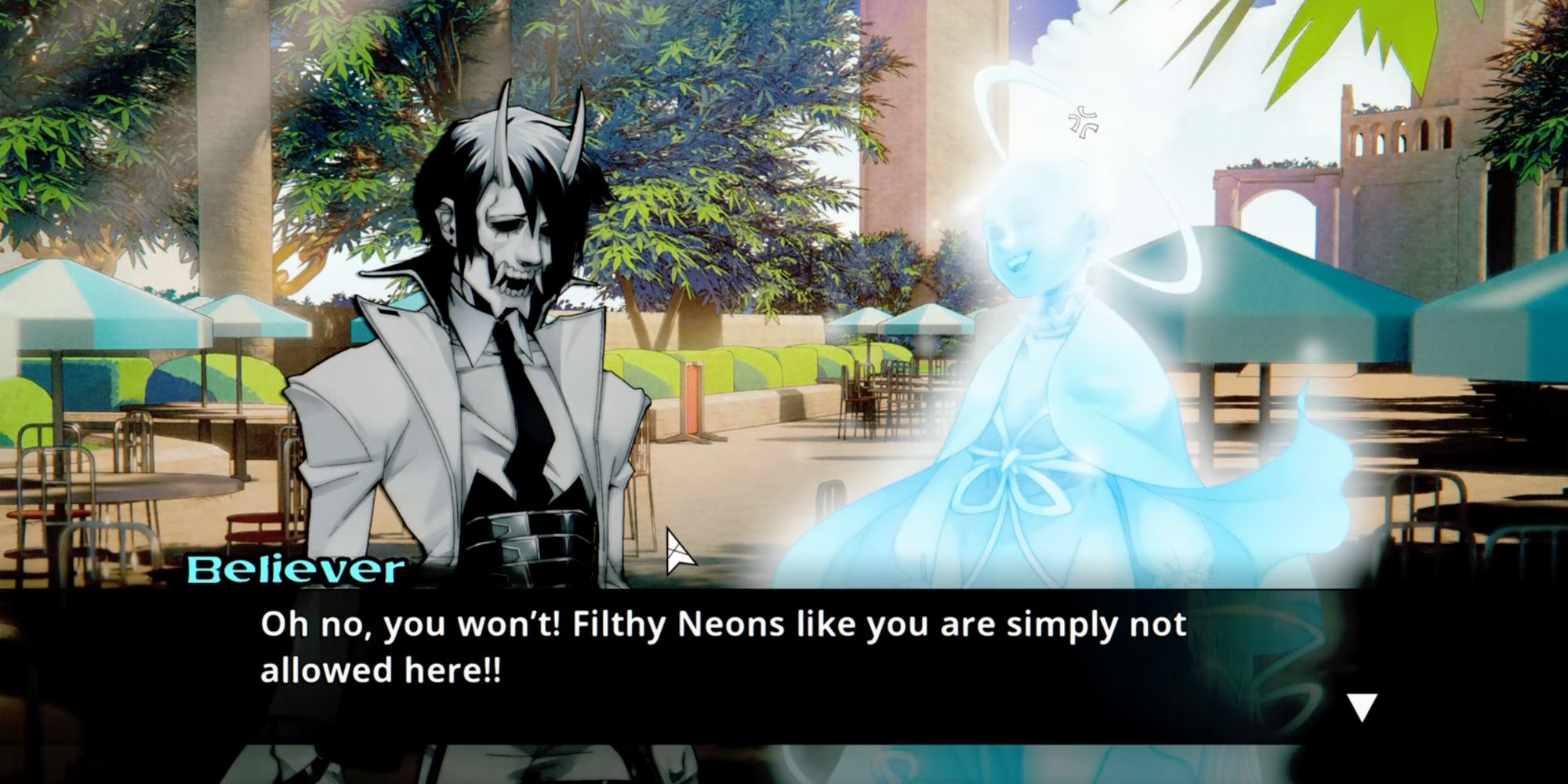 Whereas Gabby gains points for her unconcerned-but-helpful demeanor, we'd love to knock off a few points from the Presider of Punishments, the Master of Mercies, and the rest of the Believers, just for being the absolute worst. The Believers are the Angels in charge of organizing the contest taking place between the Neons, and they're every bit as sadistic and passive-aggressive as you might expect them to be.

Still, they do look pretty cool. Their glowing blue bodies and glimmering halos give them a truly angelic appearance, making them some of the only characters that genuinely feel heavenly. Too bad their personalities don't also fit the bill. 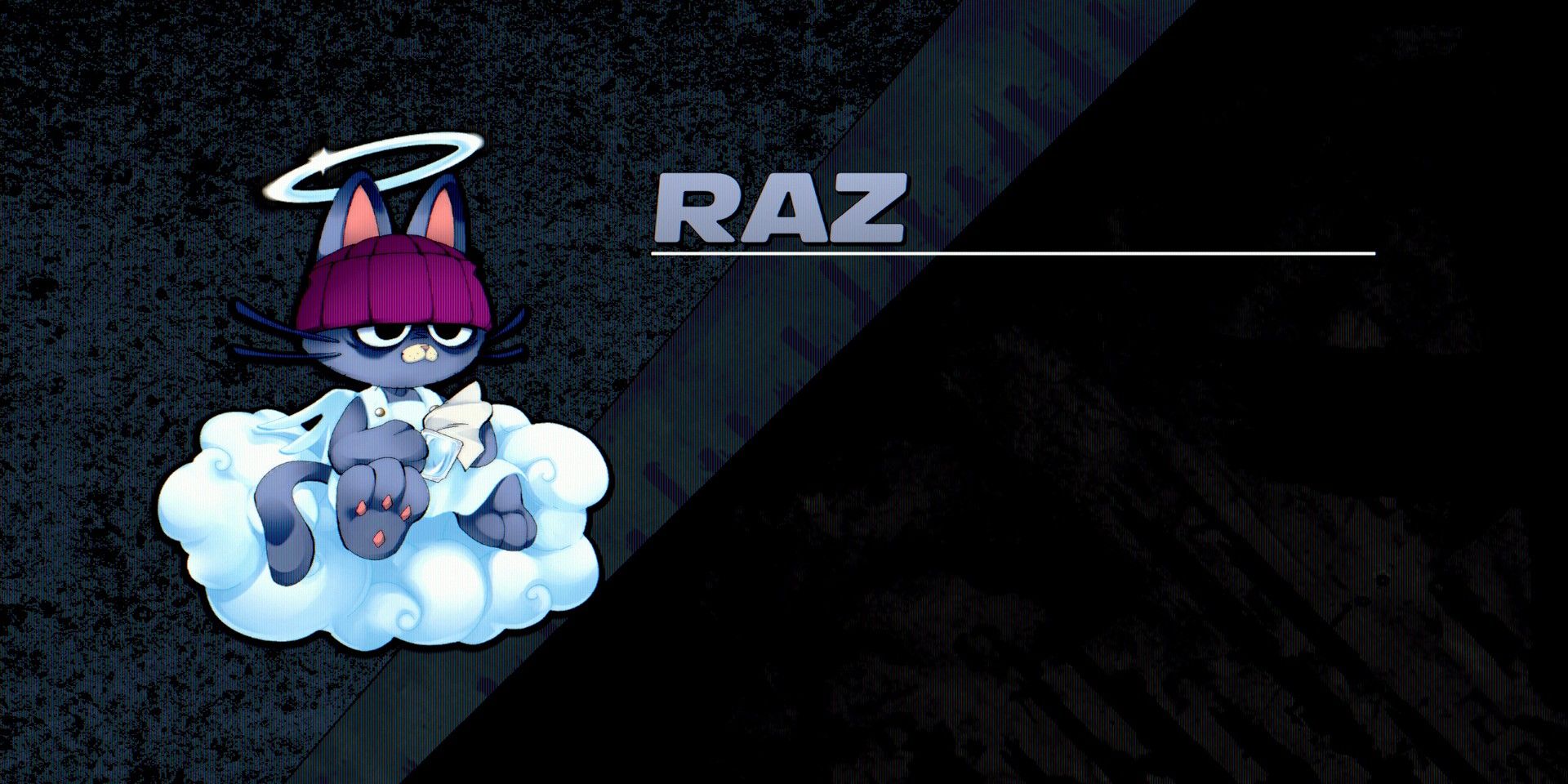 Raz is, honestly, just the best. He's perhaps the most unassuming, naive, and easily impressed bartender in existence, and it's truly hard not to love him for it. Throughout your adventures through Heaven, Raz is always good for a quick convo and a good laugh.

With his low beanie and lower eyes, his character design might leave you expecting him to come across as the slow-paced stoner type, and we can't say you'd be too far off. Raz just wants to kick back, tend his bar, and ask White questions about the human world, and it's hard to be mad at the little guy for it. 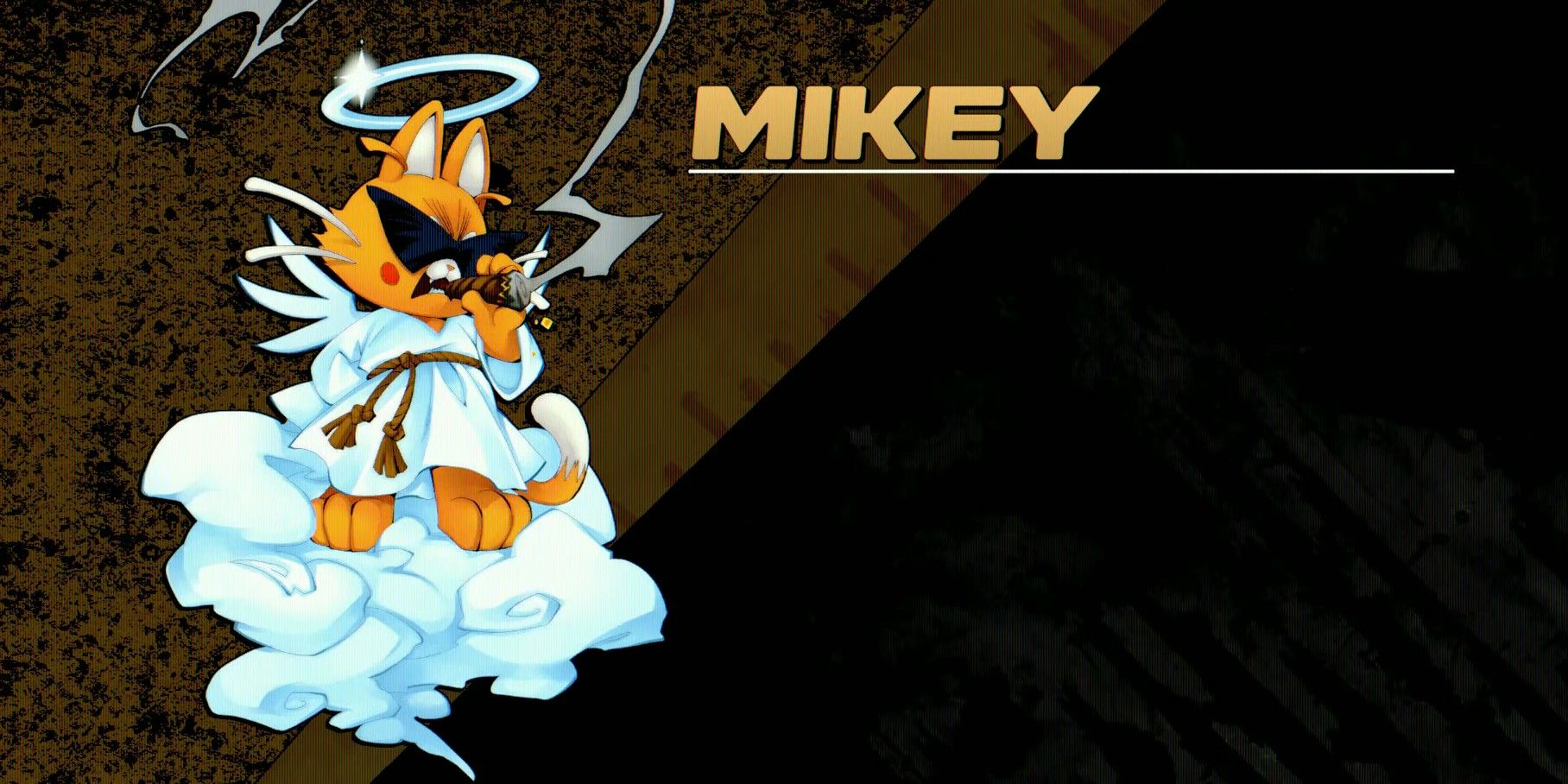 Mikey's got the most personality out of all the angels, by far. As Central Heaven's head honcho, he'll be issuing you orders from his office, all while being equal parts intimidating and adorable. Mikey's got cooler glasses than Gabby, and that's saying something.

Look, you can try and argue if you'd like, but turning a tiny orange cat into a mobster parody just works. Mikey's the cigar-puffing, gruff-voiced, lovable loudmouth that every team needs to help keep them on track. Just don't come into his office unannounced. He hates that. 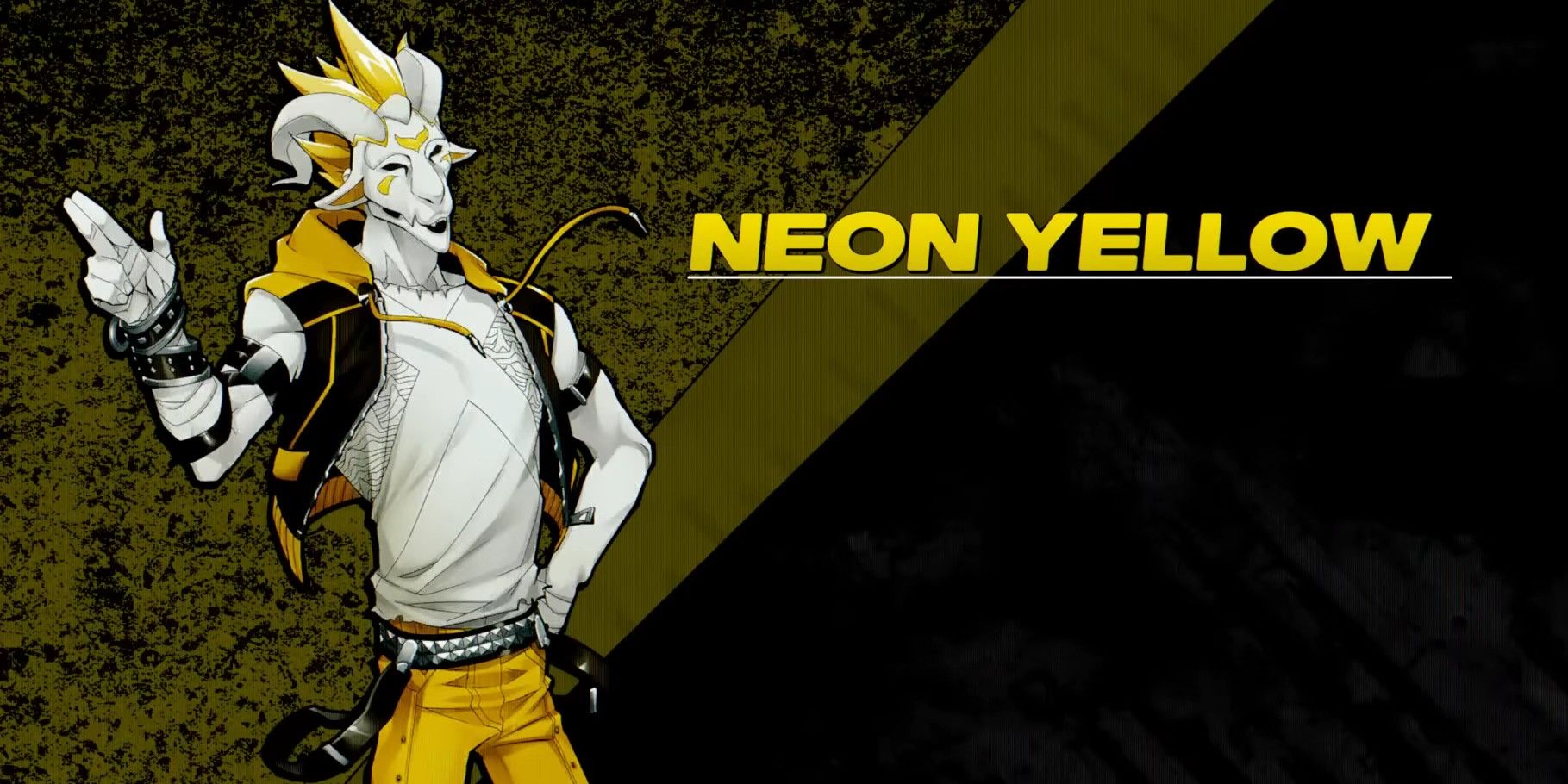 Neon Yellow is designed to be more bro than badass. His easygoing, fun-loving personality is reflected in his design, with a jock-like build, a fairly cool bomber jacket, and a goat mask that usually looks like he's sporting a big grin rather than an ominous scowl.

Still, just because he's the least cool Neon doesn't mean he's not cool at all. Yellow's the homie, in every way imaginable. Much like his boisterous personality, his design makes you want to grab a beer with him after a long day at work and forget all about your troubles, and he's always got a memorable quote or two for you. Everyone needs a Neon Yellow in their lives.

Neon Violet has the most explosive personality in the game, pun intended. As typical as it is to make the youngest and cutest member of the group the most dangerous and volatile, Violet honestly feels right as the resident homicidal savage. (Well, one of them.)

Violet's cute, teen-at-the-mall aesthetic does a good job of masking the rage beneath that adorable bunny mask. Everything about her look is cohesive and compliments the character that she is — it's just as appropriate to see her giggling like a schoolgirl as it is to watch her setting off explosives throughout the game's levels. 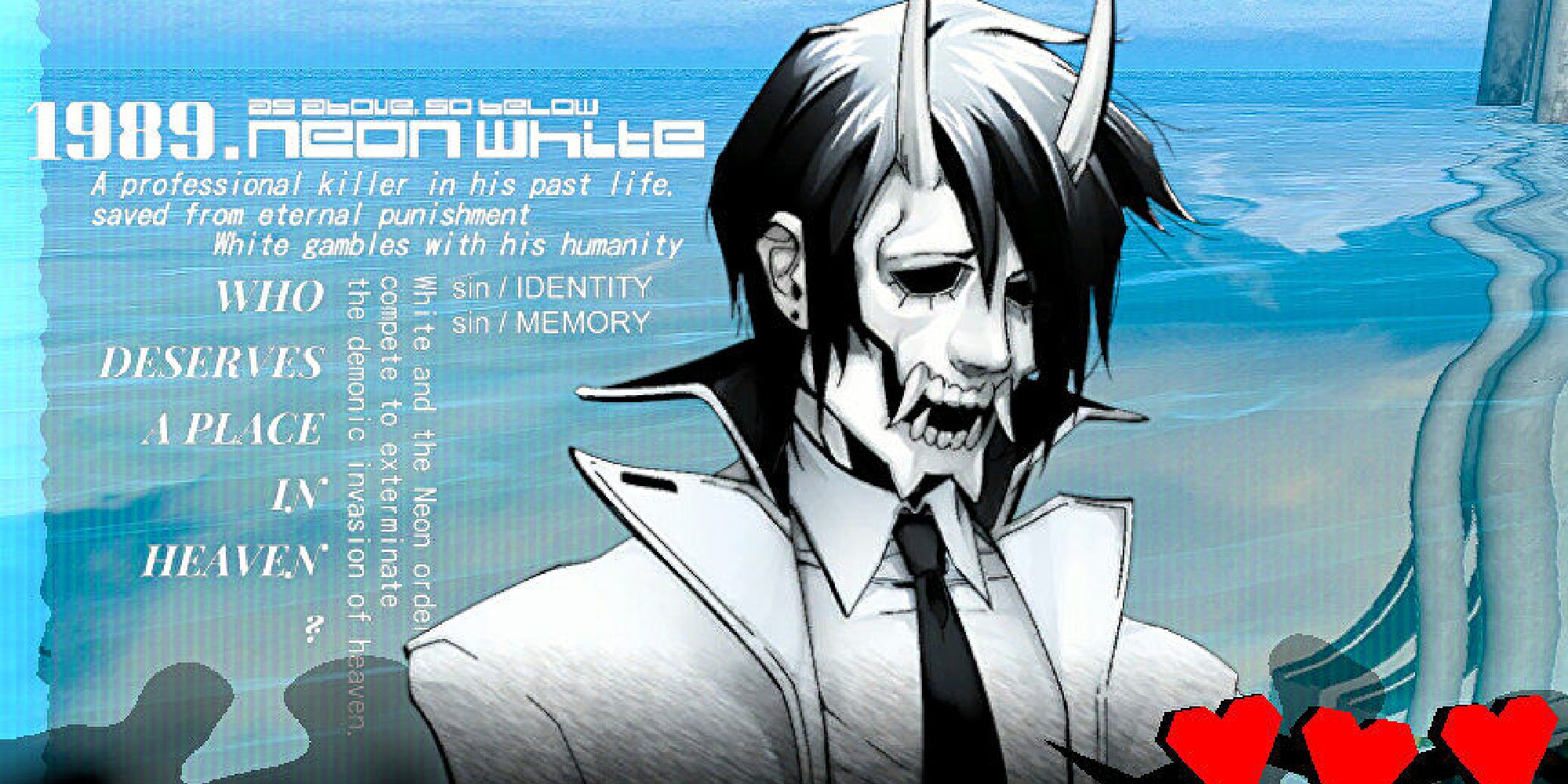 In a game as stylish as Neon White, it's truly a testament to the strong level design that White himself can simultaneously feel like both the Everyman and one of the coolest people in the room. It can be argued that he's got the most impressive mask among the Neons, with its intimidating horns and fangs helping to balance out his relatively understated white and black outfit.

It's hard to throw around the word "subtle" about a man wearing a Shinto mask and an all-white suit jacket, but somehow, White pulls it off. Like the rest of the game's characters, his look and feel are reflections of his personality, as he's usually the most reasonable member of the group. Unless Red's there. 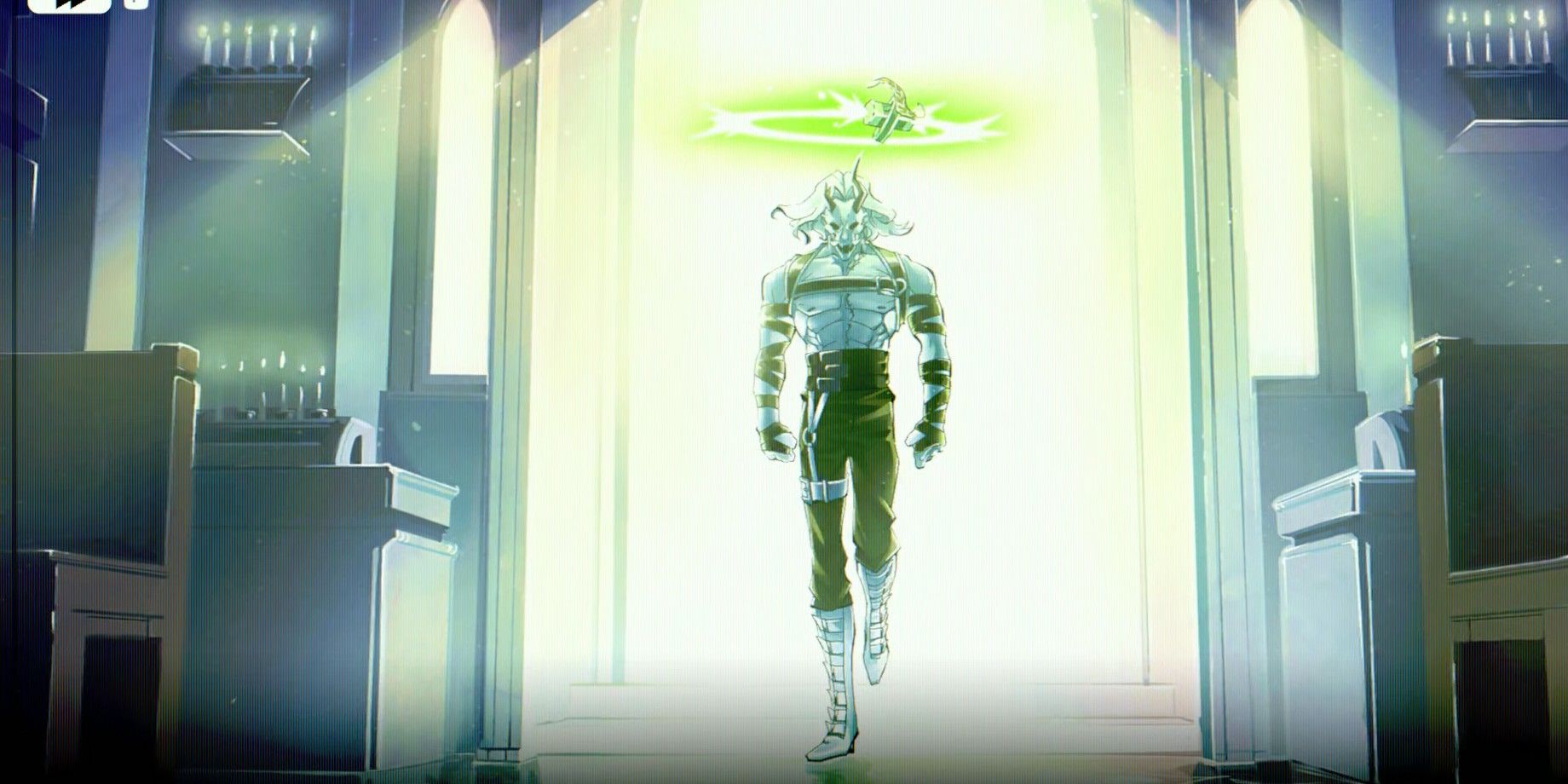 Neon Green looks like trouble in the absolute best way. First appearing with the Believers, he says a great deal without uttering a single word, making a clear and intimidating first impression on everyone in the room. He successfully comes across as unpredictable and dangerous throughout the entire game.

Green's mask feels like an elaborate version of White's look, with huge black horns and fangs that could cut through the tension he is obviously bringing with him anywhere he goes. The black straps he wraps around his torso don't do much to hide his imposing figure, but we're guessing that's the point.

Of all the Neons present in the game, Neon Red's look feels the most well-rounded and complete. The heart shape in her incredible fox mask, her flowing red hair and red leggings, and even the enormous sniper rifle she carries around all lend themselves to showing off a different aspect of her character.

Red is equal parts deadly, alluring, mysterious, and confident, and you'll pick up on most of that with one glance in her direction. If you're anything like Neon White, you'll be itching to know more about her the second you lay eyes on her. Just try not to find yourself sitting between her crosshairs.