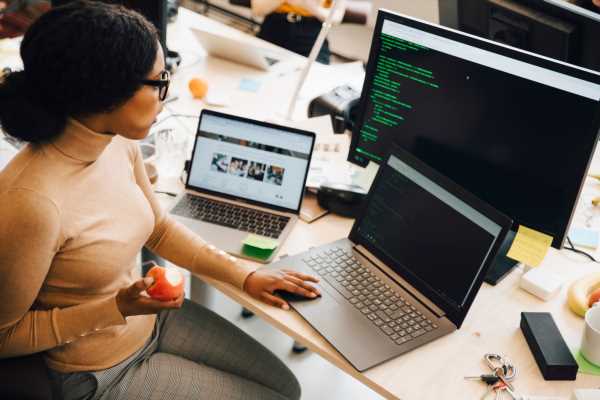 There’s been a lot of discussion about how we see few women of color in tech because there are few of them in the STEM pipeline. But a forthcoming study my team conducted as part of the Kapor Center’s Women of Color in Computing Collaborative shows that the pipeline is only part of the problem. We found robust evidence of bias, which was associated with women of color in tech being the equivalent of 37.6 percentage points less likely than white women to see a long-term future for themselves at their companies. Women of color in tech were also 16.4 percentage points more likely than white women to report that they have left or considered leaving a company because of its culture.

Here’s the bottom line: Tech is less of a meritocracy than we like to think. Women of color were dramatically more likely than white women to report bias in hiring, assignments, promotions and compensation, performance evaluations, and access to sponsorship network. Our prior study found that white women engineers were dramatically more likely to report bias in workplace systems than white men.

Before I dip deeper into the study’s findings, an important note on the study itself: We had 216 responses to our 10-minute survey that used Likert-scale and open-ended questions designed to pick up how bias plays out in the workplace. It ran from December 2019 to May 2020 and was supplemented by qualitative data from 11 one-on-one interviews. The survey was open to all women in tech, and we promoted it via affinity groups, alumni groups, and employee ERGS, and our team’s personal networks. The racial/ethnic breakdown was: 10.6% white, 28% Black or African American, 40% Latinx or Hispanic, 28% East, South, or Southeast Asian, 21% Multiracial, 12% Native American, Alaska Native, and other underrepresented groups. (Note that this adds up to more than 100% — individuals who selected “multiracial” and also specified racial/ethnic groups are counted more than once as are some individuals who selected a racial group and indicated their ethnicity.) 68% were individual contributors, 23% were managers, and 9% held other tech roles. While the sample sizes for this survey were small, our group has previously collected data using the Workplace Experiences Survey from approximately 18,000 individuals in different industries. This existing data gave us a useful baseline to understand how the experiences of women of color in computing compare on average to women of color in other industries (letting us know that women of color in computing are reporting high baseline levels). At the same time, we were able to compare the effect sizes of the differences between white women and women of color, and among women of color in different racial/ethnic groups, in the current study to the average effect sizes of the differences we find in other industries. This approach allows us to understand what the data for this study are saying, even if we are unable to conduct null hypothesis significance testing.

A key recurring theme in the responses we got from our latest survey was that women of color in tech have to put in a lot more work than their colleagues do. Women of color in tech were 39.3 percentage points more likely than white women to spend more time than colleagues do on DEI work. Typically, this is work that isn’t part of their job description. Some women of color we spoke to had even been handed all of HR to do on top of their regular jobs, and others were treated as de facto office managers — only to find their performance assessed based solely on their job-description jobs. Women of color also had to do more in their regular jobs to prove their worth, as well as more self-editing to make their colleagues comfortable with them. In short, women of color did a lot more work that is unpaid, unrecognized, and undervalued — which means less time and energy for highly valued work and life outside of work.

Women of color in tech reported higher rates of every pattern of bias. One powerful form is prove-it-again bias, where some groups have to prove themselves more than others. My team’s earlier study of US engineers found that about one third of white men said they had to prove themselves more than their colleagues, but nearly two thirds of women did. Our new study found that women of color had to prove-it-again at a rate 23.4 percentage points higher than white women. “I felt that I had to prove myself even more when it came to saying I could help out on the project. ‘I know what I’m talking about.’ Even doing things like showing up to work early, [working during] lunch break …,” one Black respondent reported. Notice how bias meant that she literally had to work longer hours than her colleagues.

Prove-it-again bias also plays out in tech specs. “For tech specs developed by men, it seems like they don’t mind if they don’t include as much detail, but any technical spec I’ve seen created by a woman on my team has always had an immense level of detail,” said a Latina respondent. Women of color were 24.7 percentage points more likely than white women to say they had to put in extra effort to be perceived as team players. They also were more likely to say their mistakes matter more, their successes matter less, and to be assumed incompetent. “I was testing one of our mobile apps … and he immediately launched into how to properly test it … And I had to cut him off midsentence and say, ‘I’m a software engineer, you do not need to explain how to take a screenshot to me,’” said a Native American respondent.

You might assume that the stereotype that “Asians are good at STEM” would help women of Asian descent. Not so. In fact, Asian women were particularly likely to report that they are seen as less qualified even when they have the same credentials as their colleagues.

Another pattern of bias is the tightrope, which reflects that white men typically just need to be authoritative and ambitious to succeed, while other groups face the far trickier task of being authoritative and ambitious in ways that colleagues see as “appropriate.” Often this entails walking a tightrope between being seen as “too meek” and “too much.” “When I do say something, you have a problem with the way I say it. When I don’t say anything, then you have a problem that I’m not saying it,” said a Black respondent. A 2016 report of women in Silicon Valley found that 84% of those surveyed reported being labeled as “too aggressive.” Women of color, we found, were 29.4 percentage points more likely than white women to report that, when they had business disagreements with coworkers, their behavior was misinterpreted as anger or hostility. “I wasn’t angry, I just wasn’t deferential,” said a Latina in our prior study of women in STEM. All this means that women of color need to be politically savvier to succeed: “When I have a strong opinion about something, I take special care in choosing my words,” said a Native American respondent.

Tightrope bias also affects access to plum assignments. In our prior study of US engineers, 85% of white male engineers but only 43% of Black women reported the same access as colleagues had to the best assignments. Women of color were 19.8 percentage points less likely to report fair access to desirable assignments than white women, and 18.4 percentage points less likely to report that they had fair access to opportunities to develop and present creative ideas.

All this affects promotions. A 2021 study that combined elements of tightrope and prove-it-again found that bias explained 30 to 50% of the gender promotion differential between men and women.

In prior studies of other industries, we have found that women of color encounter maternal wall bias — gender bias based on motherhood — at about the same rate as white women. However, in tech, women of color were 16.7 percentage points more likely than white women to say that having children changed colleagues’ perceptions of their competence and commitment. Motherhood triggers strong negative competence and commitment assumptions that can lead to hyperscrutiny: “Nobody here at work tells you, you have to quit your job… . But, in reality, what women deal with is somebody giving them a look when they are not at their desk for a couple of hours,” said a Black respondent.

Maternal wall bias can result in networking and other choice opportunities drying up. A Black woman’s manager regularly played golf with his white male direct reports, but when she asked to be included he said, “Oh, I know you like to leave on time to get home with your kids.” Women of color also reported likely-illegal behavior like penalizing women for taking maternity leave: “I pointed out to [my supervisor], well, I’ve accomplished more in these 10 months than I did in the previous 12, so why is my ranking lower? And her response was, ‘Well, out of sight out of mind.’”

To fix all this will take more than a sincere conversation. It will take companies willing to adopt a sustained, evidenced-based approach to interrupting bias in both everyday workplace interactions and business systems. To address structural racism requires structural change. One starting place: Tech workplaces need to stop dumping DEI, HR, and office management onto women of color. When women of color do DEI work, they need to be provided with sufficient administrative support so that all they need to do is the initial contact with someone who is coming to give a talk or sit on a panel, not the million follow-up tasks. Success in DEI work also needs to be rewarded equally with success in accomplishing other work tasks. That’s a “bias interrupter”– a process change designed to interrupt bias.

Actions have consequences. Tech companies need to take a closer look not just at the pipelines of talent flowing into their company but at creating conditions for women of color to thrive. An easy way to do that is to measure how they fare on promotions and compensation as well as performance evaluations. Bias and perceived fairness in workplace systems accounted for 67% of the variation in women of color’s career satisfaction, 66% of the variation in a sense of belonging (with unfairness in promotions most strongly linked), and 59% of the variation in intent to stay with their employer. Next step? They leave.

Joan C. Williams is a Distinguished Professor of Law and Director of the Center for Work Life Law at University of California Hastings Law. Her most recent book is Bias Interrupted: Creating Inclusion for Real and For Good.