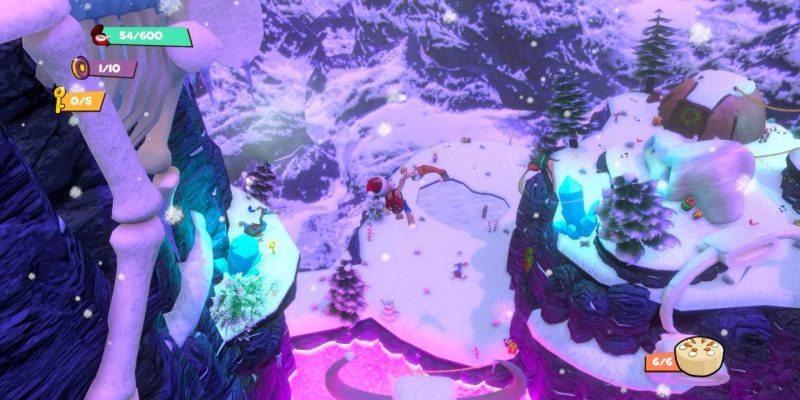 Publisher Numskull Games and developer Dinosaur Bytes have released a new trailer for its nostalgic platformer, Clive ‘N’ Wrench, showcasing what to expect in the Christmas World level of the game.

This trailer arrives alongside news that the 3D platformer inspired by the likes of Spyro the Dragon and Jak & Daxter will get a retail release in the U.S. and Canada as well as a retail release in a “number of international retailers in February 2023 alongside its European launch.” The game will be available digitally as well on PlayStation 5, PlayStation 4, Switch, and PC via Steam and GOG. Physical releases will include standard and collector’s editions on PlayStation and Switch.

Check out the new Christmas World showcase trailer below:

“No 3D platform is complete without an ice world and Clive ‘N’ Wrench takes that to eclectic levels with Iceratops, the game’s very own prehistoric winter wonderland,” a press release reads. “Mixing together Christmas cheer and the demise of the Dinosaurs, Clive ‘N’ Wrench are in for a challenge if they want to collet all the pocket watches and Ancient Stones the world has to offer.

Check out screenshots from the game below:

“Clive ‘N’ Wrench is a brilliantly crafted 3D platforming paradise full of challenges, collectibles, and charismatic characters,” the press release reads. “Starring Clive the rabbit and best friend Wrench, the monkey on his back, players will jump, roll, hover, and spin their way through time and space in a magical 1950s refrigerator on a heroic quest to thwart the tyrannical Dr. Daucus.”

Clive ‘N’ Wrench will feature 11 levels taking the titular characters through prehistoric winter wonderlands, ancient Egypt, the Wild West, and more. An official release date has not been revealed, but it’s due out in February next year.

Are you going to check out Clive ‘N’ Wrench next year? Let us know in the comments below!