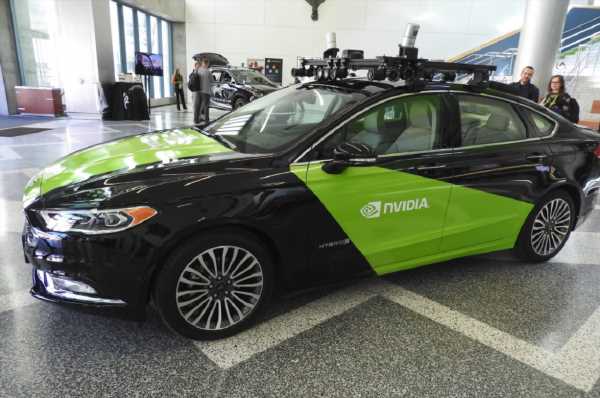 An MIT report estimates truly autonomous vehicles might not hit the streets for a decade. Still, some experts predict the pandemic will hasten the adoption of autonomous transportation technologies. Despite needing disinfection, driverless cars can potentially minimize the risk of spreading disease. Allied Market Research predicts that the the global autonomous vehicle market will be valued at $556.67 billion by 2026.

Atlan, which integrates an Nvidia BlueField data processing unit for networking, storage, and security functions, is 4 to 33 times as powerful in terms of compute as Nvidia’s other autonomous driving-focused chips, Drive Xavier and Drive Orin. Xavier can reach up to 30 TOPs, while Orin tops out at 254.

“Our new Atlan is truly a technical marvel, fusing all of Nvidia’s strengths in AI, auto, robotics, safety and BlueField-secure datacenters to deliver safe, autonomous-driving fleets,” Huang said in a press release. “The transportation industry needs a computing platform that it can rely on for decades. The software investment is too immense to repeat for each car.”

Nvidia also announced it would expand its partnership with Volvo to use Orin in upcoming Volvo models. The first car featuring the chip will be the XC90, scheduled to be revealed next year, which will leverage software developed by Volvo’s Zenseact subsidiary, as well as backup systems for steering and braking. A Xavier-powered server will manage core functionalities inside the car, like energy management and driver assistance, while Orin will handle vision and lidar sensor data processing.

Nvidia and Volvo began collaborating in 2018, when Volvo agreed to use Xavier for the computers in cars built on its scalable product architecture (SPA2) platform. SPA2 ships with an autonomous driving feature, Highway Pilot, that can be activated in supported locations and conditions.

The 8th-gen Hyperion will be available later in 2021.