Omocat's psychological horror/quirky JRPG hybrid Omori has finally made it to consoles. After years stuck in development hell, the PC version of Omori was released at the tail end of 2020, and the game quickly amassed a cult following for its mixture of disturbing themes, cutesy art, and a killer soundtrack.

Now, the console rerelease gives a whole new set of players the chance to be irreparably scarred by Omori's myriad of horrors – but if you make the right choices, you might just make it out of the game alive. Which ending is the best, and which is the most horrific? Before you read on, please note that many of Omori's endings depict suicide and similar topics, so proceed at your own discretion. 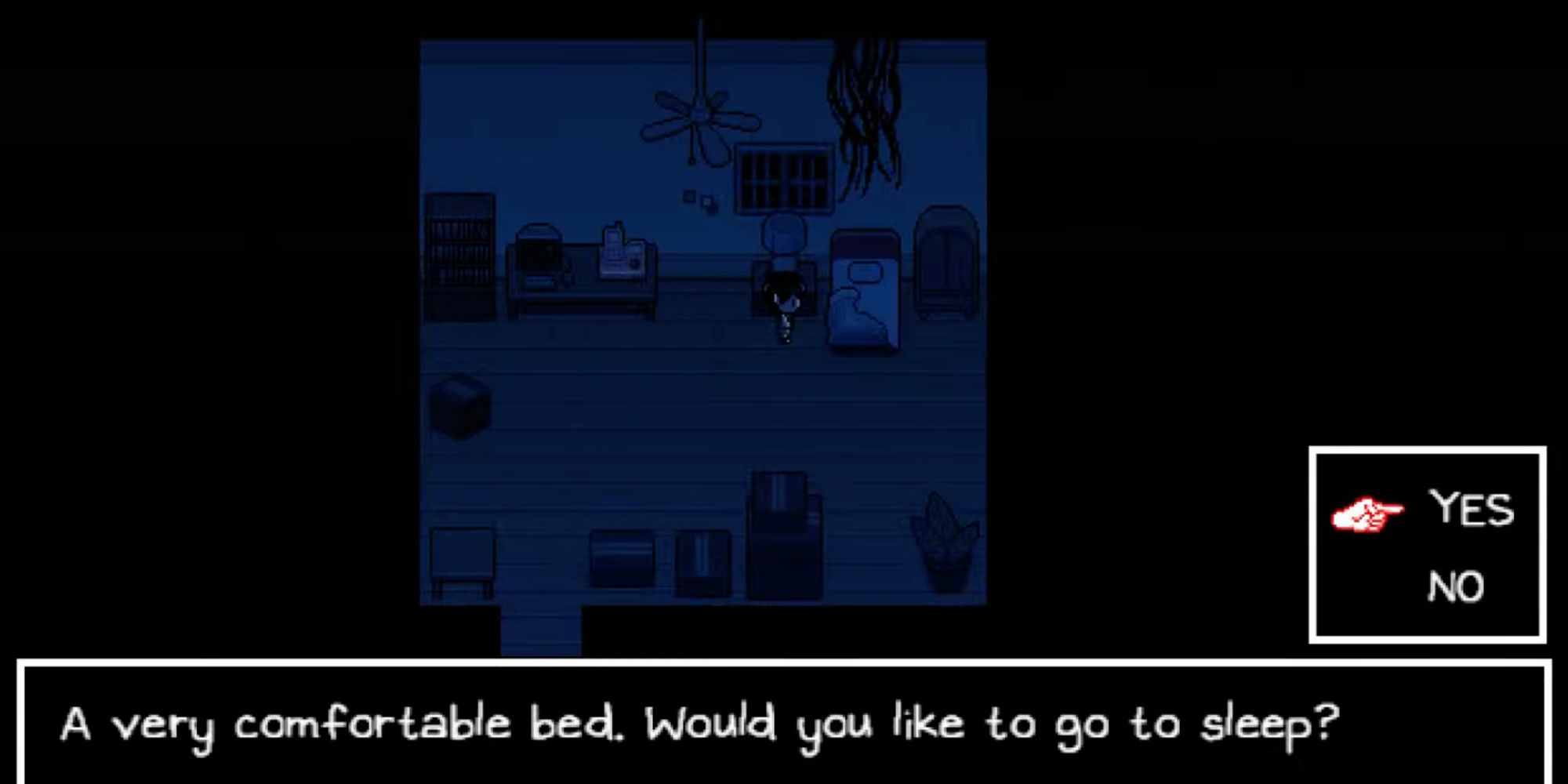 Your choices during the final sequence of Omori will determine which ending you receive. During this part of the game, Sunny will spend his last night in Faraway Town at Basil's house with Kel, Aubrey, and Hero in tow. Sunny will have a dream that reveals the truth about what happened to his sister, Mari: during an argument, Sunny pushed Mari down the stairs, accidentally killing her. Basil, who witnessed the incident, came up with the idea to stage Mari's death as a suicide, and the two boys are irreparably damaged from their actions.

When Sunny wakes up from his dream, you have several choices. If you decide to head home or go back to sleep, you will be locked into one of the two neutral endings. In both of these endings, Basil will commit suicide; if you go back to sleep at Basil's house and wake up again, you'll be able to talk to your friends, who are stricken with grief at his death. You can examine his room as well, but after doing so the door will disappear, symbolizing Sunny's lost chance at redemption.

The only way to advance the game is to return to Sunny's house and go to sleep. If you pick up a knife in the kitchen before going upstairs, then you'll receive the Knife Ending: Sunny will awaken in White Space, and the only way to leave is to use the Stab command from the menu. You'll see Sunny stab himself in his dream; when the game cuts back to reality, you'll see that Sunny has stabbed himself in the real world as well, and the game fades to black.

This is the game's most tragic, depressing ending, with both Sunny and Basil losing their lives. 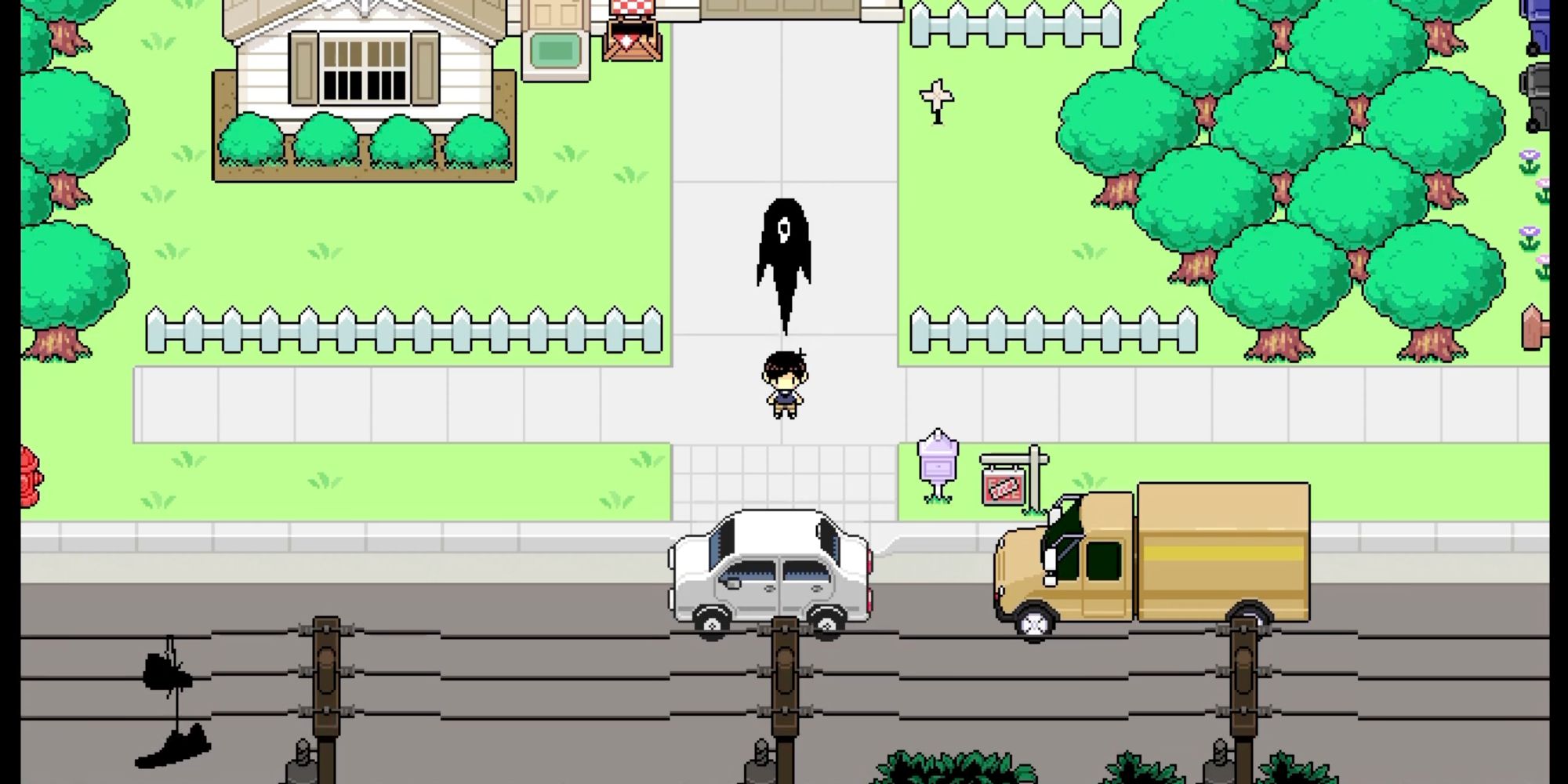 You'll access the Abandon Ending in much the same way as the Knife Ending. After waking up in Basil's house for the first time, you'll have to choose either to go back to sleep or to return to Sunny's house. Either way, Basil will die, and the door to his room will disappear.

But for this ending, you'll have to ignore the knife on the kitchen counter. Sunny will wake up in White Space and you can only exit by choosing the Stab command. But now Sunny will wake up on the day that he's set to move out of town. The only thing left to do is to walk out to Sunny's mother's car, which is idling by the curb. Get in and you'll drive away, leaving behind the tragedies in Faraway Town while sirens play over the end credits.

This isn't a happy ending either, but it gets an edge over the Knife Ending because at least one person survives. 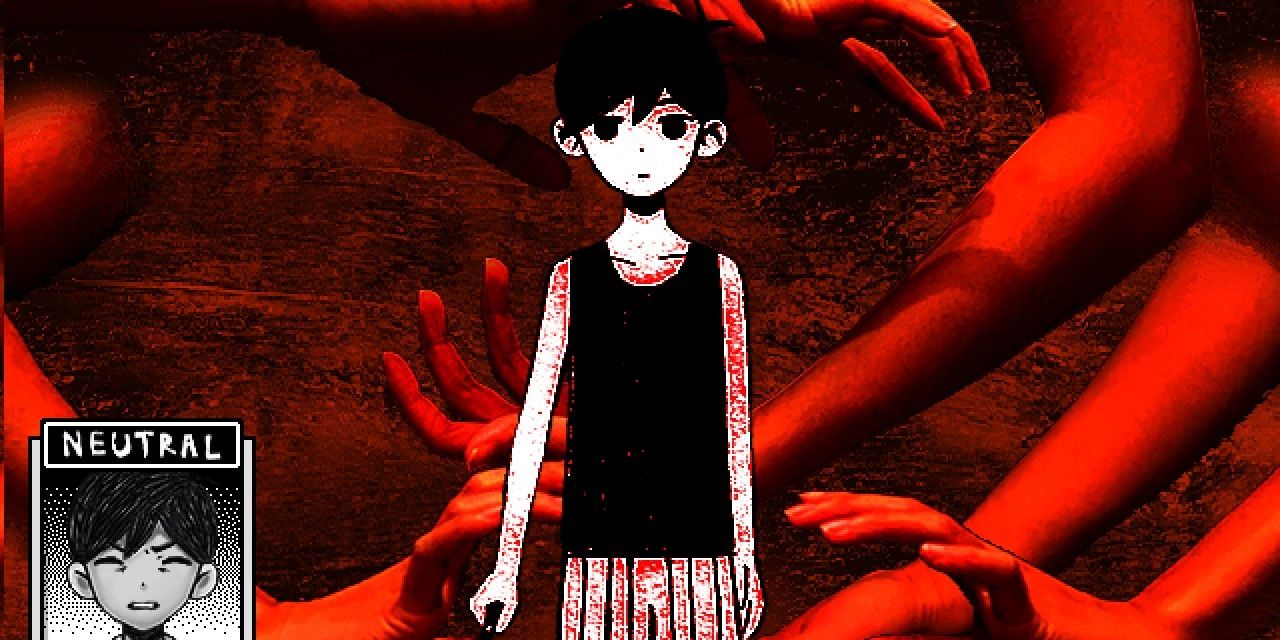 For the rest of Omori's endings, you can't leave Basil's house or go back to sleep after waking up the first time. Instead, you'll have to go to Basil's room, confronting the boys' trauma head-on. Sunny and Basil will fight until they both pass out. While Sunny is unconscious, he'll remember the good times that he had with Mari. Then he'll confront the final boss: Omori, the personality that Sunny created to protect himself from his memories.

The battle slowly becomes more unsettling and distressing until, finally, you won't be able to heal yourself; from here, Omori will always strike a mortal blow, sending you to the Game Over screen. Choosing not to continue will lock you into the Bad Ending.

In this ending, Sunny bows his head in defeat. Omori embraces him, and Sunny is subsequently erased from existence, symbolizing that Omori has taken over for good. Then you'll wake up in White Space. Instead of using the Stab command to exit, you'll find a door to the Neighbor's Room, where you'll meet up with Aubrey, Kel, and Hero as you did during the previous segments of the game.

But when you go up the stairs to exit the room, you'll find yourself on the balcony of the hospital, surrounded by fog. The only thing you can interact with here is a gap in the railing. Walking up to it gives you the option to jump, and the only way to finish the game is to select yes. The credits will play over an animation of Omori falling from the hospital as psychedelic backgrounds flash by and the game's unofficial theme song, "My Time" by Bo En, blares.

This is not a happy ending, but its surreal blend of emotions is memorably disturbing; and to top it off, it pays homage to Yume Nikki, one of the game's clearest inspirations. 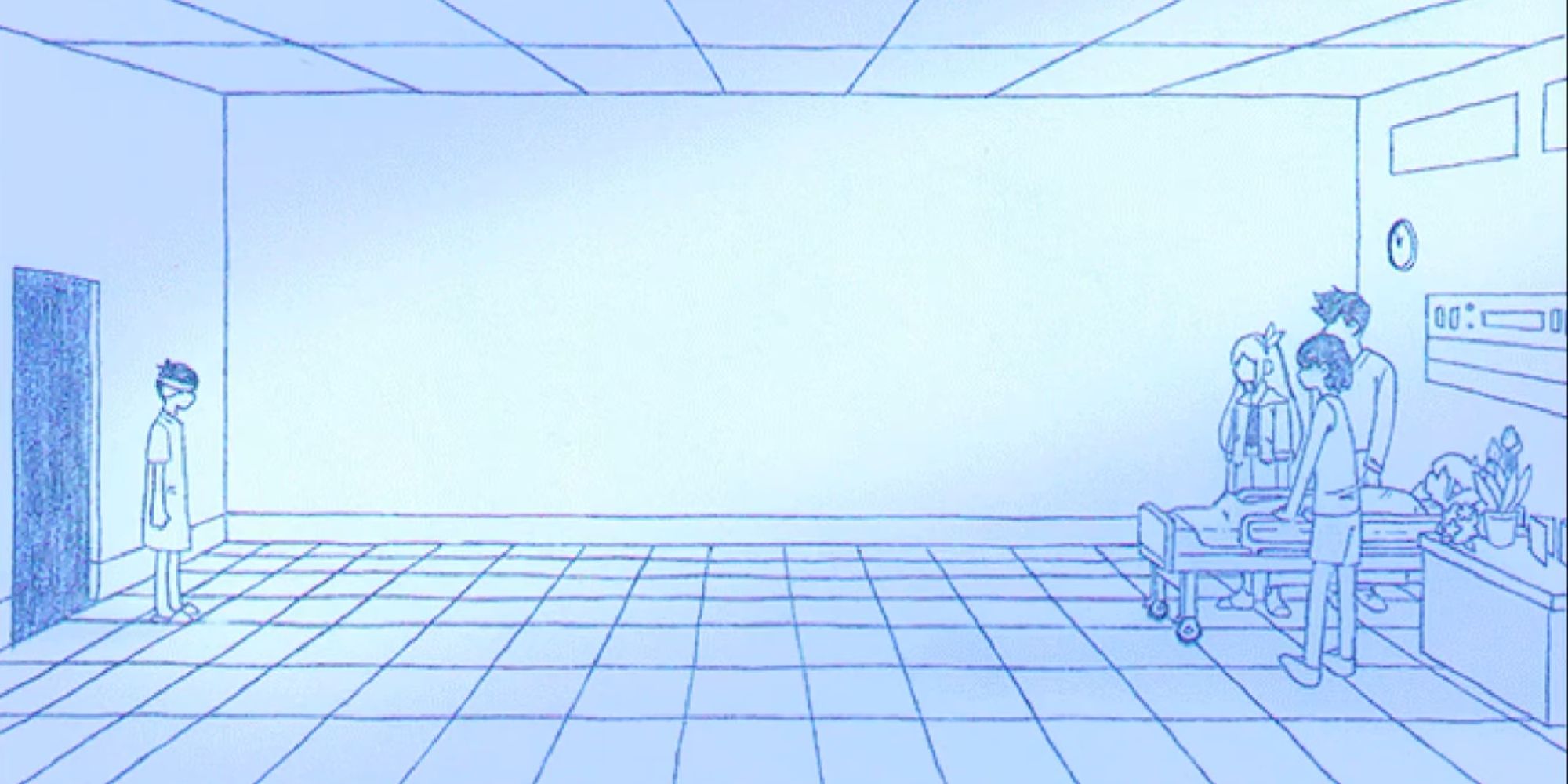 To get the Good Ending, you'll have to fight Basil after waking up in his house for the first time, proceed through Sunny's memories to the final boss with Omori, and then die to reach the Game Over screen. If you choose to continue, then you'll be able to see the Good Ending.

In this ending, Sunny picks up his violin and plays the duet he and Mari were going to play at her piano recital as Sunny's memories, good and bad, flash by on the screen. Sunny and Omori embrace and Omori disappears, symbolizing that Sunny has finally accepted the truth of what happened. Sunny then wakes up in his hospital bed covered in bandages and cries over Mari's death.

Finally, Sunny will visit Basil's hospital room, where Kel, Aubrey, and Hero are waiting. A short cutscene will play where Sunny says "I have to tell you something." And then the credits roll, showing Sunny's view from the backseat of his mom's car while an upbeat song plays.

Omori is ambiguous about whether the group will stay in touch after Sunny moves. But the Good Ending allows Sunny to move on, free from the burden of keeping such a terrible secret. 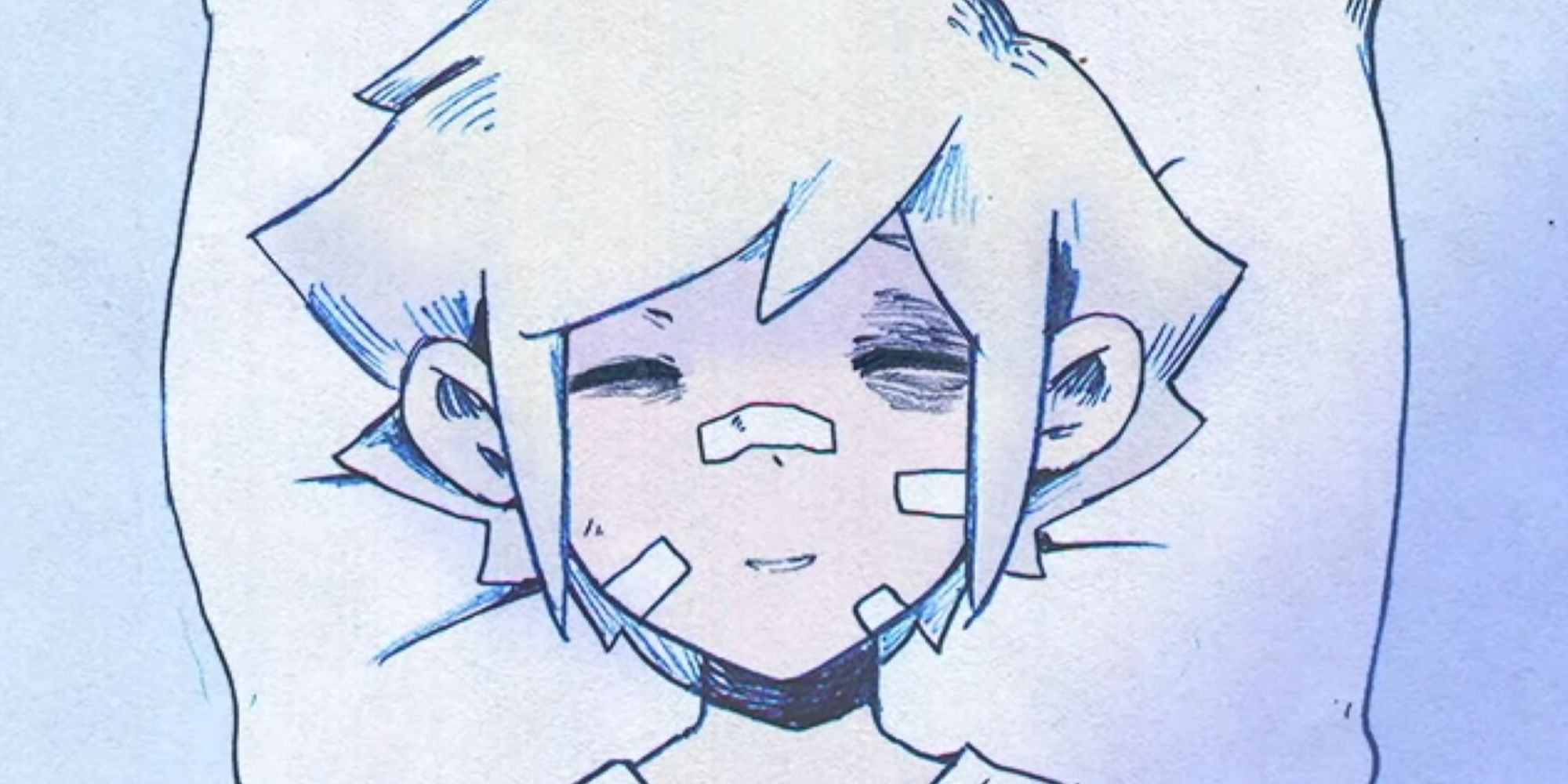 The Secret Ending is the only one that you'll really have to plan for throughout the game. In Headspace, Basil keeps a garden where he grows flowers symbolizing each character. You'll have to water the flowers every day, keeping the garden vibrant and beautiful, in order to receive this ending.

If you water the flowers and then proceed through the steps for the good ending, you'll receive a secret post-credits cutscene in which Basil wakes up in his hospital bed to see Sunny watching over him. The two smile at each other, and the ghostly apparitions that have been haunting them throughout the game disappear, symbolizing that both of them have found peace and are able to be friends again. After the torture that both Basil and Sunny have gone through over the course of the game, the Secret Ending confirms that the boys can finally let go of their pain.