Villains in Pokémon games are not exactly easy to get right, on one hand, they have to be villainous enough to work as antagonists in the player’s journey to become the very best, yet at the same time, every bad guy has to stay in line with Pokémon’s “E for Everyone” rating with schemes that are still easy to grasp for younger audiences.

Throughout the years, Pokémon villains’ motives have been all over the place, from Giovanni’s Team Rocket beginnings as a simple criminal organization to Ghetsis’ desires for world domination, evil manifests itself in all kinds of ways in Pokémon.

One force of evil unlikely to ever get much credit is Chairman Rose from Pokémon Sword and Shield, not the least because of fans’ reception of characters like him and Hop only added to the many controversies in this generation. As it turns out, one Reddit user took time to find one glaring flaw in Rose’s master plan, one that even the youngest trainer could have read on his Pokédex. 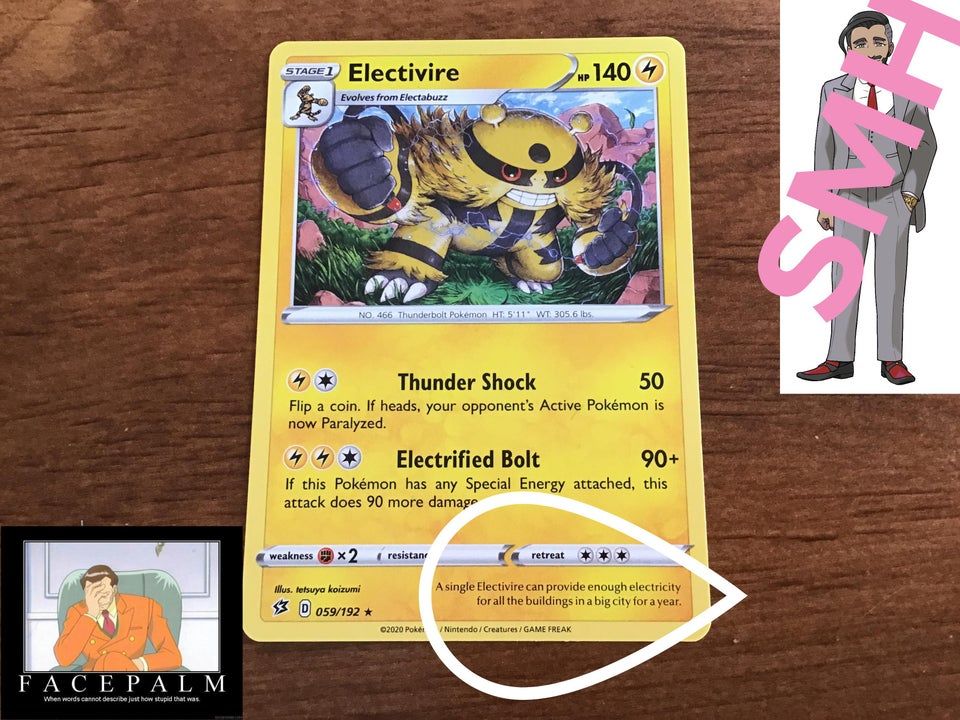 Taking Electivire’s card from the Rebel Clash expansion set, one can clearly read that a single evolved Electabuzz “can provide enough electricity for all the buildings in a big city”, thus rendering Chairman Rose’s entire plan of taming the almighty Eternatus in order to solve Galar’s future energy crisis even more puzzling and pointless than it already seemed to be in the games.

Some Pokémon lovers out there might pose the argument that using a bunch of Electivires for the sole purpose of extracting energy from them might no be the most humane thing to do. Perhaps Chairman Rose is just supposed to represent the efforts of tech company CEO’s growing ambition in modern-day society. Whatever the case, at least the writers achieved their goal of making Chairman Rose laughably evil.

One sure thing is that Pokédex entries have not exactly always been the most accurate source for Pokémon facts, with some of them being so absurd they challenge the very laws of physics, so perhaps Chairman Rose wasn’t that crazy after all.

MORE: Temtem Comes To PS5 This Week – As Someone With Over 50 Hours On PC, Here’s Why You Should Play It