Pokemon TCG Live is the hip replacement for the aging Pokemon TCG Online app, bringing not just a shiny new aesthetic into the mix, but some much-needed modern concepts. Concepts like the Battle Pass system, prolific in so many multiplayer games today, but (more or less) absent from Live's phasing-out predecessor.

We've been just as eager as y'all to see what's inside Pokemon TCG Live's inaugural Battle Pass, titled after the most recent expansion: Silver Tempest. As is to be expected, you'll get plenty of Silver Tempest cards as you work your way through. But what else is waiting in the wings?

Live is launching with built-in 'seasons', the ever-popular video game nomenclature for set periods of time during which a particular group of content is offered. The first season is entitled Silver Tempest, and it sports a Battle Pass that comes in both normal and Premium flavors. Importantly, players who elect to partake in the latter will still be accruing points for the rewards from the former as well.

The point behind Battle Passes in online gaming generally hovers around one or both of the following notions — they're either a way to get some cash from us, or a method to keep us around so that engagement rates with the service are suitably high. Since Pokemon TCG Live is blissfully devoid of microtransactions, The Pokemon Company International is clearly more concerned with the latter.

Humans are a predictable enough lot. The best way to keep us doing something repeatedly is to reward us in some fashion. Like most Battle Passes, Pokemon TCG Live's lets players earn prizes every time we go up a 'tier', consistently hitting us up with that lovely positive feedback loop we so crave.

Silver Tempest contains 50 tiers. We climb them purely by playing. Engaging in matches nets us points, but (again, as is rather common among Battle Passes), there are also Daily Quests to partake.

What's Inside The Battle Passes? 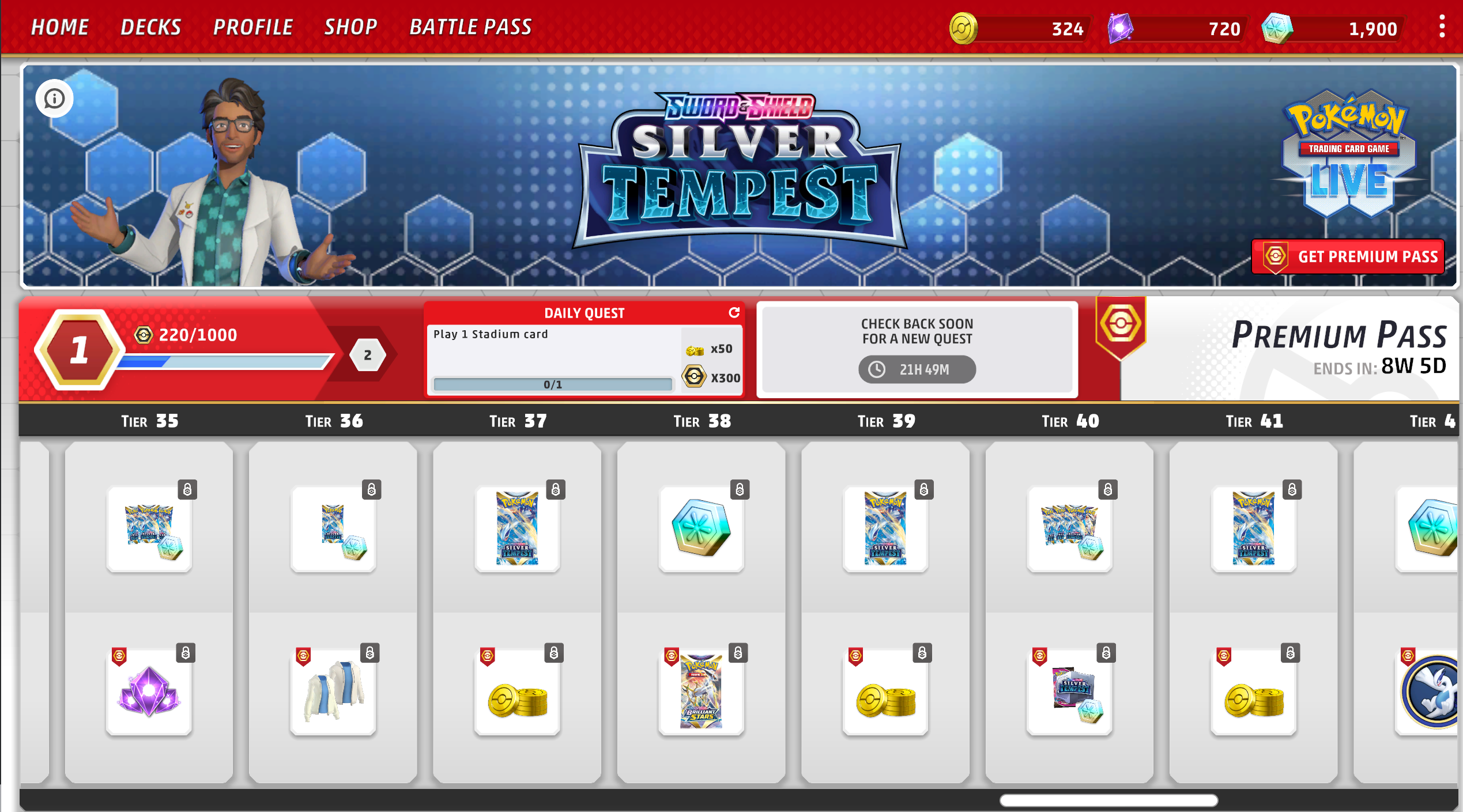 You can think of the Premium Battle Pass as doubling your content, and since you don't need to spend a real-world dime to do so (heck, you don't even have the option to do so), there's truly nothing arguably insidious about it. At least, as far as we're concerned. So yes, we strongly advise cashing in those crystals to get started with that second version ASAP!

The bulk of what you'll find is card-related, which, if we're being honest, it'd be a tad odd otherwise. Booster packs are the most prolific, though special cards like V Guard Energy will pop up as well. Such grabs are hot enough to warrant an immediate mull-over of any custom decks you've been constructing. 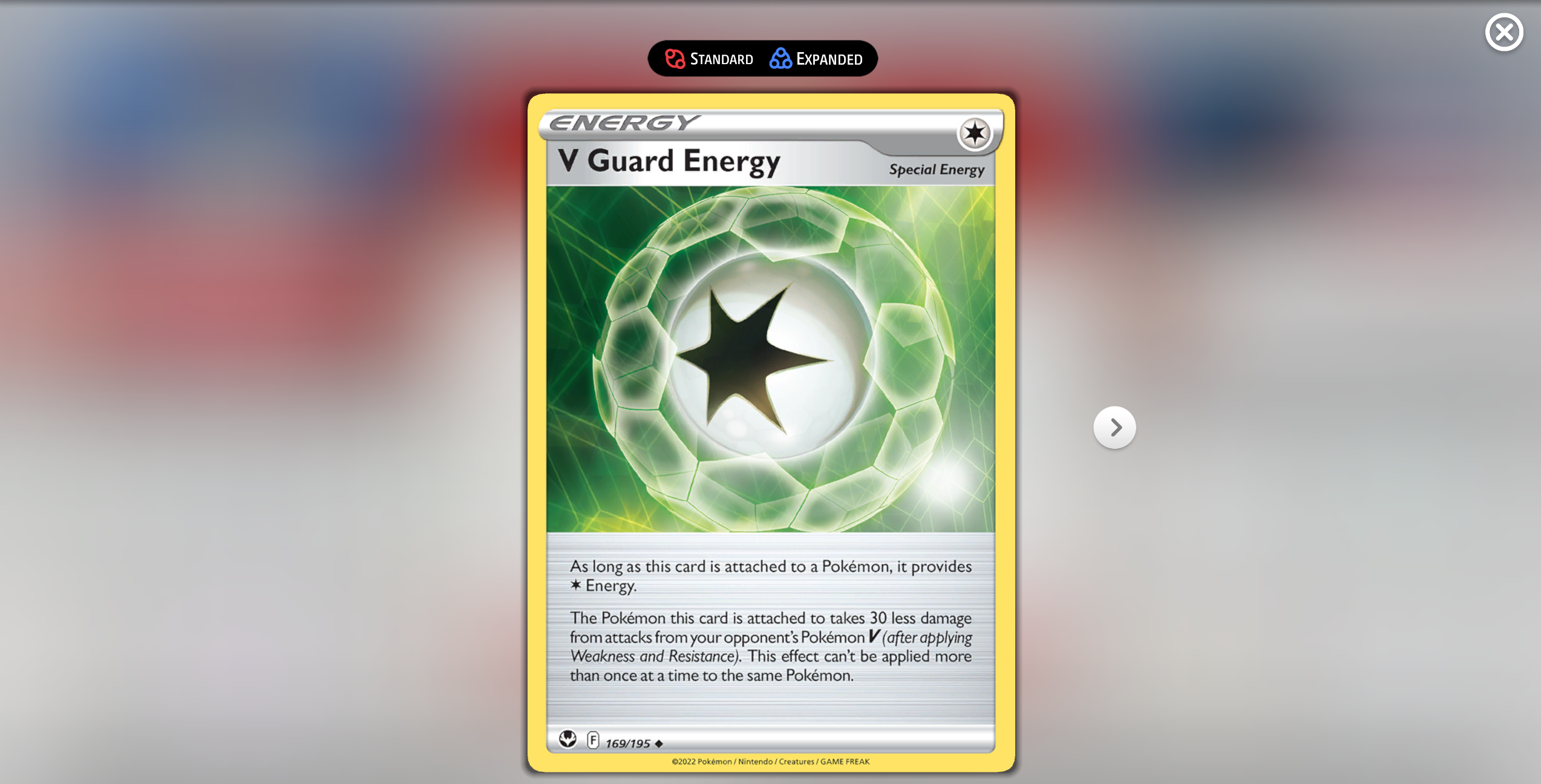 Fashion accessories, as well as further currency to fuel your more selective prizes, accompany the above. As it stands, that's the long and short of it, but with 50 tiers in each of the two Battle Pass categories, there's no better time to get started than right now, with plenty of weeks left on the clock.

But remember, Battle Passes are meant to supplement the inherent fun of gaming, including the Pokemon TCG. Don't get so sucked into the rewards spiral that you stop enjoying yourself!