The Pokemon TCG has several unique types of monster cards with unique rules that change the game. The current generation version of this is Pokemon V. These cards usually depict fully evolved pokemon, but they still count as basic Pokemon, meaning you can summon them right away without the need for evolution.

The drawback is that they give up two prizes and are not as bulky or strong as VMAX or VSTAR cards. Pokemon V act as the stepping stone to both of those bigger forms, so they're kind of irreplaceable in the current state of the game. Despite that, some of them are extremely powerful and have shaped the meta throughout recent years. 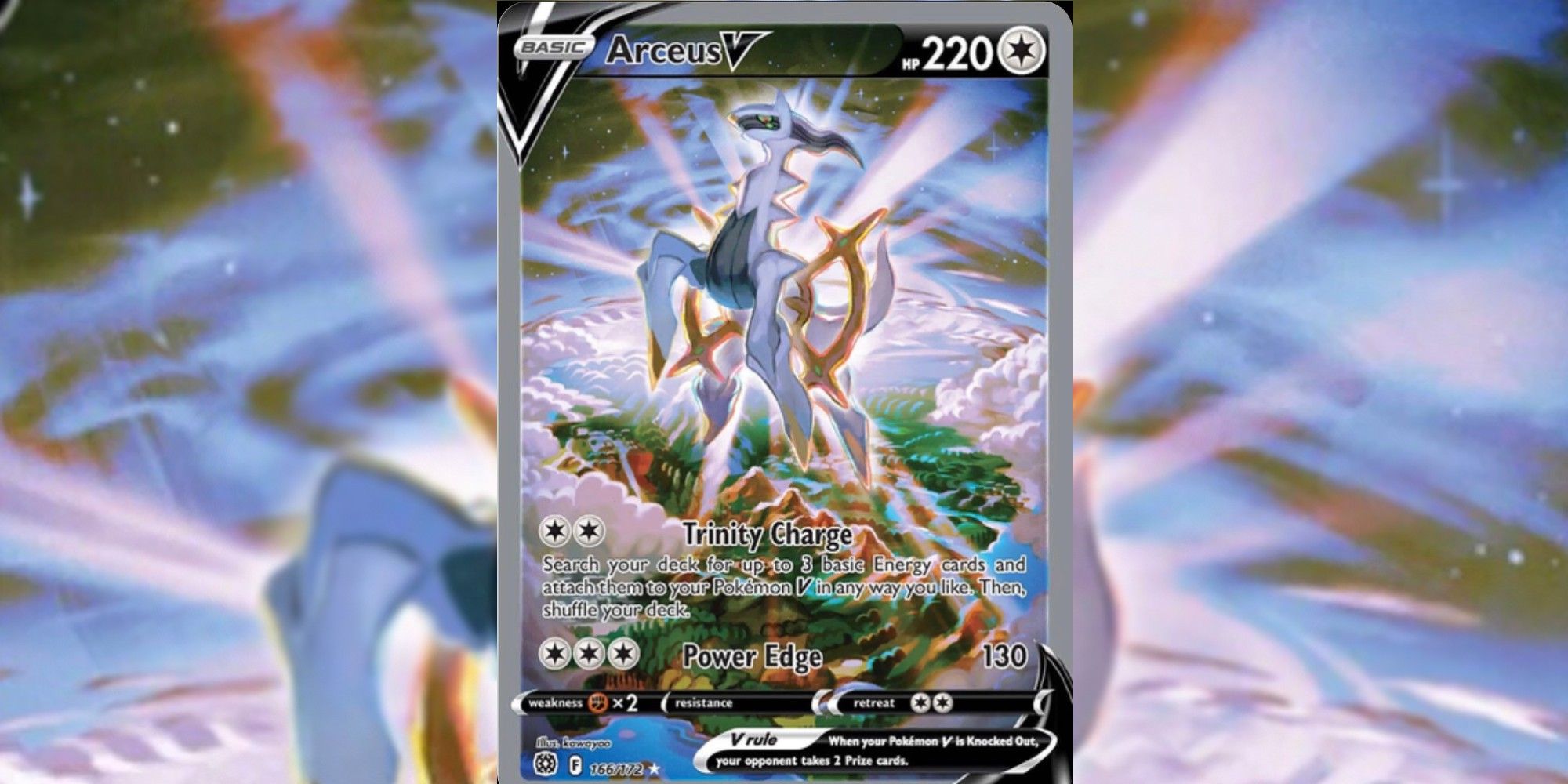 Arceus V is a decent card in itself. It has a decent attack in Trinity Charge, which attaches three energy cards from your deck to your Pokemon V. This is not a bad move for sure and can help get set up for more significant plays. However, what makes Arceus V amazing is that it is the stepping stone to getting an Arceus VSTAR on your field.

9 Lumineon V – To Get The Supporters You Need 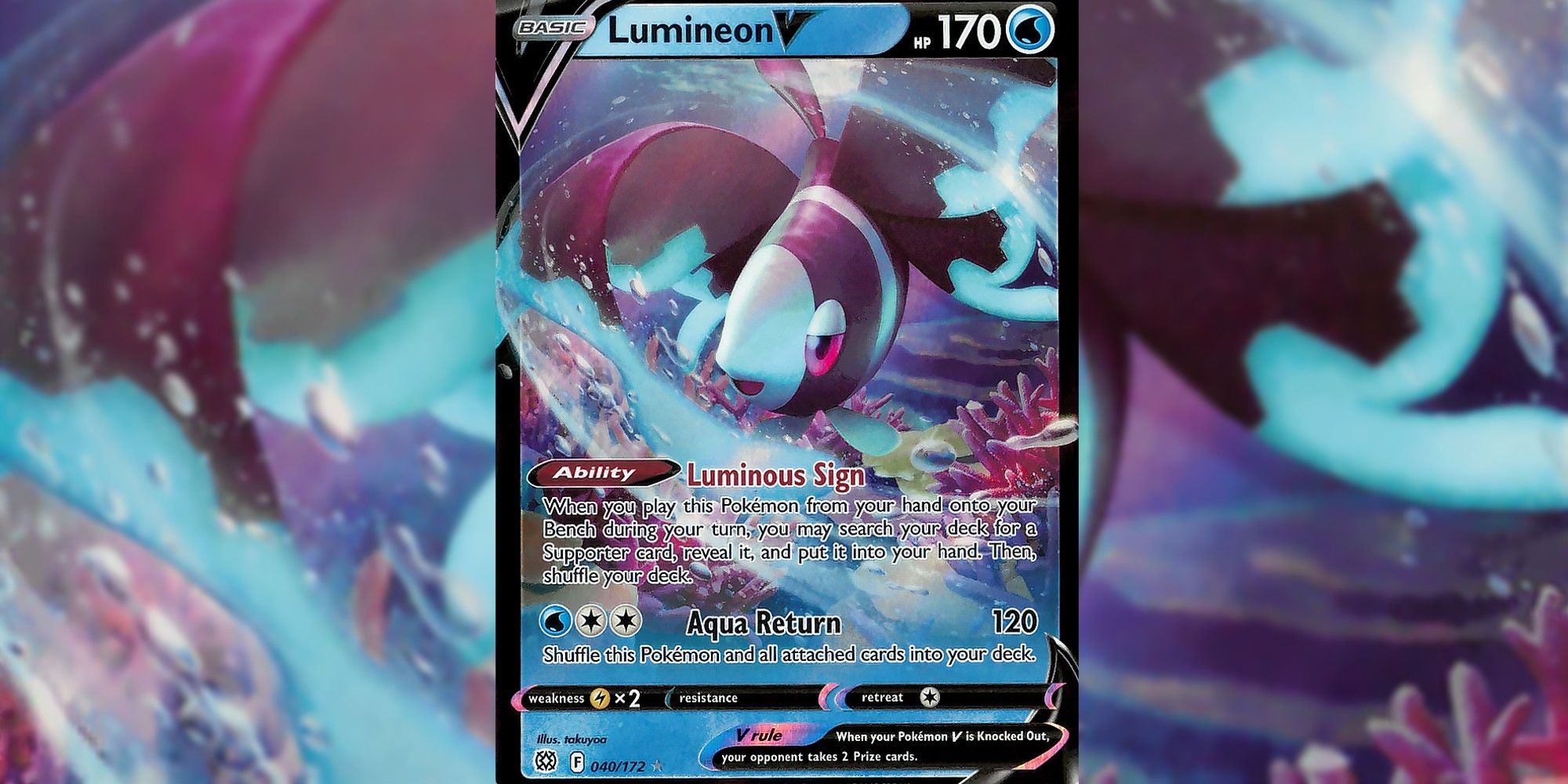 Lumineon V is a great utility Pokemon to add to your deck. That is to say, its offensive capabilities leave a little bit to be desired, but its ability surely makes up for it. The ability in question is Luminous Sign, which allows you to search your deck for a supporter card and add it to your hand.

Considering how powerful current supporters are and that many decks draw many cards just to reach one, easily adding one to your hand is great. Lumineon V also has a decent attack that helps you pivot it out in a pinch and not give up free prizes to your opponent.

8 Vikavolt V – Lock Your Opponent Out Of Item Cards 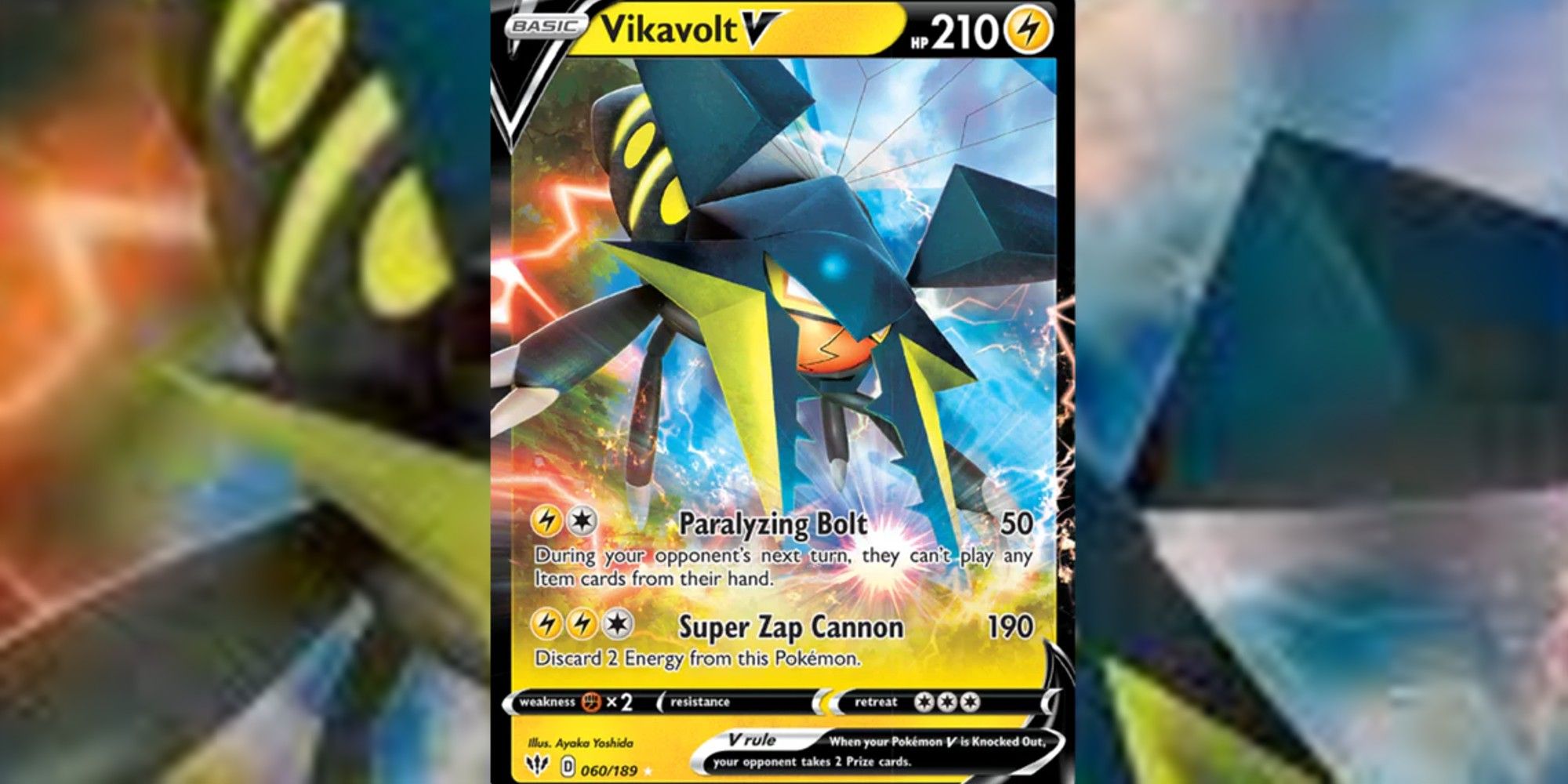 Vikavolt is one of the few Pokemon in this list that has nothing to do with draw power. It is still a menace, though. Its attack Paralyzing Bolt locks your opponent out of using any item cards for a turn. Considering how many decks use items to set up their attacks, this can be truly disruptive.

While its weakness to the Fighting-type and high retreat cost keep it from being great, its damage output is also great,with Super Zap Cannon doing 190 damage. 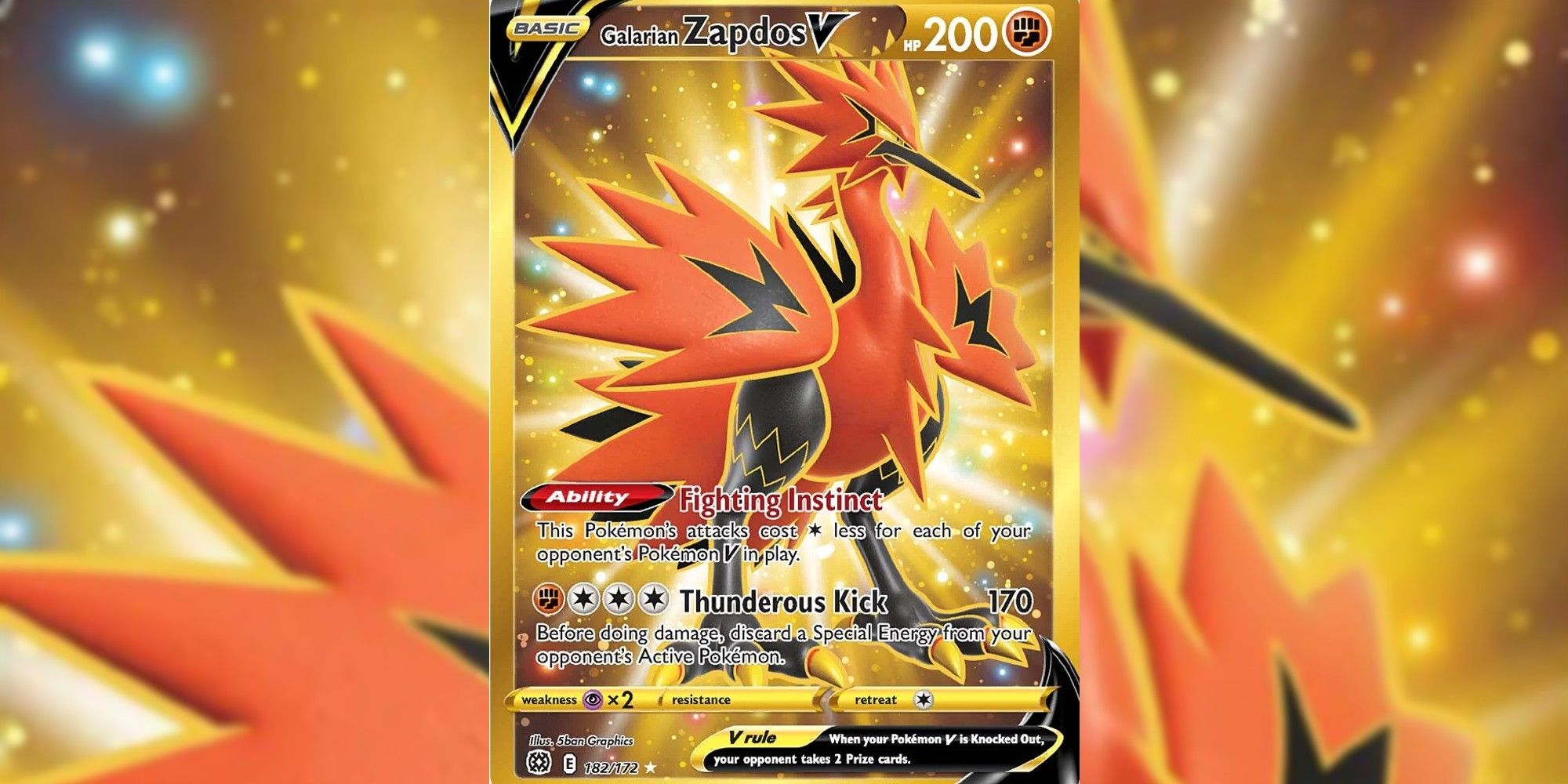 This Fighting-type regional form is a pure attacker, but it's pretty great at its job. Its ability, Fighting Instinct, lets it attack for one less energy for each opposing Pokemon V. This is huge, considering that many top-tier decks in the current format run several utility-focused and offensive Pokemon V, ranging from Mew to Zacian.

Pokemon V are the majority of the current meta; thus, your Galarian Zapdos will be able to attack for relatively cheap consistently. Adding to that, its attack Thunderous Kick makes your opponent discard a special energy from their active pokemon. Since special energies are also quite common, Galarian Zapdos V is a great anti-meta pick. 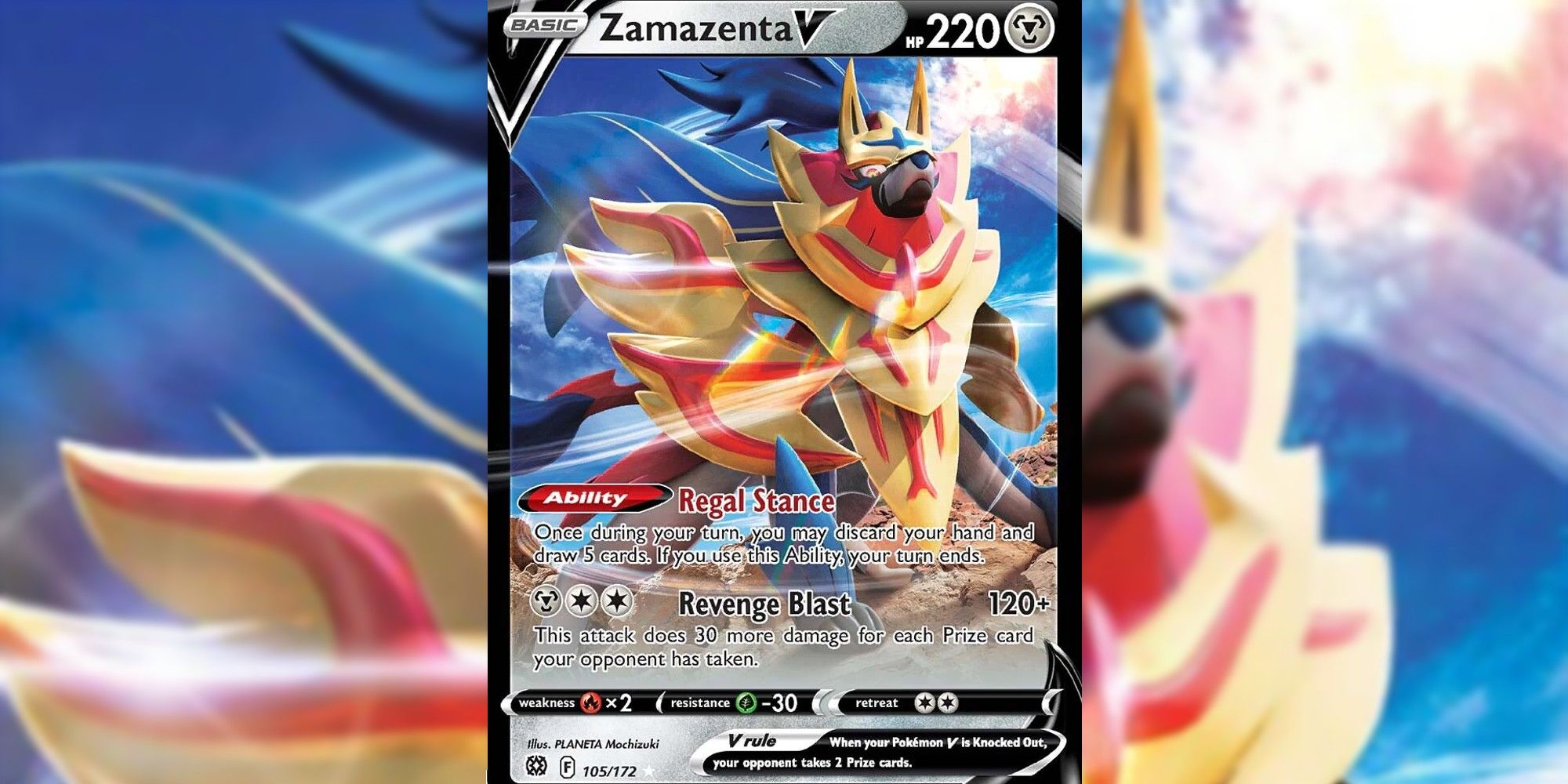 Adding to the line of strong draw effects, we have Zamazenta V, specifically from the set Brilliant Stars. The Zamazenta V from the base Sword and Shield set is no slouch either, potentially making your opponent's VMAX Pokemon useless. However, the Brilliant Stars Zamazenta V is just as good, if not better.

With its ability Regal Stance, you can discard your hand and draw five, which ends your turn. This is a remarkable ability to help you set up in the early game and get the cards you need. Its attack Revenge Blast is also pretty good, giving you colossal damage potential in the late game. 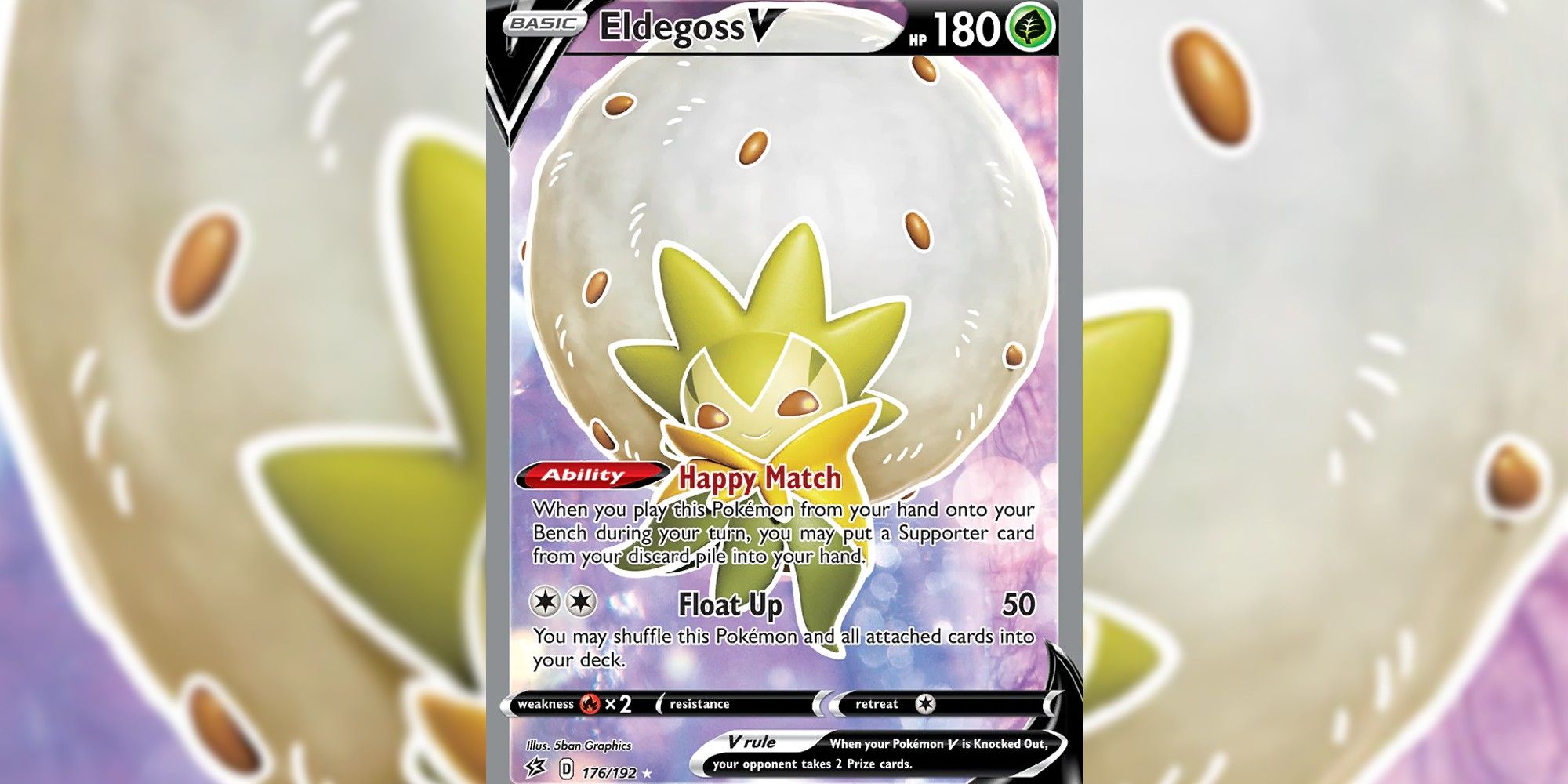 There are already several Pokemon with effects that either get you to supporters or are equivalent to supporters. Eldegoss V is in the same vein as those Pokemon. With its ability Happy Match, when you place Eldegoss onto your bench, you can add a supporter from your discard pile to your hand.

This means instant access to any key supporters you have already used but need more of. Eldegoss may not be a great attacker, but its recovery ability and the utility of getting shuffled back into the deck with Float Up makes it a great tool in any deck.

4 Zacian V – One Of The Fastest And Deadliest Attackers 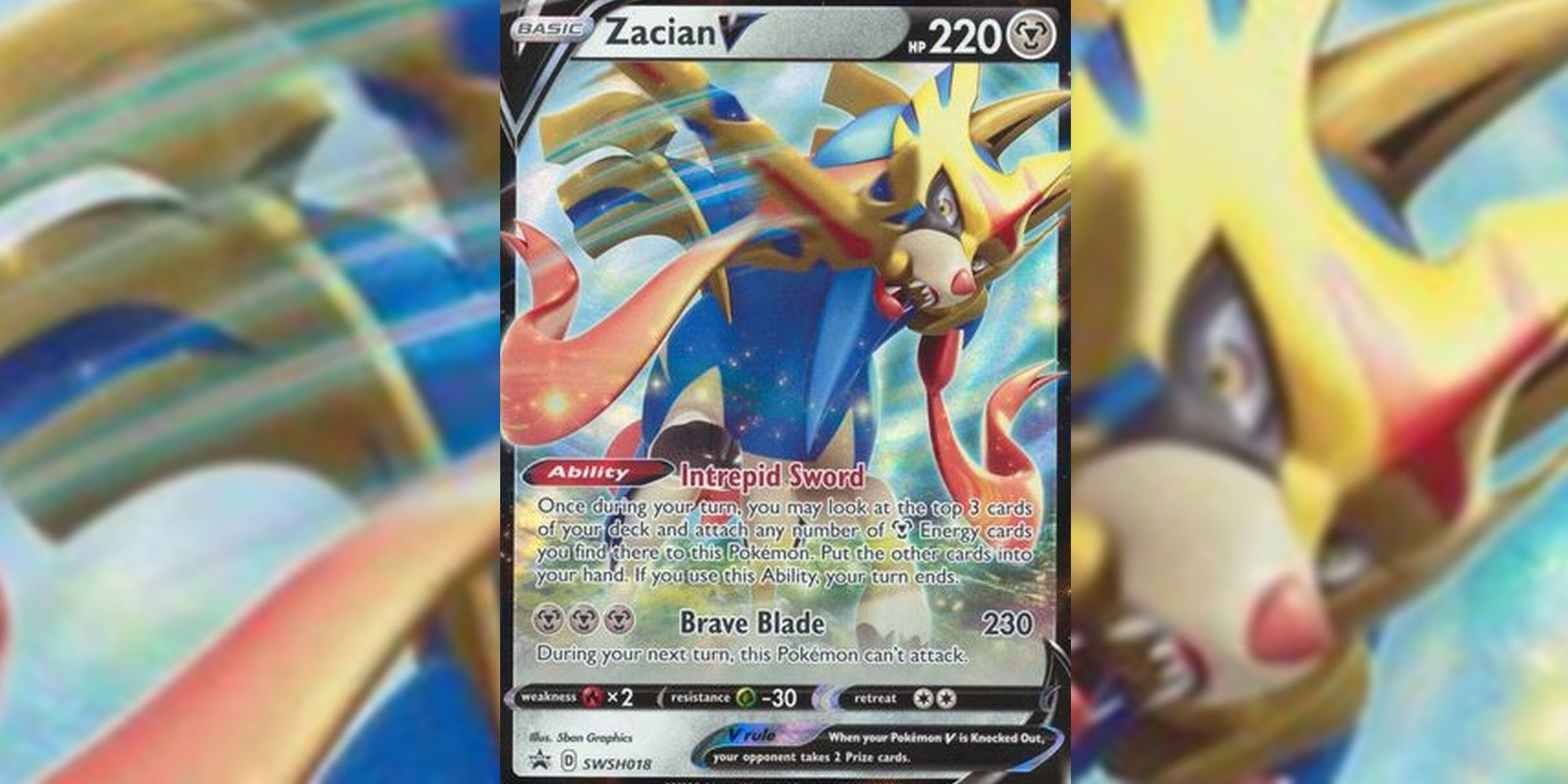 Zacian V burst into the scene in high gear. It is one of the most powerful Pokemon in the video games, and the same goes for the card game. Zacian's ability Intrepid Sword is just as broken in the TCG as it is in the video games.

With it, you draw three cards and attach the metal energies you find to Zacian while also ending your turn. Its best partners, Lucario & Melmetal-GX and Arceus Dialga Palkia-GX, have rotated out of standard, hurting Zacian's usefulness, but it's persevering despite that. This card alone proved that the best kind of Steel-type Pokemon are the fastest ones. 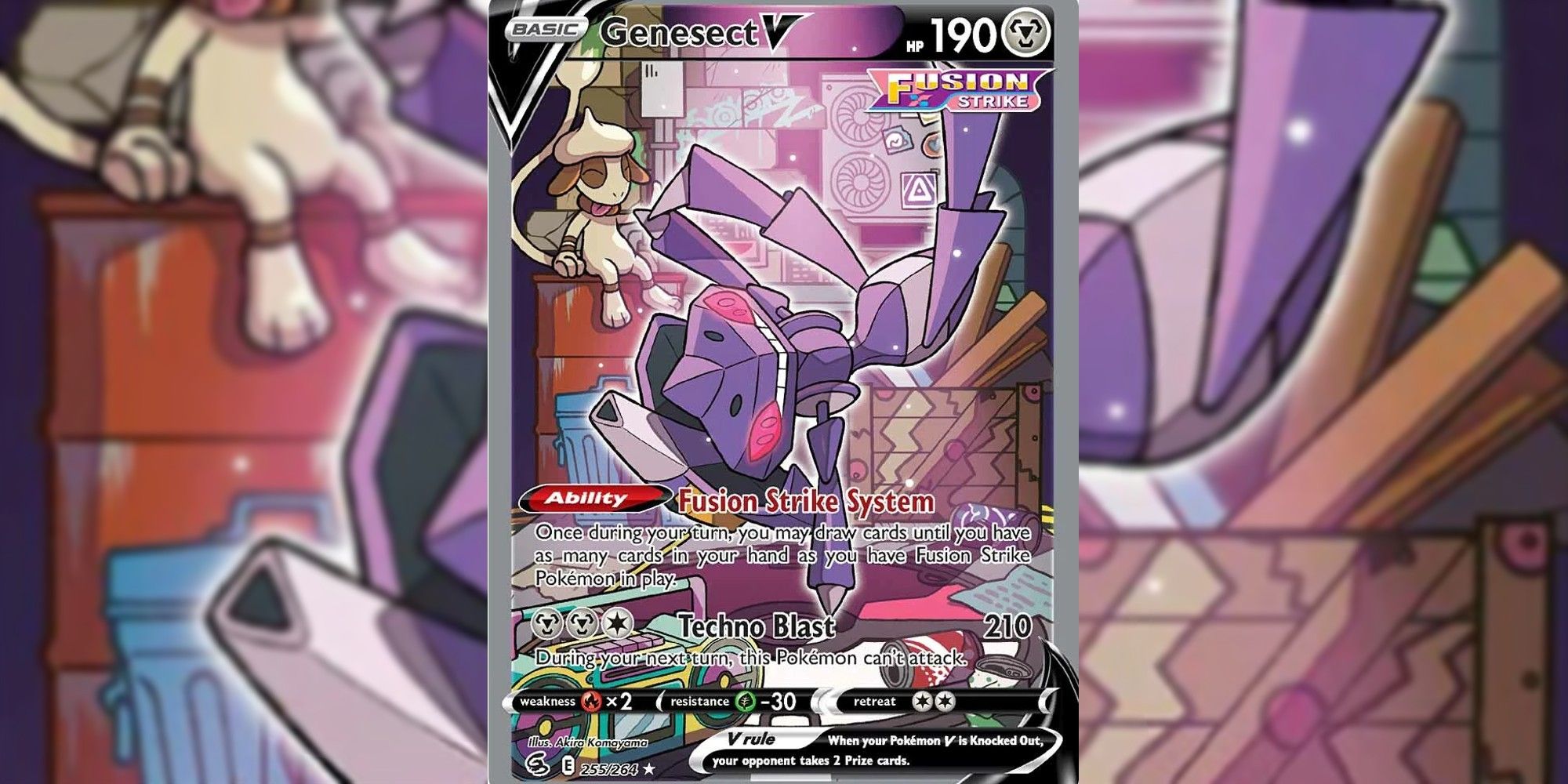 Genesect V is another Pokemon that gives you another drawing option. The ability Fusion Strike System lets you draw cards until you have as many cards as the Fusion Strike Pokemon you have in play.

This could easily mean four or more cards in a dedicated Fusion Strike deck. Considering how many decks use their one supporter per turn to draw this many cards, doing it with an ability is surely welcome in the right deck. 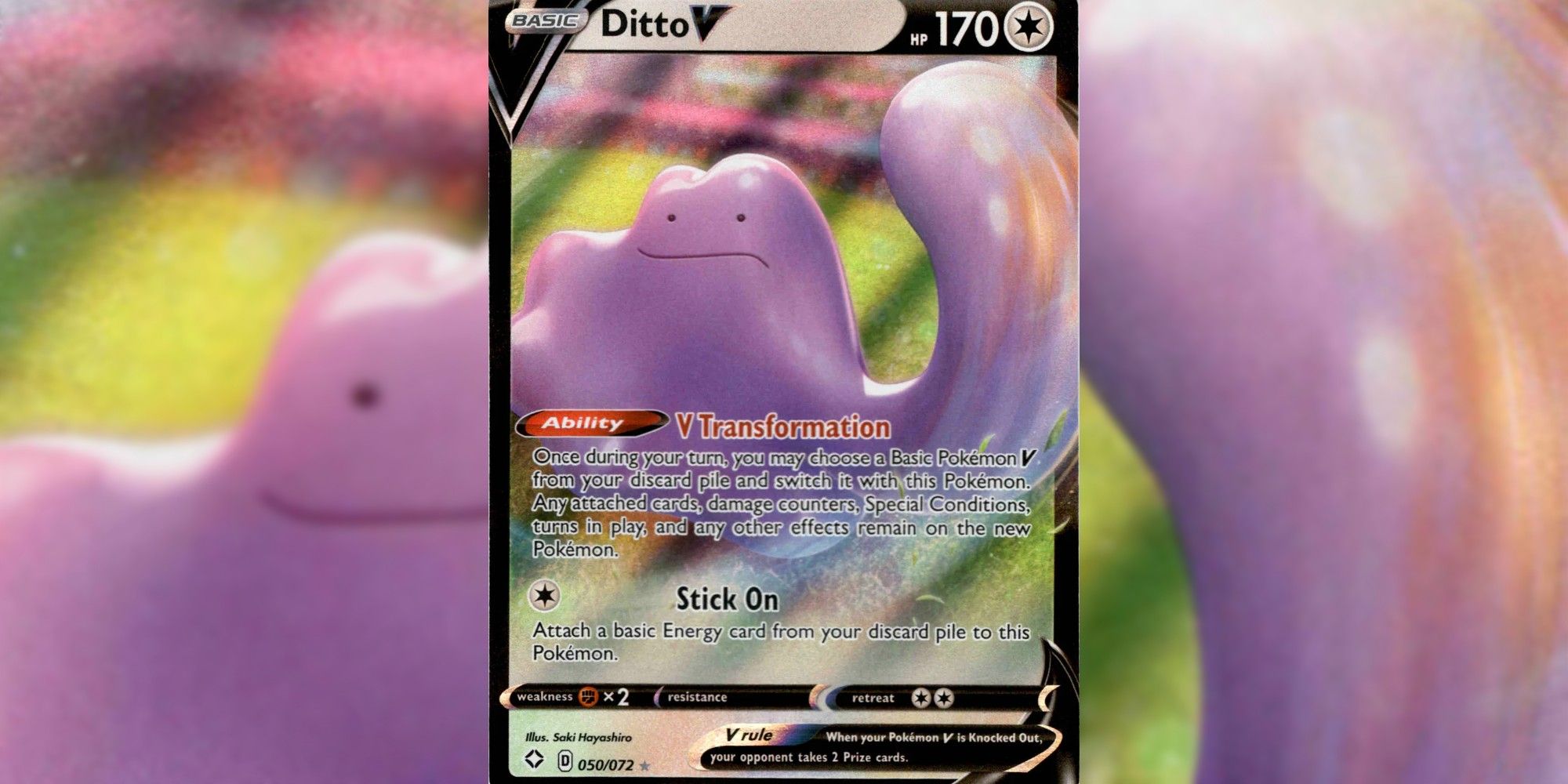 Ditto always has and quite probably will always be a gimmicky Pokemon to use in any form – it's a Pokemon that can become all Pokemon. The TCG is no exception to this rule, and using Ditto can be pretty weird but also extremely fun. Ditto V has the ability V Transformation.

This allows you to replace Ditto with a basic Pokemon V from your discard pile, but all the damage, counters, and conditions stay on the Pokemon. This is a very unique but equally powerful ability. Ditto may not win you games on its own, but it can become that one Pokemon V in your discard pile that will, so it's all good. 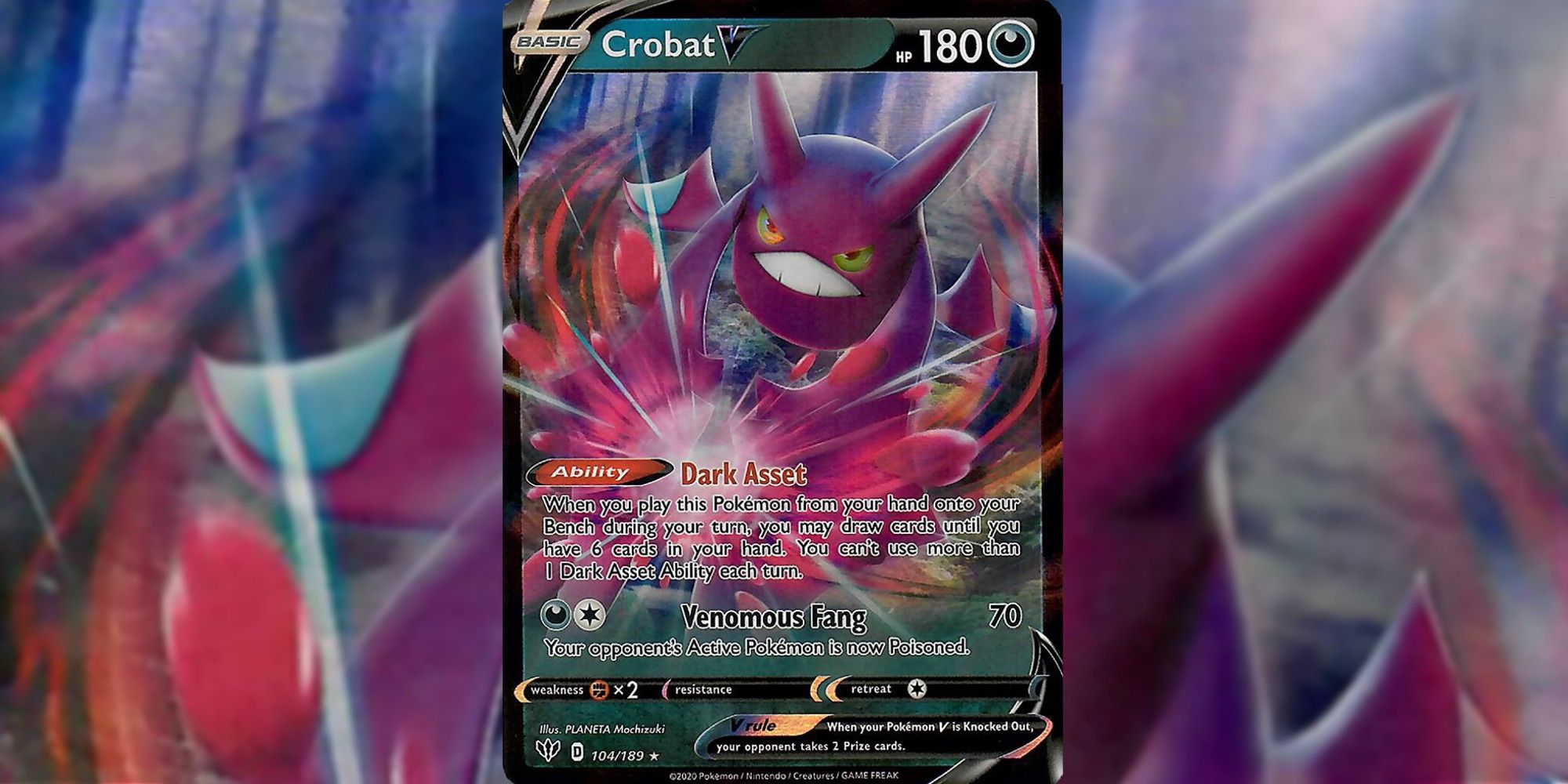 Crobat V has one of the best draw effects in the game. By putting it onto your bench, you can use its ability Dark Asset, which allows you to draw cards until you have six in your hand. This is a beneficial ability and is literally more powerful than some draw supporters, which you can only use once a turn.

There are several ways of searching or finding your basic Pokemon, so you will likely have consistent access to Crobat V. While its attack is nothing to write home about, just the ability to draw up to as many as six cards for no cost makes it a fantastic card.