Some Pokemon added to Pokemon Unite's roster are heavily requested and anticipated; while others come as a surprise, appearing to come completely out of left field. Their latest addition, Sableye, falls into this category, but proves to be a unique and great fit for the game.

Coming in as a Supporter, Sableye plays this role in an untraditional fashion compared to other Supporters previously added to this game. Playing more of a hindrance role, Sableye's abilities and moves will prove to be unfamiliar and unique on the battlefield – fear not, we've got you covered with all you need to know about this new release.

When To Pick Sableye 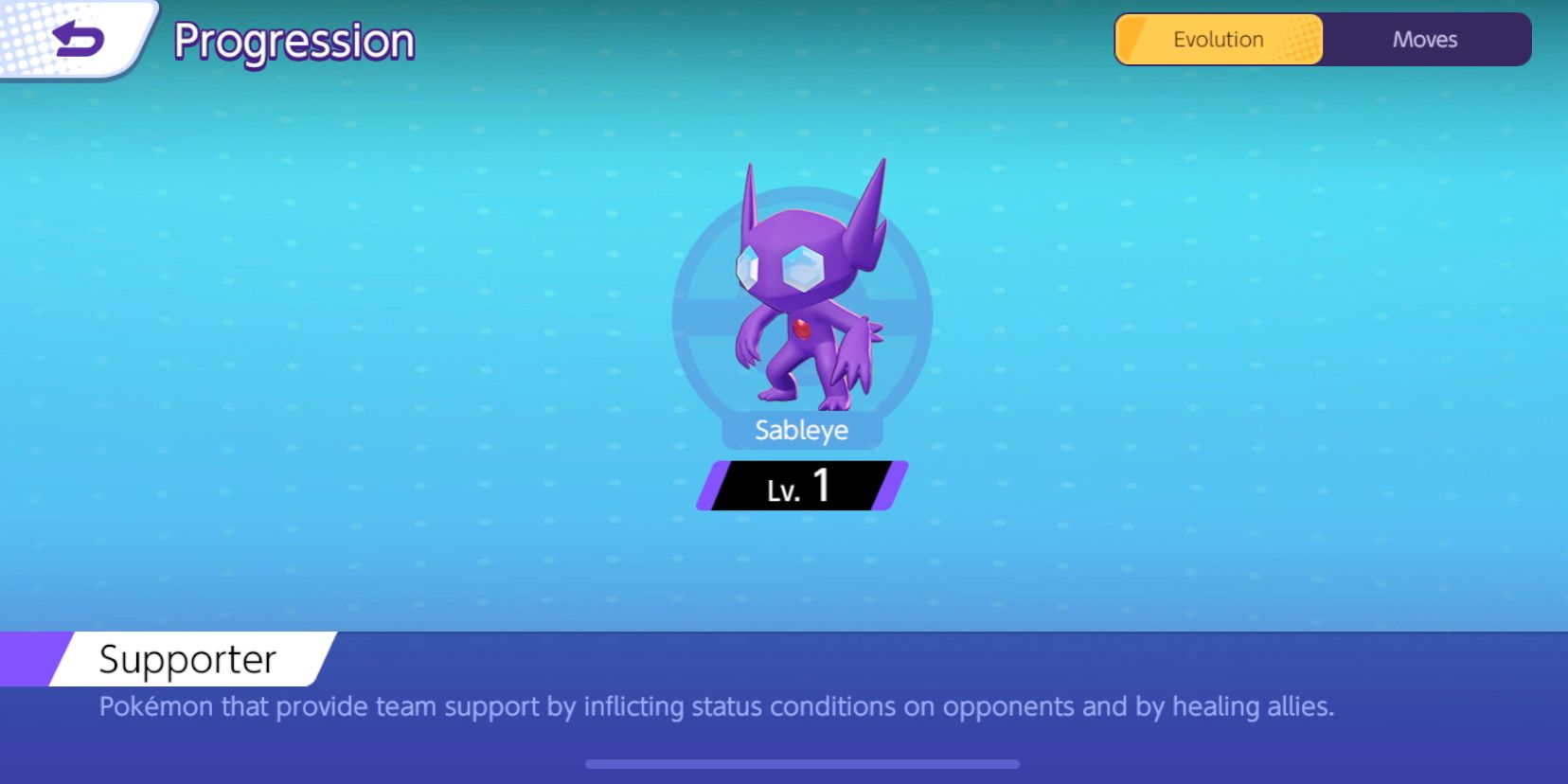 As mentioned previously, Sableye is not a traditional Supporter in Pokemon Unite. Those that fall into this category typically excel in their ability to buff and heal their allies throughout the course of a match. When it comes to Sableye, this Pokemon plays this role by hindering opponents through the use of its various stun and disrupting moves and abilities, leaving them vulnerable to attacks from you and your allies.

Possessing the Prankster passive ability, Sableye is fantastic at stealth, obtaining invisibility and increased movement speed when outside the opponents' visual range. These buffs will remain active for a short time when you have entered the visual range of the enemy, allowing you to sneak up on and attack unsuspecting opponents, which is especially useful when your allies are nearby and can take advantage of this vulnerability.

For these reasons, Sableye finds the most success in either the top or bottom lanes, consistently providing you with nearby allies. Although it is possible to deal significant damage with Sableye, its lack of endurance often makes it easy for opponents to knock you out in one-on-one situations, so the presence of your teammates maximizes your overall effectiveness.

That being said, you can find success when opting for the central lane. This is not due to Sableye's one-on-one capabilities, but rather due to its quick movement speed while utilizing its Prankster passive ability. When playing in this section of the battlefield, use your increased movement speed to rapidly move between the top and bottom paths, allowing you to quickly team up and support your allies for match objectives and larger team fights. 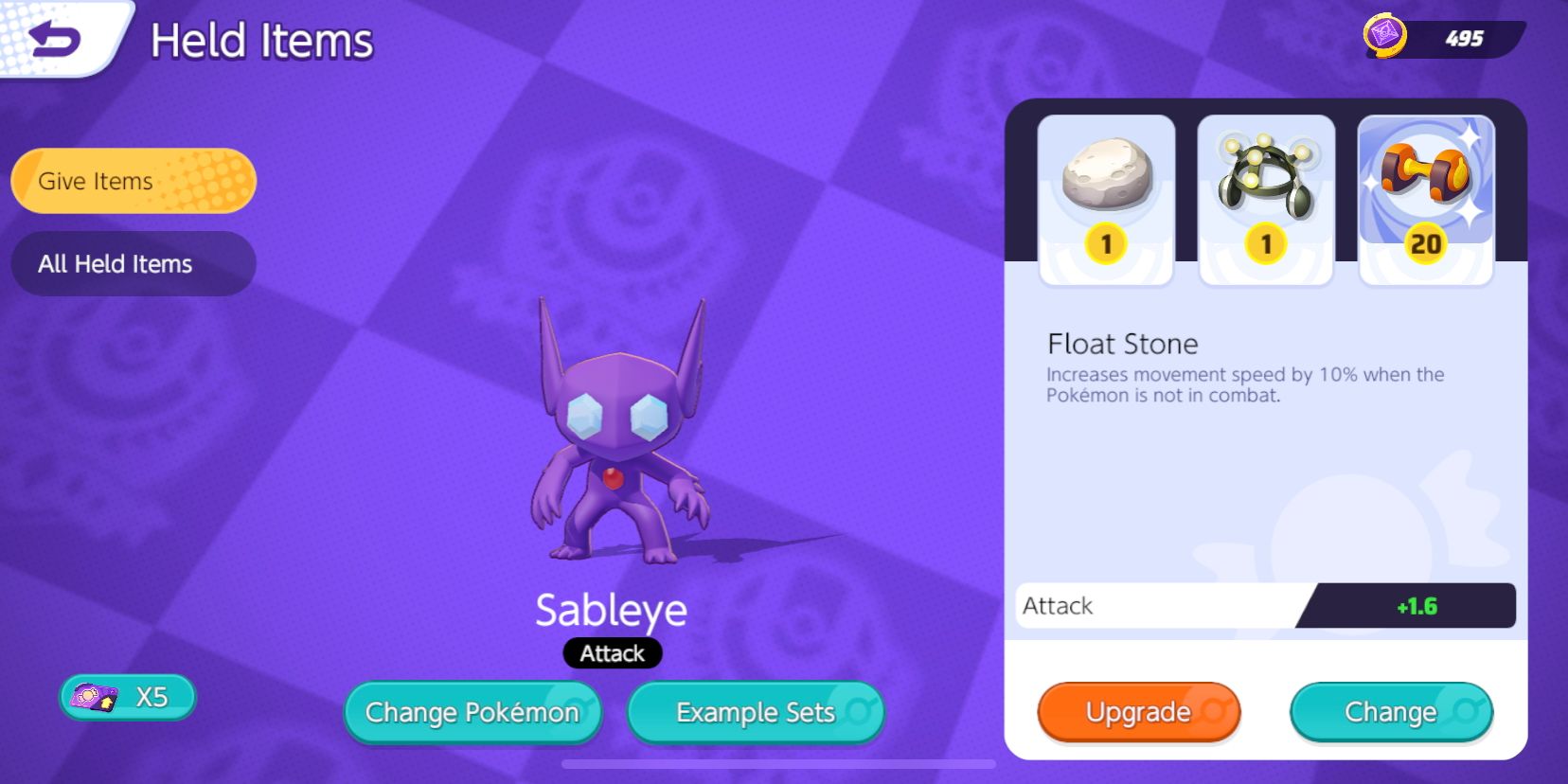 This build takes advantage of Sableye's ability to sneak up on opponents and deal significant damage to them when they are not expecting it. This play style utilizes its ability to become invisible, giving you the opportunity either sneak up on enemies or stealthily evade and retreat from dangerous situations throughout the course of a match.

Start by selecting the move Shadow Sneak, instantly putting Sableye in stealth mode, increasing its movement speed and making them invisible. This will provide Sableye with a boosted basic attack, dealing significant damage and giving the opponent the fear effect when they are attacked while you are in stealth mode. The fear effect will force the attacked Pokemon to move away from you against their will, leaving them extremely vulnerable to attacks.

Follow this up with Confuse Ray, another move used to hinder the opposition. When an enemy is hit by this attack, not only will it deal damage, but it will also "confuse" the opponent, forcing them to attack their allies and other wild Pokemon for a short time. Again, this will greatly hinder the enemy team, providing a great opportunity for you and your allies to deal damage or retreat if needed.

For Held Items, Exp. Share is a great choice, regardless of the build. Due to the supporting role that Sableye plays, knocking out wild Pokemon and gaining experience will typically not be priority, so the Exp. Share makes up for this. Additionally, the use of the Float Stone item works extremely well, further increasing your movement speed while also buffing your attack stat. The Attack Weight item is also recommended, due to the ease of scoring points while using the move Shadow Sneak.

Slow Smoke is recommended as your Battle Item for this build. Use this on the opponents you sneak up on, making it even more difficult for them to retreat from your storm of damage and hindrance moves. 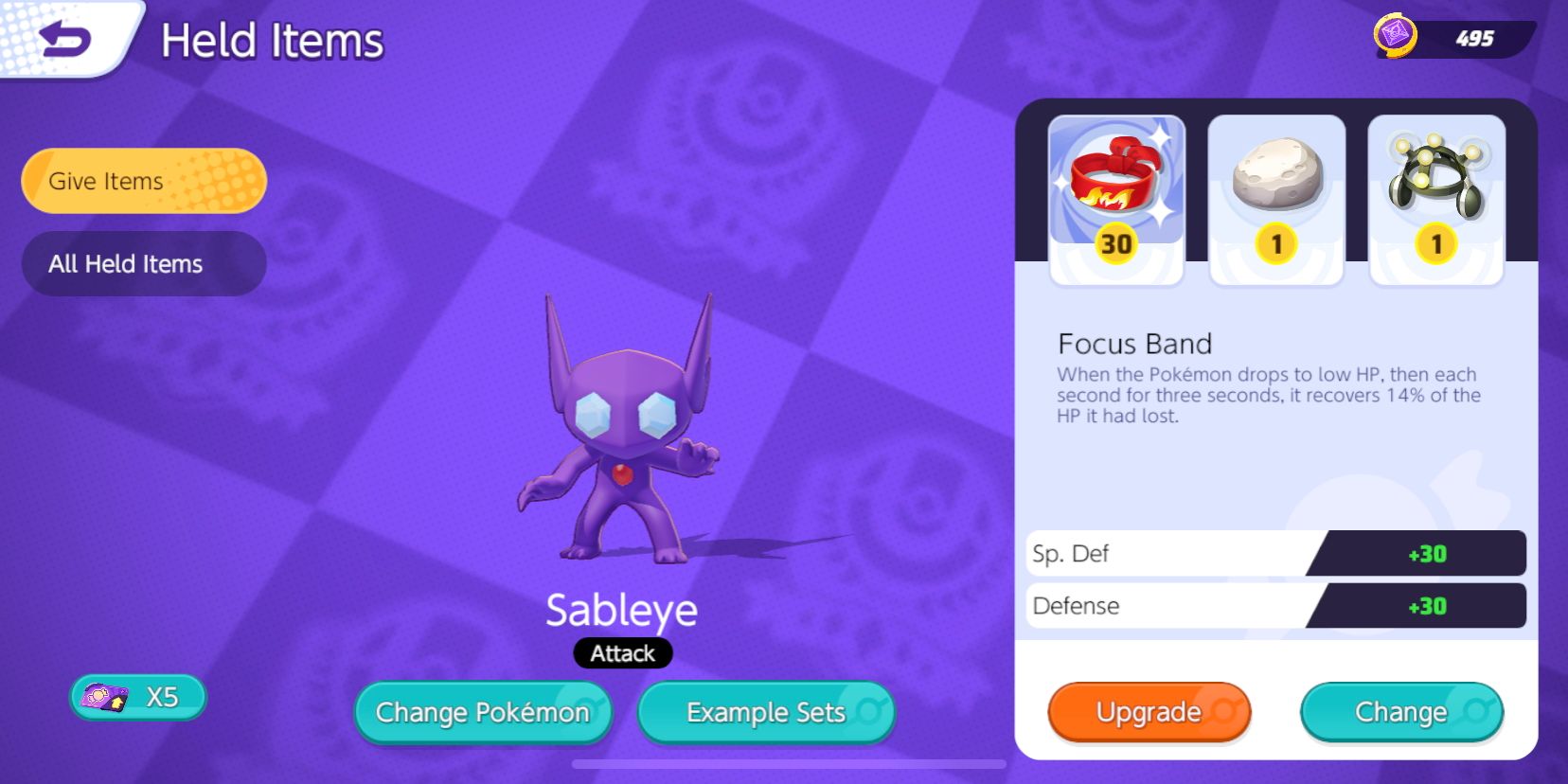 This build uses two moves that center around Aeos Energy, the resource used to score points in a Pokemon Unite match. Use this play style to sneak up on enemies and steal their Aeos Energy, making it extremely difficult to score points and improve their stats through the use of stacking Held Items.

Opt for the move Knock Off, a dash attack that will leave the enemy unable to act for a short time when hit by it. Additionally, this move will cause the enemy to drop Aeos Energy that they have, leaving it on the battlefield and making it so they are unable to recollect it.

Pair this with Feint Attack, used to place fake Aeos Energy around the battlefield. When an opponent picks up this fake Aeos Energy, it will explode, dealing damage to them over time and decreasing their movement speed. Additionally, the area around the fake Aeos Energy that you place will be visible to you, allowing you to see enemies even if they are hiding in areas with tall grass.

For your Held Items, you will still want to equip both the Exp. Share and Float Stone due to how well they pair with Sableye's kit and play style. Additionally, the use of the Focus Band Held Item is recommended for this build, providing you with rapid health regeneration with a play style that requires you to get closer to enemies when you are attacking. The Attack Weight Held Item also proves to be useful with your ability to steal Aeos Energy from the opposition.

For your Battle Item, X-Speed is recommended here. Without Shadow Sneak or any other mobility moves in your kit, this is great for either quickly engaging or disengaging with the enemies when needed. The Eject Button Battle Item could also be used here, also providing you with increased mobility when needed. 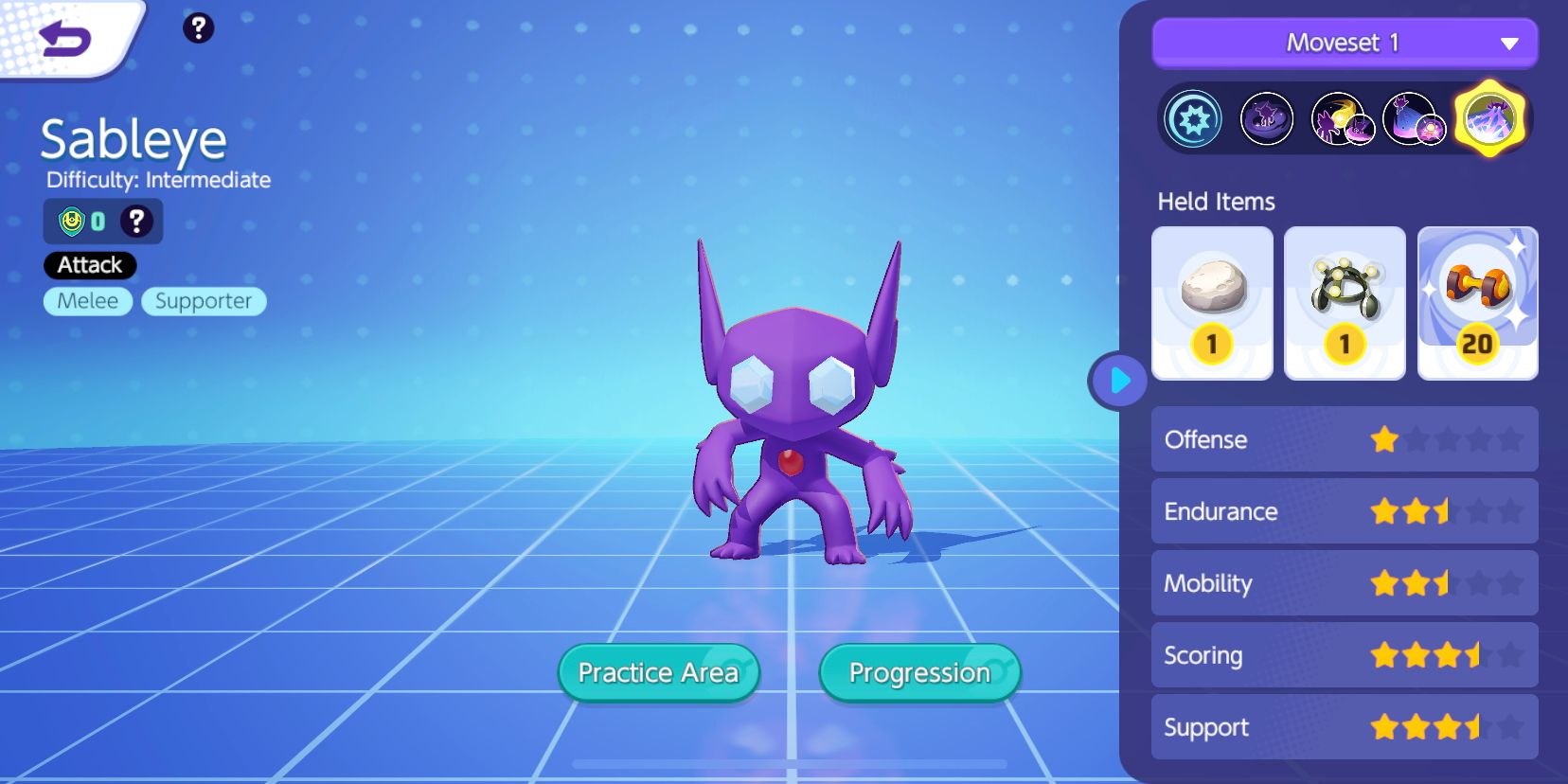