Pokemon Unite offers a choice of three maps when playing Quick Matches, which rotate daily. One of these is Mer Stadium, a map that provides you with a quick, action-packed experience. This is good for when you don't have too much time, and can't dive into a fully fledged, longer-lasting ranked match.

Resembling a smaller version of the main Remoat Stadium, this map possesses many of the same features. That being said, it is important to know how these features function on Mer Stadium specifically, as playing matches within this arena doesn't necessarily make for the same strategies or instinctive feeling. 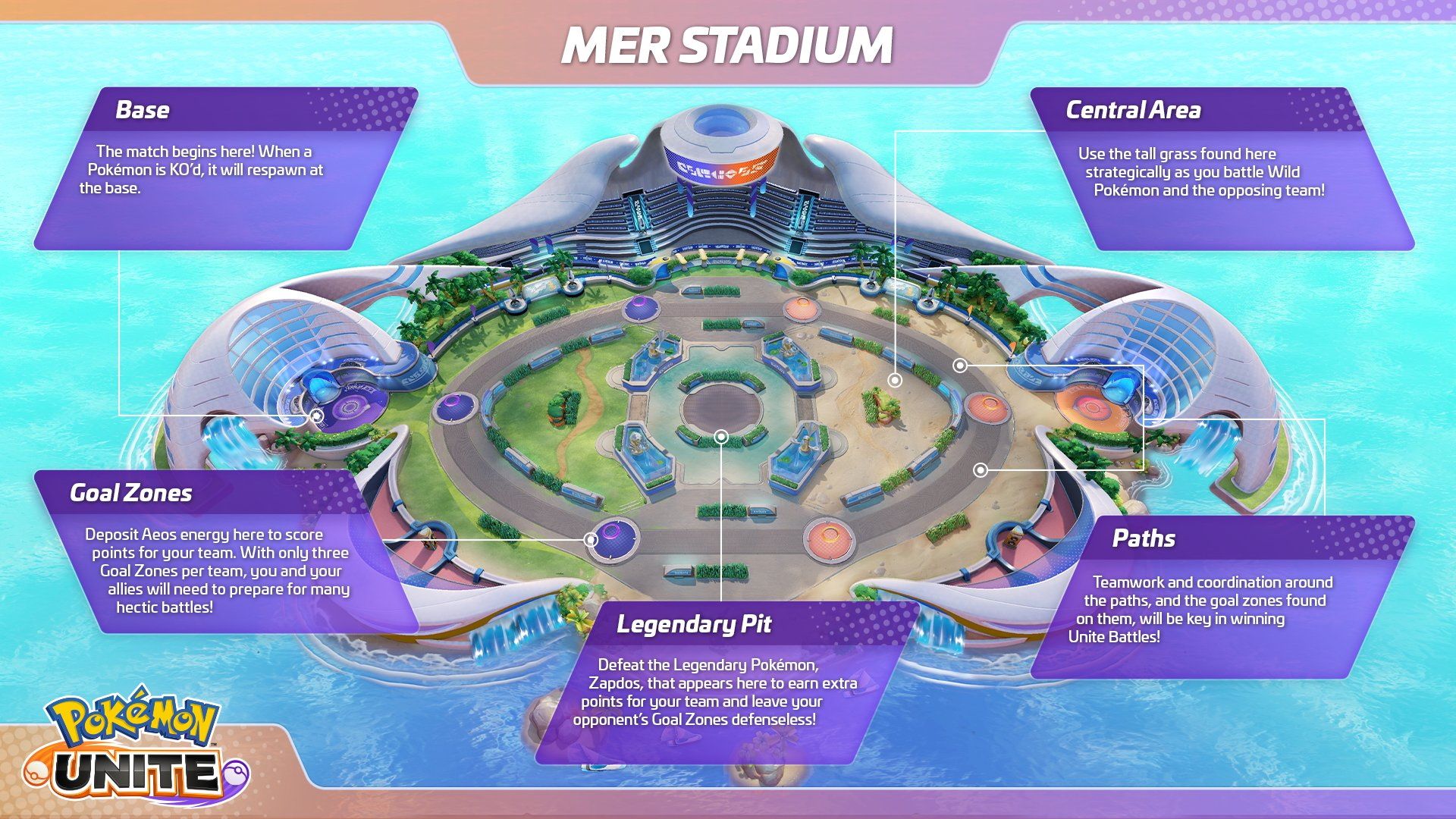 Mer Stadium is divided into three main areas: the top path, bottom path, and center path. There are three Goal Zones for each team to defend on their half of the arena; one in each side path, and one outside your team's base.

You and your allies will spawn inside your base at the start of the match and after being knocked out, an area exclusive to your team. As usual, quick health regeneration is provided. Super Jump Pads will appear at the 2:30 mark, located directly outside each team's base, allowing you to quickly launch yourself to one of six locations in the arena.

You will regenerate health and obtain a shield when inside one of your team's Goal Zones, providing you and your allies a place to safely recover. Initially, you will only be able to score in the enemy Goal Zones in the top and bottom paths. These Goal Zones, called Active Goal Zones, will be highlighted on your map throughout a Unite battle. To gain access to your opponent's third Goal Zone, your team must break one of these two Goal Zones first.

The two outer Goal Zones each require 60 points to be broken, while the Goal Zone outside your base is unbreakable. When a Goal Zone is destroyed, healing and scoring are no longer available at that location. You and your allies will gain a speed boost when traveling in the top and bottom paths if your Goal Zones in those lanes are still active, while your opponents will have their speed decreased when in this area.

Points scored in any Goal Zone will be doubled in the final minute of the match.

Knock out Wild Pokemon with your team, giving you XP and Aeos Energy. The following Wild Pokemon can be seen in Mer Stadium.

Additionally, two Wild Pokemon provide buffs once defeated; both are found in the central area of the map.

Boss Pokemon spawn throughout a Unite Battle, appearing at different times and providing unique boosts to whichever team executes the final hit. Securing these Pokemon greatly contributes to your team's overall success, allowing you and your allies to gain an advantage over your opponents both in XP and points scored.

There will be a 30-second countdown on the map prior to the appearance of each Boss Pokemon. Check your map often, so you can make it to these important battles on time.

When two minutes remain in a match, any Rotoms will despawn if they have not been defeated by this time. However, as long as your team knocks out this Pokemon before the one-minute mark, it will not despawn, instead continuing to push your opponent's Active Goal Zone.

Success can be found through numerous play styles, but the following strategies are recommended when battling at Mer Stadium.

Maximize your team's chances of success in a match by following this strategy.