There’s a highlander wearing a kilt with an axe guitar combo on the left-hand side of the stage, strumming notes that send shockwaves to the other side, obliterating red-skinned demons adorned with vintage punk rock helmets. It’s a metalhead power fantasy with riffs that literally rip—sprinkle in a few roguelike elements alongside a deck of cards and you’ve got 2022’s version of Slay the Spire, but with a little more rock ‘n roll.

Power Chord is pretty simple. You have a map that you chart yourself, leading to fights, bosses, shops, and health drops, carving out your own journey to the final big bad of each segment. Along the way, you collect cards that are specific to each of the four members of your band, cards you can use to heal, armour up, or attack. It’s a Monster Train-inspired roguelike, but with a unique style that celebrates punk, rock, and metal—from the swinging ‘60s to the emo ‘00s.

My favourite band member is Grimnir Brawlfist, not just because his name is as metal as his aforementioned kilt and axe guitar, but because he’s a rage-fuelled damage dealer that turns incoming attacks into powerful counters. Each of the four has their own interesting spin which works in tandem with the others, creating a near-perfect synergy if you deal the right cards. It’s a lot like a real band, only instead of instruments flowing together to make for a metal ballad, you have graffiti guns firing off on all cylinders, notes that shatter bone, and maces that crush skulls. 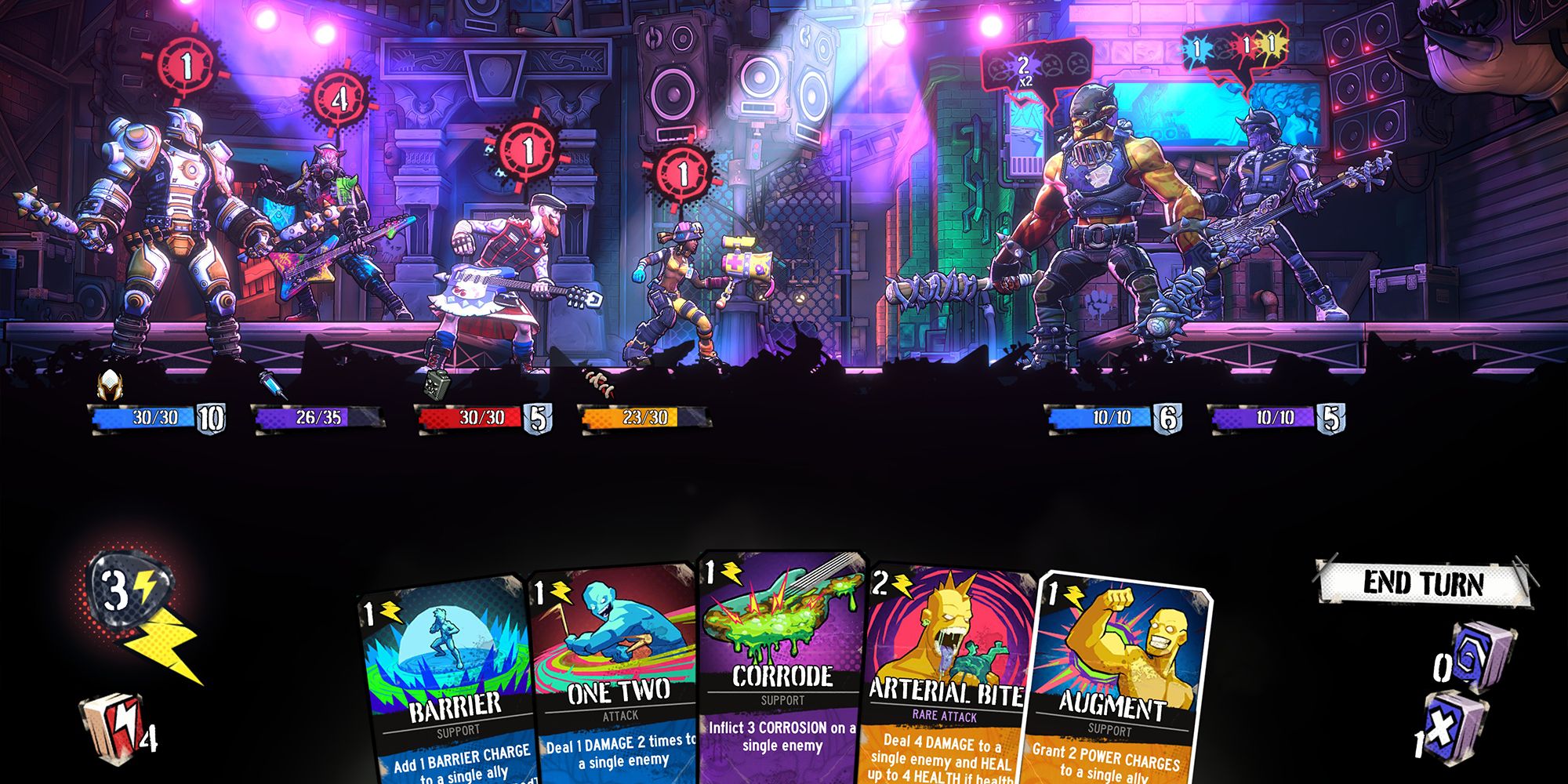 Card games are a dime a dozen nowadays—whether you’re dipping into the world of tabletop or browsing Steam for something new to play, you’ll find a gazillion to try out. But developer Big Blue Bubble has struck a chord with me because of its unapologetic aesthetic, reeling me in with vibrant neon stages, glaring lights, pop art card designs, striking backing music, and the flamboyant punk enemies. There hasn’t been a metal or rock game that bakes the culture into its visuals like this since Brutal Legend.

But that was just the reel. Once I was ensnared, Power Chord proved to be one of the most intuitive card games I’ve ever played. You start off slow, building up the band and learning the ins and outs of their cards and unique playstyles. Then you begin to build up a synergy by combining their moves. That gradual flow eventually leads to bosses and tougher enemies, pushing you to try out new combos and manage your team’s stats more carefully, but the card descriptions are always clear and concise, getting to the point without fluff. I never felt lost in this world and even the map was to-the-point, the icons clearly displaying what to expect when you click on them. I know I’m entering another fight and nipping to the shops for some health juice because simplicity won out over needless waffle. 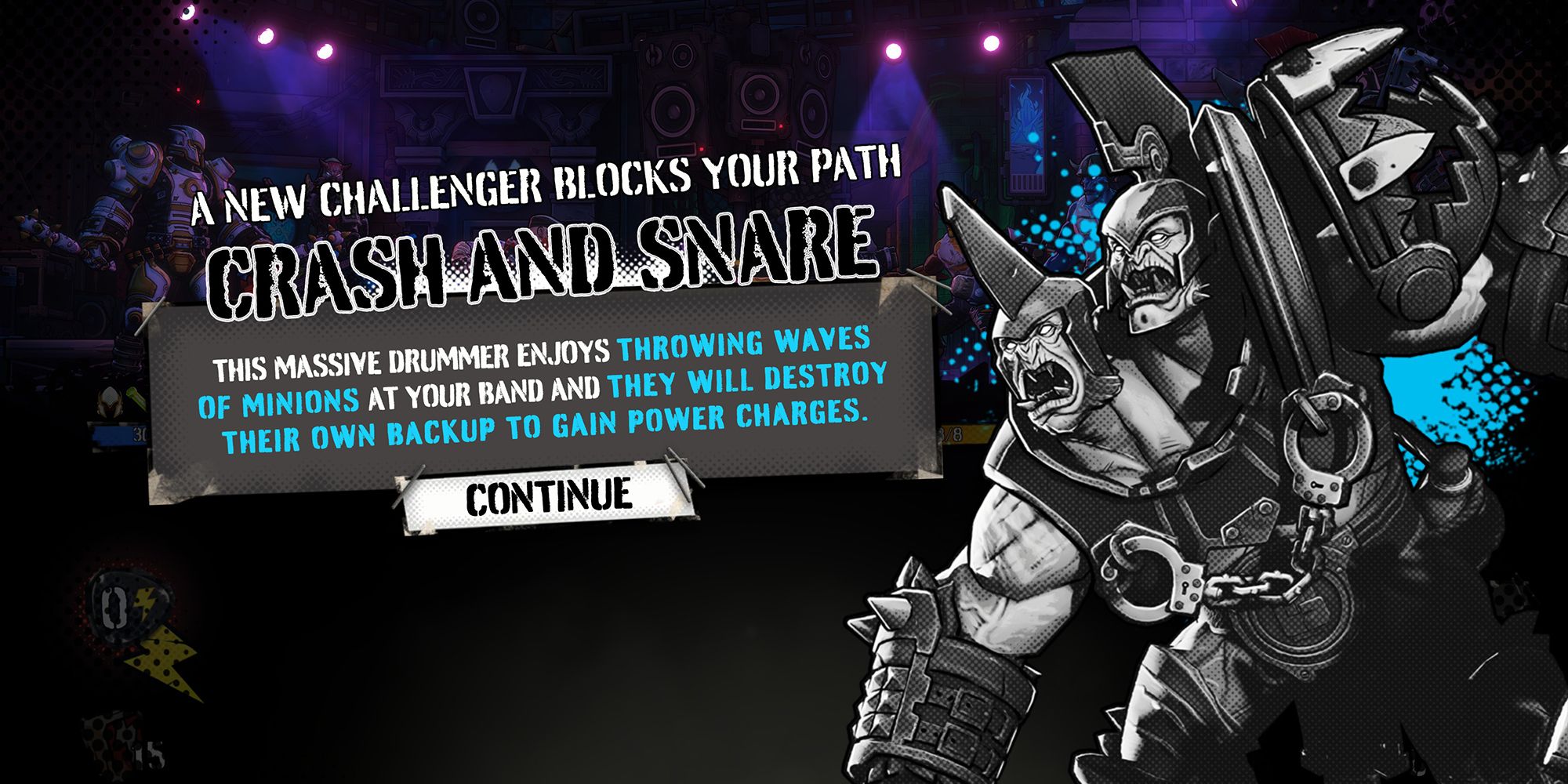 I got stuck in with ease and couldn’t put it down, constantly restarting my run and trying out new cards, paths, and synergies, only to hit that dead-end wall of the preview’s limits. It’s an incredibly promising card game, possibly 2022’s own cult breakout like Griftlands, but I’m hoping to see more variety when it does finally drop. The little snippet I played was a visual treat, but repetitive—the same stage and same group of enemies littered the path to the two-headed Hulk-like behemoth, and I’m left wanting to see more of Big Blue Bubble’s imagination sprawl onto the canvas.

Power Chord has already turned generic hellspawn into personality-rich baddies up to scratch with the band members. They vary from red-skinned to orange and blue, with ripped vests, spiked hats, gladiator armour, industrial guitars, skull and bones boots, and more. Metal is the Devil’s music, after all. The promise of more like that could make Power Chord one of 2022’s most interesting surprises, a mashup I didn’t know I wanted, but now I desperately need.