If you're keen to get a glimpse of what next-gen graphics are likely to look like, you're in for a treat.

Earlier this week, Nvidia and Luminous Productions have a real-time ray tracing tech demo showing off the visual power of currently in-development graphics tech that will see widespread use on the Xbox Scarlett and PS5.

The video, which you can see below, showcases what the Luminous Engine can do with ray-tracing enabled.

The Luminous Engine has already seen an outing this gen (it's the engine Final Fantasy XV was built in, and the main reason that game looks so pretty!), but as we edge closer to the PS5 and Xbox Scarlett release date we're likely to see it evolve into something far more powerful.

Luminous Engine is developed by and used internally at Square Enix, and this new demo (named 'Back Stage') follows on from previous tech demos Agni's Philosophy and Witch Chapter 0.

Previous demos focused on lighting, textures and animation, but this one is mostly a showcase of ray-tracing. 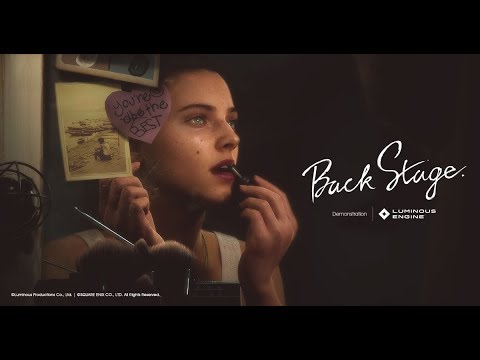 Essentially, it makes lights and shadows behave exactly as they would in real-life by tracking the path of every beam or ‘ray’ of light.

It’s like having cutting edge Hollywood CGI in your games at home and for the most part, this kinda tech, at least at the highest levels anyway, has been reserved for PC gaming.

Microsoft and Sony have already confirmed that the next generation of games consoles (the PlayStation 5 and Xbox Scarlett ) will feature hardware capable of ray-tracing, so you can expect graphics like those showcased in the video to come to your living room in the coming months.

You can expect more graphics showcases and demos like this one to be released by other publishers too, all so they can build up anticipation for the next wave of console hardware.

What is most important to you when it comes to buying a PS5?

The last PS5 video that got fans this excited was some months back in footage filmed by The Wall Street Journal’s Takashi Mochizuki.

For those who don't recall, the video – filmed at an on-stage presentation that was likely meant for Sony’s investors and business partners only – showed the console in action, playing a small section from the PS4 exclusive game, Marvel's Spider-Man.

what was really interesting is that the demo took 8.1 seconds to load on a PS4 Pro, but less than a second (0.083 seconds to be precise) to load on the new console hardware.

But it didn't end there. The demonstration continues, taking us further into the world of Marvel’s Spider-Man where again the PS4 Pro performs admirable, but nothing compared to the next generation hardware.

You can see some of the footage, below.

PS5 and Microsoft's Xbox Scarlett console are both expected to launch late 2020.