This past week Rage 2 released to thunderous a mild and polite smattering of applause. In spite of the game’s fantastic combat system, its world, story, vehicular gameplay, and pretty much everything else outside of charging into the fray with mutants and bandits leaves much to be desired. However, in spite of those failings, it’s worth expanding on just how great Rage 2’s combat system is and why I hope this troubled outing isn’t the last we’ve seen of it.

When Gears Of War and Call of Duty 4: Modern Warfare changed the industry’s approach to shooters, resulting in a years-long bombardment of the genre that was obsessed with gritty realism or embracing bleak edgy material, a lot of the more frantic shooters went away for a bit. However, to say that Rage 2’s gunplay is merely an arcadey throwback to the likes of Doom, Quake, Unreal Tournament, and other fantastical retro bloodbaths is a disservice to what this surprise sequel does right. Wolfenstein reinvented itself by bearing down on a tragic, epic story featuring well thought out characters and dollops of wacky, blood-soaked shenanigans. The 2016 Doom reboot didn’t really reinvent itself as much as it put its best elements forward and modernized them for a new generation, forcing players to become a constant whirlwind of shotgun-toting death if they have any hope of surviving the horrors of hell.

Rage 2 is…well, it’s different because its combat is about the toolset at hand, a colorful array of death-dealing weapons capable of flattening, splattering, disintegrating, and launching foes head-long into their death. Sure, you could argue that Doom is also a shooter that’s about having a creative toolset. However, I would argue that Rage’s flexibility sets it apart. In Doom, you constantly need to be switching weapons to stay alive, knowing which tool is the right one for the purpose. A wave of zombies and imps at the end of the corridor before you? Better whip out that shotgun and do some shell-sweeping. Giant demon? It’s time for the mini-gun or the rocket launcher. At its best, Doom feels like a violent ballet, with you constantly having to switch your weapons at the right moment to overcome the hordes as they descend on you. 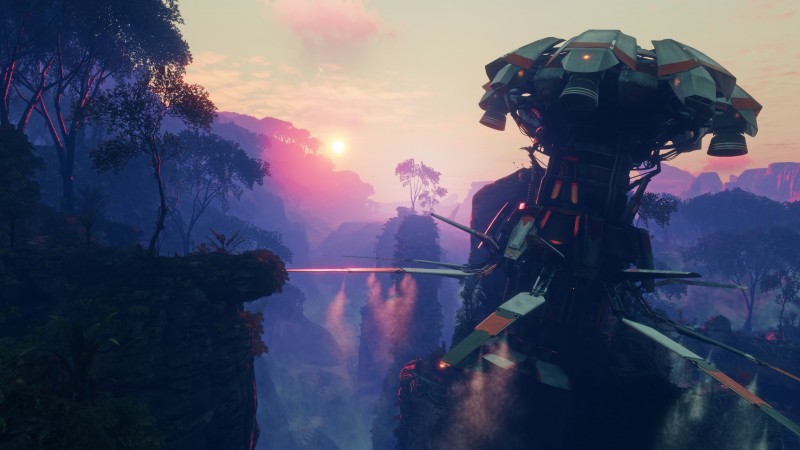 Rage 2 doesn’t require that sort of dexterity. Its toolset isn’t rigid. You can blast through the entire game with only a shotgun and assault rifle combo if you so choose. While the slack in difficulty means that you’re not forced as often into pulling off death-defying feats of amazement, it also means you’re given enough room to get creative as hell when it comes to using Rage 2’s arsenal of dastardly amusements.

My personal favorite? The Grav-Dart launcher. The Grav-Dart launcher functions like a more weaponized version of the Gravity Gun from Half-Life 2. You hit your target with a number of darts and then, once you have your target stuck with the desired number of darts, you point elsewhere (say at a water tower, vehicle, gas canister, or even up into the blue sky) and click the left trigger to send that target flying into wherever you’re aiming your cursor. The more darts they’re stuck with, the harder the target will be flung.

I’ve gone entire fights in Rage 2 slamming enemies into distant objects (or even other enemies) and watching their bodies erupt into gory explosions. Once, I was fighting some foes near an open road when a vehicle came back. I had just tagged a bandit with some darts and fired into the road with the left trigger. I watched breathlessly as the foe zoomed into that road and was immediately transformed into red paste by the truck as it zoomed past. Rage 2’s combat is filled with amazing, emergent mini-stories like this, and learning how to string those stories together with your weapons like combos is incredibly satisfying. 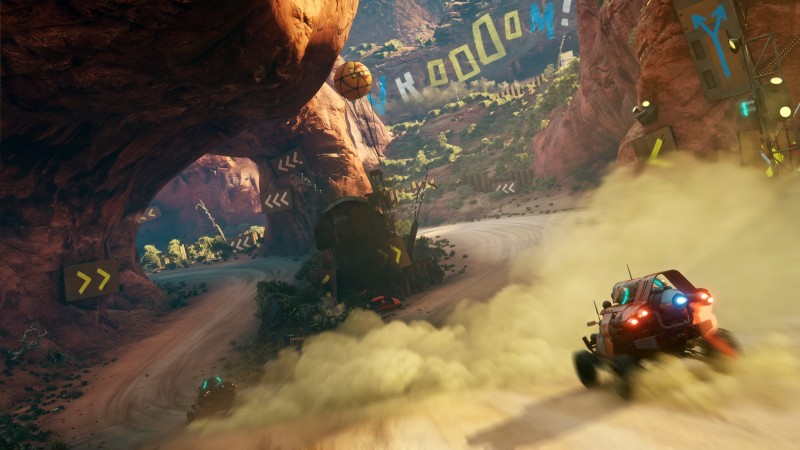 Near the last third of Rage 2, I had gathered all of the game’s weapons and powers, and was strolling into enemy encampments as a nearly invincible killing machine, showering foes in fiery wrath. Where Doom delights in challenging players with lopsided odds, Rage 2 reverses that paradigm, making you the all-powerful killer. The real fun comes with how you approach taking out your foes. If you’re a person with a startling deficit of imagination, you might settle for mowing down every foe with your shotgun. Boring. A real artist of death and mayhem will style things up a bit. Why not throw down a gravity vortex that sucks all your foes to a singular spot and then toss a grenade into the vortex with them as you walk on by? Not bad. Or, you could use your Shatter ability (think Star Wars’ Force Push) to throw those foes into one of your barriers that you’ve upgraded to disintegrate enemies on touch for an impromptu barbecue. Or, if you really want to get fancy, you can run around the camp, peppering foes with rounds from your Firestorm Revolver, and doing a nifty Thanos snap to set all of them on fire.

There’s an uncommon kind of bloody harmony amongst all the weapons and powers that’s hard to appreciate if you get distracted by the game’s failings. The sheer swift, stylish nature of sliding into a foe, blasting them into the sky with the shotgun, and then Shatter-pushing them literally miles into the sky for them to fall back down to a splattery grave is so cool. When everything is coming together, I feel like John freakin’ Wick, effortlessly painting entertaining scenes of masterful mayhem.

I’ve put 15 hours into Rage 2, which is hilarious to me because it’s main path takes you less than five. It speaks to just how great and unique the combat system is that I willingly spent (and continue to spend) time pursuing foes in such an uninteresting, barren world. The most tragic thing about Rage 2 is that deep down at its core, there’s an incredible loop of action gameplay that just belongs in a different game. If Rage 2, for example, was a story-driven linear shooter à la Titanfall 2 or Wolfenstein, it’d be so much more appealing as a cohesive work of art. Instead, it feels like I’m playing one great game jammed into another mediocre-at-best one.

Rage 2 is a sequel that I imagine few people asked for. Strangely enough, given the tepid reception the game’s got, I find myself hoping for yet another one, one that throws away the uninspired open world and goes all in on that phenomenal combat system.