After your second trip to Savali, Emporer Nefarious traps Ratchet, Clank, and Kit in the Zordoom Prison on Viceron. Rivet returns to Viceron, a place she’s had some traumatizing experiences in, to rescue her new friends. This is the first full planet you’ll be able to play after unlocking the map upgrade, so you shouldn’t have too much trouble tracking down the collectibles here. There are two armor pieces, three gold bolts, and one spybot to find here.

If you’d just like to see the full map with all of the collectibles marked, here it is. 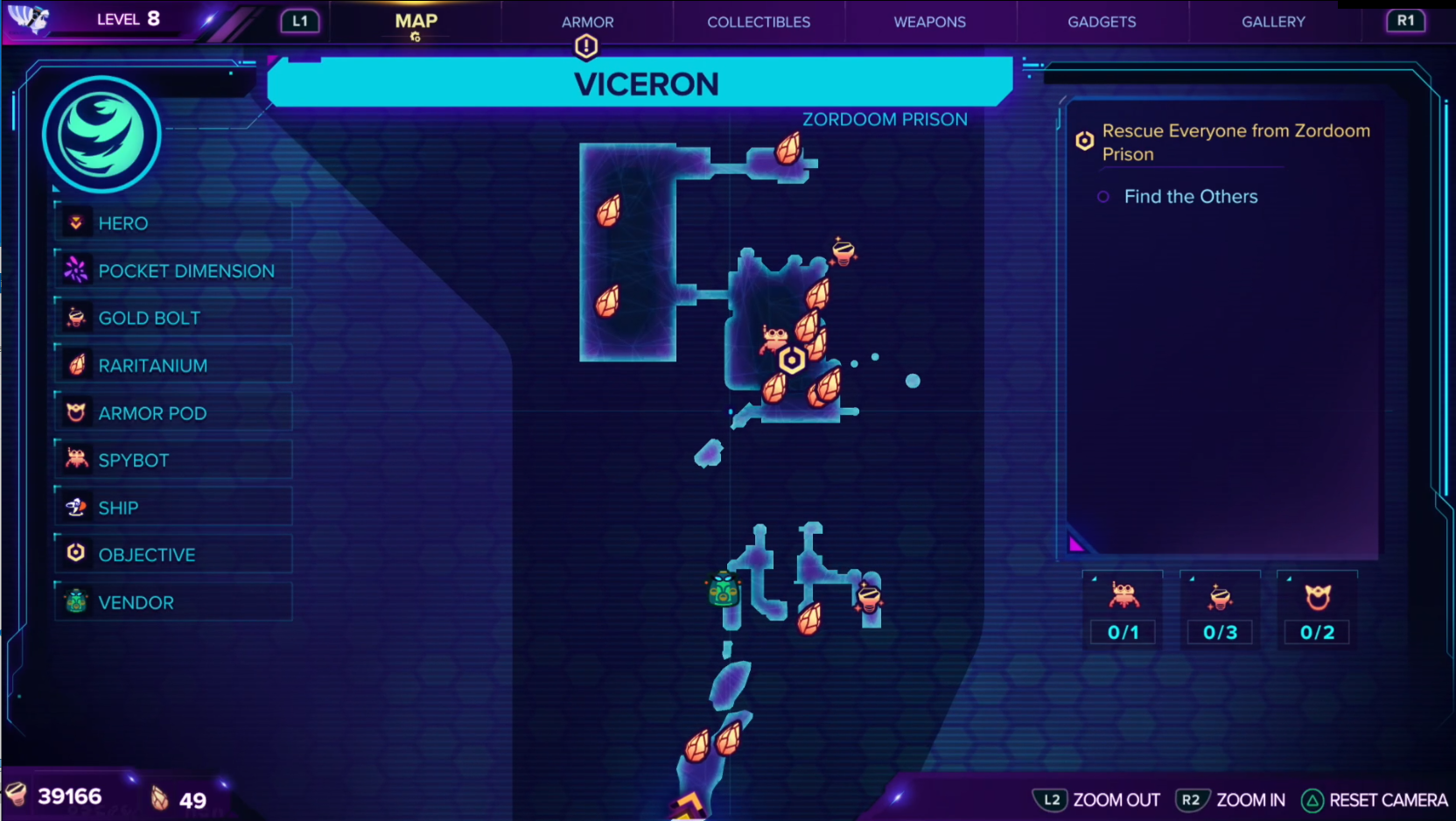 Start by heading down the path away from your ship. When you pass through the tunnel, turn around and look to your right. You’ll see three Raritanium on a ledge outside the tunnel. Then head back into the tunnel and immediately turn left to find 2 more Raritanium. Head back onto the main path and jump down to the next platform. 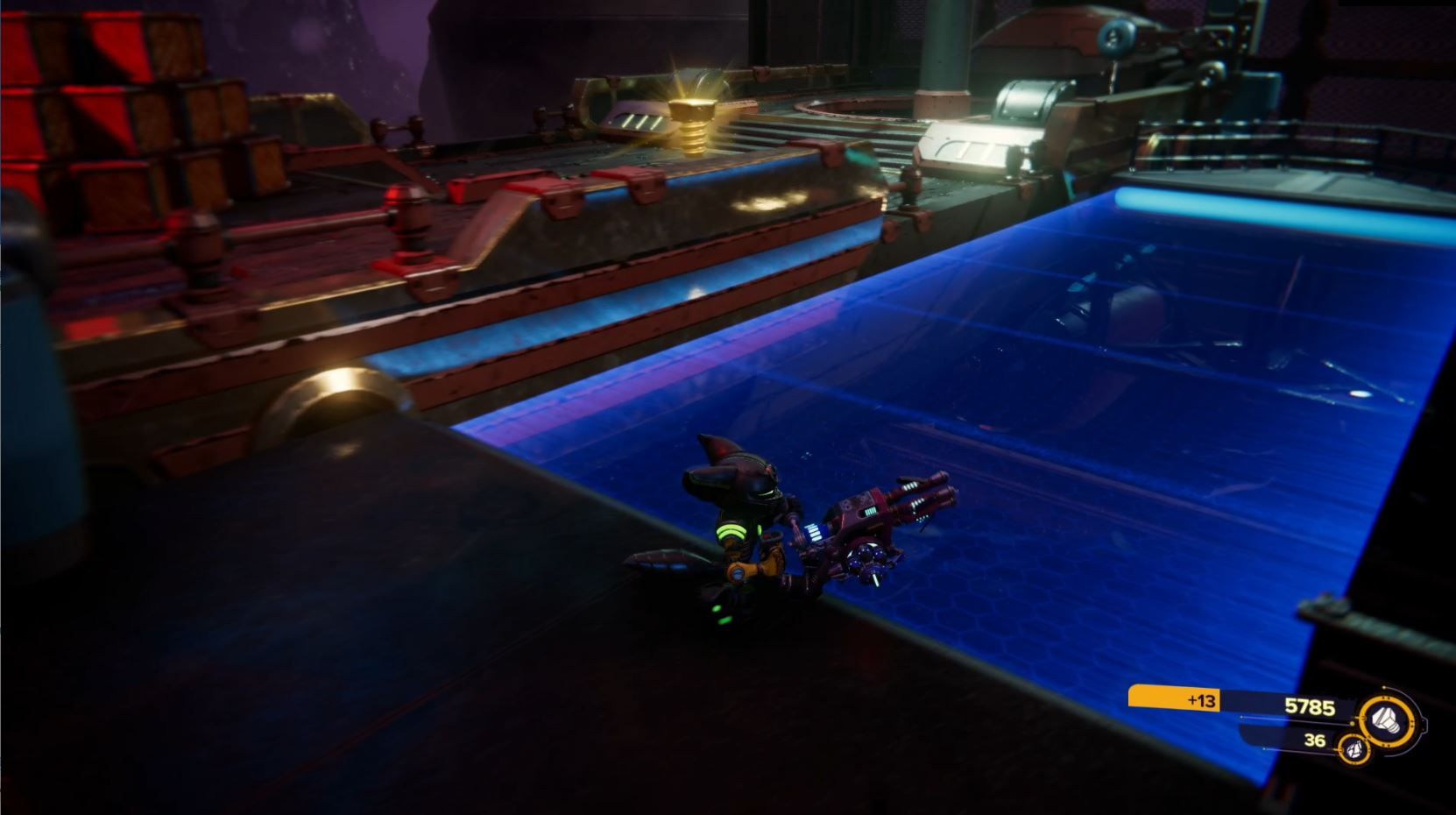 Dash back out of the room then turn right and head over to the green computer terminal. Activate it to create a bridge back to the other side, the activate the next green computer terminal you get to. Swing across and grab the rift in the distance to pull yourself forward. Jump down to find yourself right outside of the prison.

Fight your way around the building but make sure you grab both boxes of Raritanium on the right before you head out onto the jump pad. Swing onto the wall and hit both jump pads to reach the ventilation system. Hit the fan with your armor to break in.

Break the next fan you see, then turn left to get some Raritanium. Backtrack and make a right. Here you’ll find more Raritanium in the corner behind some pipes. After you grab those, turn around and hug the right wall to find a gap you can pass through. Continue on this path and press triangle when prompted to spot Clank underneath you. Break the fan ahead continue straight.

Ignore the path on the right until you reach the end. Turn right, then right again. Break the fan and you’ll find the spybot in a small red room. 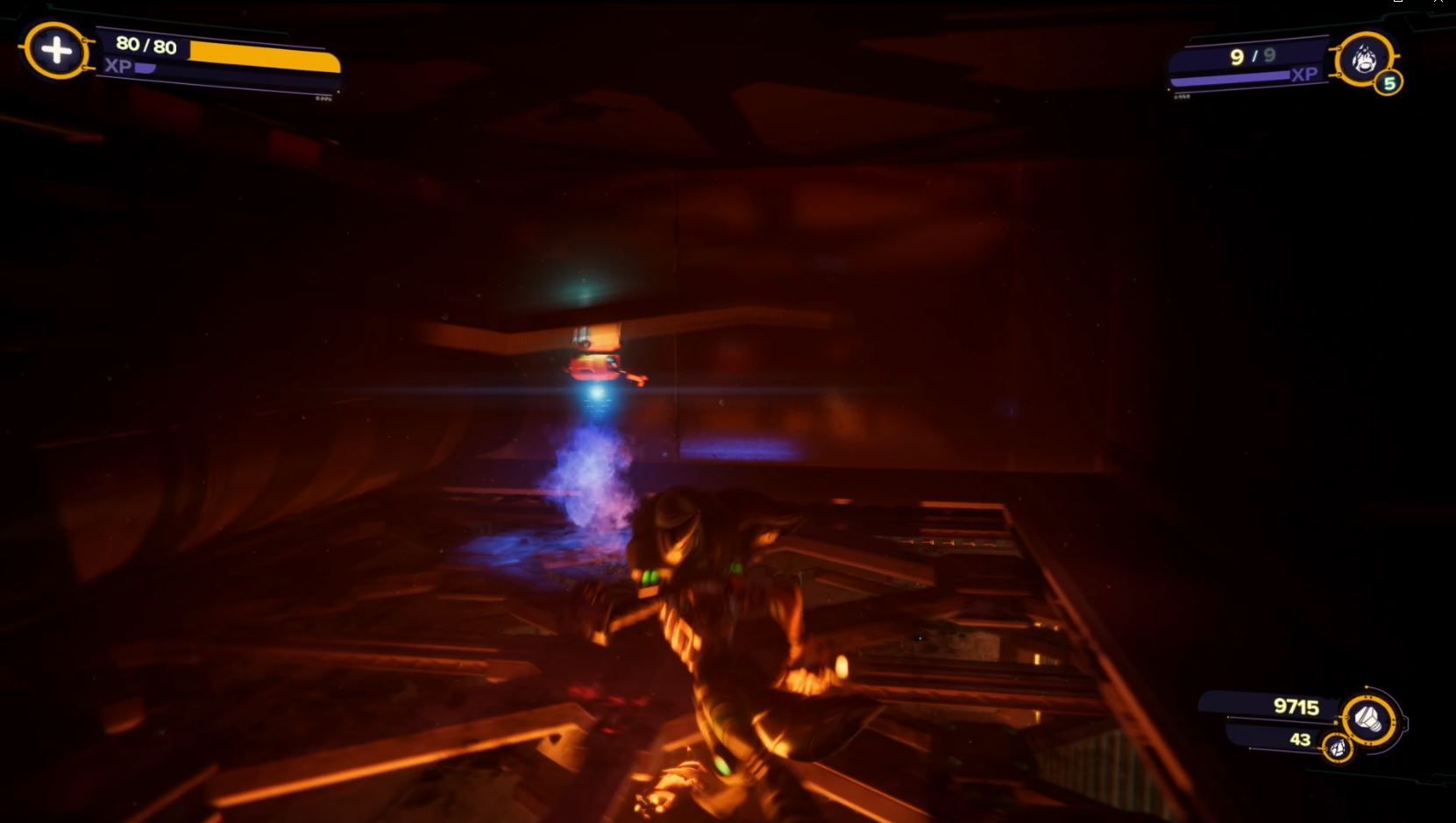 Press triangle outside of this room to spot some Goons talking. Head straight forward from here and turn left, then drop through the hole to leave the vents. Head over to where Clank is trapped in the red tube, kill the robots here, and press square to activate the switch. With Clank freed you’ll have to fight a small army of Nefarious Forces. Before you leave, grab the pile of Raritanium from inside the cell to the right of the exit.

When you exit, a robot will shoot at you from the room on the left, breaking the glass. Jump through the window and head back outside. There is some Raritanium behind some boxes directly to your right. Fight all of the snipers out here with something equally long-range, then head to the northeast side of the platform. You’ll be able to spot a gold bolt on a platform between two hanging containment cells. Just boost with R1 and jump across to collect the second gold bolt. 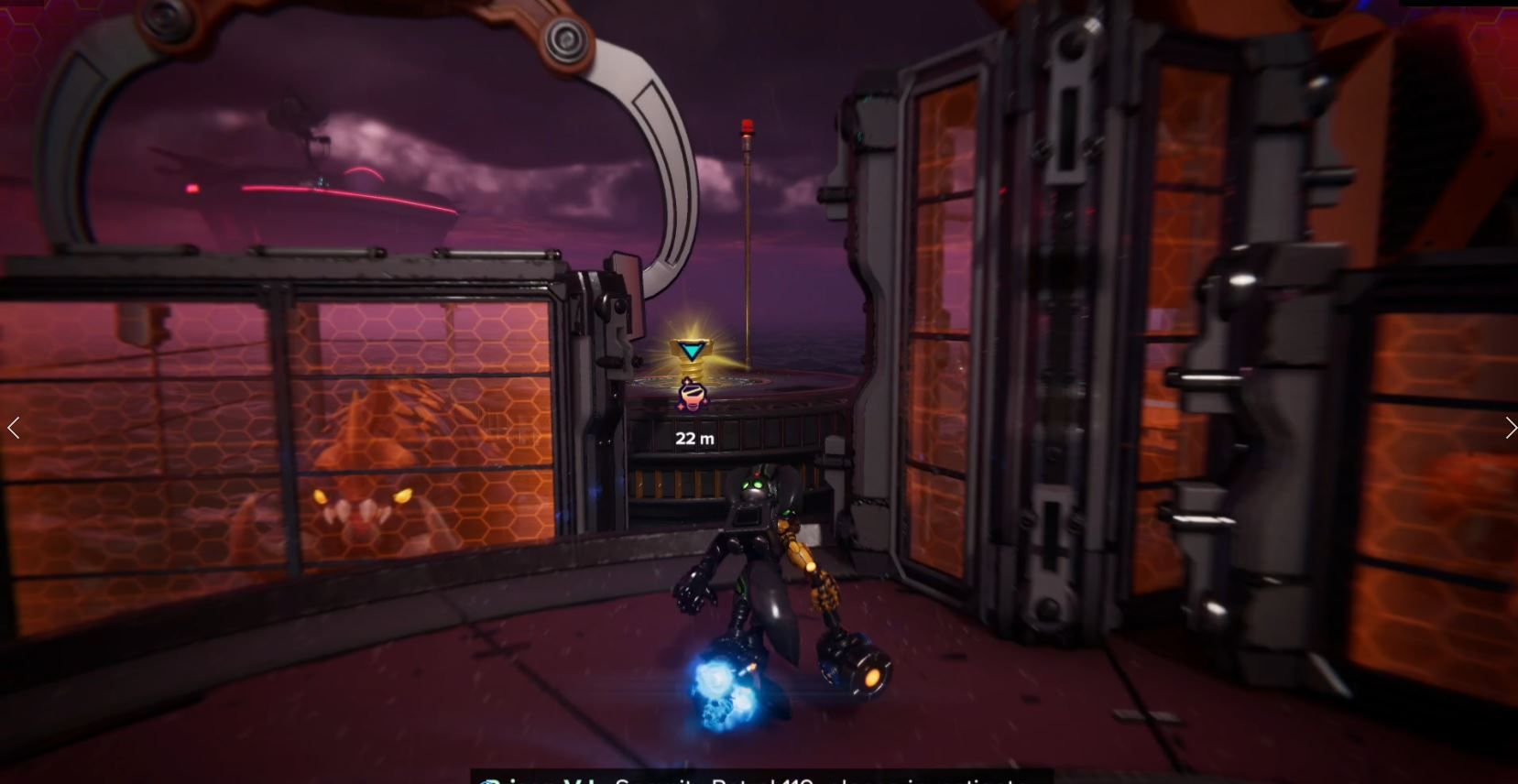 Head back to the main platform, then take a right and walk towards the blue energy bridge. You’ll have to fight a couple more robots before you can cross it. Cross the bridge and head inside where you’ll have to fight a dozen more robots. If you cross to the other side using the rift as soon as you enter this room, you’ll find a Raritanium on the left behind some boxes. Once you’ve killed everything here, exit at the opposite end on the same side of the room you came in on.

outside you’ll find a switch that needs to be activated to make a blue bridge. Kill the Transfer Manager on the other side, but make sure to dodge its sweeping purple beams and artillery strikes. Grab the three Raritanium on your left before jumping and grabbing the containment cell straight ahead with your hurl glove.

Shut Down The Reactor

When the cutscene ends you’ll find yourself at the south entrance to the prison. There are several boxes of Raritanium on the left side of the scaffolding which you can reach from the stairs. Dash through the blue wall and throw your hammer at the green button on the left wall to open the door.

There’s a lot of snipers to fight inside, so use whatever strong, long-rage weapons you have to take them out. Several waves of enemies will come before you’ll be able to move on. When it’s over, head straight forward towards Ratchet’s cell.

After the cutscene, turn left and use the crates to jump up to the second level in cells. In the far left corner, you’ll find this world’s piece of armor. 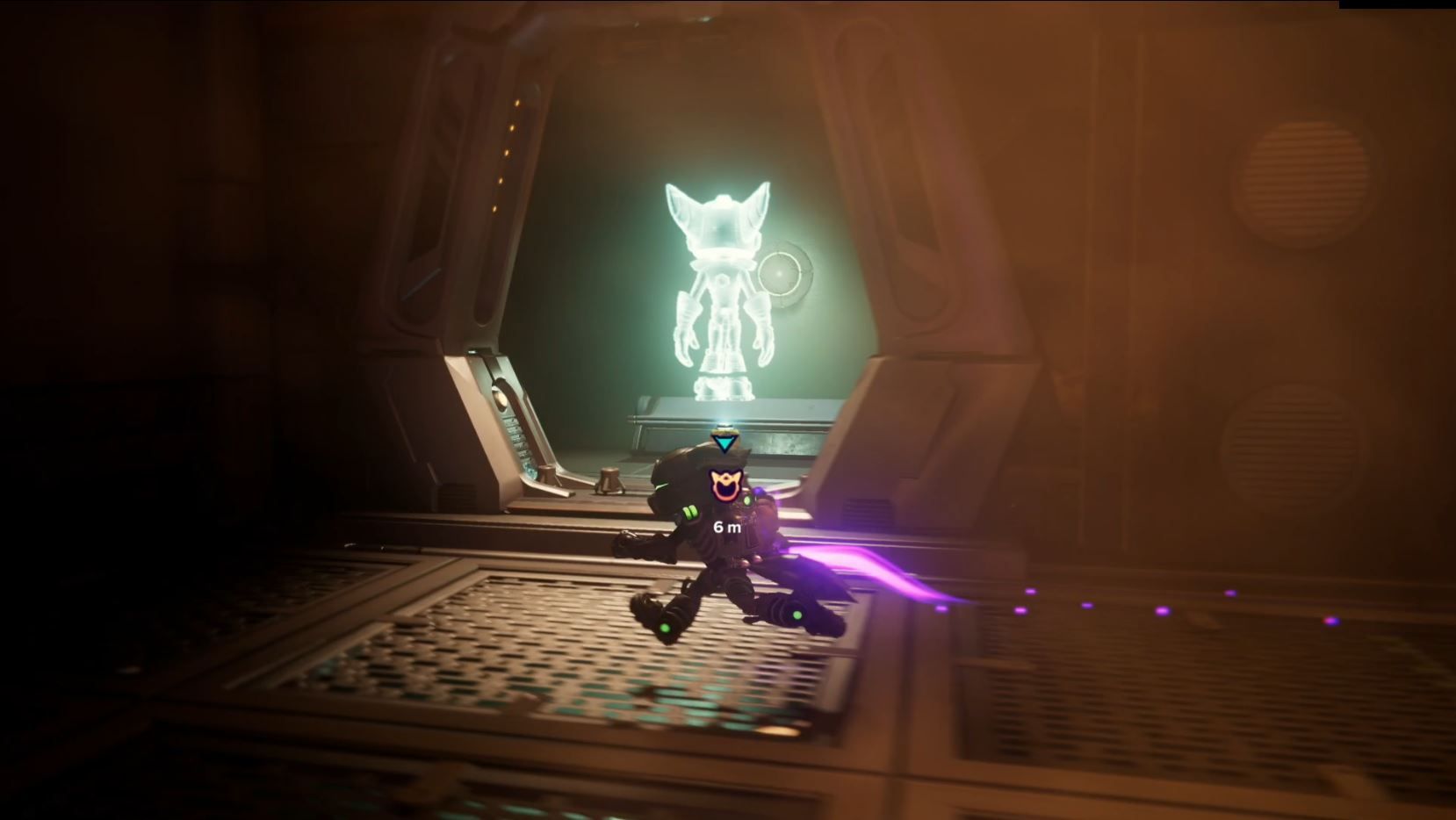 You won’t be able to get any more collectibles here until you go to the Warden’s Office, so walk straight through towards Ms. Zurkon. As you exit, jump over the containers on your right and grab the Rarititanium.

Go through the door on your right, then turn right past the boxes and you’ll find this planet’s one and only pocket dimension

Run across the wall and hit the nest to spawn a Speetle. If you don’t remember how to ride a Speetle, just press triangle to mount it. You’ll need to hold R1 just before you reach the end of a ramp to launch yourself forward far enough to reach the wall. Let the Speetle smash into the wall ahead of you and you’ll automatically run on it. Grab the rift ahead of you and pull yourself through it to land on anotherSpeetle. Repeat this two more times, but on the third wall you’ll need to hurl yourself off a swingpoint onto a platform in the distance. When you land, grab the second piece of armor. Grab the rift in the distance and boost jump back to the entrance.

Shut Down The Reactor

Back in the prison, return to Ms. Zurkon and grab the Raritanium on the box to her right. When you’re done shopping, head up the landing pad and turn right. Beat the robot here then jump onto the biggest block on this platform using the small box in front of it. Turn around and jump on the girder to grab the Raritainum. Jump pack down and head towards the Swingpoint.

Jump, swing, and wall run forward until you see a rift. Pull yourself through this rift and the one after it quickly, the break the fan to enter the Warden’s Office. There’s nothing in here other than the computer terminal, so walk up and activate it to open up the jail cells below.

Return To The V.I.P. Section

Fight all of the robots that break through the glass wall in front of you, then pull yourself through the rift to escape the office. Jump down to the platform below and fight your way back into the prison. Head inside and wait at the security door and wait for the goon to let you in. Everyone in here is busy fighting, so don’t worry about killing anything. Instead, make sure you grab the third gold bolt from the third cell on the left and the Raritanium from the last cell on the left.

Head out the door straight ahead, then pull yourself through the rift on the right. This will cause the platform to fall, so clear the robots and pull yourself up through the rift above you. Now on the center platform, you should see another rift to pull through a bit to your left at eye level. Fight your way through all of the bots on this platform, then use your boots to boost over the ramp and land on the distant platform.

Activate the green computer terminal and fight your way down this hallway until you reach Ratchet and Kit. The Warden will lower the platform you’re on down into Maximum Security. When Ratchets cell disappears, through your hammer at the green buttons on the left and right side of the wall straight ahead. Use your boots to rush down this hallway, ignoring all of the enemies on your path. Keep moving at full speed, dodging the fire and hitting every ramp you see.

Eventually, you’ll come to a big jump but you won’t be able to clear the gap, so pull yourself through the rift ahead as soon as it turns yellow. When you get to the backup generator, turn right and keep going. Hit the booster and ramp towards Ratchet’s cell, then hit the swingpoint and launch yourself onto the arena straight ahead.

This is the big fight, so don’t be afraid to use everything you’ve got. After you clear a few waves you’ll have to fight the Royal Guard Escorts, which are a pair of large ships that like to hit you with rapid-fire attacks. Once all the enemies are gone, head to the very end of the arena where Ratchet’s cell is hanging. Activate the switch underneath him bring the cell down and free your friends.