The Rings of Power opens with a grandiose prologue, taking us on a whistle stop tour of the major events of the First Age for Galadriel and the Ñoldor Elves. Those who have read The Silmarillion will recognise much of this, but for those who haven’t it details the basics of the Elves’ history of strife and how that will come to play a part in the coming narrative. Then, we follow Galadriel to the Forodwaith as she hunts Sauron and his remaining servants in order to avenge her late brother. Galadriel’s motivations to avenge her brother are compelling, although Finrod’s name is never mentioned (I assume it’s a rights issue), which feels more than a little jarring.

The first episode’s opening 15 minutes or so worried me a little, as the fast paced, action-packed sequences feel like the antithesis of Tolkien’s writing. Sure, there are battles and wars, but Tolkien glosses over them to focus on crafting characters, stories, and legends. It’s never more egregious than when Galadriel performs a silly battle maneouvre, using a sword as a springboard to launch herself onto a snow troll as a troop of Elves fight their way north. It’s a brash start, but in the two episodes of The Rings of Power that I was invited to watch, things thankfully calm down and we’re given time to smell the Athelas.

It’s immediately clear that The Rings of Power is all about Galadriel. It may involve an ensemble cast of 22 in starring roles, but this is Galadriel’s story first and foremost, and Morfydd Clark is incredibly capable in the role throughout the first two episodes. Comparisons to Cate Blanchett’s portrayal are inevitable, but this is a different Galadriel. This is the Galadriel who led the Ñoldor to revolution alongside Feanor, boisterous and unrelenting in her quest. We’ve got 48 more episodes to go though, and Elrond is already attempting to temper her warriorhood, so I imagine that by the end of the series she will embody wisdom more than passion, and I can’t wait to see Clark transform the character. 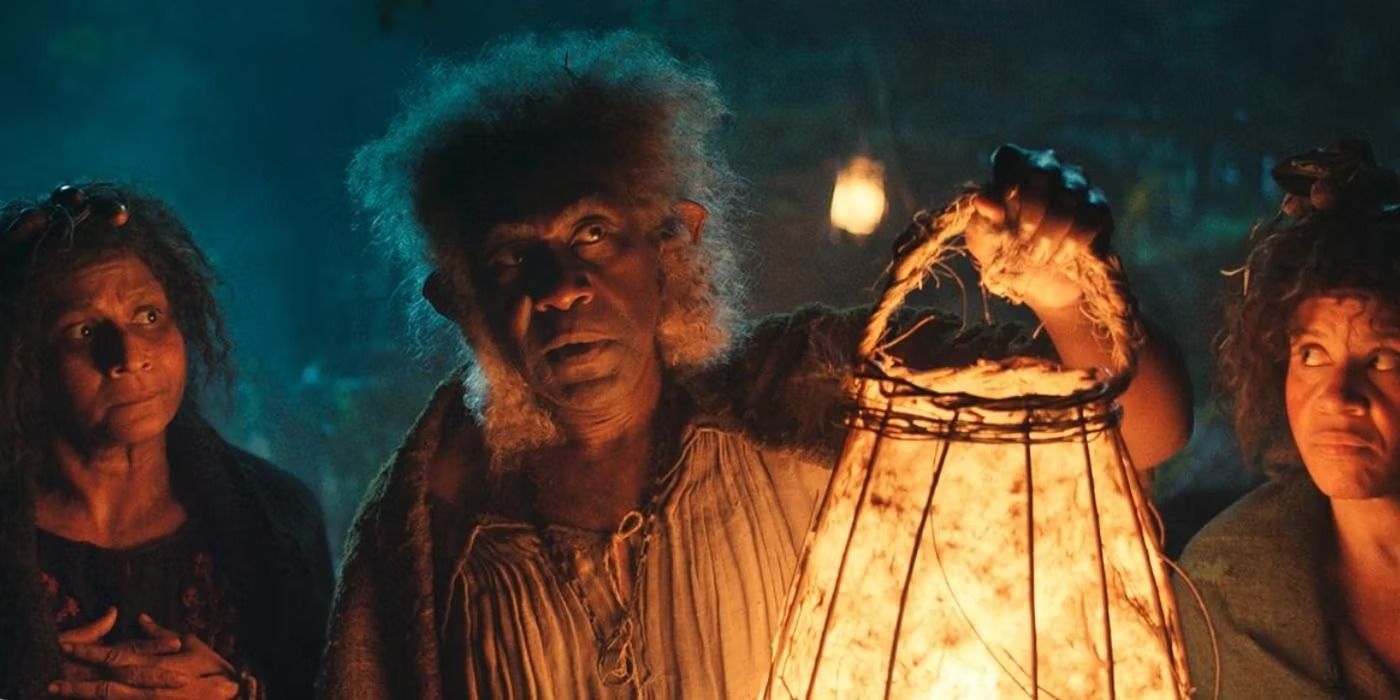 As much as Clark’s Galadriel shines, every narrative thread and individual storyline is compelling and engaging. I particularly like the Harfoots, and adding them to this world is an absolute stroke of genius. It’s an addition aimed at easing the new fans into a complex tale, I’d wager, but Nori Brandyfoot and co. ground a story that risks getting too swept up in the epic plight of the Elves. The details of their nomadic Hobbit holes and quaint traditions are great, and their little world is wonderfully realised through the attention paid to the particulars of their irregular wheels and mossy doors. They also look to be heading for a folk horror-esque festival in the coming episodes, which I can’t wait to see.

It’s in this story that Daniel Weyman’s character, known only as The Stranger, is introduced as a babbling and confused man who falls to Middle-Earth as part of a giant meteor. While the Meteor Man may be rooted in Tolkien’s writings, I’m not sure this character will abide by the lore, as he seems very much to be a wizard. However, Weyman’s performance, especially in his physicality, has made me more curious about his identity than I ever could have expected going in. He’s almost tree-ish in his movements (no, he’s not an Ent), with his body clearly broken by his mighty fall. He stands up in stages and it’s like watching a fern unfold: first rising, then straightening his lower back, then his hunched shoulders, before raising his head to greet the curious Nori. It carries on the tradition of excellent body-acting in Lord of the Rings adaptations.

I was pleasantly surprised by the Arondir and Bronwyn story in the Southlands, despite remaining dubious about adding another Elf/Human love story to Tolkien’s world. My concerns were dealt with explicitly by one of Arondir’s colleagues, which was an amusing if on-the-nose addition but did little to assuage my worries. However, as I keep repeating, this is just the first four percent of The Rings of Power and there are plenty more episodes to explore this relationship, and I expect both characters to grow and their dynamic to evolve as the series goes on. I still have questions and qualms, but given I’ve only seen two episodes thus far, first impressions of the Southlands are still positive. 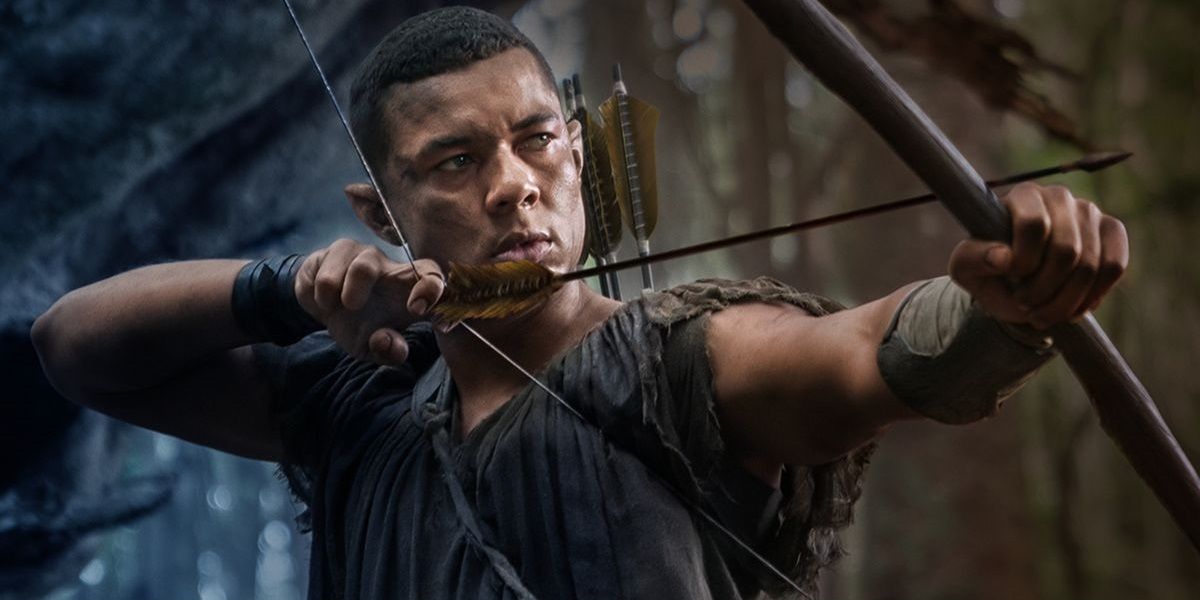 Two particular parts of this storyline stand out as some of my favourite bits of The Rings of Power’s opening episodes. The first is Arondir’s armour, consisting of a stunning carved wooden breastplate that is emblematic of the care put into costumes in the show. It depicts a facade similar to the pagan Green Man, which leaves the viewer with countless questions, mostly on the subject of Ents and whether the Southland Elves fraternise with Tolkien’s iconic tree-herders. This is my favourite piece of craftsmanship in the show, and that’s no mean feat when Feanor’s hammer and the Orc prosthetics look so good. On the subject of Sauron’s denizens, the Orc in the kitchen scene is my other standout moment from the first two episodes, and it’s frankly terrifying. I won’t say too much for fear of spoilers, but the combination of excellent practical effects and classic horror tropes creates the scariest Orc since Gothmog was decapitated by Aragorn.

The Dwarves are played a little too comedic for my liking, Durin especially, but seeing Khazad-dûm in its glorious heyday is spectacular. That feeling goes double for Eregion, and I’m excited to see more scenes in both locations as it feels like we see so little of the Dwarves in particular. Halbrand, one of The Rings of Power’s new characters, only appears briefly in the first two episodes, and we don’t see Númenor at all. This might make you think the pace of the series is slow, but I would argue to the contrary: it sometimes feels like it’s going too fast. There’s a lot going on, and on a few occasions I thought the show cut away from one storyline too soon, with some being given more importance than others. I hope The Rings of Power takes its time, but with the likes of Isildur and Pharazôn still to make an appearance, I can only see things speeding up as we’re expected to hang on tight and come along for the ride. 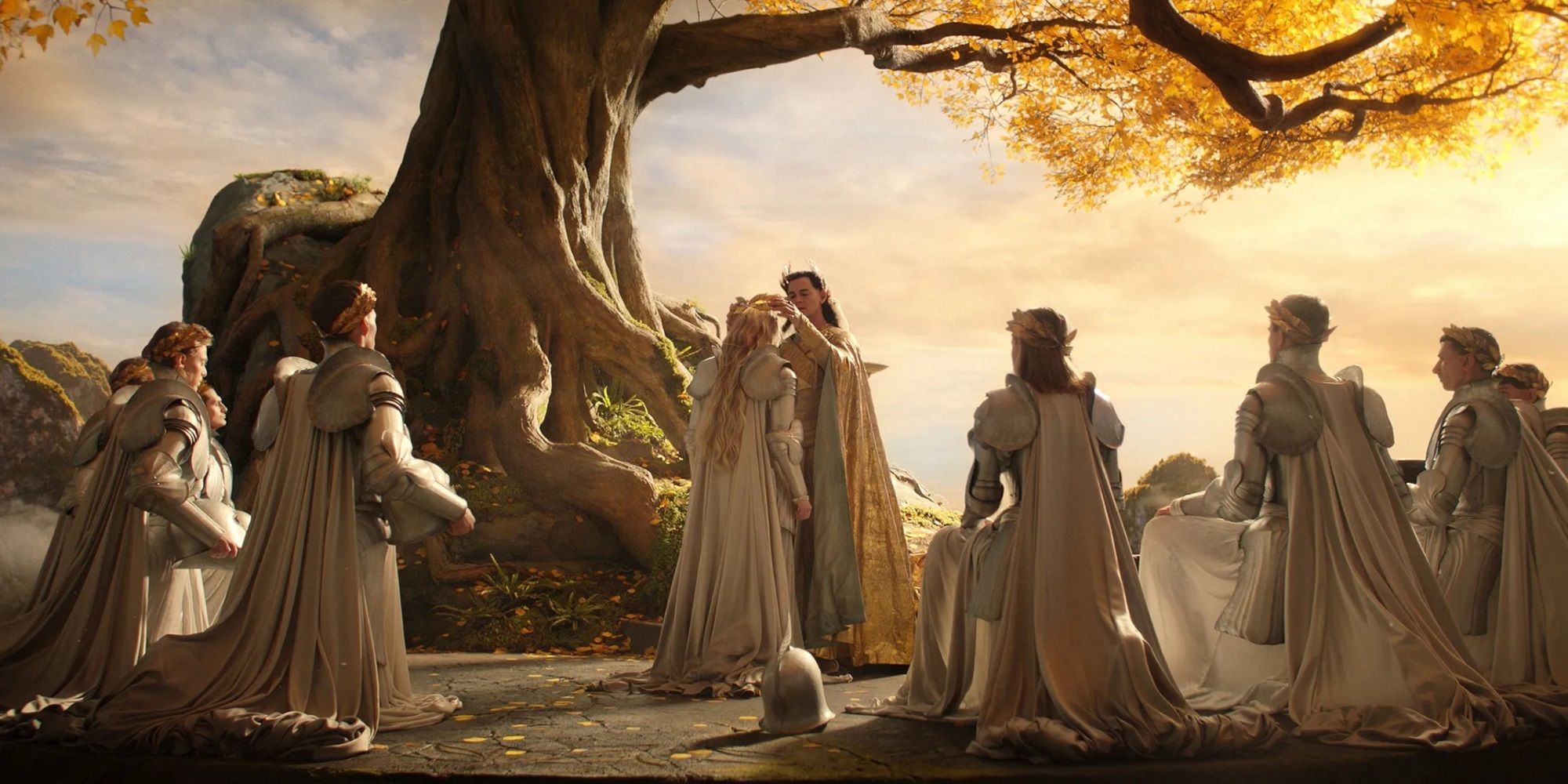 The Rings of Power is off to a promising start, and I can’t wait to see how the first season plays out. Morfydd Clark’s Galadriel is the perfect lead, and there has been great care put into every aspect of the show. From the practical effects, costumes, and props, to the imaginings of Tolkien’s great cities and the stunning shots of the New Zealand landscape that are now synonymous with Middle-earth, it feels like it fits within the universe we know and love. Perhaps it leans a little too heavily on the Jackson inspirations rather than doing its own thing, but this show is targeted to the masses so playing it safe may be the right call for the early episodes.

Some purists will bemoan the few discrepancies and departures from Tolkien’s lore, but none are more egregious than anything in the Jackson, Walsh, and Boyens films that are nigh-universally adored or Tolkien’s own, oft-contradictory writings. When it comes to questioning whether The Rings of Power is true to Tolkien, whether it is loyal to his words and ideals, and whether it’s a worthy adaptation of a sparse chapter in Middle-earth’s history, the truth is thus: two episodes are not enough to know for certain. We might be able to better guess at the end of the first season, but the only time we will know for sure will be after all 50 hours of Second Age action have aired.

Nearly all of the promotional material has been carved from the first two episodes, so the majority of what’s still to come is completely unknown. Most of us know where the story is ultimately headed, but for me, the more that The Rings of Power focuses on Orcs in kitchens and fewer we see on the battlefields, the better it will be.