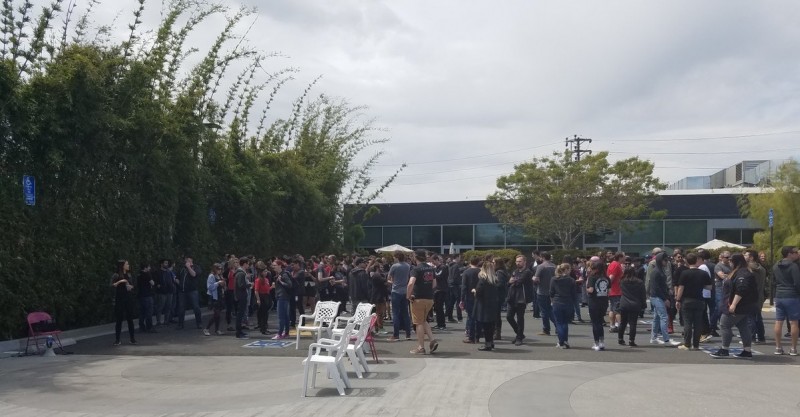 Over the last two weeks, Riot Games has found itself combating its own employees as the company seeks to enact and enforce policies that prevent employees from suing them in sexual harassment and sexual assault lawsuits. The short version is that Riot wants its employees to only be allowed to take them to arbitration, not court, when suing the company over instances of sexual grievances like assault or harassment. While Riot backed off last week by only enforcing arbitration for old employees and making it opt-out for future ones, it still has a host of problems.

Today, Riot Employees in Los Angeles have staged a walkout in protest of this choice. Not only would it dismiss the current suits levied against Riot from former employees, it means current employees would not have the right to take Riot to court in a neutral ground. The employees collectively hope that walking out forces Riot’s hands to reconsider its stance.

At the heart of the walkout isn’t necessarily just the arbitration, but rather the cultural issues at Riot coming to a boil.

“Where you work shouldn’t define how you can use the court system,” one protester told me over direct messages under the condition of anonymity. “Management brought us all together in a room last year and said ‘We hear you, we want to be better.’ Well, here’s your chance. Be better.”

“I don’t think [Riot] learned anything over the last year of bullsh*t,” another employee said. “They put a better PR face on things, they made nice with the media watching them, but their employees are still expendable to them. If anything ever happened to me, I am going to ring the loudest bell I can. The fact that they don’t want me to is almost as big a problem.”

While Riot has said they are willing to meet with employees in small groups, the company has doubled-down on their arbitration requirement for current employees. Employees are considering challenging this idea in court if necessary, but they believe their best chance at stopping this is preventing it from going ahead in the first place. To that end, the walkout is the tip of the spear.

“I don’t think management cares that we’re out here,” one of the employees I talked to said. “But they care that people know they don’t care.”