Captain is a new survivor in Risk of Rain 2 that was first introduced with the 1.0 update. He is a unique survivor, capable of calling down beacons from the UES Safe Travels — you know the ship in the opening cutscene of the game? That’d be Captain’s ship. He was sent on a rescue mission to Petrichor V, with the help of the other survivors.

Using his ability to communicate with the UES Safe Travels, Captain can heal allies and wipe out waves of enemies. He is a great addition to any team, and once you get the hang of him, he is incredibly fun to play as. This guide will help you learn all there is to know about Captain. 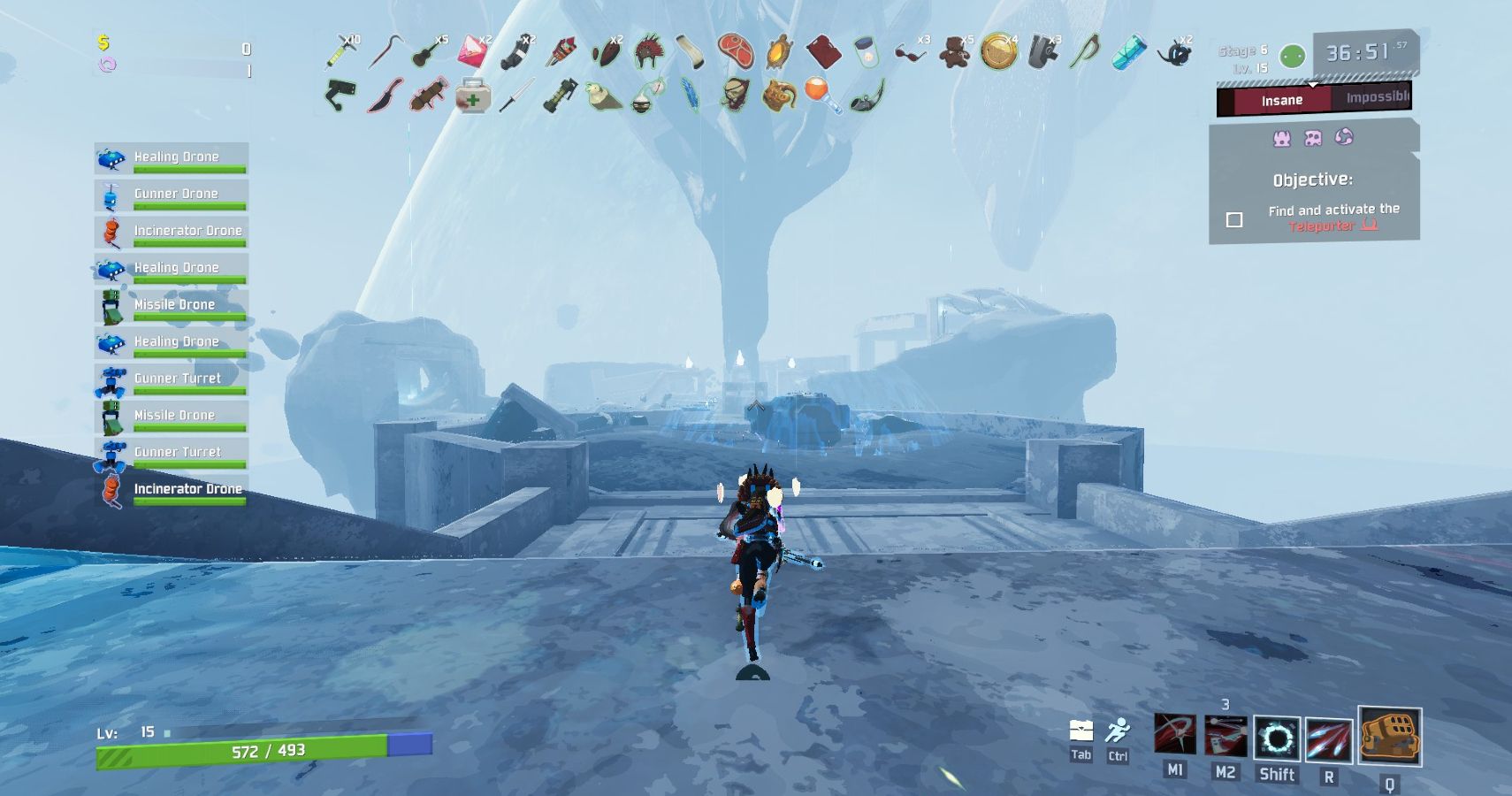 To unlock Captain, all you have to do is beat the final boss, named Mithrix. To get here, you must play through the world until you come to the Sky Meadows. Once here, you will see a different type of teleporter. If you don’t adjust the outer rings, it will bring you to the moon, where Mithrix is. Alternatively, you can adjust the teleporter and loop back through the world.

Fighting Mithrix can be difficult, but there is no requirement for which difficultly you play on. If you want to get this over with to unlock Captain, play as a survivor you are good with and choose the easiest difficulty. 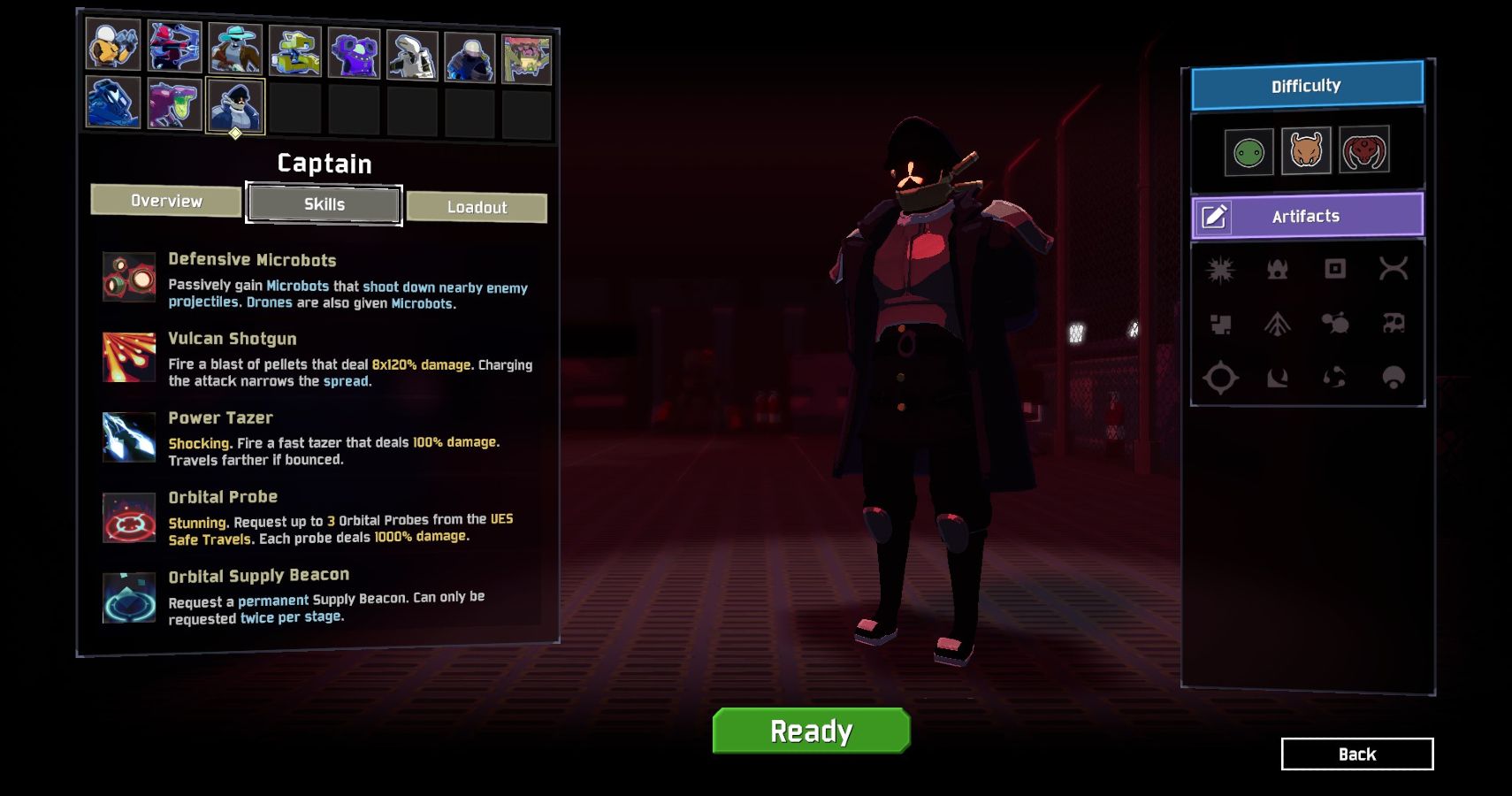 Unlike other survivors, Captain has his own Mircrobot that will protect him from enemy projectile attacks. This is an incredible defensive boon, but the real stars of the show revolve around his ability to call down support from the UES Safe Travels. Here are Captain’s default abilities and what they do.

Healing Beacon: Heal all nearby allies for 10% of their maximum health every second.

Shocking Beakon: Periodically shock all nearby enemies, immobilizing them. 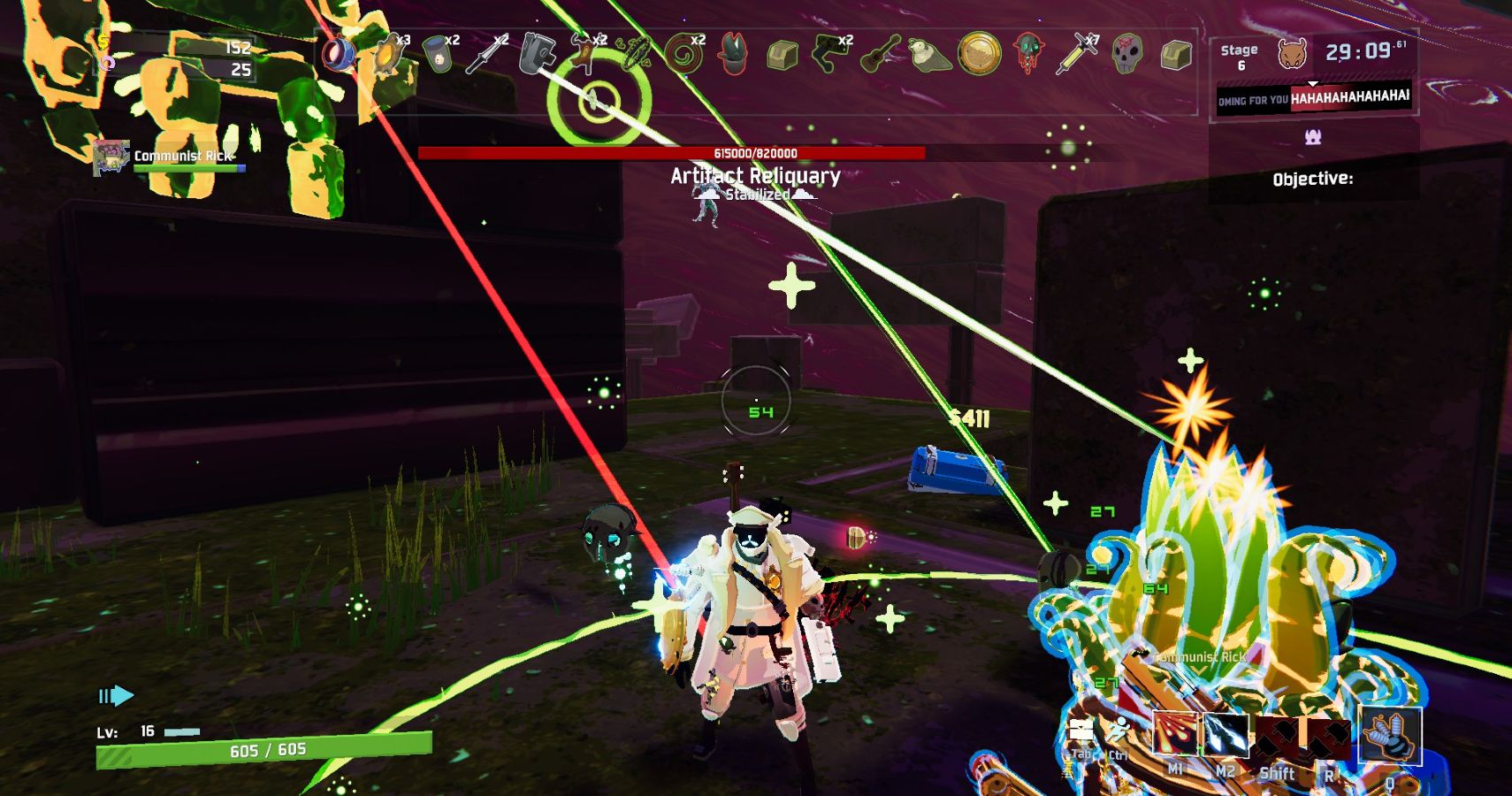 Utility: OGM-72 ‘DIABLO’ Strike. Stunning. Request a kinetic strike from the UES Safe Travels. After 20 seconds, it deals 40,000% damage to ALL characters. Unlock by killing the final boss using a Supply Beacon as Captain.

Resupply Beacon: Recharge Equipment on use. Unlock by visiting 10 different environments in a single run as Captain.

Hacking Beacon: Hack all nearby purchasables to a cost of $0 over time. Unlock by repairing a TC-280 Prototype drone as Captain.

Captain also has an alternative skin that can be obtained by either defeating the final boss or obliterating on Monsoon mode. The skin is called Admiral and makes the Captain’s uniform take on a nautical aesthetic. 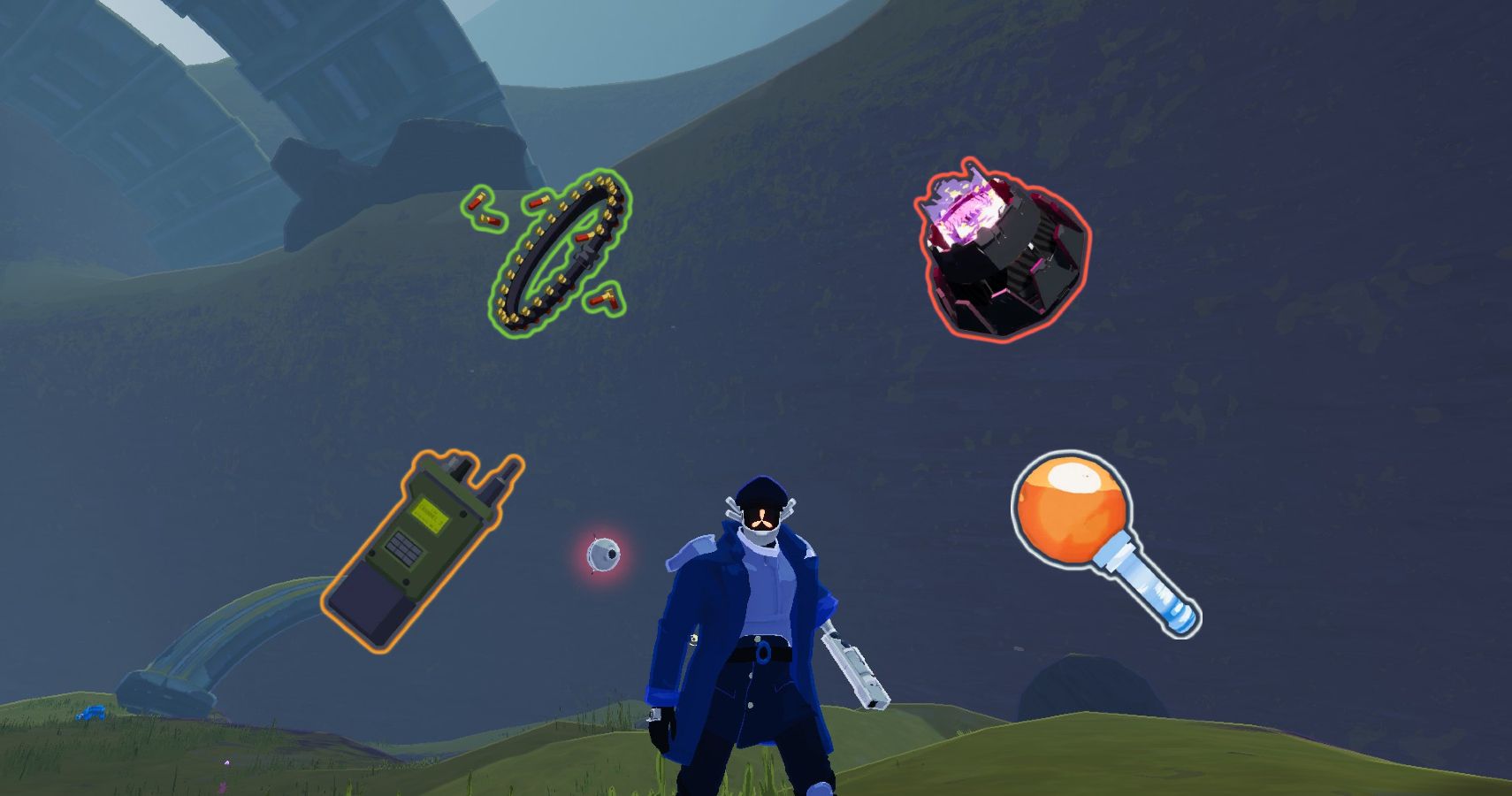 Captain may a support-oriented survivor, but he can expand his capabilities significantly with the right items. He’s a little slow, so you will want to get some mobility items as a rule. He can only call in two beacons per stage, so you will want to collect items that boost attack for his other abilities. Here are some great items for Captain.

Sticky Bomb: This item gives you a 5% chance to stick a bomb to an enemy, dealing 180% total damage. This may not sound like much, but since Captain has a high proc coefficient for his first ability, you have a good chance of sticky bombs attaching. They give extra damage, which is always needed.

Wax Quail: Since Captain isn’t that mobile, it is a good idea to pick up a few Wax Quails. This item will boost you forward 10m if you jump while sprinting.

Backup Magazine: Captain can only use his Special Ability two times per stage, so you will want to pick up a few Backup Magazines to increase the number of times you can use other abilities. This item will add one charge to whichever Secondary Ability he has selected.

Red Whip: As mentioned above, Captain is slow. With the Red Whip, your movement speed will increase by 30% out of combat. This is great for exploring the map, or to make a quick getaway from a group of enemies after managing to disengage from them.

Bandolier: This item gives you an 18% chance to reset the cooldown of all abilities. Bandolier is great for Captain, who has a high cooldown on some abilities. Instead of waiting 40 seconds for the OGM-72 ‘DIABLO’ Strike, find this item.

The Back-up: Captain’s Passive gives every drone he activates a Microbot. This includes the 4 Strike Drones that are summoned with The Back-up. Try to have this equipment to maximize your use of Microbots.

Hardlight Afterburner: This item adds two additional charges to a Utility and decreases the cooldown by 33%. Captain’s default Utility Ability can only be used three times per stage, but this item will increase it to five. Orbital Probe is incredibly strong, so you will definitely want to increase the number of times that you can use it. 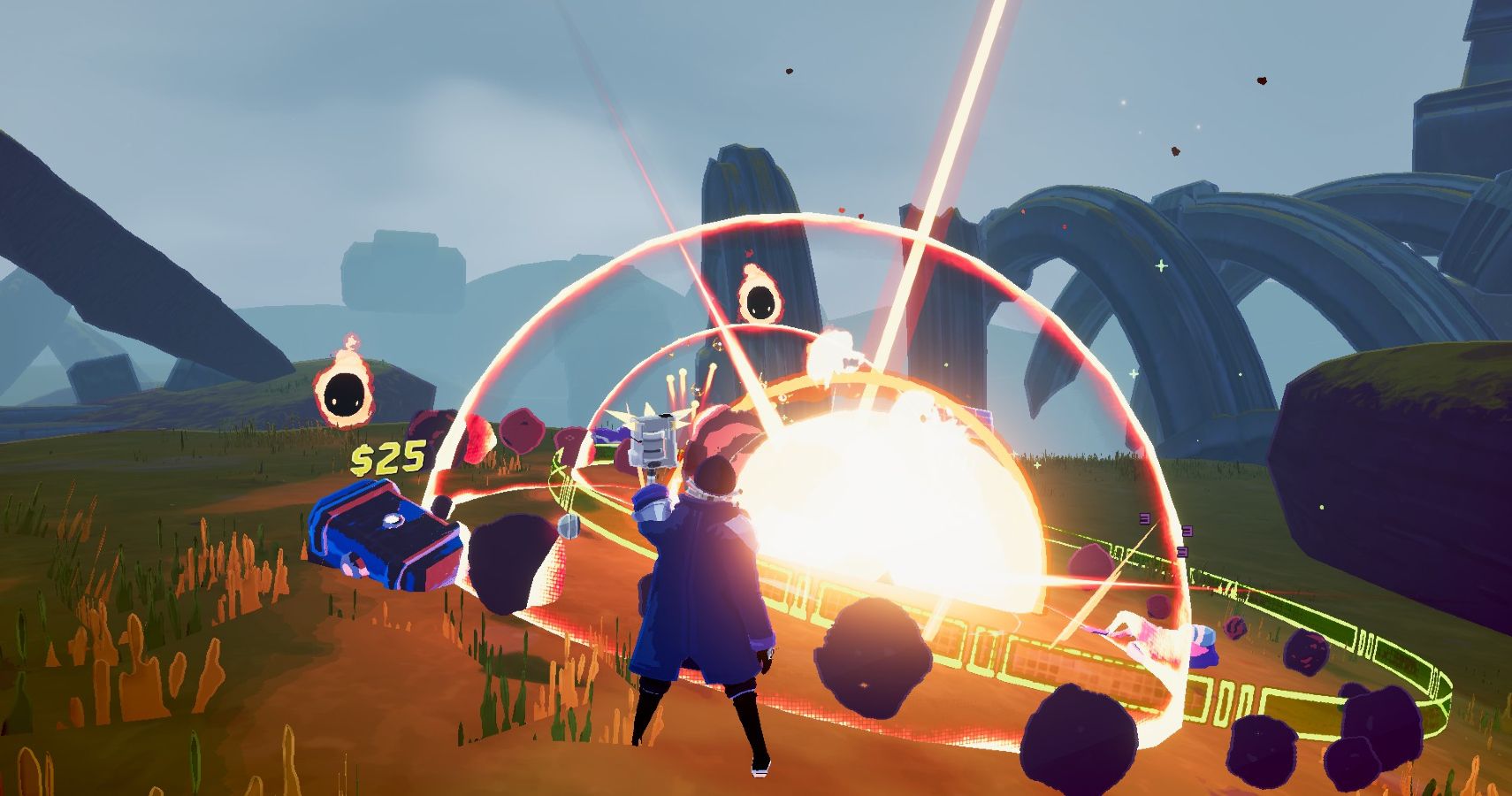 Let’s go over some basic tips for playing as Captain. When you first start a run, you will want to focus on mobility items. His abilities do a fair amount of damage right from the start, so try to find any item that boosts movement speed. It’s hard to know which item you will get, but if you play with the Artifact of Command, you can control which items you get.

Getting legendary items can be difficult, but with Captain’s hacking beacon, you will be able to immediately open the legendary chest without spending any money. The legendary chest spawns after you reach the fourth stage, and is guaranteed to have a legendary item. They can cost a lot of money, but you can hack the chest and get the item for free.

Deciding which of Captain’s abilities to use can be confusing, so let’s look at each ability. Captain only has one Primary, but it’s important to know that you can charge Vulcan Shotgun. Charging the ability will narrow the spread of the bullets. If you are in close range to a group of enemies, you will not want to waste time charging the ability.

For Captain’s Utility, OGM-72 ‘DIABLO’ Strike does way more damage than Orbital Probe. The downside to the strike is that it has a 40-second cooldown, and has a delay of 20 seconds after using it. Orbital Strike has a shorter cooldown, does less damage, and can only be used three times. If you are looking for an insanely powerful ability and do not care about using it immediately, go for OGM-72 ‘DIABLO’ Strike. In general, though, the strike is impractical because you can just use your normal attacks in the 20 seconds that it is delayed for. 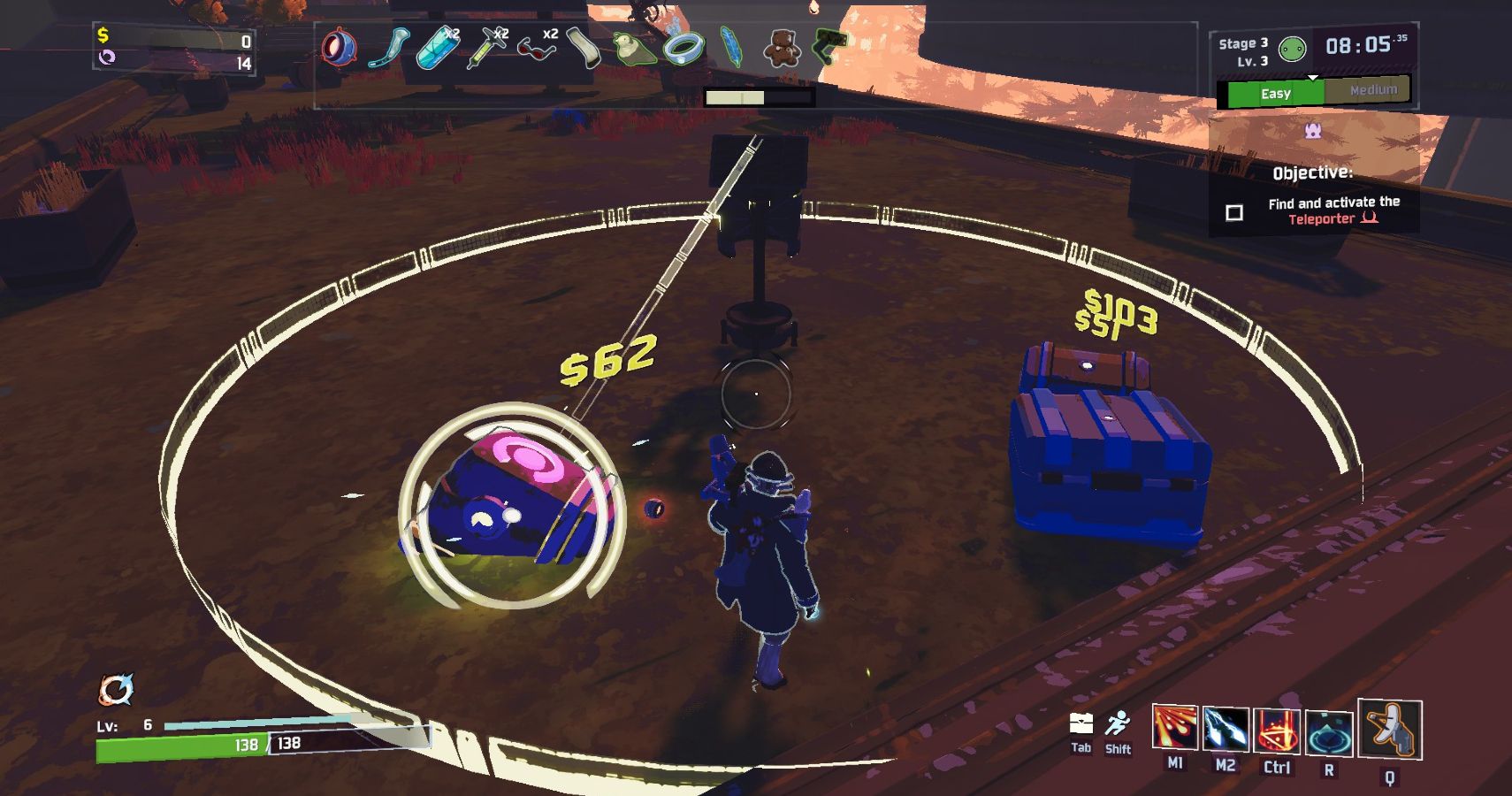 Lastly, let’s look at the four beacons that Captain is able to summon. Above, we learned that the hacking beacon can be used to open the legendary chest. The beacon is helpful when it comes to unlocking chests and purchasable items, but it’s much less effective if you are playing with the Artifact of Sacrifice. This allows items to drop from monsters, but chests will no longer spawn. Do not use the hacking beacon if you have the Artifact of Sacrifice active.

Captain can only have two types of beacons active, but the ones you choose should depend on the type of build you want. If you are looking to have a healing build, then choose the healing beacon. Alternatively, if you want to do a lot of damage and have crowd control utility, choose the shocking beacon — it’s particularly helpful during portal events. You can definitely choose two of the same beacon (for example, having two hacking beacons will make your run go by fast). Overall, it comes down to which one you prefer, because all the beacons are good. The resupply beacon is okay, but there are items to reduce your equipment cooldown, so you should choose a stronger beacon instead.

It is important to note that the shocking beacon stuns the enemies for 3 seconds, but fires every 3 seconds too. This means that enemies can become stun-locked. If you manage to stun-lock a large group of enemies, this would be a good time to use  OGM-72 ‘DIABLO’ Strike.

Now, you should have a basic understanding of how to play Captain. Get out there and take command of the battlefield!