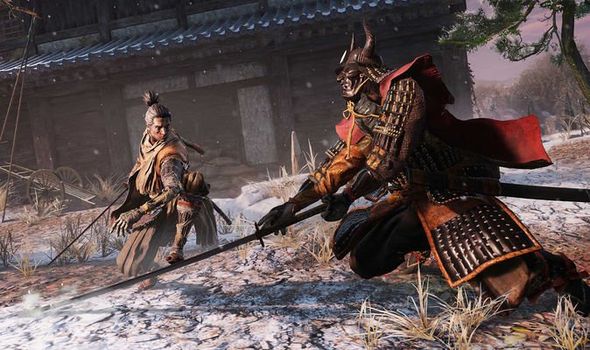 Directed by Hidetaka Miyazaki, the upcoming action game is set in the re-imagined world of late 1500s Sengoku Japan.

According to From Software, you play as the ‘one-armed wolf’, a disgraced and disfigured warrior rescued from the brink of death.

You’ll use a grappling hook to traverse the environment and get the drop on enemies, and can even take advantage of a new resurrection technique to immediately come back to life and deceive your foes.

To say that we’re excited about Sekiro Shadows Die Twice would be an understatement. This is, after all, the new game from the studio responsible for masterpieces like Demon’s Souls, Dark Souls and more recently, Bloodborne.

Unfortunately, however, Sekiro Shadows Die Twice does have one pretty significant problem: it’s not Bloodborne.

From Software’s pièce de résistance, its jewel in the crown, its magnum opus, it’s difficult to imagine anything reaching the same heady heights as Bloodborne.

Combining gothic horror with a healthy dollop of Lovecraftian terror, Bloodborne begins with players hunting beasts, but transforms into something altogether more horrifying.

A cryptic statement here, a lifeless corpse there, a giant ten-limbed monster clinging to the side of a church somewhere else, players are drip-fed the game’s story as they journey through the dangerous streets of Yharnam.

Enemy encounters provide the same challenge and inspire the same sense of dread as Dark Souls, only this time there’s a new rally system that lets you recover health if you strike quickly.

This inspired new system encourages players to adopt a much more aggressive playstyle compared to Dark Souls, creating a risk vs reward dynamic that’s immediately more gratifying than its forebears.

The lore, the art style, the soundtrack, the enemy design, the bosses, the transforming trick weapons, the NPCs, the hidden areas, the DLC and even the spinoff merch, everything about Bloodborne is just perfect.

Don’t believe me? Check out VaatiVidya’s YouTube channel, or read Damien Mecheri and Sylvain Romieu’s excellent Beyond the Grave Volume 2 for a more detailed look at what makes Bloodborne so great.

And as much as I’m looking forward to Sekiro, I do worry that my inevitable comparisons to Bloodborne will potentially ruin things.

Has From Software’s formula finally peaked? Can the studio ever reach those same heights again?

Of course, there was a time when I didn’t think any game could eclipse Dark Souls, and then Bloodborne came along.

If any studio can exceed expectations it’s From Software, so here’s hoping Sekiro Shadows Die Twice manages to do just that.