One of Skyrim's most memorable moments involves picking up a seemingly innocuous object. As soon as it enters your bulging pockets, you are subjected to a loud, grating, and nagging voice ordering you to bring the object back to a deity's shrine. It may not be apparent, but this is the start of a Daedric quest.

The quest itself is a dungeon crawl through a desecrated temple infested by undead shades led by a necromancer. As with all the Daedric quests, you are rewarded with a powerful artifact of dubious origins. If you are stuck in the bowels of Mount Kilkreath, use this guide. 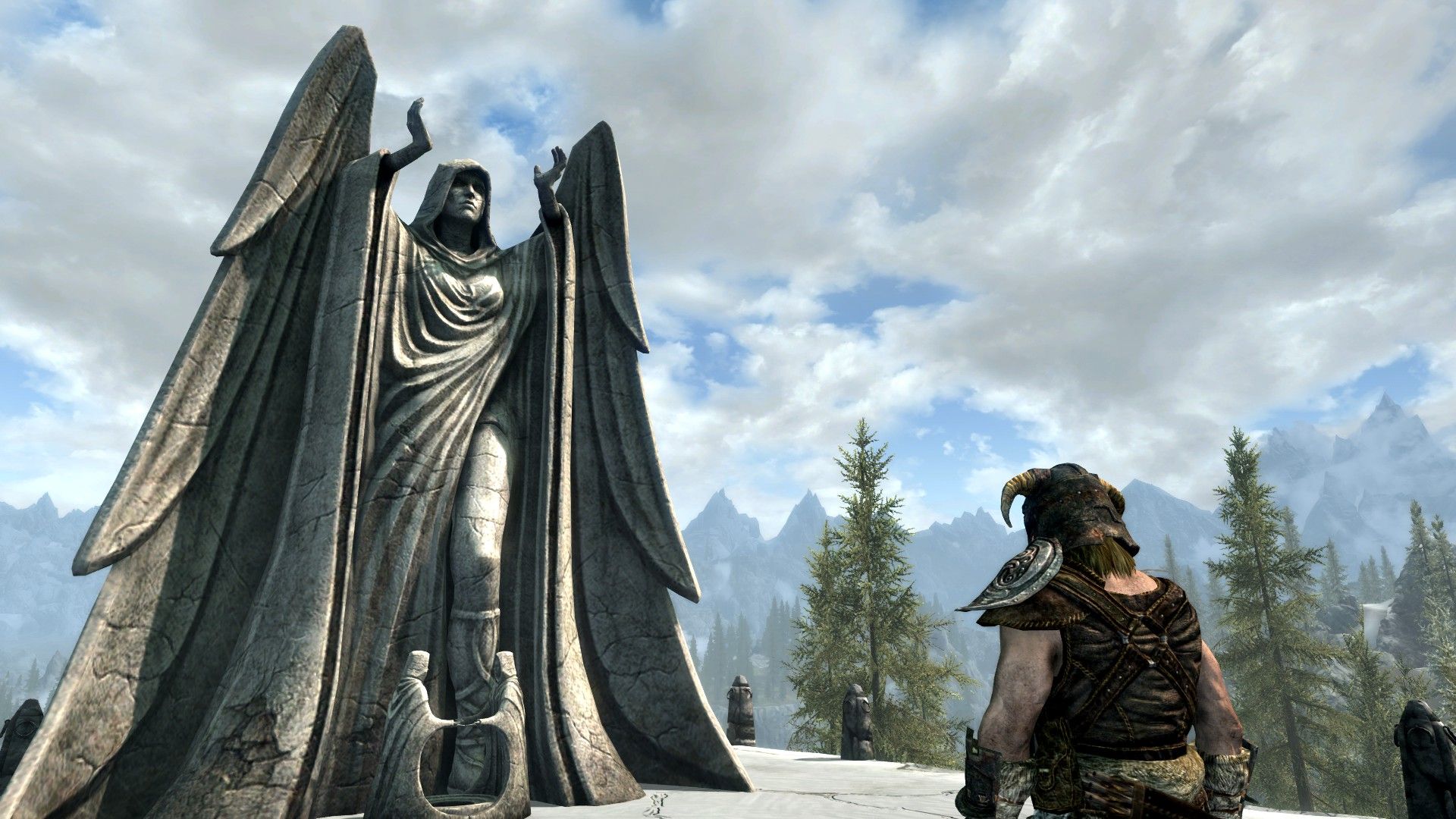 There are two ways to start this quest. The first is to play Skyrim normally and clear out dungeons. Once you reach level ten, the loot at the end of a dungeon may contain Meridia's Beacon.

Picking it up will have the Daedric Prince of Life bombard you with a demand to cleanse her temple of a necromancer. As a being that despises the undead, she will not suffer the insult.

If you had thought that the Beacon was clutter and left it in a chest, visiting her Shrine will give you a quest marker to the object, allowing you to continue with the quest.

The second way would be to visit her shrine located by the road between Solitude and Dragon Bridge. Speaking to the statue will start the quest and point you to a dungeon where you find the Beacon.

She gives you the next instructions when you return the Beacon to her statue. You will have to guide a beam of light through the desecrated temple to restore it to glory.

Walk down the hill to reach the entrance to Kilkreath Temple. 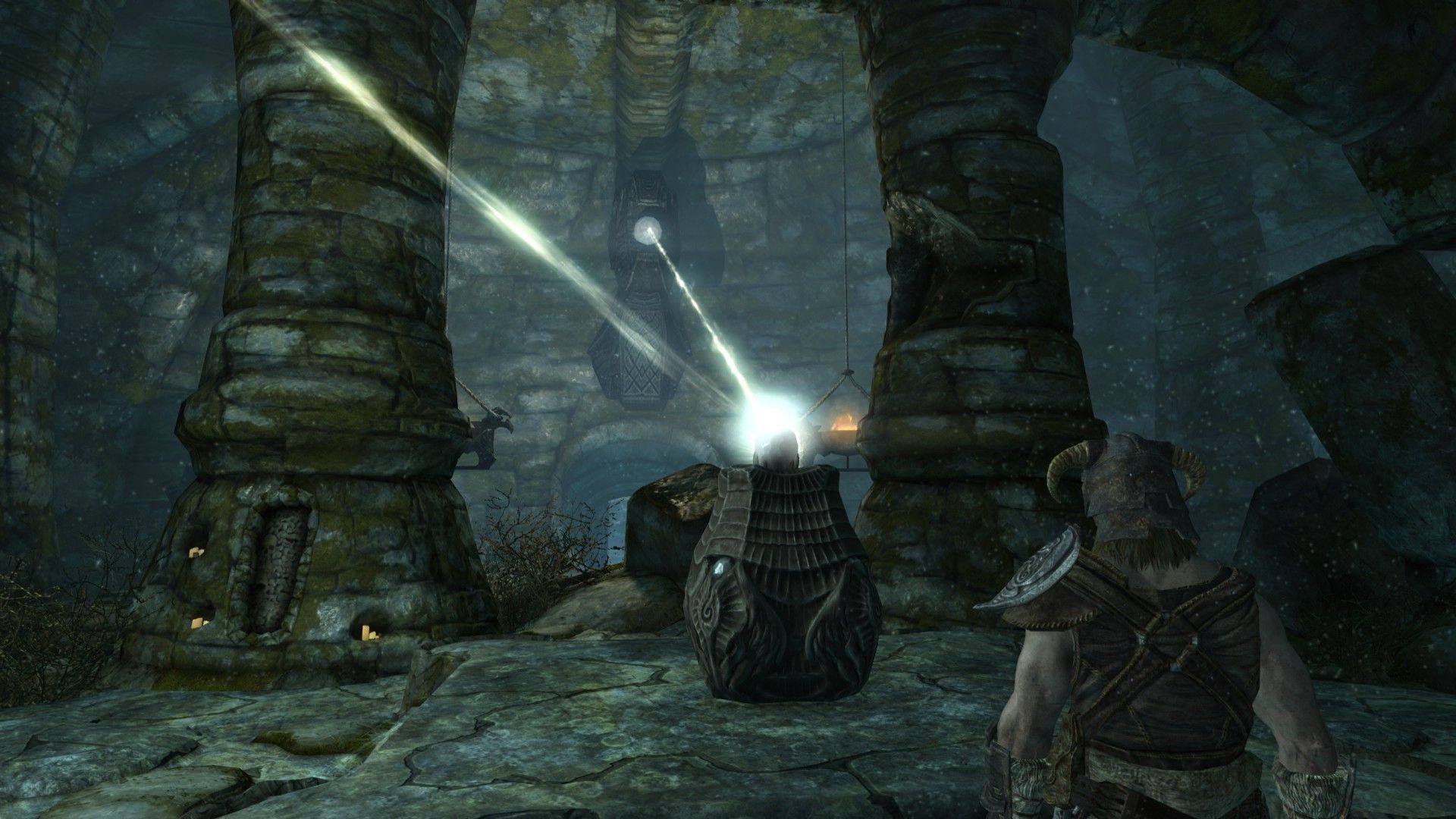 Kilkreath Temple is filled with the desecrated corpses of the necromancer's victims and their hostile shades. You will need to fight them as you raise pedestals throughout the temple to clear the way ahead.

The first room familiarizes you with this mechanic. Walk to the pedestal and interact with it. Doing so will reflect the beam to the next beacon and open a door on the south side of the room.

In case you are curious, walking through the beams will deal Shock damage over time and very quickly.

Go through that room to find a short hallway with a handful of shades. At the very end, you will reach another room with a single pedestal at the center. Interact with the pedestal to open a door to Kilkreath Balcony.

The Balcony itself lacks enemies, though watching the beacons will show you the light spreading through the temple. There is also a large, locked chest by the final set of stairs that contains leveled loot. 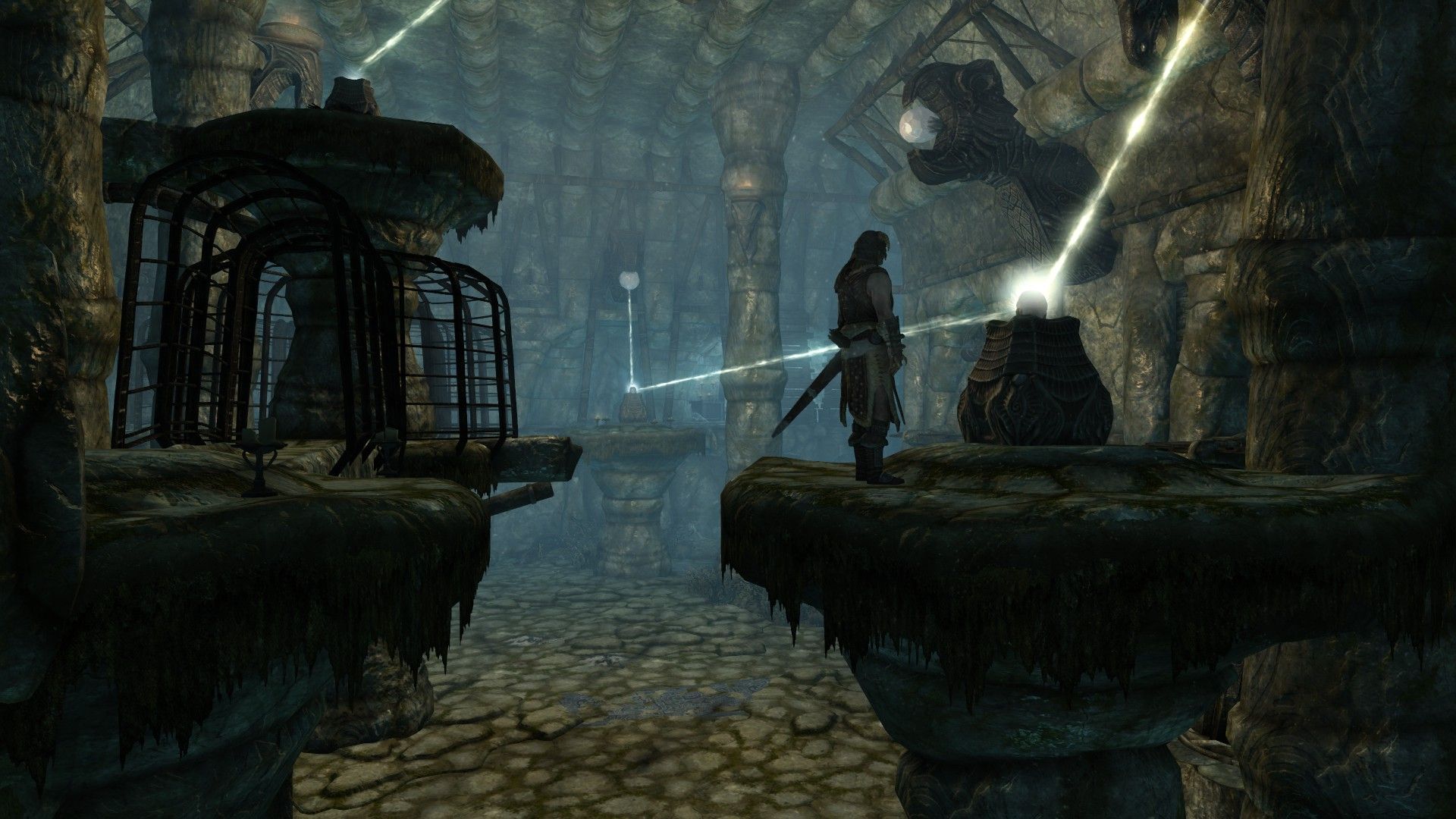 Kilkreath Ruins is where the temple gets a little confusing. Start by clearing out the Shades spread throughout the room. Go to the east pedestal, up a set of stairs to open a doorway next to it. This brings you to a long hallway with a few more Shades.

Keep your eyes peeled for an axe trap in the middle of the hallway.

At the very end, you will be able to reach the next pedestal that is isolated and without any connections to adjacent platforms. While it may look impassable, sprinting across will get you to the pedestal. Interact with it to open the path to the next pedestal. There will be no need to leap across; it is connected to the rest of the room by a doorway on the west.

Finally, go through the door and fight another Shade. Go up a set of stairs to the east to reach the final pedestal. Interacting with it will open the path to Kilkreath Catacombs. 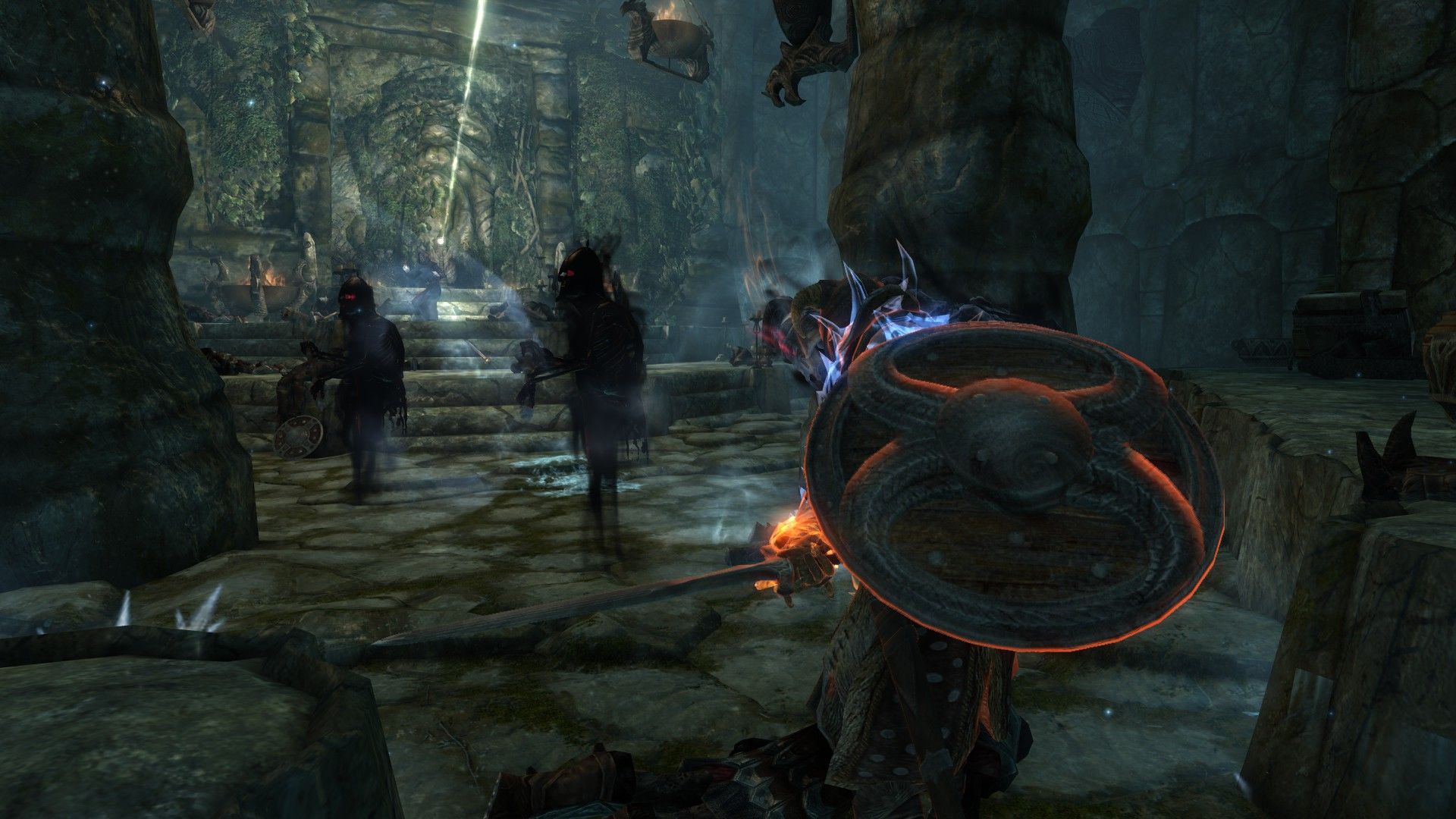 The final part of the quest needs you to defeat the necromancer Malkoran, the one responsible for desecrating the temple. Not only is he surrounded by several Shades, but he is also capable of casting powerful Frost magic and is not afraid to use it.

Malkoran will stay at the altar throughout the fight to sling magic from relative safety, thanks to the Shades separating you. If you can keep the Shades distracted, it is possible to snipe Malkoran before continuing.

Once defeated, Malkoran will transform into a Shade and immediately resume attacking you. Be prepared for this and top up your health prior to defeating him. Vanquish him a second time to satisfy Meridia. 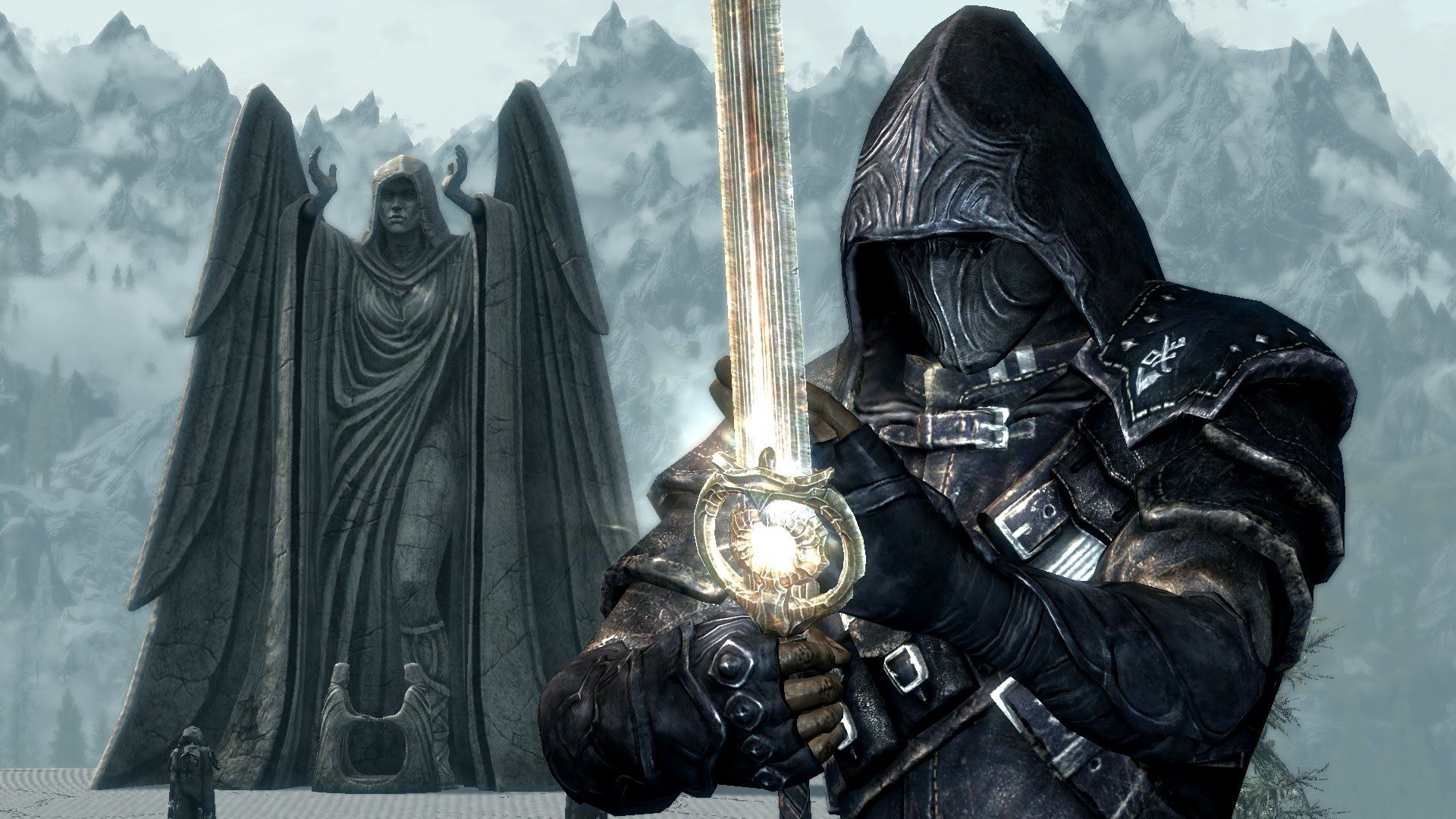 At the very end, Meridia will ask you to pick up Dawnbreaker from the altar. Once again, she lifts you to the sky, where she declares you her champion. Regardless of how you answer, she returns you to the ground with a new weapon in hand.

Dawnbreaker is a powerful one-handed sword that excels against the undead. Its unique enchantment deals ten points of fire damage to the target. If an undead foe was defeated using its enchantment, there is a chance for it to explode. Nearby undead will be set alight and may suffer the effects of Turn Undead.

As vampires are considered undead, the explosion will damage and possibly kill you. It will also affect undead allies such as Serana.

The weapon can be improved with ebony ingots at a grindstone with the Arcane Blacksmith perk.