The Elder Scrolls 5: Skyrim is filled to the brim with many different types of weapons that you can wield during your adventure across the open-world video game tundra. There are both one-handed and two-handed types of melee weapons, and inside of these weapon types, there are unique weapons that can only be acquired once.

Maces are a type of one-handed weapon that is common throughout Tamriel, and they have many different variants that you can obtain through crafting, buying from a merchant, and adventuring inside of the dungeons in Skyrim. There are many powerful variants of maces and even a few unique weapons of this type that either has a special effect, a unique appearance, or both. 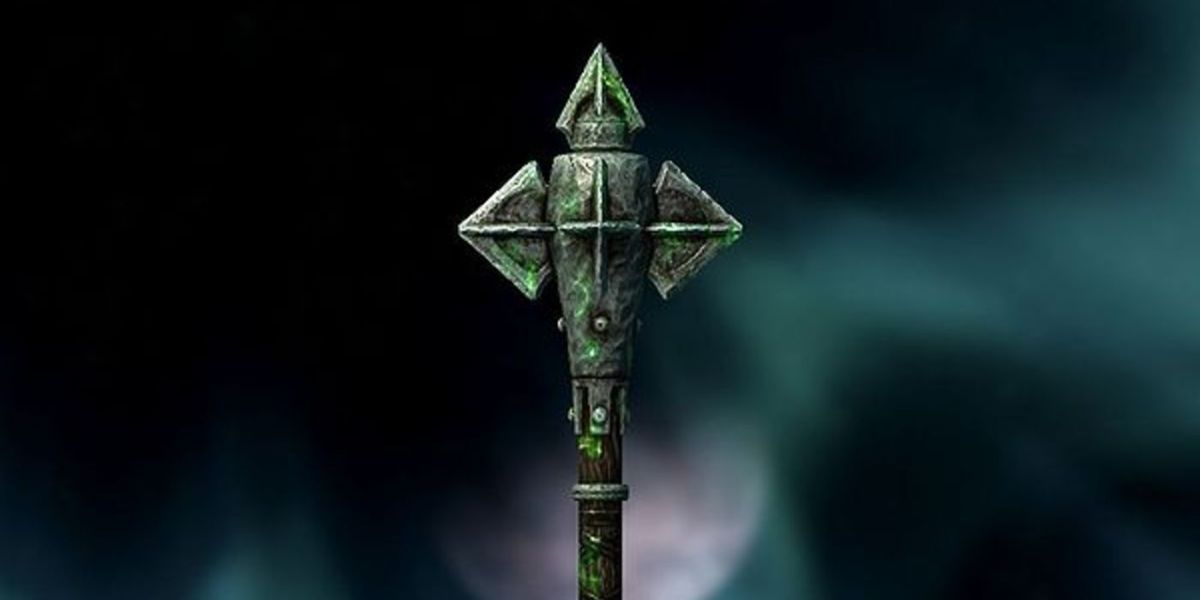 Steel weapons aren’t particularly powerful in Skyrim; however, the lunar version of this weapon has a unique effect that every Skyrim adventurer should collect if they get the chance. This enchantment adds an effect that deals extra fire damage towards enemies, but only during the night.

A weapon like this is perfect for a vampire build since vampires are weak against the sun; however, it is also perfect for every other type of build as well since regardless of what type of character you have, fire damage is always a powerful effect. This weapon is found at the Silent Moons Camp. 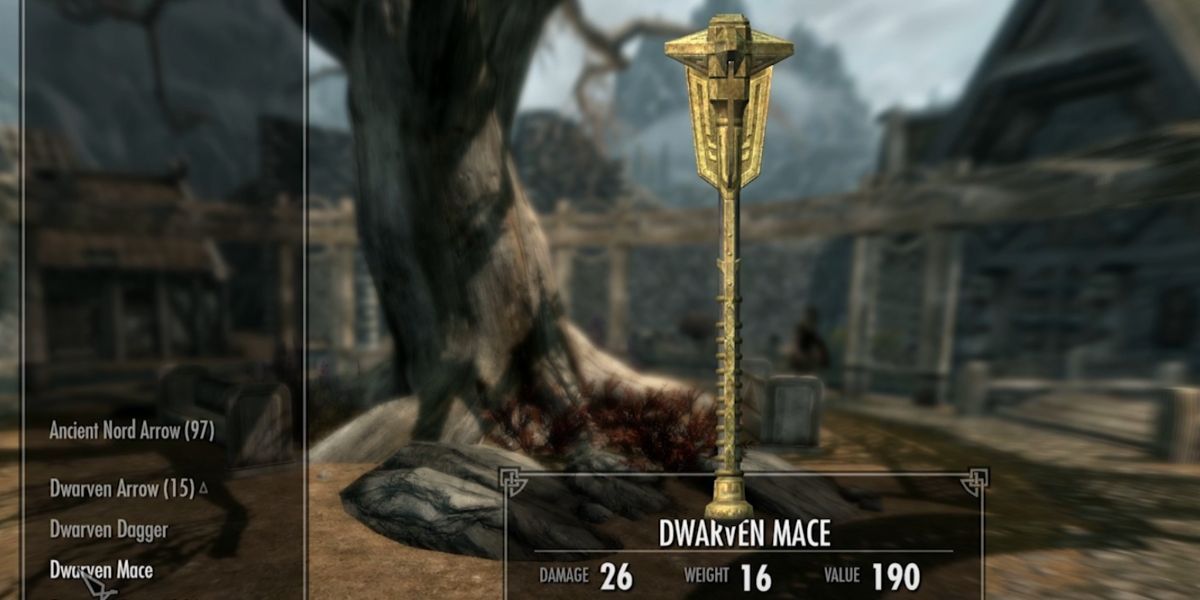 The dwarven mace is one of the best-looking maces in Skyrim because it was forged using a unique technique that was originally created by the Dwarven race, which disappeared from Tamriel long ago. Not much is known about the Dwarves; however, they left behind many different artifacts, including battle equipment such as weapons and armor.

The beautiful design of Dwarven weapons and armor is simply breathtaking, and you won’t find any other style like it in Skyrim. Dwarven maces have a base damage of 12. 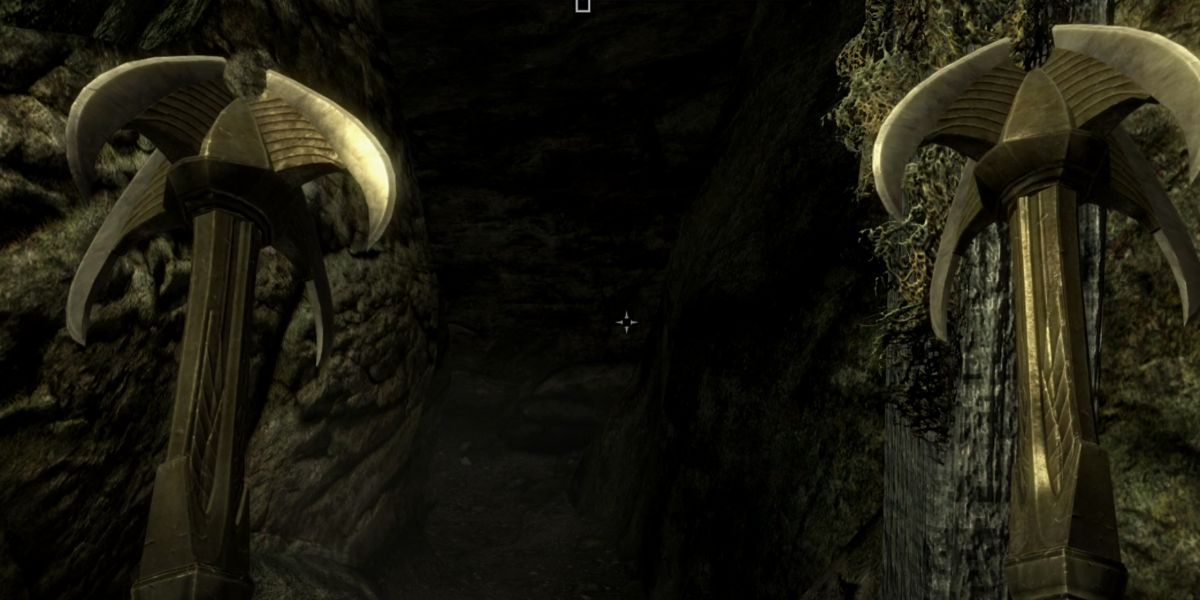 Similar to the dwarven mace, the elven mace is a type of weapon that is created using a racial style that the Elves created long before the events of Skyrim.

Although this mace isn’t quite as powerful as a Daedric or ebony mace in terms of damage, its physical design is quite elegant, and players that want a mace that isn’t very rugged should either smith or buy one of these weapons. The elven mace deals 13 base damage. 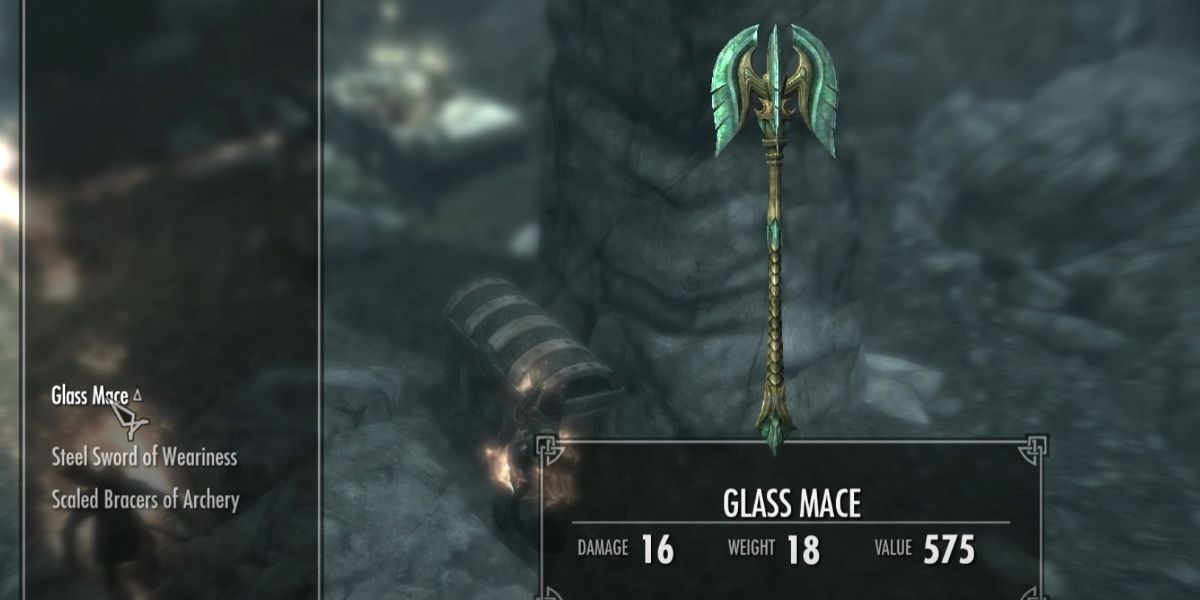 Although the glass mace may sound like a fragile weapon, it is actually one of the strongest types of maces in Skyrim. On top of its strength, the glass mace is also very fun to use because it has a design that looks just like glass, but it doesn’t even get a scratch when it hits an enemy.

The glass mace deals 14 base damage towards enemies, and it is also one of the rarer maces to find throughout Skyrim and its expansions. 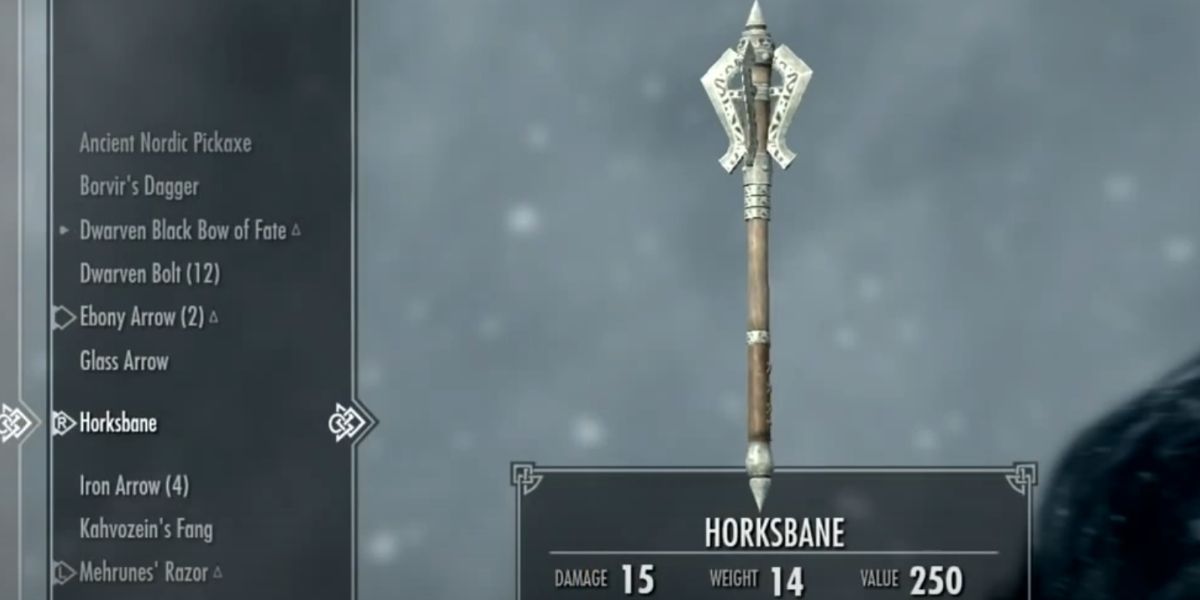 Horksbane is a weapon that was added in the Dragonborn DLC, and it is one of the only maces in Skyrim that has a unique effect and name.

Horksbane may only be a steel weapon, but it has an effect that grants it extra damage towards horkers, and this effect comes in handy while fighting the horkers that reside on Solstheim. Horksbane is found on Horker Island. 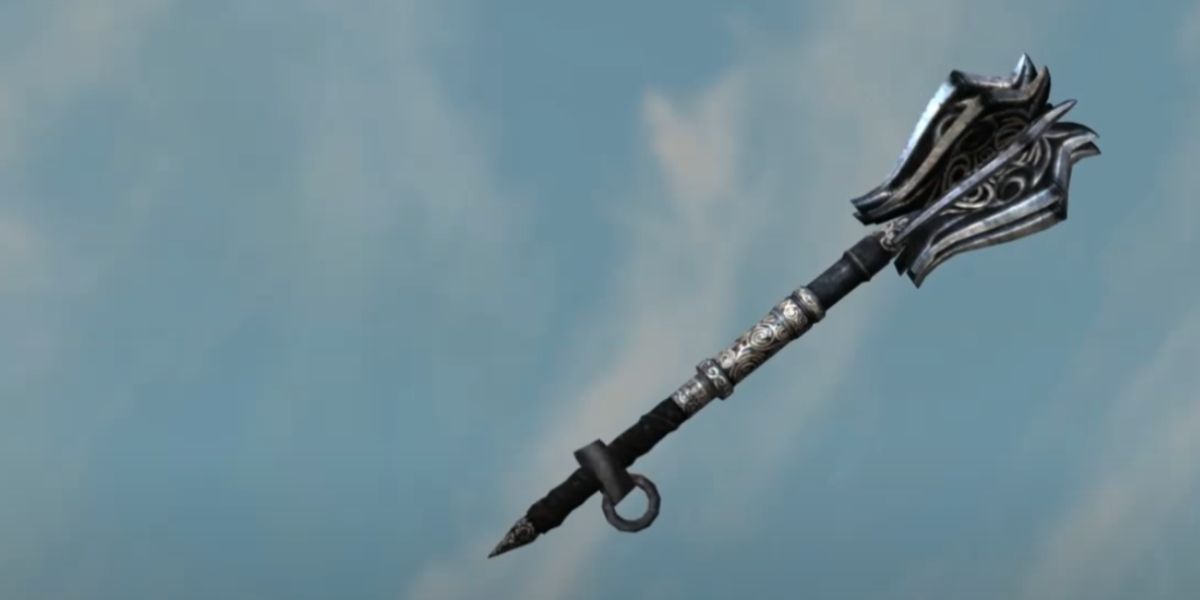 The ebony mace is an interesting weapon because although it isn’t the strongest mace in Skyrim, it is common enough at high levels in Skyrim that most players have used an ebony weapon at least a few times during their adventures.

The ebony mace deals 15 base damage and can be found in dungeons all throughout Skyrim and Solstheim. Look out for special enchanted versions of this weapon since they are so common at high levels. 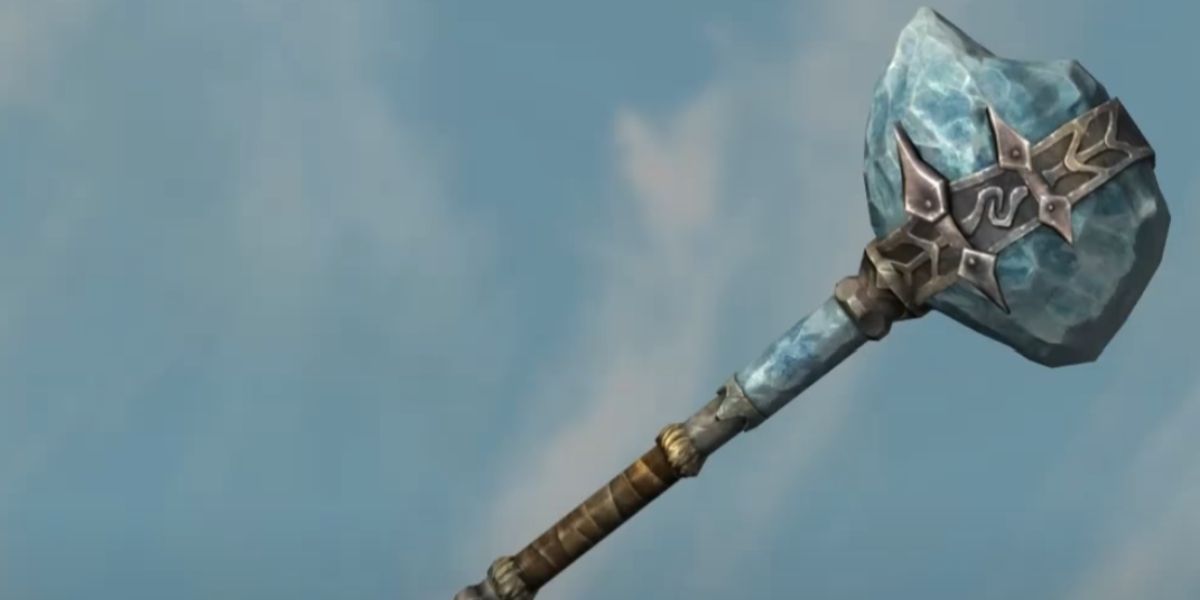 The stalhrim mace deals 16 base damage and was added into the game with the Dragonborn DLC. This weapon isn’t much more powerful than an ebony mace; however, its appearance is much more unique because it is made out of a special type of ore that is only found on Solstheim.

The stalhrim mace and other weapons in the set are hard to obtain because it requires a smithing level of 80, which takes a very long time to obtain. Even so, it is worth grinding your smithing skill for this beautiful mace. 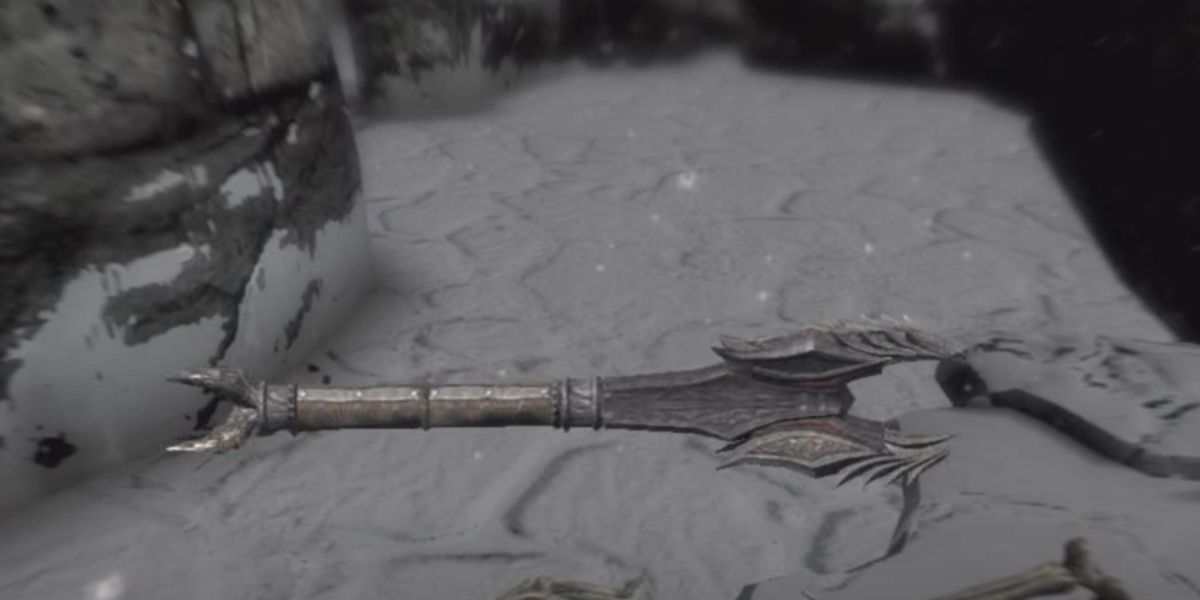 Daedric weapons are incredibly rare in the Elder Scrolls franchise, and this is because they are one of the strongest weapon types in Tamriel. Along with their powerful stats, Daedric weapons also have unique appearances that are favorable to most players.

The Daedric mace has a base damage of 16 and a demonic appearance. Although obtaining one of these weapons requires either a high level or a high smithing skill, it is worth all the effort to have one of the best maces in Skyrim. 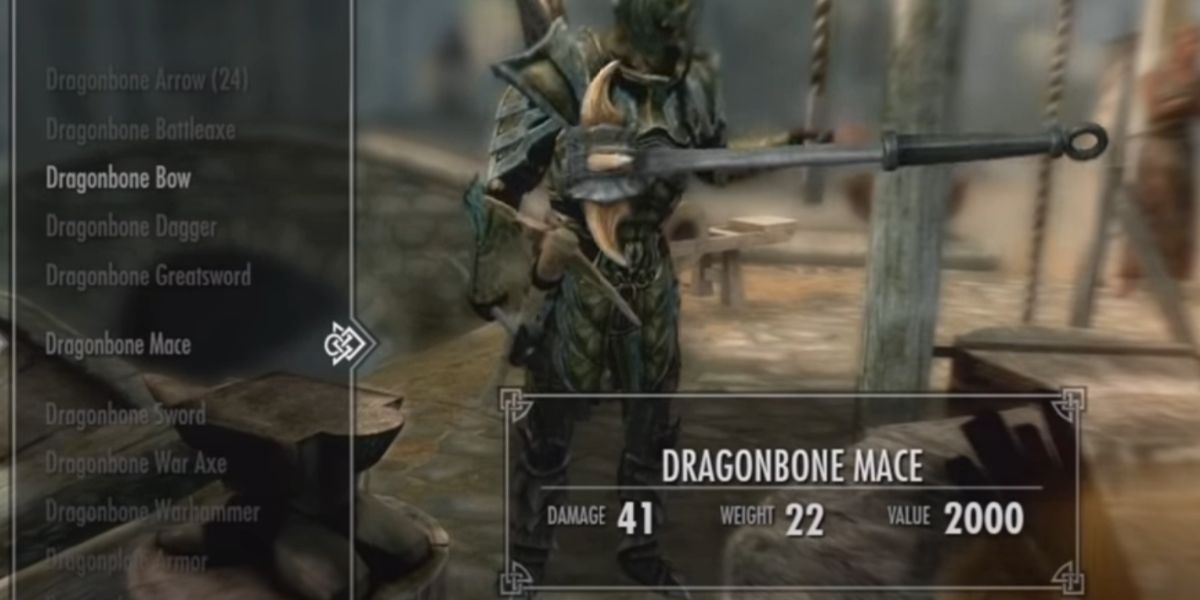 The dragonbone mace was added to Skyrim in the Dawnguard DLC along with the rest of the dragonbone equipment. Crafting one of these weapons requires you to have a smithing skill of 100, which is a very high requirement considering how long it takes to level up the smithing skill in Skyrim.

The dragonbone mace has a base damage of 17, which is the highest base damage of any unenchanted mace in the entirety of the game. This stat alone makes obtaining one of these weapons completely worth it. 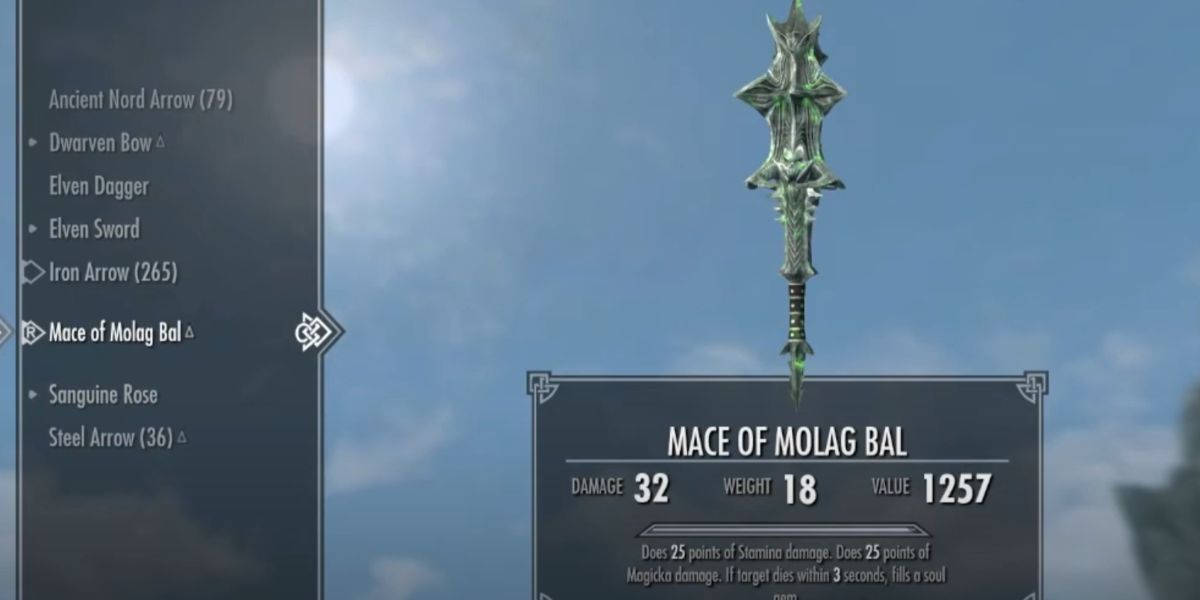 The mace of Molag Bal is a Daedric weapon that is acquired during the quest “The House Of Horrors”. This weapon is one of the only maces in Skyrim with a unique appearance that can’t be crafted, and it has a base damage of 16.

Although this mace has a weaker base damage than the dragonbone mace, it deals 25 points of magicka and stamina damage towards the enemy and fills a soul gem if the target dies within 3 seconds. These two effects make the mace of Molag Bal the strongest mace in Skyrim and one of the best-looking weapons in both Skyrim and its 3 expansions.