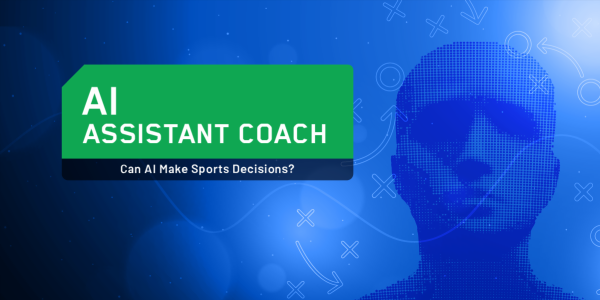 That motivational speech a coach or business executive gives you might one day soon be generated by an AI assistant alongside other bits of timely advice and insight.

SportsBettingDime, in collaboration with research lab OpenAI, has been experimenting with AI in the form of a GPT-3 text editor to emulate a coach that provides both play-calling advice and motivational speeches based on the situation a team is currently facing. GPT-3 is an AI language model developed by OpenAI that employs a Transformer model to create content in any voice, style, or tone by leveraging assets freely available on the internet.

The basic idea is to aggregate play calls made by other head coaches facing similar situations alongside all the best motivational speeches ever given by head coaches. The GPT-3 text editor then makes suggestions concerning what calls to make and is even capable of synthesizing speeches given by different head coaches to create a new speech.

OpenAI then asked “superfans” to rate both the play calls and the speeches given. The fans didn’t always think much of the play calls being suggested when the game was on the line. In an NBA game down 2 points with 10 seconds left on offense, AI would run a set play that specifically looked for a 2-point jump shot to tie the game. Many NBA superfans would deviate from that strategy, with 28.2% opting to run a set play for a 3-pointer to win the game. In an NFL game, following a touchdown with no time left and being down 1 point, AI would go for a 2-point conversion to win the game instead of a less risky extra point to tie. The AI play calls, however, may still represent the best chance to win the game. After all, fans don’t always make the right call themselves.

The motivational speeches received higher marks. Out of the five speeches fans were asked to rate, two of the three AI speeches created took the top two spots, with motivational ratings of 6.82 and 6.47. However, a third AI speech was also rated by far the lowest (6.07).

Both of the real coach speeches were identifiable by fans as given by an actual coach. The realness of AI speeches was a mixed bag, with one speech netting a 66.4% real-sounding rating; the other two were rated below 60% for realness. The main limitation identified by researchers is how real the AI-generated speeches can actually sound.

The study is part of an ongoing effort to determine to what degree AI might be capable of becoming a viable tool to enable other types of leaders to make more informed decisions, said Kristin Tynski, a project manager for SportsBettingDime. “You could apply it to business executives,” she said.

In theory at least, if an AI platform knows what strategies were employed by business leaders that faced a similar challenge, it could provide timely advice to the “head coach” of a business.

It may be a while before AI can deliver on that promise, but it’s worth noting that many of the challenges business leaders encounter today are not new. Other business executives have faced similar challenges that might be readily captured in published case studies in outlets such as the Harvard Business Review.

Humans can come up with any number of innovative approaches to overcoming a particular business challenge. However, people will waste a lot of time agonizing over small issues when a solution to the problem is readily at hand. One way or another, just about everybody will one day have their own personal digital assistant coach. The degree to which anyone will act on that advice naturally will vary based on both mood and previous experiences.