Aegis dances around King Louis XVI’s clockwork soldiers beautifully, striking devastating blows with such precision that their gears jam, rendering them immobile and open to a deadly finishing strike. I press the attack, quickly snapping to another tin soldier and starting an unrelenting flurry of slashes before Aegis overheats and I perfectly time her venting so that she barely misses a beat. I finish off the second opponent, and a third, until all that remains is scrap. When Steelrising works, it’s a gorgeous, rhythmic action-RPG that I could happily spend hours in. The problem is it barely works, and the combat is its only redeeming feature. It’s a broken clock, and it’s only time for combat twice a day.

Steelrising is set during the French Revolution, only there’s a load of mechanical monstrosities roaming the streets of Paris. This is the revolution that overthrew the monarchy, the one with Marie Antoinette and the let them eat cake line, not the June Rebellion in Les Misérables that everyone thinks is the French Revolution. The French revolted a lot, so it's okay to be confused. I was also confused during the game. Not because of the setting, I was confused as to what my actual mission was.

Aegis is one of the King’s legion of clockwork soldiers, only she’s different. She can speak, has some semblance of free will, and works for the Queen. It’s a weird feeling playing the barely sentient slave to a monarch, the very height of symbolic inequality, and the game does little to interrogate this despite its monarchy-overthrowing setting. I spent all of two minutes with her maj and one of her servants before she sent me off to stop the King and find out what happened to her son. Why are she and the King not on the same side? I haven’t the foggiest. 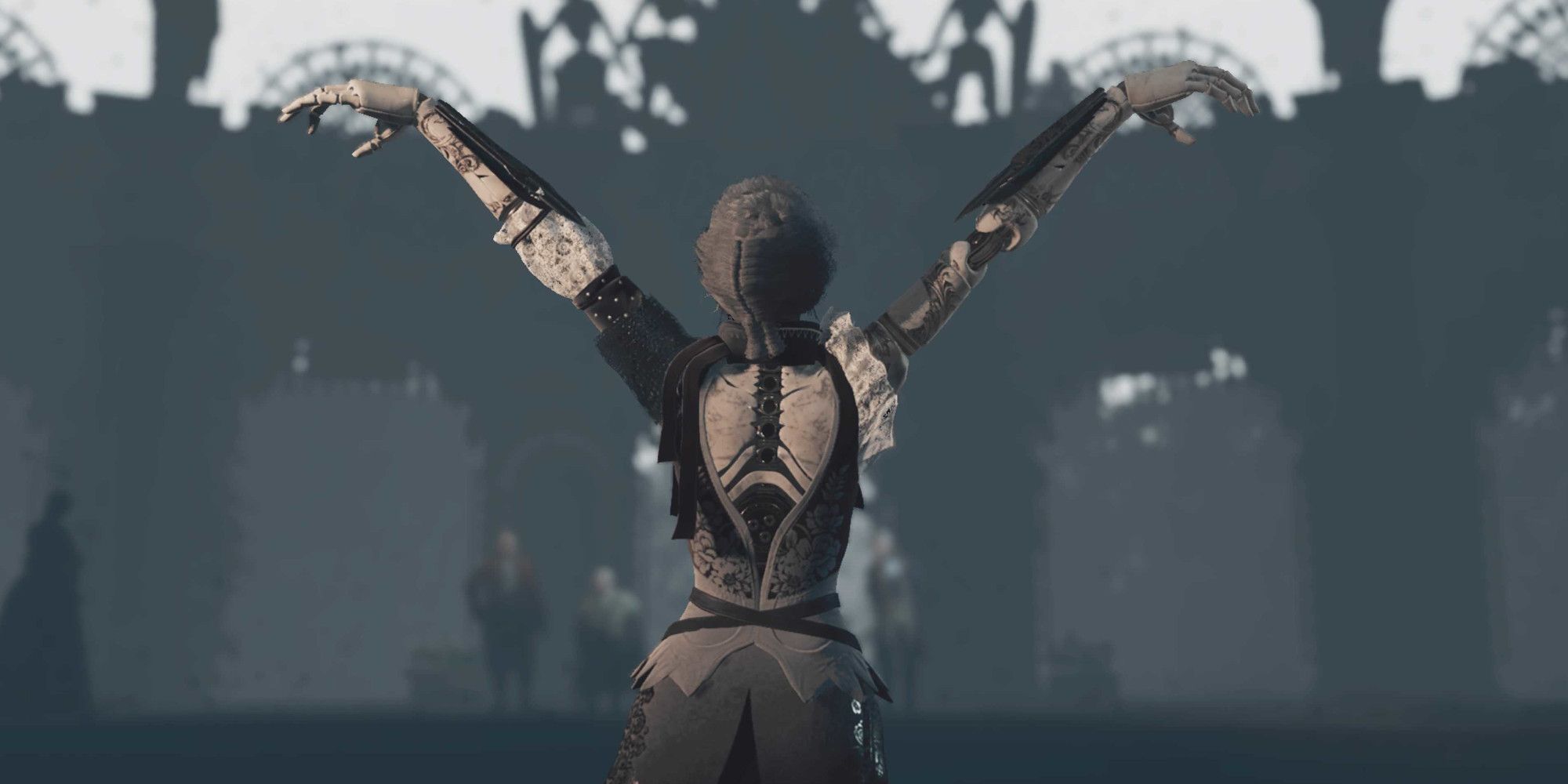 That typifies my thoughts during all of the game’s cutscenes and side quests. I didn’t know what I was doing there, and I honestly didn’t care. The script is not Steelrising’s strong point. Nor are the cutscenes for that matter. Frequent audiovisual bugs saw Aegis vibrating on the spot and many lines of dialogue cut in half, with only the latter half spoken. This was an issue when passing NPCs trapped in buildings, speaking to each other in real-time as well as during the pre-rendered moments.

Normally bugs like this wouldn’t bother me, but the game as a whole was filled with so many little annoyances that they weighed down my time playing. I got stuck for hours when a compass marker wouldn’t update and the level itself offered no way of knowing where I was meant to be headed. That happened twice, during two separate missions. There was also a lot of texture pop, weirdly small text on notes – despite my bumping the subtitle size to maximum, it doesn’t change any other text – and item names not showing up for ages once I’d picked them up. I also frequently got stuck on the terrain if I missed a jump and would have to quit the game to reset Aegis. 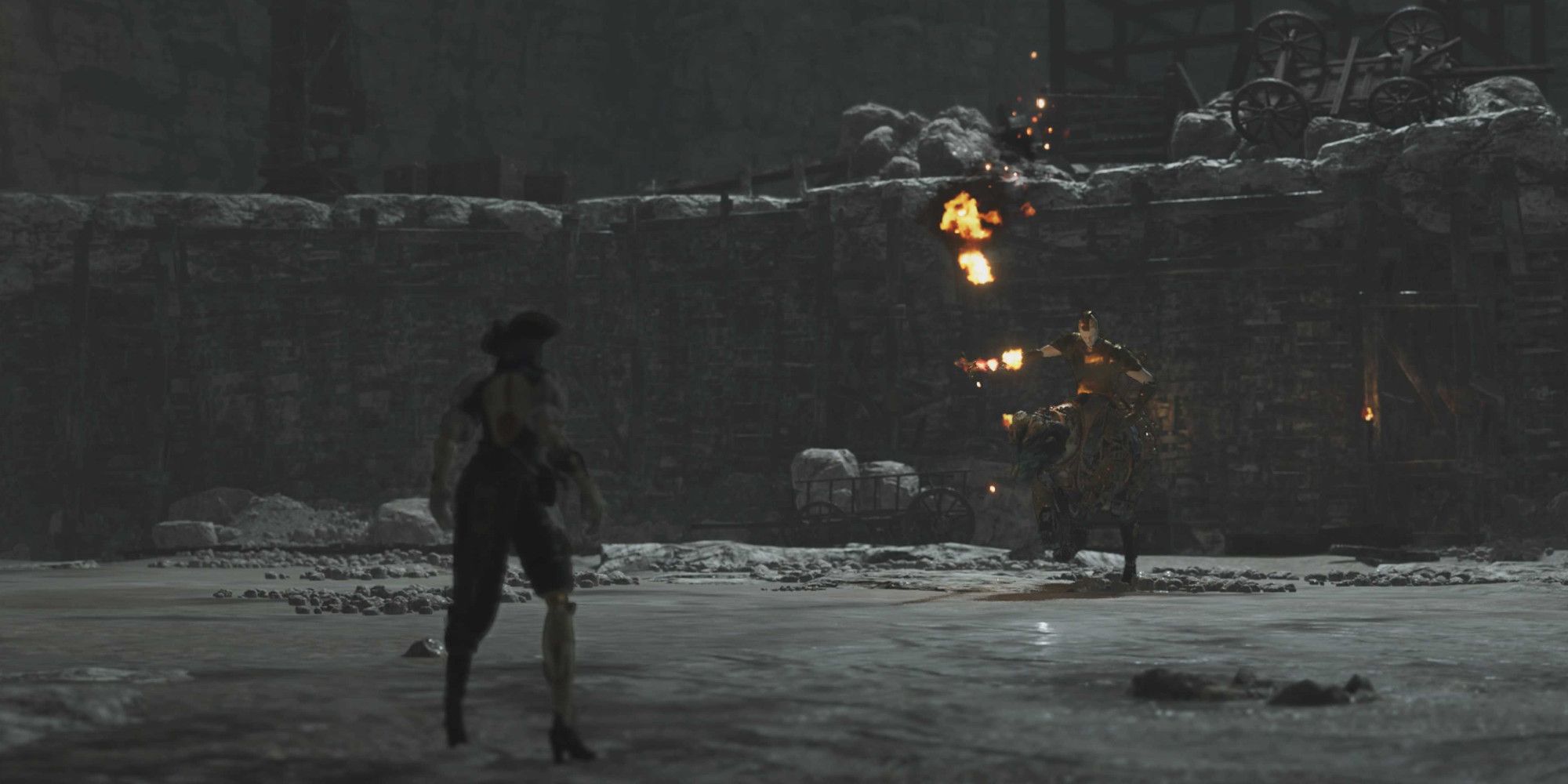 As I said, combat is the game’s only redeeming feature, and it is excellent. Blocking, counter-attacking, and critical hits all ring out with the satisfying clash of steel on steel, and the game looks at its best during a skirmish. The weapons are horribly balanced, but this is a single-player experience so who cares if there’s a set of steel fans that fire out knives that kill anything at a distance? It’s fun, they’re cool, and there’s a wide variety of weapons that fit any playstyle, so you can use something else if you don’t want to feel overpowered. I opted for the falchion and sabre, dual-wield swords that spring out of Aegis’ arms in a display that’s as elegant as it is lethal. This weapon works best with a Bloodborne-style approach to combat, always on the attack and sidestepping incoming blows to get a few more hits in before repeating the process.

The cooling system used to regain stamina is Steelrising’s only successful iteration of the standard soulslike formula, and it’s brilliant. Once your stamina depletes, wait for a second, and then you initiate a system flush that cools Aegis’ gears. Hit it too quickly and you have to wait longer to try again, hit it too late and you don’t get much stamina back. Always, you inflict some freeze damage on yourself and risk becoming stuck in place, especially if you’re fighting enemies that already have elemental attacks. It keeps combat tense and ensures it’s a dance with frequent momentum changes rather than a one-sided slug-fest. It’s a mechanic I quickly fell in love with as it adds an element of skill to your stamina management beyond just putting on the right gear and assigning points to the right stats. 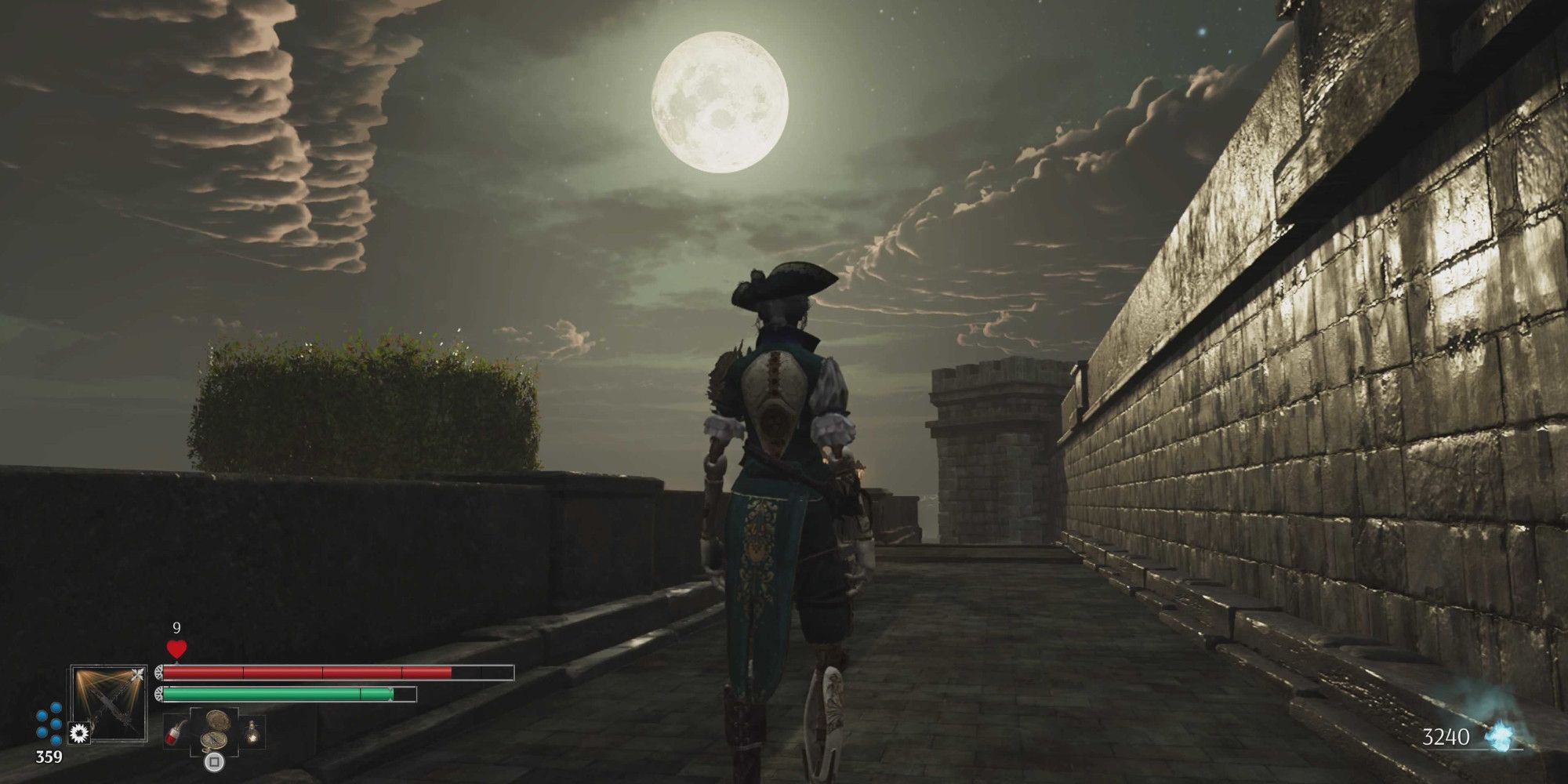 That’s the only unique thing about this game. Old-school-mechanical-Bloodborne-like isn’t even a one-off any more, with Lies of P around the corner. The 18th-century Parisian setting has been done before, and done better by Assassin’s Creed Unity. I know it’s not fair to compare Ubisoft’s triple-A offering with Spiders’ double-A ability, but that’s the competition, and life isn’t always fair. This is a stripped-down, semi-open world variation on the formula and it still doesn’t stick the landing.

There’s no intrigue to Paris like there is to Yharnam. Even with the clockwork clutter strewn across the streets, it’s still just Paris, only soulless. Most people would think taking the people out of Paris would improve the city, but it just makes it dull. The characters I met during the course of the game didn’t help breathe any life into it either. They’re all middle-aged white men in wigs who I could barely tell apart. Except for the singular Black character who is on a mission to liberate the slaves in France and her colonies. It’s a subplot that’s handled in a bizarre, tactless way and feels truly tokenising. 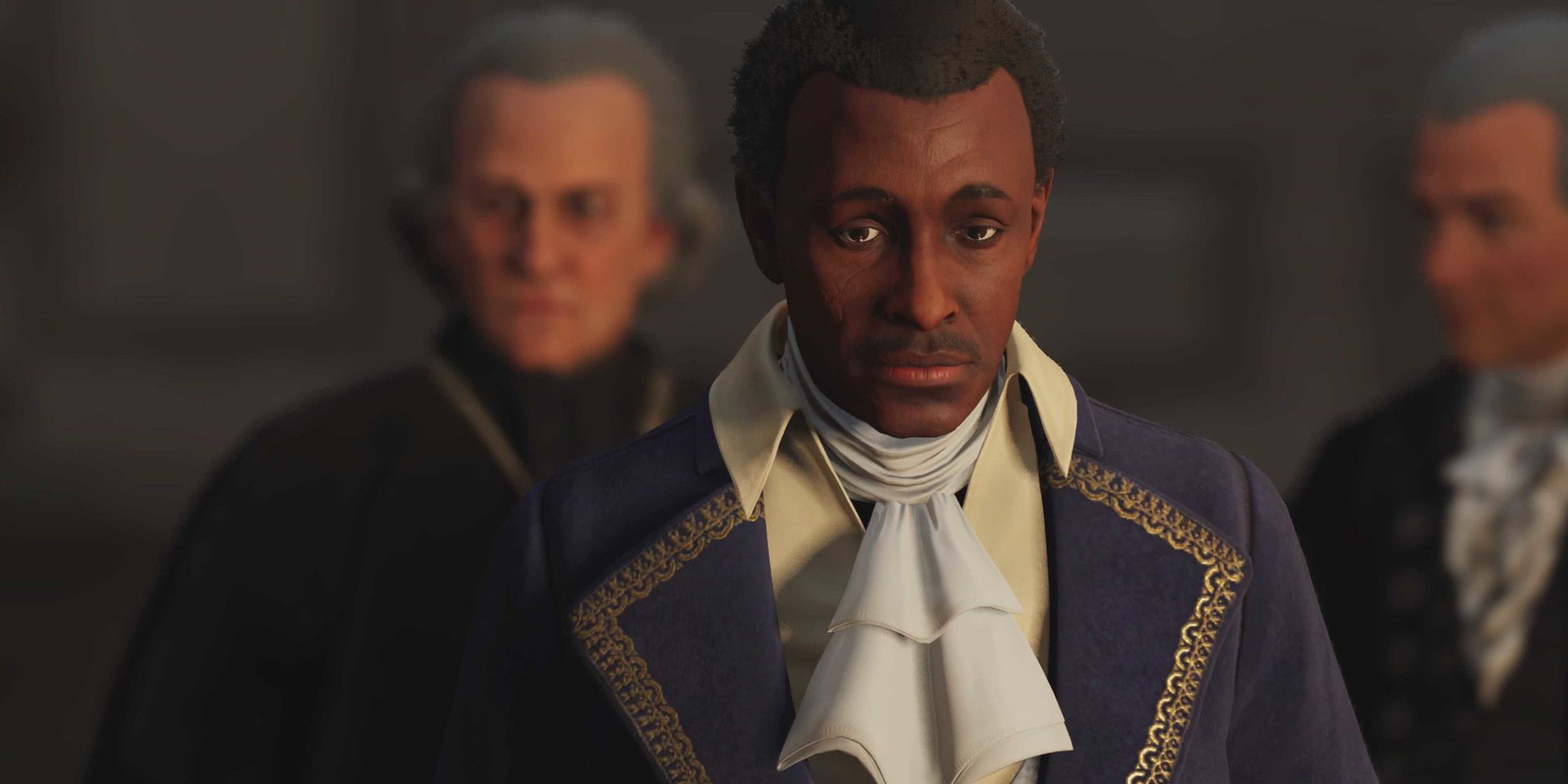 What doesn’t help is the amount of time I’d have had to spend with these people if I wanted to do all of Steelrising’s side quests. Remember my mission to find the Queen’s son? I put a real shift into it but it just goes on for far too long. There are a dozen or so sidequests that all feel never-ending.

It’s how I feel about every aspect of the game. Levels aren’t so much interconnected mazes as they are arduous gauntlets, at least for the first half of the playtime. Once I gathered all the traversal tools, levels opened up a lot more, but that was after a dozen or so hours of play. Before that, you could go forwards or back, meaning each level felt like a marathon circuit to be raced through rather than a labyrinth to be explored. 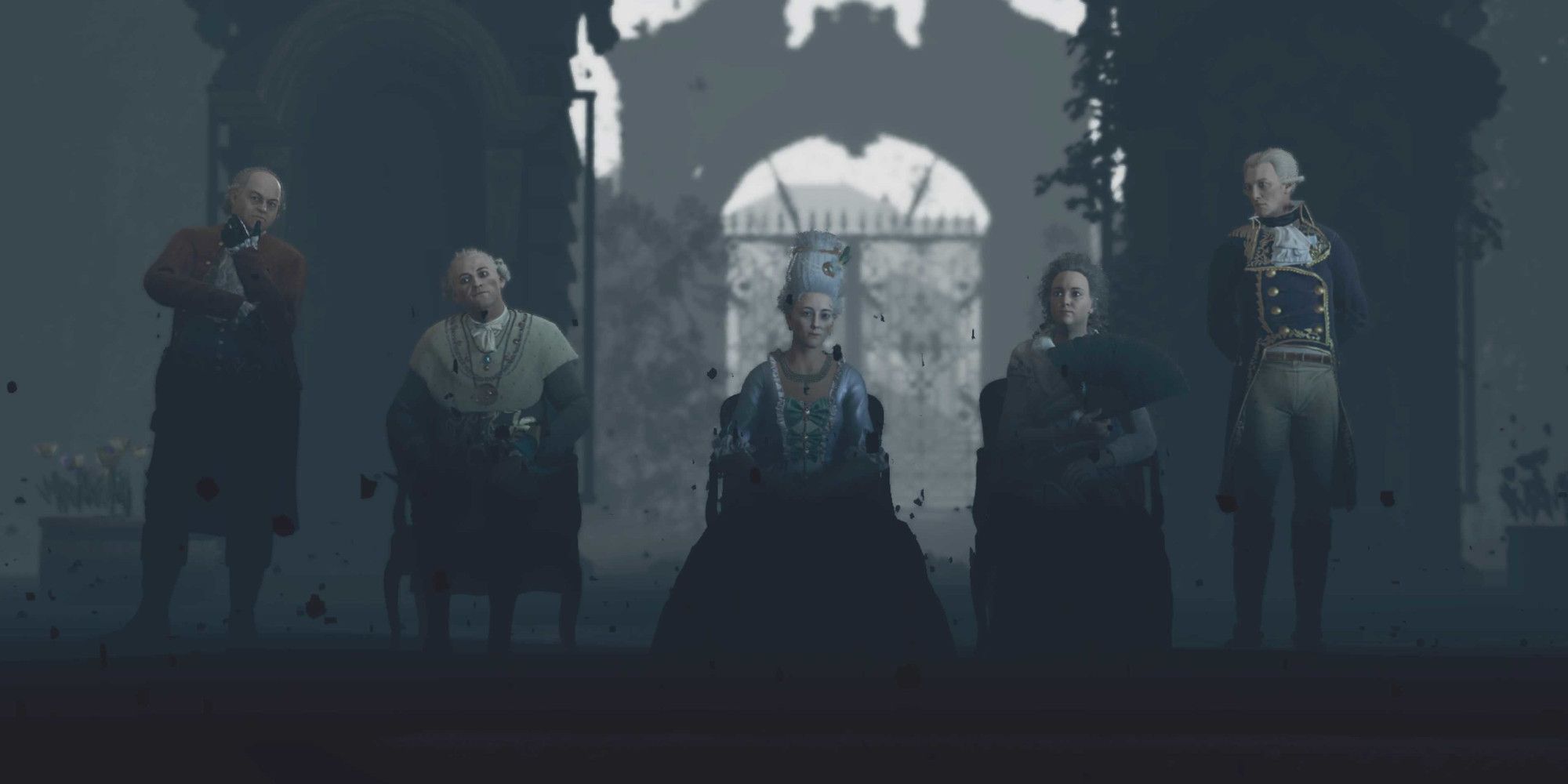 Finally, the boss fights. The first mini-boss helped me to truly get the combat. It was a beautiful sharing of hits, blocks, counters, and staggers. No boss took me more than two attempts, but I never had to grind, so I can’t have been overleveled, and I’m not exactly a pro gamer, so I don’t know why everything was so easy. The boss designs are cool, but they can all be beaten the same way. I didn’t have to switch up my weapons or playstyle and could just wail on them till they fell. Hardly the mechanical titans the plot holds them up to be. The fights do look cool, I’ll give them that, but they’re all style and no substance.

I want to like Steelrising, I really do, but it just won’t let me. Every aspect of the game feels like a barrier to the one thing I enjoyed: combat. Even that got boring. The characters are bland, the story is dull, the setting is derivative, and the finished product is too buggy and bloated to truly enjoy. It needed a few more turns of the key to go the distance and keep on ticking smoothly.

A review copy of Steelrising was provided by the publisher.