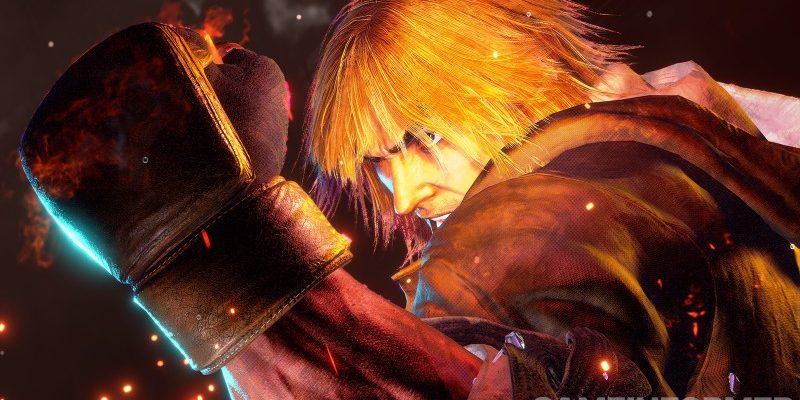 As you saw with our cover reveal yesterday, one of the most iconic characters is a centerpiece of Street Fighter 6’s story. Ken Masters, one of the two original playable Street Fighter characters, steps back into the spotlight with an all-new backstory. As soon as his new look was unveiled, the Street Fighter community had a field day pondering what happened to put Ken in the rough state he appeared, with memes popping up deeming him “Hobo Ken.” While at Capcom’s headquarters in Osaka, Japan, we spoke with Street Fighter 6 director Takayuki Nakayama and art director Kaname Fujioka to get more details about what is going on in Ken’s life around the time of Street Fighter 6.

Returning World Warriors like Ryu, Chun-Li, Dhalsim, and Blanka all sport new looks, but Ken is perhaps the biggest departure from his classic appearance. Longtime Street Fighter fans have seen his evolution from Ryu’s rival to husband of Eliza, father of Mel, and ex-vice president of the Masters Foundation. Street Fighter 6 introduces the character to a new era with new motivations.

“Throughout the series, it seems like his life has become more and more stable, and the team felt like he was losing a reason to fight,” Nakayama says. “But this is a way to create that reason for him to step up. We want to create that kind of plotline that explains why Ken is important and gives him that purpose. The story will be tied to those other characters close to him.”

Typically sporting a red gi and a clean-shaven face, Ken now rocks a jacket, boots, new red pants, and in some depictions, a little stubble. Capcom’s main goal, aside from depicting an iconic character in a different phase of his life, was to bring back the passionate nature that set Ken apart from Ryu in the franchise’s early days.

“The title that left me with the biggest impression was the Street Fighter II series and how I see Ken in the Street Fighter II series is, in comparison to Ryu, who is more stern and serious, I see Ken as a fiery and explosive character,” Fujioka says. “Throughout the evolution of the series, there’s been different kinds of Kens as well. In the Alpha series, he was a little more playful and lighthearted in a way. For 6, we wanted to bring that fiery explosiveness back into it. In comparison, Luke in Street Fighter 6 might be more cheery and a kind of playful character. We wanted to differentiate from that, so we wanted to go with this more fiery type of personality. And there being the story behind Ken and there being a more serious tone to him, we wanted to express that through the character designs as well.”

Despite the various hints dropped during my time at Capcom, the studio remains tight-lipped on the specific narrative reasons Ken is in this perilous state. “For players who start up Street Fighter 6, they can expect that Ken is now on the run from something, and he is not able to see his son Mel for reasons unknown,” Nakayama says. “He’s in a tough situation that you’ll learn more about in the future.”

The curtain will be pulled back on Ken’s backstory through a special four-issue comic series from longtime Capcom collaborator UDON Entertainment. The storyline will give us plenty of insight into what’s going on with Ken while setting the stage for Street Fighter 6’s story. Luke will also feature prominently in this series of comics, as will Ken’s son, Mel.

“This is the first time that we’re doing this kind of comic book series that’s closely tied to the story of the main game,” Nakayama says. “We’re working very closely with our partners at UDON. We’re providing the script and the storyline of what to expect before the events of Street Fighter 6. They’re going to be helping us to create the storylines. Beyond that, they’re even working into possible spin-offs as well, and collaborating with the scriptwriters on the team, so there may be more stuff beyond just the initial comic book series.”

Piecing together clues, it seems as though Ken is on the run in relation to a terrorist bombing. In a synopsis of the UDON comic series, I learn that Ken has lost both his status and reputation and is sent on the run for a crime he didn’t commit. In the above still from the intro to Ken’s Arcade story, the authorities have seemingly apprehended him for interrogation, with questions being raised about “the champ.” Ken apparently gets away from the hairy situation depicted in the first shot above and enters a transient lifestyle to keep a low profile and remain off the radars of the police. That leads to the extraordinary circumstances under which he’s living during the time of Street Fighter 6.

We won’t know for sure what’s going on with Ken until this comic prequel series and Street Fighter 6 arrive, but for now, color me intrigued. As a Ken main, I love seeing him put into different situations, even as stressful as this one appears to be. In the walkout animation for Ken, it seems as though he is extra emotional in this title. Fujioka tells me he wants to bring back Ken’s fiery personality, and based on my time with the game, it appears they’ve accomplished that mission. I’m excited to see what else the story has in store when Street Fighter 6 launches in 2023.