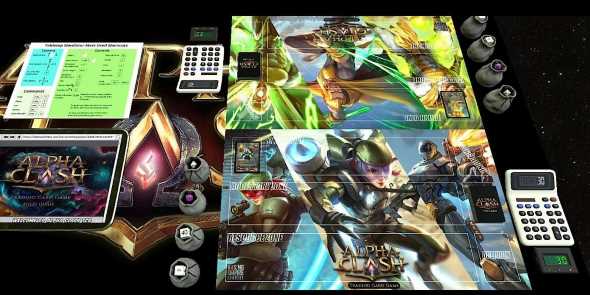 Just three days before the Alpha Clash TCG kickstarter ends, the creators have revealed a surprise mod for it on Tabletop Simulator. You'll now be able to try out the superhero based card game on Steam before you decide to invest in the actual game.

''Our game features world-class artwork, amazing gameplay, and is steeped in rich lore and backstory," says the Kickstarter page for the TCG project. "This game is the superhero-themed TCG the industry has been waiting for! This game was developed by a team of expert trading card game players AND has been tested extensively by a large group of highly competitive card players and judges from many popular games."

As it stands the Kickstarter for Alpha Clash is at $ 404,684, with the initial target being only $99,999. It's safe to say that with the game garnering over four times its original goal, a lot of people are looking forward to getting their hands on the super hero based TCG. Additionally, the team also released images of the entire debut set and two print-and-play decks on Discord.

The creators seem pretty confident about the turnaround time from the Kickstarter to the initial rollout. "We have already completed a sample print run of the first set and have everything buttoned up as we head into the post-campaign production process. You can have confidence in this campaign as we anticipate faster-than-average turnaround times." Along with that, they shared a short clip of a machine printing and cutting cards at a fairly quick pace.

With such a high Kickstarter funding attained, there's no doubt that TCG fans love what they see, and can't wait to get their hands on Alpha Clash. It seems something similar – albeit criminal – happened with Pokemon cards in Tokyo. A group of thieves broke into a Tokyo based store and made off with over $11,000 worth of Pokemon cards. One of the main reasons they were targeted is the ridiculous real-world value applied to these cards, sometimes ranging in the millions.

It seems like it was a well planned heist too, as the police reported that the thieves scaled the building to a glass door on the second floor, used a blowtorch to enter, and quickly took the cards before anyone noticed.