As part of their early Black Friday deals this year, Target is offering a buy two get one free event with select video games. These deals include many new releases and range across platforms. They will likely be available for the coming weeks in the leadup to Christmas.

The chain has had some decent sales (decent enough to incur a bit of violence), with this particular deal running every November in the lead up to Christmas. Their console bundles last year, which started at just $199.99 for an Xbox One S bundled with Star Wars: Jedi Fallen Order, were listed as some of the best deals of the day by Forbes, and are looking to come back this year, although they’ll probably be announced closer to the day and be available for a shorter period of time.

This Buy 2 Get 1 sale, according to their weekly ad, includes such popular new releases as Watch Dogs Legion, Cyberpunk 2077, Assassin’s Creed Valhalla, and Mortal Kombat 11 Ultimate, along with recent releases like Just Dance 2021 and Minecraft Dungeons. The games included range across platforms from Xbox, PlayStation 4 and PlayStation 5, and the Nintendo Switch. 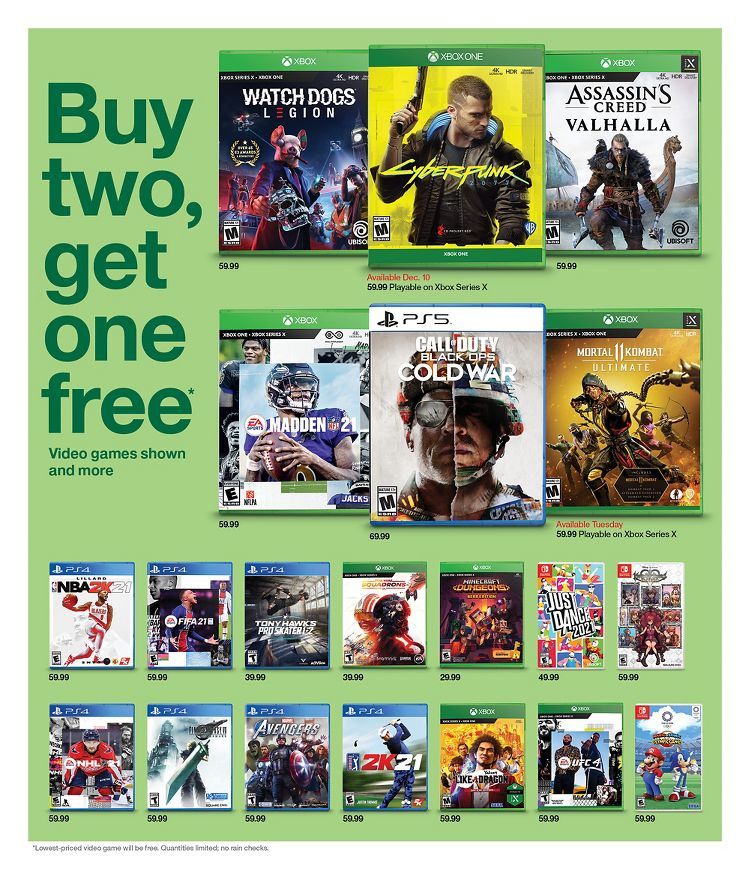 There are also excellent deals on electronics like televisions and Apple Watches, and accessories like mice and headphones, featuring savings upwards of $50 a product. New sales are being announced every day, including discounted or free shipping and curbside pickups for some stores.

Related: The D&D Core Rulebook Set Is 25% Off In The UK For Black Friday

Most stores are hosting their Black Friday deals early in light of the pandemic to allow for easier online shopping and limited in-store presences for the safety of their customers and employees. This does open them up to the serious risk of scalpers (people who buy large quantities of things immediately upon their release or the announcement of the deal to resell at a higher price). Considering they have very little alternative right now, however, it seems like a decent victory for everyone involved.

The deal runs all this week, from November 15 to November 21, with the potential to go on through the end of November. It’s probably best to get your orders in early, though; supplies are limited, and especially this year, will probably run out before the end of the sale.