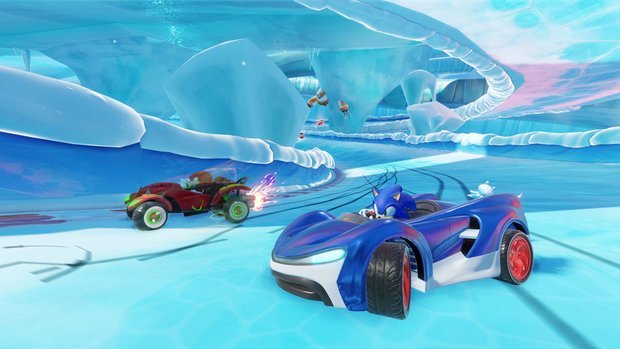 To add another chaotic element into the mix, you can activate Ultimates once you’ve skidded, boosted and raced enough to fill a gauge attached to your player icon.

These quick boosts are basically the karting version of popping an Invincibility TV in the classic Sonic games: they make you (relatively) hard to slow down, ping enemy racers you bypass away from you and give you about five seconds of boost to boot.

If you and your team are in sync, you can activate a Team Ultimate that brushes past other racers, lasts longer and makes you even quicker. Timing this right – and using it to offset enemy projectiles, interrupt enemy speed boosts and mess up enemy team setups – adds another level of lite strategy to a game already steeped in low-key chaos.

You’d think it would make the game top-heavy, unfun or irritating – but it actually has the opposite effect. Because you can get back up to top speed as quickly as you can be shunted out of it, Team Sonic Racing actually becomes a rapid, rewarding experience once you learn how to make the most of the three Classes of racer you’re going to be selecting. 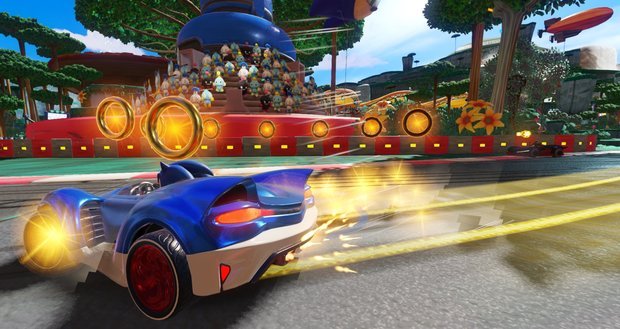 The game has 15 characters split into three classes: Speed, Technique and Power. Speed Class racers – perhaps unsurprisingly – have the best top speed. This means that players that want to focus more on drifting and want to be more defensive when it comes to maintaining speed are going to have the best time here.

Technique Class racers handle better and accelerate faster, though typically have a lower top speed. Players in this Class can cut corners, go over rough terrain, and receive minimal penalties for it. Between more freedom in choosing routes and better handling, this Class can nip Speed players in the bud without too much effort. Good all-rounders, for sure.

Finally, there are Power Class characters. These tanky karters are more resistant to collisions from other players, and though their acceleration leaves a lot to be desired, these characters can smash through different obstructions in the road without being slowed down too much. They can also open up new routes via breaking obstacles other racers can’t – offsetting lower speed with creative shortcut placement.

If all three players in a team use these different classes – and slingshot each other, recover each other and utilise each other’s strengths in order to outweigh the classes’ weaknesses – they can create really interesting and dynamic matchups against other teams. It means Team Sonic Racing is one of those games that’s easy to learn, difficult to master, and fun at any skill level.

Team Sonic Racing may not dethrone the king – Mario Kart sees pretty immortal from where we’re sitting – but it does a great job of revitalising the genre and providing something different in the kart game space.

If you’re the kind of player that loves Sonic and friends, and delights in zipping around creative, inventive tracks, listening to amazing music and teaming up with unlikely allies to batter Big the Cat into the ground (where it belongs), Team Sonic Racing is for you.

We haven’t even touched on the robust customisation suite in this write-up, and we haven’t mentioned the camp fun of Story mode. All of that is dressing to the core game though: a delightful, fun kart racer that has all the makings of a classic.

Sonic fans and casual racing fans, eat your heart out: this game is well worth the price of entry.