There are loads of different bosses in Terraria. These resilient and sometimes totally bizarre creatures are the main driving force of progression in Terraria. Everything you do in the game is basically prepping yourself for the next boss fight.

From the very early days of battling Green slimes with a copper shortsword to finally defeating the Moon Lord and crowning yourself a ruler of Terraria, the adventure through Terraria’s many bosses can seem confusing for brand new players. Here’s everything you need to know about boss progression in Terraria 1.4. You should aim to defeat the bosses in the order presented in this guide. 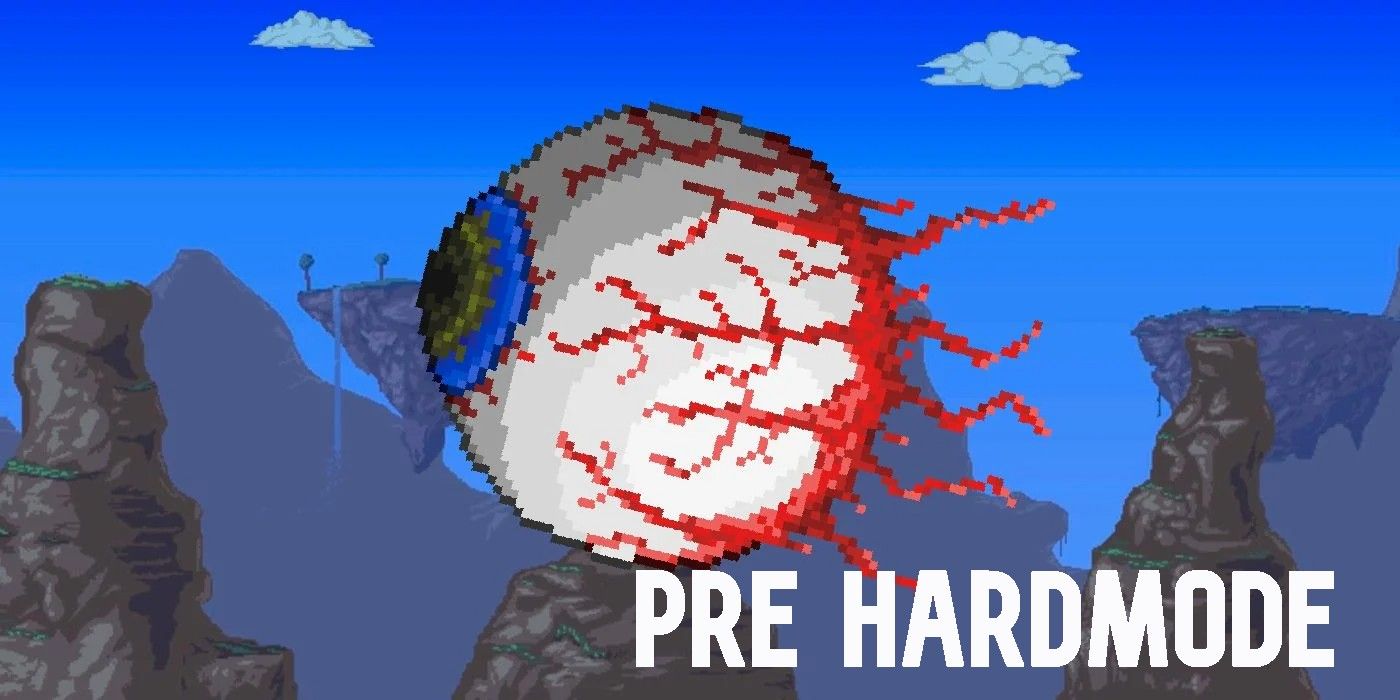 There are seven pre-Hardmode bosses in Terraria. Defeating them is crucial to progressing through the game with the intention of eventually entering Hardmode. Here’s a look at each boss in Terraria and which one you should defeat first.

The Eye of Cthulhu – Your First Boss Fight

This floating angry eyeball is likely the very first boss you encounter in Terraria 1.4. This is because the Eye has a chance to spawn once every three days when the player has over 200hp, which most players should hit pretty quickly if they’re hunting for life crystals underground. You also need at least 3 NPCs and over 10 Defense for the Eye to spawn.

If you want to summon the boss and get the fight done very early (which can be a valuable strategy if you want to rush through the early game) the Eye of Cthulhu can be spawned with a Suspicious Looking Eye. This boss-summoning item can be found in chests, although it can also be crafted with Lens at a Demon or Crimson Altar.

Tips for the Cthulhu boss fight:

King Slime, A Boss To Defeat Whenever You Get A Chance To

The King Slime is not crucial to your progression through the game, although you should take any opportunity you have to fight this giant Slime. It spawns during the Slime Rain event. Defeat 150 slimes and the King Slime will plop down beside you. The boss received a bit of a buff in Terraria 1.4 — it now teleports to you — and is worth taking down for some of the rare items it drops.

You might be able to get your hands on:

Next Up, The Eater Of Worlds Or Brain Of Cthulhu

The Eater of Worlds

Players on a Corruption biome should beeline straight for the Eater of Worlds boss fight. This colossal worm is quite easy to beat and it drops a huge amount of Demonite Ore and the crucial Shadow Scales, which you need to craft the majority of Corruption armor and tools. 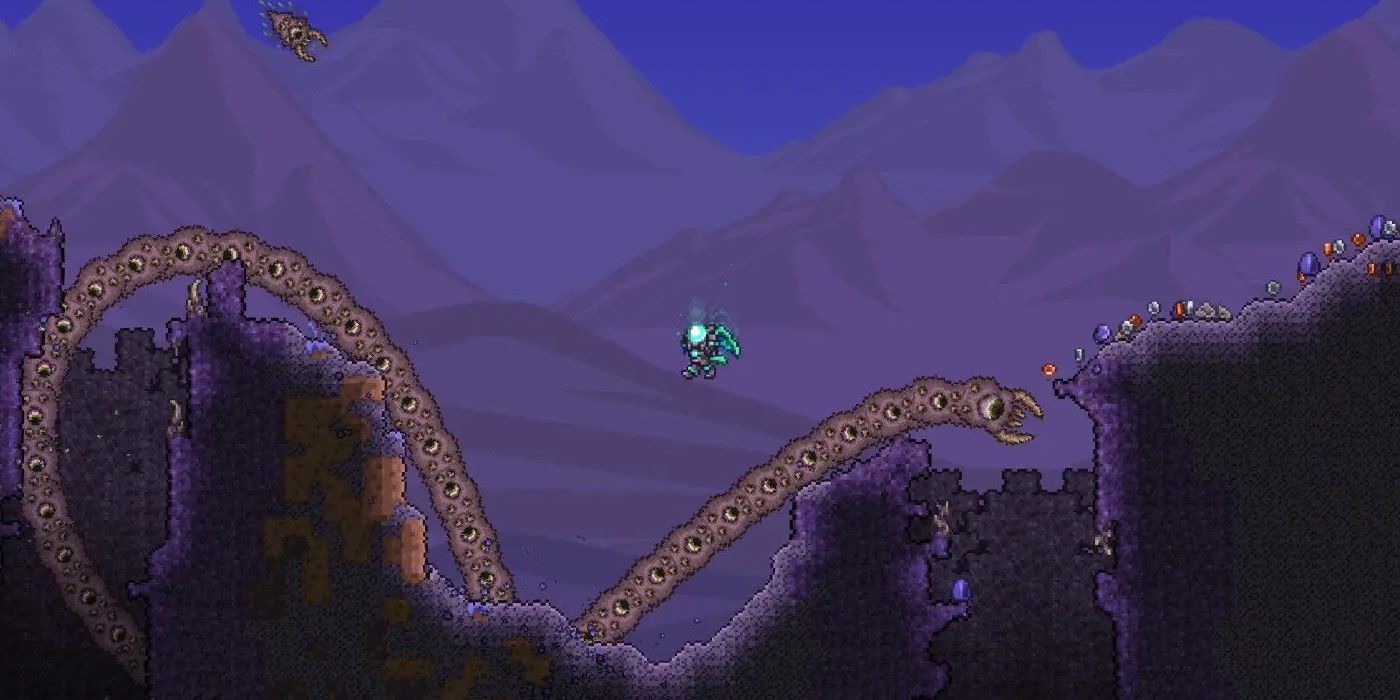 The Eater of Worlds is spawned by destroying Shadow Orbs. These are sources of decent gear, so it’s worth destroying a few regardless if you are ready for the fight or not. If you don’t want to fight the big worm, don’t destroy the third Shadow Orb. You can get cool items like the Undertaker ranged weapon (good for an early game Ranged build in 1.4) and a light pet.

The Brain of Cthulhu is basically the Crimson’s version of the Eater of Worlds, and it can only be spawned in a Crimson biome. It’s spawned primarily by destroying Crimson Hearts, which drop similar loot to the Shadow Orbs over in the Corruption biome.

The Brain is definitely a harder fight than the Eater of Worlds. Because you’ll likely spawn the Brain inside a Crimson cave, you want to light up the area and cover it in platforms before you destroy the last heart. Enemies will continually spawn in the area, even when you’ve got torches down.

Skeletron – Getting Ready To Venture Into The Dungeon

There’s a good debate for which boss to tackle next in Terraria after the Eye of Cthulhu and your Evil biome’s boss. You could head right to the Jungle biome and defeat the Queen Bee, but honestly, the Jungle can be even more deadly than the Dungeon. It’s a good idea to take down Skeletron first, loot up with some useful gear in the Dungeon, then head into the Jungle. 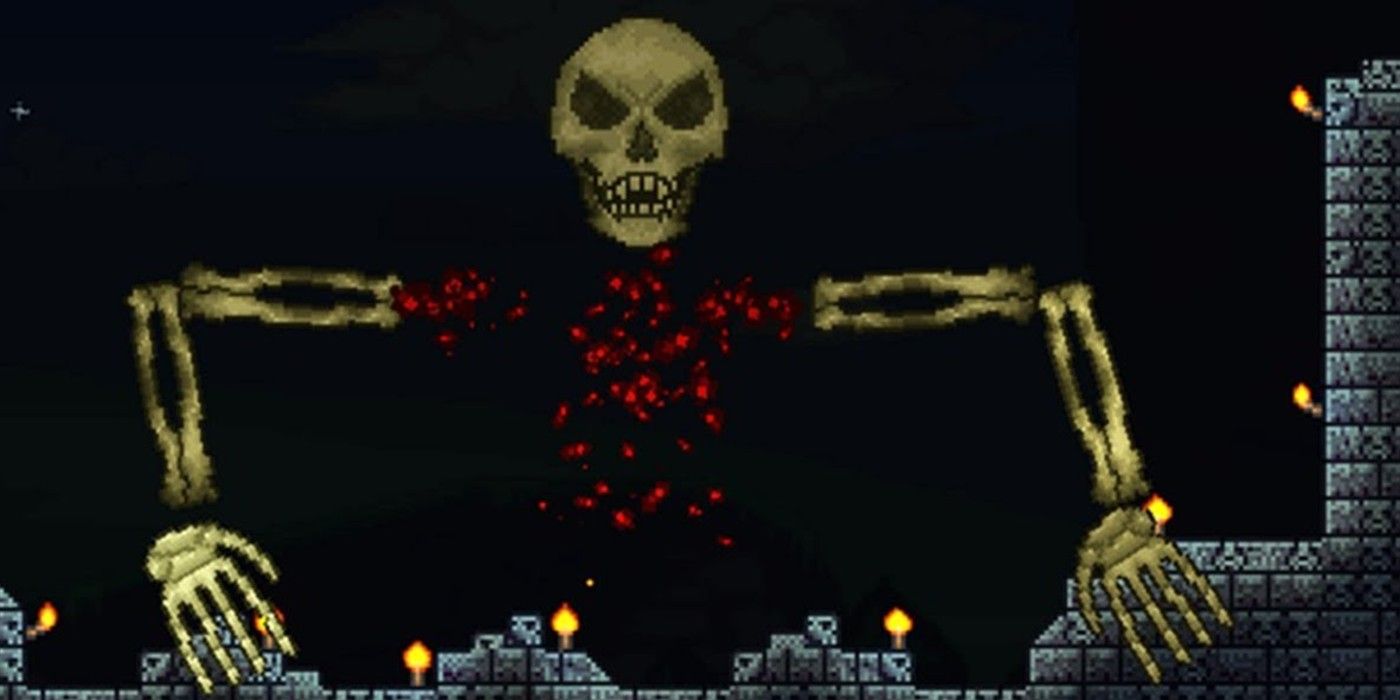 Skeletron is spawned by talking to the Old Man at the entrance to your world’s Dungeon. This will spawn on either the left side or right side of the map, quite close to the Ocean biome. This floating skeleton boss might look terrifying, but with the correct boss fighting arena set up, it’s not that difficult if you’re geared with Corruption or Crimson armor and a ranged weapon (or magic, if you’re going for a mage build in 1.4) of some sort.

The Queen Bee is the next best step after conquering the Dungeon. This boss is located in the Jungle, although her Hive can be quite tricky to find. There can be more than one Hive in a Jungle biome, but that doesn’t make them any easier to find in the swarms of Hornets and angry plants.

Once you locate the Hive you should set up a rudimentary boss arena inside with platforms and torches. To spawn the Bee, destroy the block at the center of the Hive. This boss is worth fighting a few times if you can get the materials to create several summoning items (you need Honey Blocks, Stingers, Hives, and Bottle Honey to craft the Abeemination, the item that spawns the Queen Bee).

Wall of Flesh, Ready For Hardmode

The Wall of Flesh is the final boss in pre-Hardmode Terraria. This horrifying tower of Flesh spans the entire screen when you’re in the Underworld biome. Defeating it will make your world progress into Hardmode, with trickier enemies, biomes, and the ever-expanding Hallowed biome. 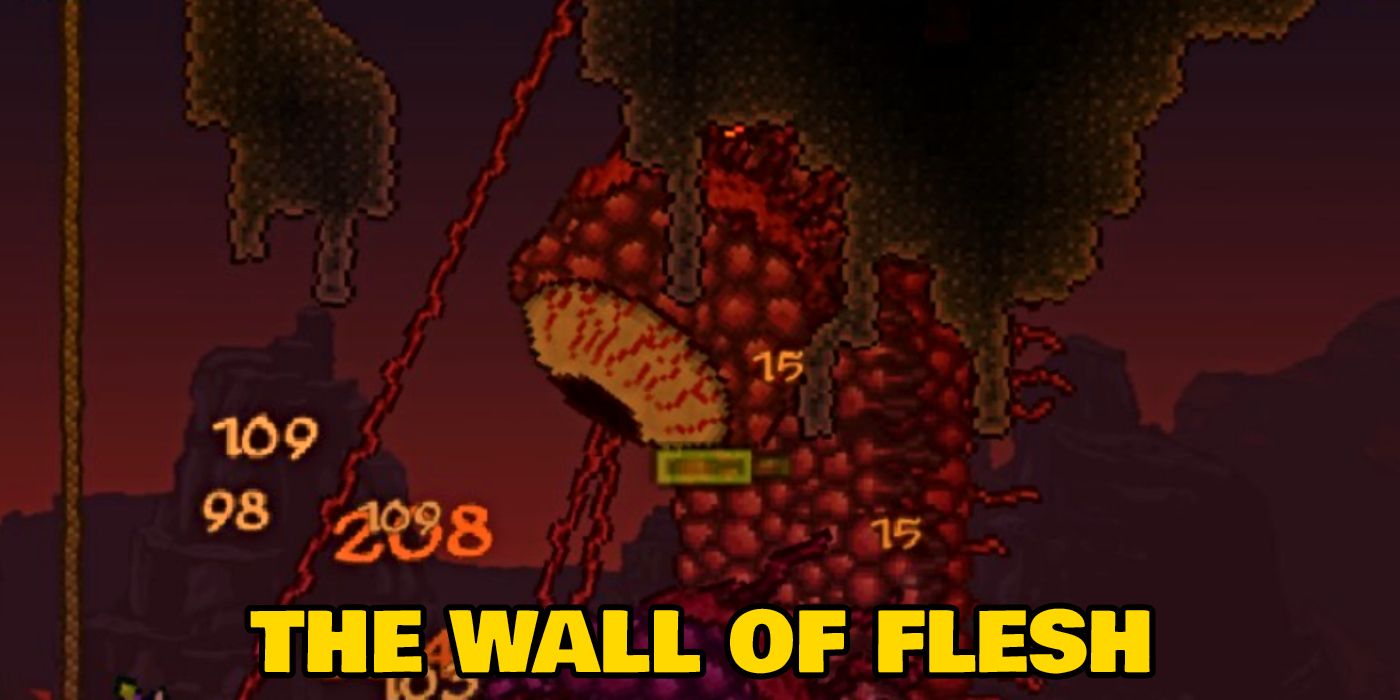 If you’ve already defeated the Queen Bee, this boss fight shouldn’t be too difficult. Those Beenades absolutely shred through the Wall of Flesh’s many eyes and spawned Leeches that chase the player. All you need to do is create a very long platform that spans a few hundred blocks and throw grenades. Here’s our detailed guide on how to defeat the Wall of Flesh. 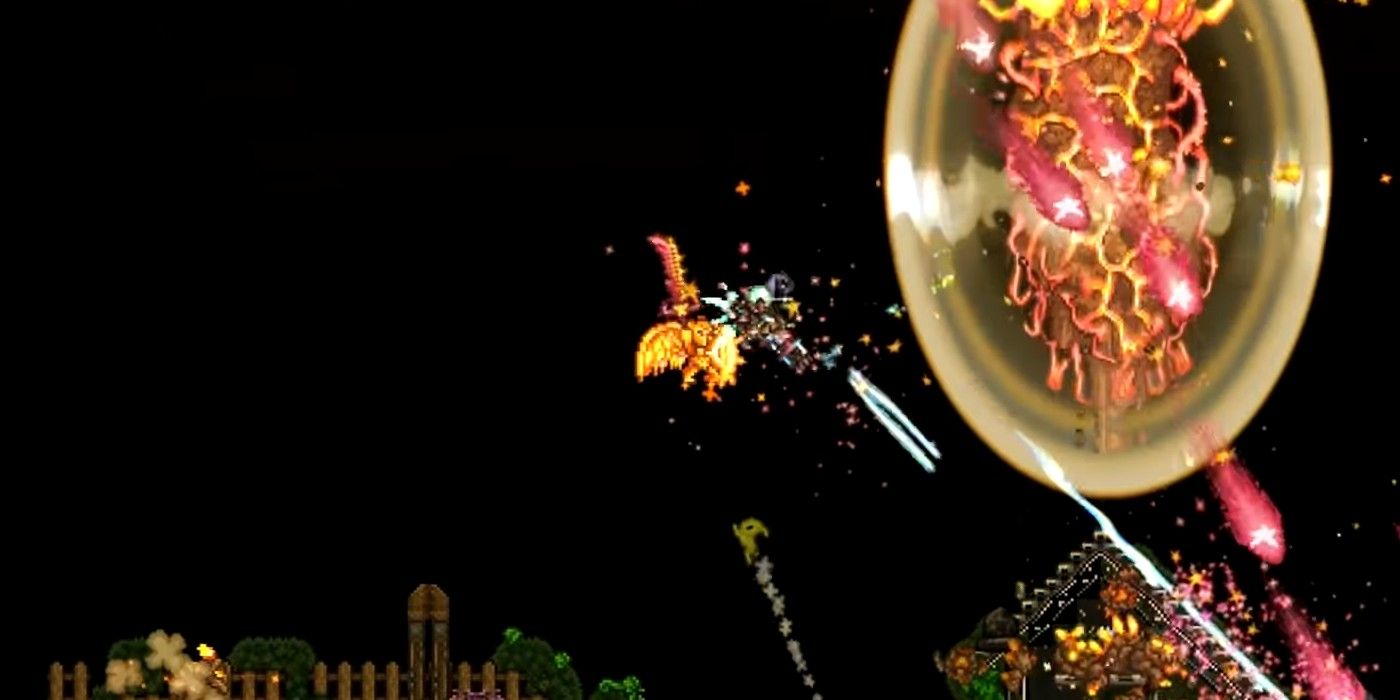 Once you’ve defeated the Wall of Flesh, you head into Hardmode. Everything gets a lot trickier here, including the boss fights. Before you even consider taking down any of the Mechanical Bosses (more on that in a moment) you should begin by gathering loot and sourcing new powerful items. You could head to the Hallowed biome to look for Mimics, buy the Leaf Wings from the Witch Doctor in the Jungle, or begin smashing Altars to spawn Hardmode ores.

When you feel ready and strong enough to start taking down Hardmode bosses, here’s the order you should approach them in.

Queen Slime, Not A Bad Place To Start

Added in Terraria 1.4, the Queen Slime is an optional boss fight in terms of progression, but quite a good idea to fight right at the start of your Hardmode adventure. The Queen Slime is spawned by breaking Gelatin Crystals that might be found on Pearlstone or Pink Ice Blocks in the Underground Hallow biome.

The Queen Slime is worth defeating early on because she can drop useful items, like the Hardmode weapon Blade Staff, the Gelatinous Pillion Mount item (that spawns a winged mount, rather than the regular Slime Mount), and the Hook of Dissonance, one of the first Hardmode hooks you can get your hands on. Check out our list of the best hooks in Terraria 1.4 here.

The Twins and The Destroyer

Much like The Eye of Cthulhu from pre-Hardmode, The Twins are Hardmode’s answer to the big angry eyeball. These double-eyes will be the first Mechanical boss you fight in Hardmode, and they’re essential to defeat if you want to progress any further into the game. You should approach the boss fight in a similar way to every other fight: gear up, and summon the boss at your boss-fighting arena. 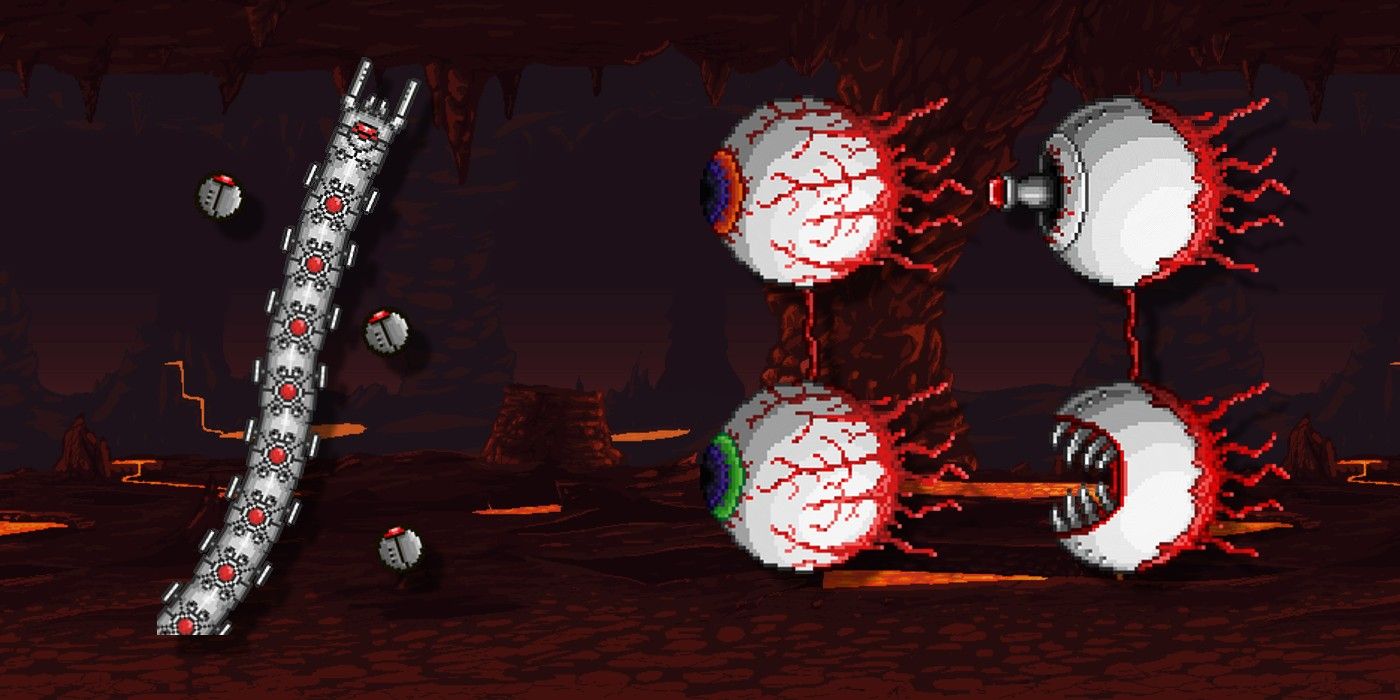 The Destroyer is Hardmode’s answer to the Eater of Worlds. This enormous Mechanical worm is much harder to defeat than its pre-Hardmode counterpart, but it’s probably one of the easiest Hardmode bosses despite the fact it has lots of health. This is because of the Destroyer’s susceptibility to weapons that hit multiple areas at once, like the awesome Daedalus Stormbow.

Skeletron Prime is just that: a much better version of Skeletron from pre-Hardmode. This boss is worth defeating because a) it drops lots of Hallowed Bars, and b) drops Soul of Fright, a crucial Hardmode crafting ingredient used in recipes for the Drax, Soul of Fright in a Bottle, the Flamethrower, and many other items.

You need to defeat the Twins, The Destroyer, and Skeletron Prime before the next boss, Plantera, will even spawn.

Plantera, The Monster In The Jungle

If you thought the Jungle was tricky in pre-Hardmode, you wait until you venture down there to defeat Plantera. You can find Plantera’s Bulb located somewhere deep in the Jungle — it spawns randomly, you must destroy it to spawn Plantera. Building a boss fight arena for Plantera is a bit more tricky because the boss moves quickly and passes completely through the terrain.

Plantera not only drops some great loot, such as a chance at the Grenade Launcher, Flower Pow, and Seedler, but defeating Plantera is also essential to get the Jungle key, which opens up the huge red temple in your Jungle biome. Once Plantera is defeated, new enemies will start spawning in the Dungeon, with better loot drops.

Once you defeat Plantera:

The Golem is a monstrous boss in the Jungle temple and is usually the next logical step after defeating Plantera. You might opt to take a break to summon and defeat the Empress of Light between the two bosses, you can check out our guide to that boss fight here. 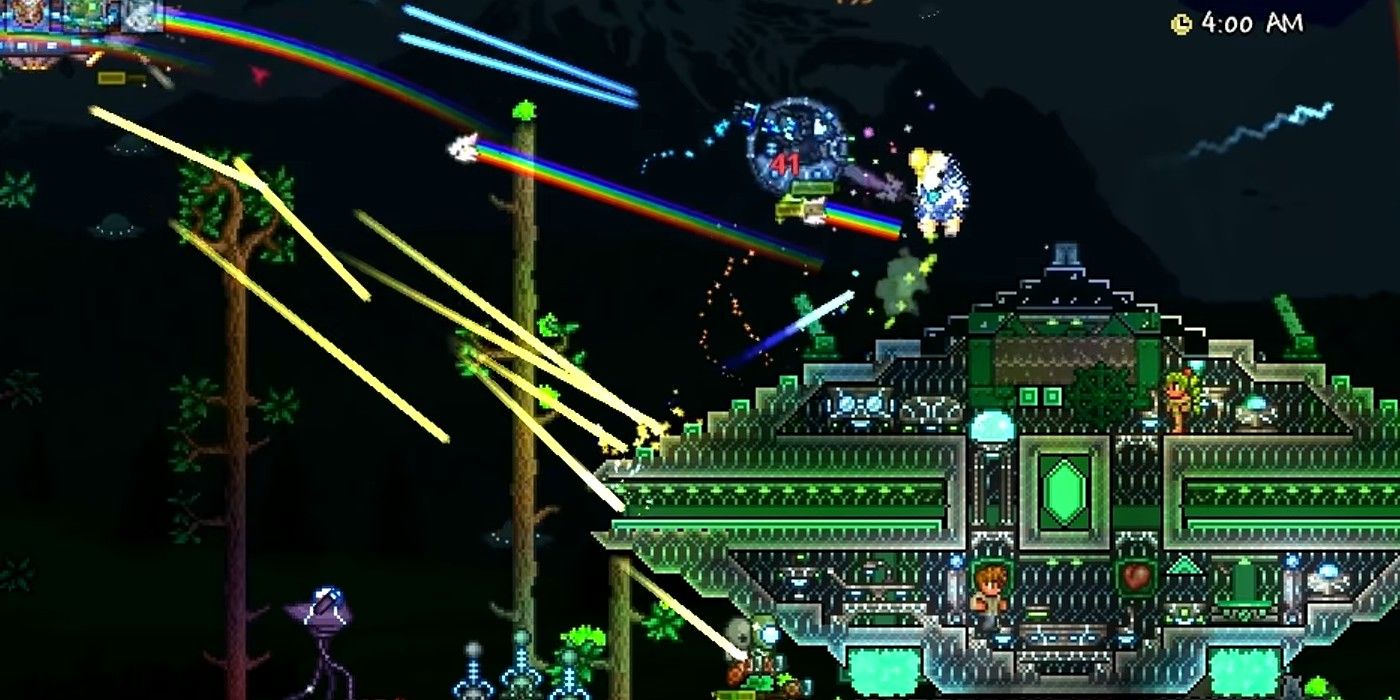 Why do you need to defeat the Golem? It’s a progression boss: upon defeating the Golem the Lunatic Cultists spawn outside the Dungeon. The Martian Invasion can now start (which has some awesome loot drops), and the Steampunker will now sell you her expensive wings.

Defeating the Lunatic Cultist will begin the Lunar Events — where those giant spooky-looking pillars spawn on your world — which eventually leads up to the Moon Lord boss fight, the final boss fight in the game.

Although the Cultists don’t drop any weapons, they do drop the Ancient Manipulator: this crafting station item is crucial to crafting many endgame Hardmode items in Terraria 1.4. Also, you will need to defeat them anyway to reach the “end of the game.” 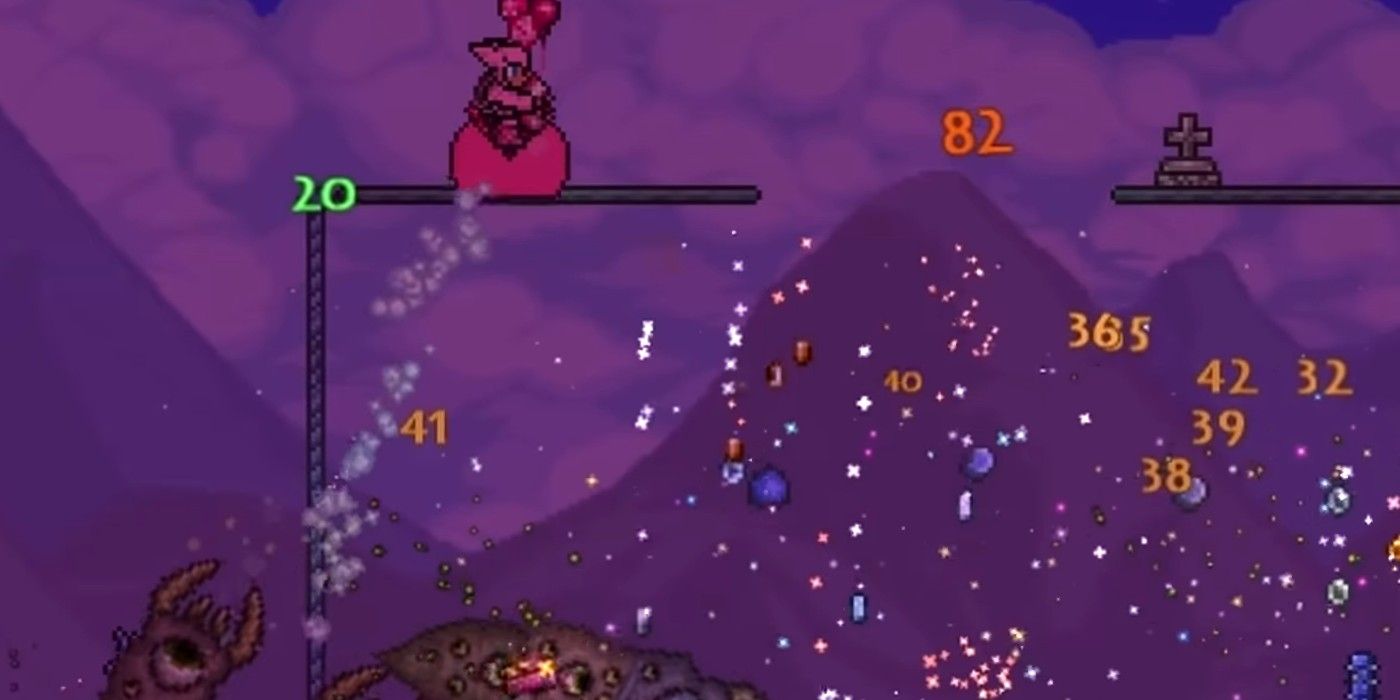 The Moon Lord – YOU MADE IT

The Moon Lord is the last boss fight in Terraria. This boss drops some of the very best items in the game, including the Meowmere, S.D.M.G, and the Terrarian yoyo. The only options after defeating Moon Lord are to continue on with some of the game’s optional bosses, like Duke Fishron, or to restart your world on a harder difficulty. Expert mode is waiting for you.

NEXT: The Best Terraria Mods You Can Get And How To Install Them 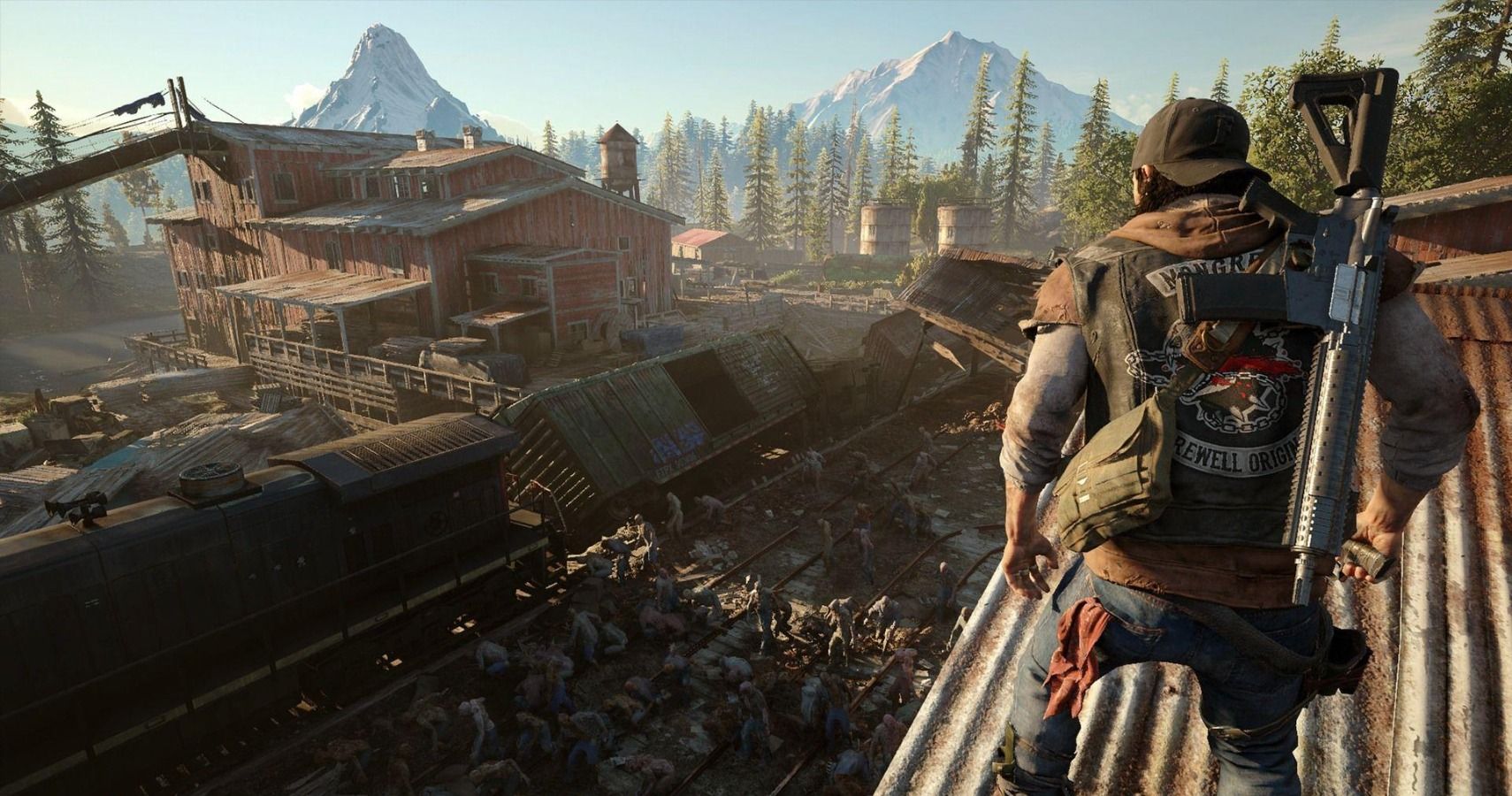