The Dark Souls series is infamous for how difficult it is, making even the most patient of players throw their controllers at the wall. With a game that requires so much patience, it can be beneficial to use a powerful build to make the rage less frequent.

Of course, the best thing to do is take a break, but some items present in Dark Souls 3 can ease the frustration. Besides summoning phantoms for co-op, your main way of improving your damage is to get better weapons or spells. With that said, here are the ten best PvE builds in Dark Souls 3 that make the game significantly easier.

Updated February 5th, 2021 by Charles Burgar: Nearly every build can flourish in PvE if the player is skilled enough. However, what makes a build great in PvE is a mix of damage, utility, and ease of use. Some of our original builds were rather vague, relied on late-game items, or were otherwise underwhelming. Not only have these entries been replaced, but we also added key stat and gear breakdowns for each build. This should make it much easier to gauge how to go about making a certain build. 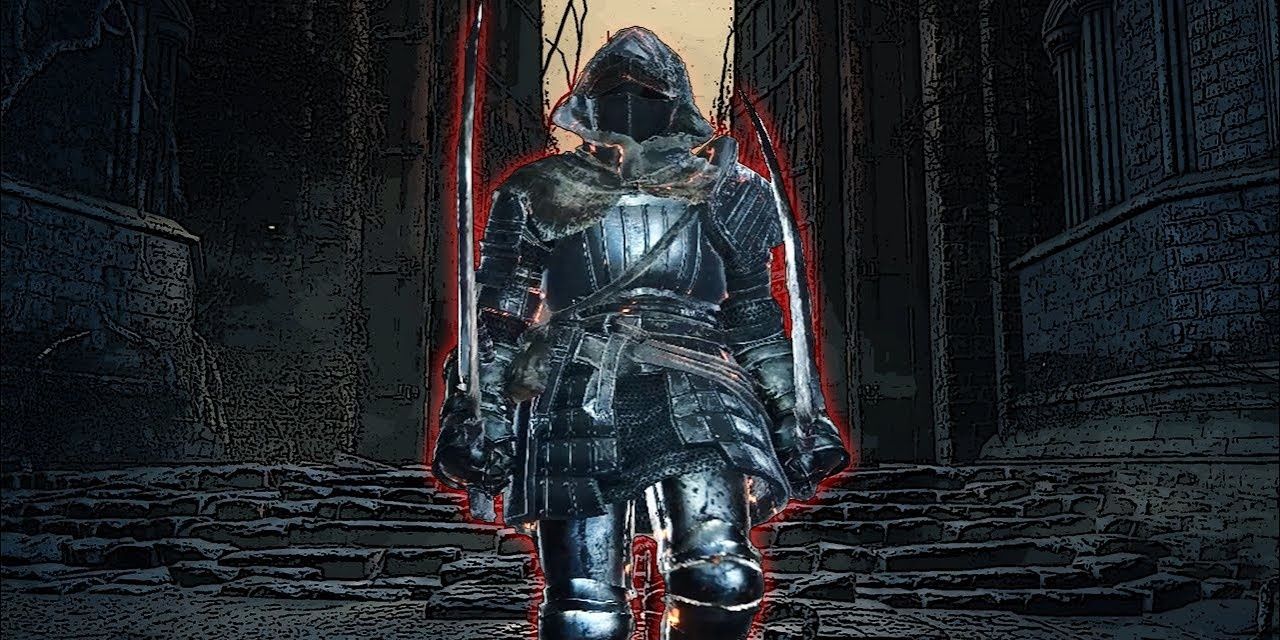 Both are included in the same entry because there is quite a bit of overlap between the two. If you talk to Yoel of Londor at the Foot of the High Wall Bonfire, he will return to Firelink Shrine and allow you to gain a free level. In exchange, you gain a Dark Sigil, allowing you to become Hollow. For this build, that’s perfect as Hollowing increases your damage if your weapon is infused with a Hollow Gem.

Bleed is a status effect you can inflict on enemies and some bosses, dealing a percentage of damage to their health bar and staggering the target. Rapid attacking weapons usually come with this effect intrinsically, so most bleed builds spec for some dexterity to use these rapid attacking weapons. Luck also scales the strength of bleed in this build, so grab as many Luck and Hollowed stacks as possible. When done properly, you can stagger most bosses in the game and rapidly defeat tanky enemies. It’s pretty good in PvP too. Just note that some enemies and bosses are completely immune to bleed, so be prepared for some boss fights to take ages. 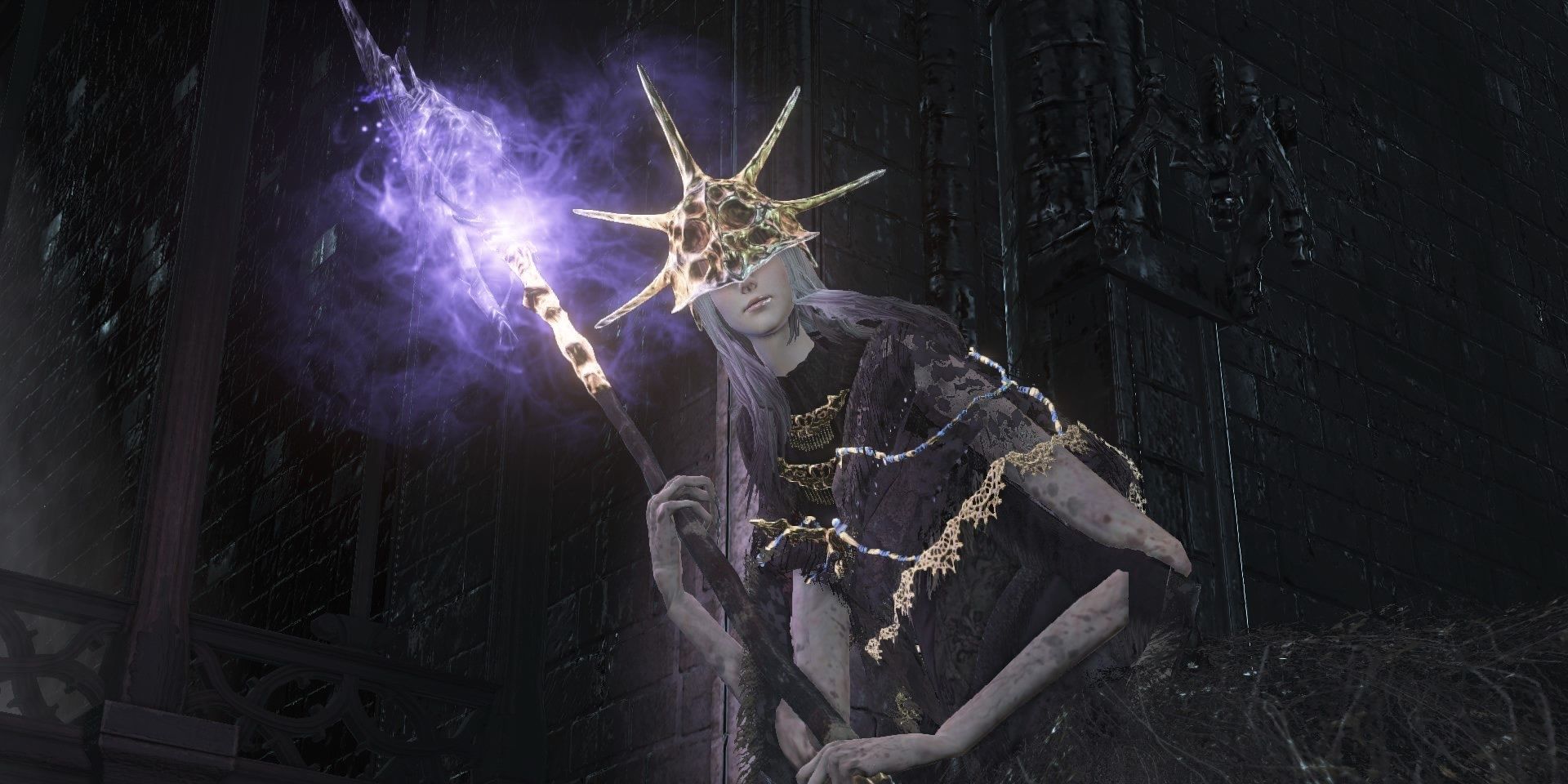 Hexes have seen a significant nerf in Dark Souls 3 compared to the second entry, distributing these unique spells throughout every school of magic instead of being a dedicated magic archetype.

With that in mind, Hexes are still fantastic for players who want plenty of utility with their build. Want to prevent a boss from using any special attacks? Use Vow of Silence. Want to make an enemy instantly bleed? Using Dorhy’s Gnawing. It’s a very versatile school of magic that veteran players should try. Upgrade your faith and intelligence evenly, trying to hit at least 30 in each stat. It is worth the effort required, even if the build only starts to come together towards the end of a playthrough. 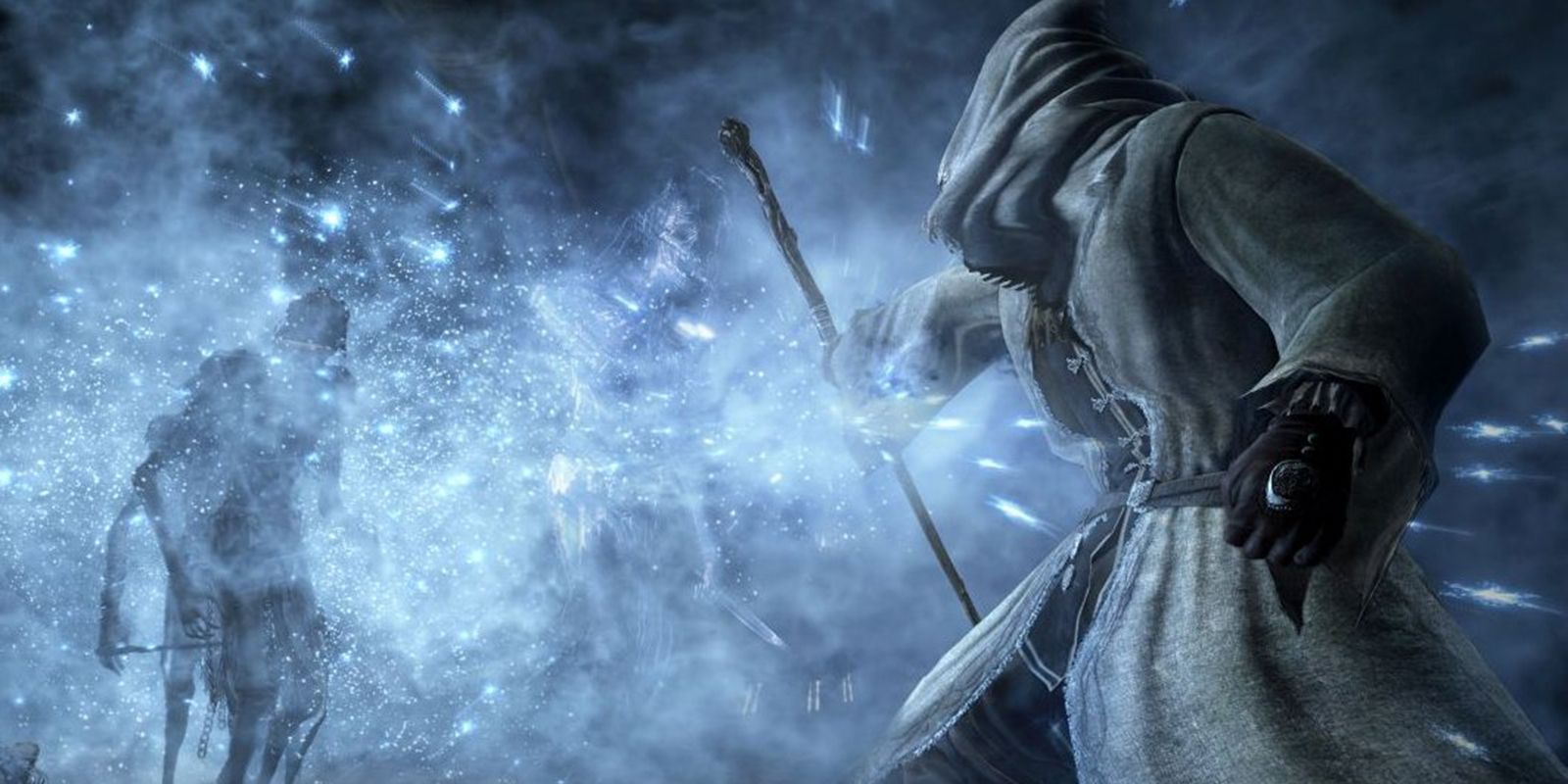 Pure mage characters take a long time to come “online”—capable of finishing the game comfortably. When they do, mages can do nearly anything you would want.

You can either focus on a pure mage build, allocating most of your levels in intelligence and attunement, or you can run a hybrid build with strength or dexterity. For the former, look out for the Crystal Sage’s Staff and any Crystal spells. If you are playing a hybrid build, check out the Moonlight Greatsword. This sword does damage mainly based on your intelligence and can shoot projectiles with its heavy attack. Whichever route you take, you’ll be one-shotting most enemies by the end of a Dark Souls 3 playthrough and subsequent NG+ playthroughs. 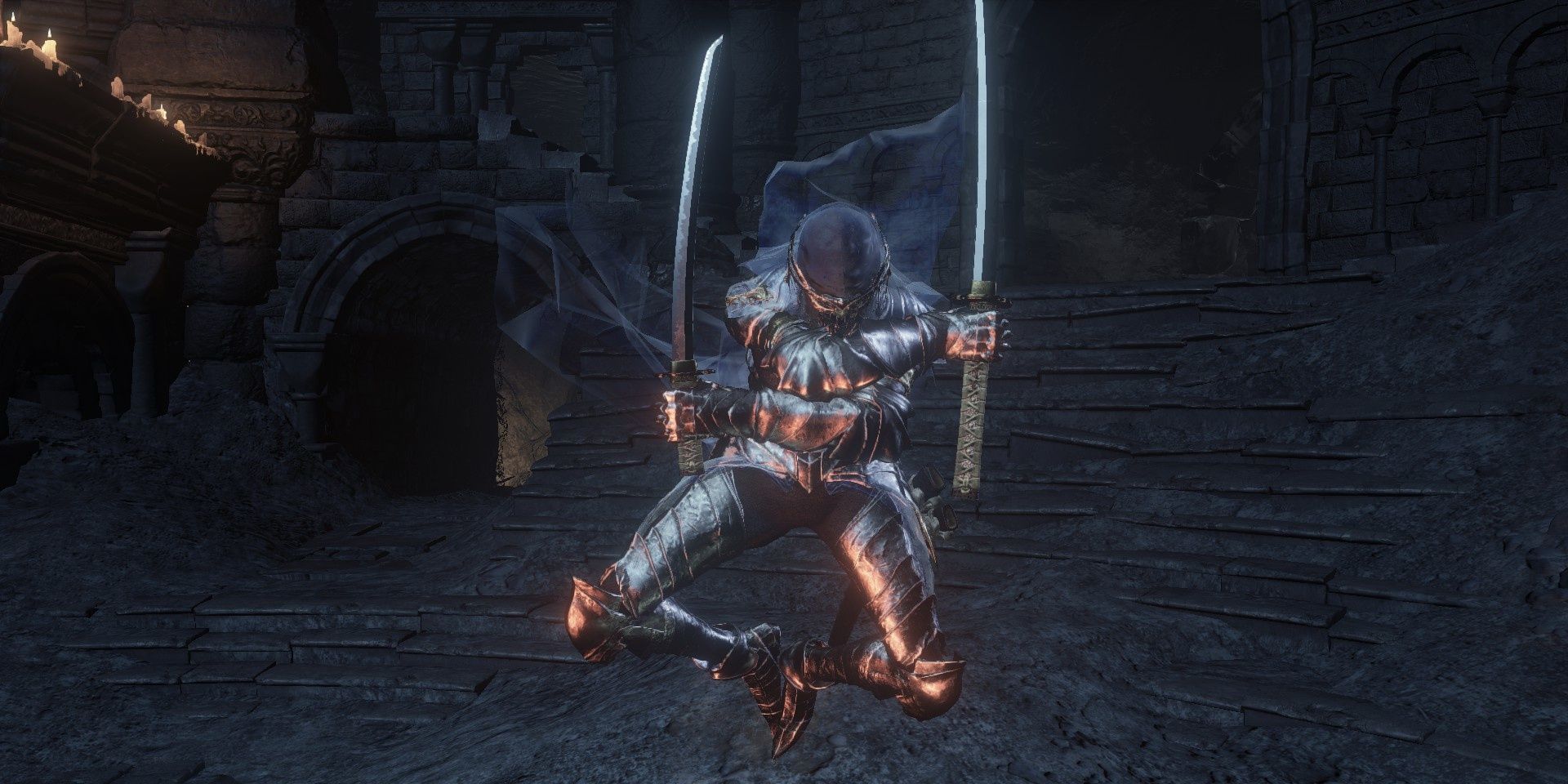 Dexterity might not be as absurd in Dark Souls 3 as in previous installments, but it’s still a good stat. Some of Dark Souls 3’s best weapons, such as the Sellsword Twinblades and most katanas, scale absurdly well with dexterity.

Once you reach Firelink Shrine, defeat the Sword Master that roams near the Firelink Shrine Tower. Killing him will grant the Uchigatana, a fantastic starting weapon that will carry you through the rest of a playthrough. Scale your dexterity to 60 towards the end of your playthrough or the start of your NG+ playthrough to squeeze as much damage out of your weapons as possible. Sharp Gems are also excellent for dexterity builds. 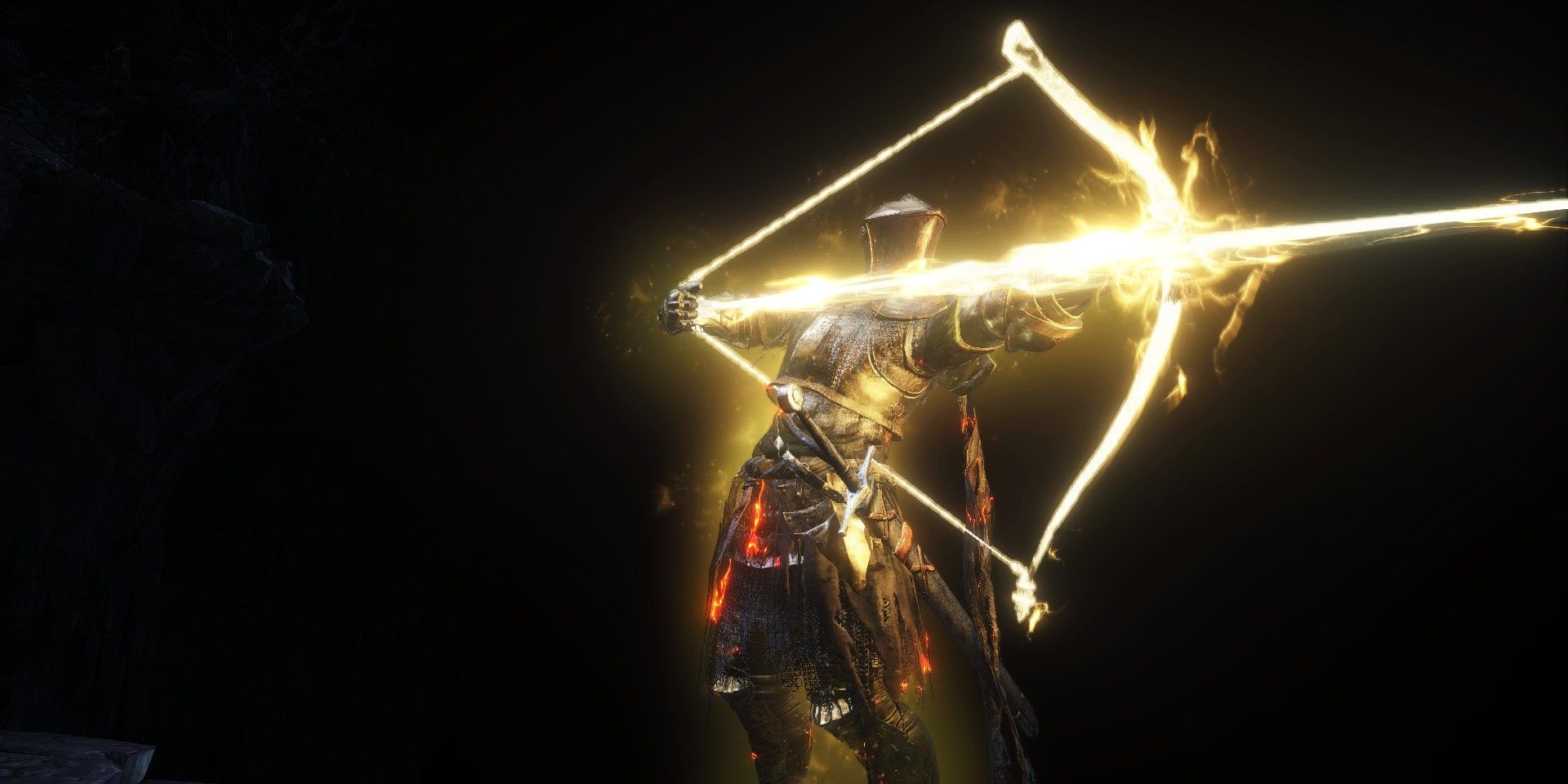 Due to Ashen Flasks and a dedicated mana resource being introduced in Dark Souls 3, miracles aren’t as strong as they used to be. They can still be formidable in PvE, however. When combined with a faith stat of 60, a Sunlight Talisman can output some powerful miracles. Sunlight Spear and Lightning Stake will shutdown most enemies, while healing miracles will be comparable to an upgraded Estus Flask. If you value utility but love melee combat, this build is for you. 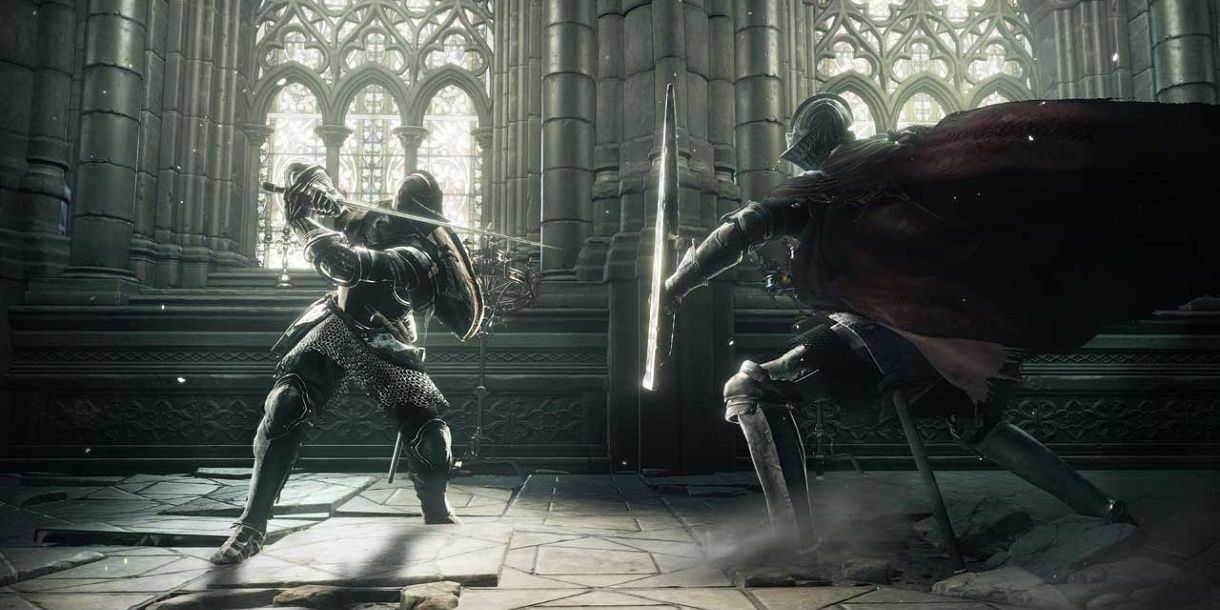 If you’re indecisive about what to play, it’s hard to go wrong with a quality build. Quality builds are those that invest equally into dexterity and strength to scale a weapon’s Attack Rating as high as possible. In practice, this means you can use virtually every weapon in the game.

You can use any weapon you enjoy; just be sure to infuse it with a Refined Gem. If you care about min-maxing, the best weapon for a quality build is the Hollowslayer Greatsword, a boss weapon obtained after killing the Curse-Rotted Greatwood. It scales absurdly well with both strength and dexterity, reaching an Attack Rating of 516 when both stats are 40. It also has a great moveset with a healthy mix of hyperarmor (preventing you from getting stunned mid-animation) and swings. 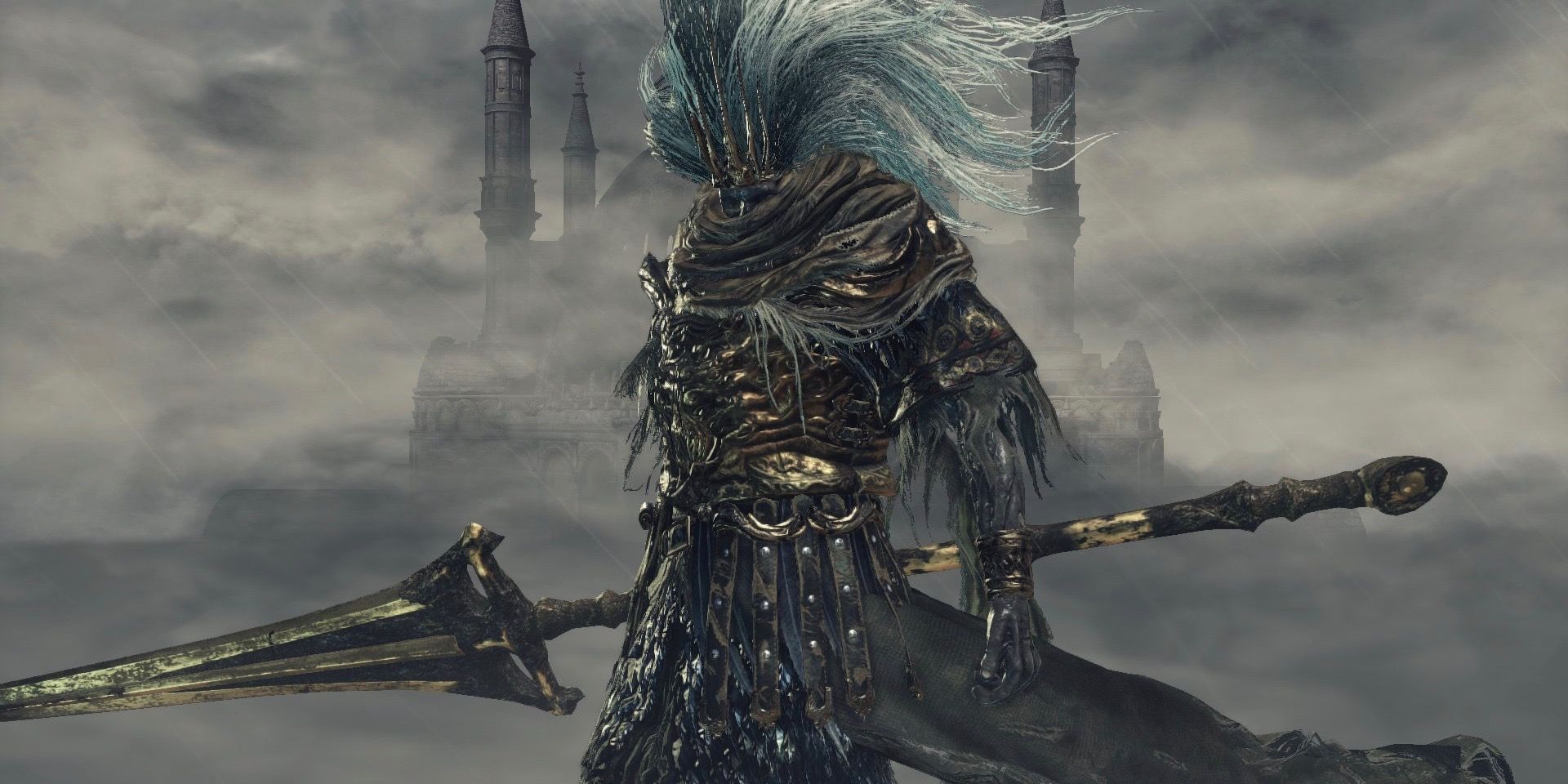 You don’t have to go straight into one stat. Instead, you can distribute your levels into different stats to get the best of both worlds.

If you do decide to play a hybrid build, consider focusing on upgrading your dexterity and faith. The Dragonslayer Swordspear is a good choice for this, as it scales off of both your faith and dexterity quite well. For an earlier alternative, get any weapon you favor and infuse with a Blessed or Sharp Gem to get even more damage. Best of all, you can use healing or lightning-based miracles to deal with any situation. The versatility on offer is some of the best you can find in Dark Souls 3. 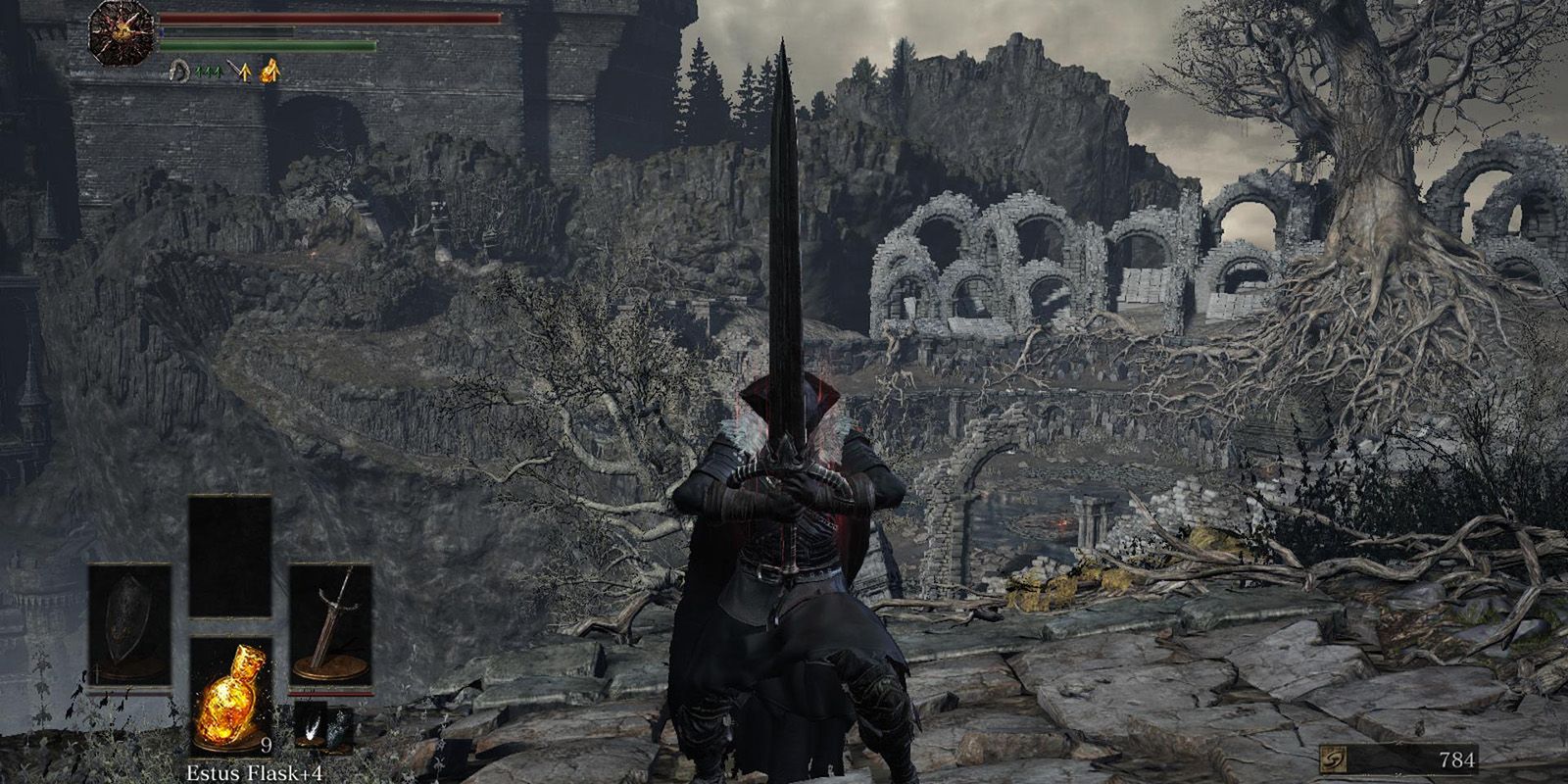 If casting spells or miracles don’t sound appealing, try out a pure strength build. Allocate at least 60 points into strength and watch as you one-shot all but the toughest of mobs and bosses.

Greatswords are a fantastic weapon of choice for this, with weapons like the Black Knight Sword and Lothric Knight Greatsword having good movesets and great scaling. Ultra greatswords like the Fume Ultra Greatsword allow users to wield weapons twice their size and deal ridiculous amounts of damage. If you can stand the slow playstyle, this is one of the best builds any player can use. 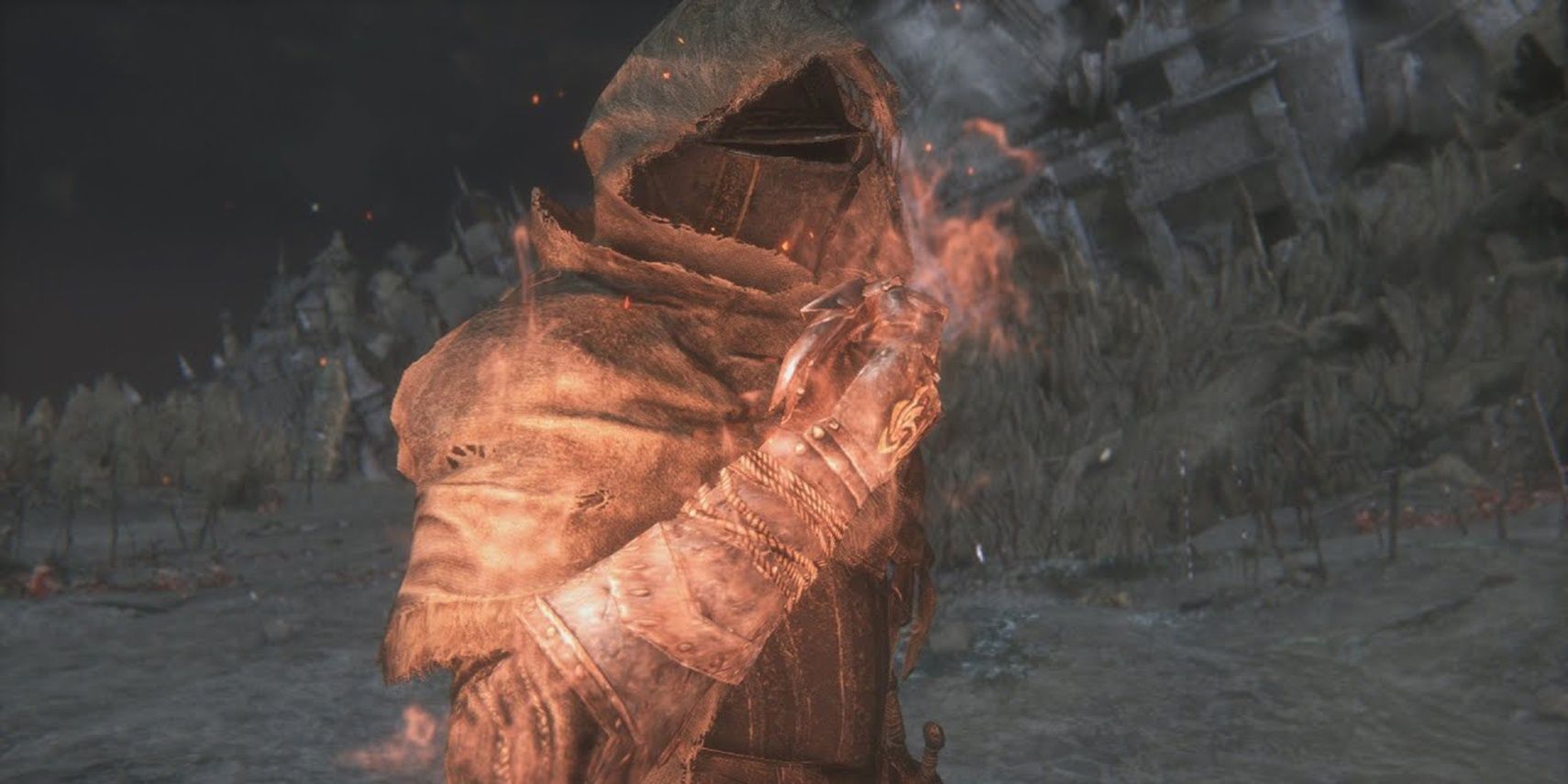 With a series focused on linking the fire, it’s surprising how lackluster pyromancy was for most of the series. Thankfully, Dark Souls 3 is an exception to this.

With 40 points in both faith and intelligence, pyromancy will deal significant damage and outclass most hexes. Plenty of great damage pyromancies such as Floating Chaos and Black Serpent allow you to deal with nearly any situation. Power Within and Flash Sweat are also some fantastic buffs to power you through the toughest of encounters. You can even use the Demon Scar to cast pyromancies while cutting through mobs with a burning curved sword. Versatility, damage, defense, this build has it all. 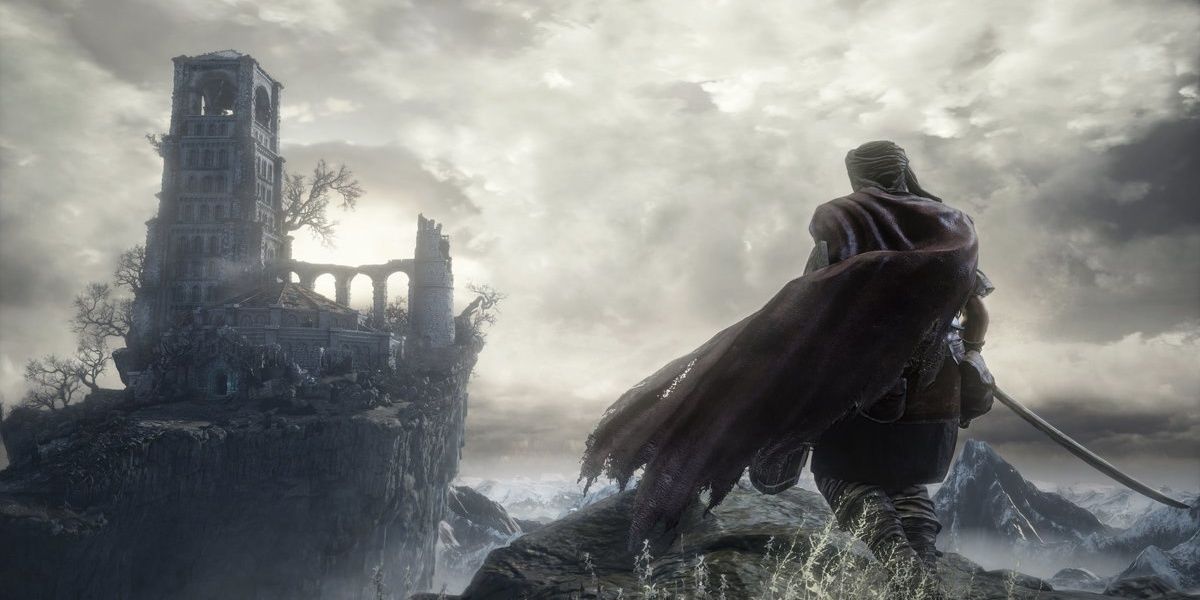 There’s a reason the community calls these pair of curved swords the “Sellsword Winblades.” The damage this pair can dish out is nearly unmatched in Dark Souls 3’s PvE content.

Funny enough, it’s also the easiest build to get going on this list. Pick the Mercenary class, and you’ll already start with these blades. Focus on obtaining a Sharp Gem in the early game, then infuse the Sellsword Twinblades. From there, increase your dexterity stat to 60. You’ll be outputting as much damage as some greatswords twice as quickly. It’s the reason why so many speedrunners and PvE players use this weapon over others. 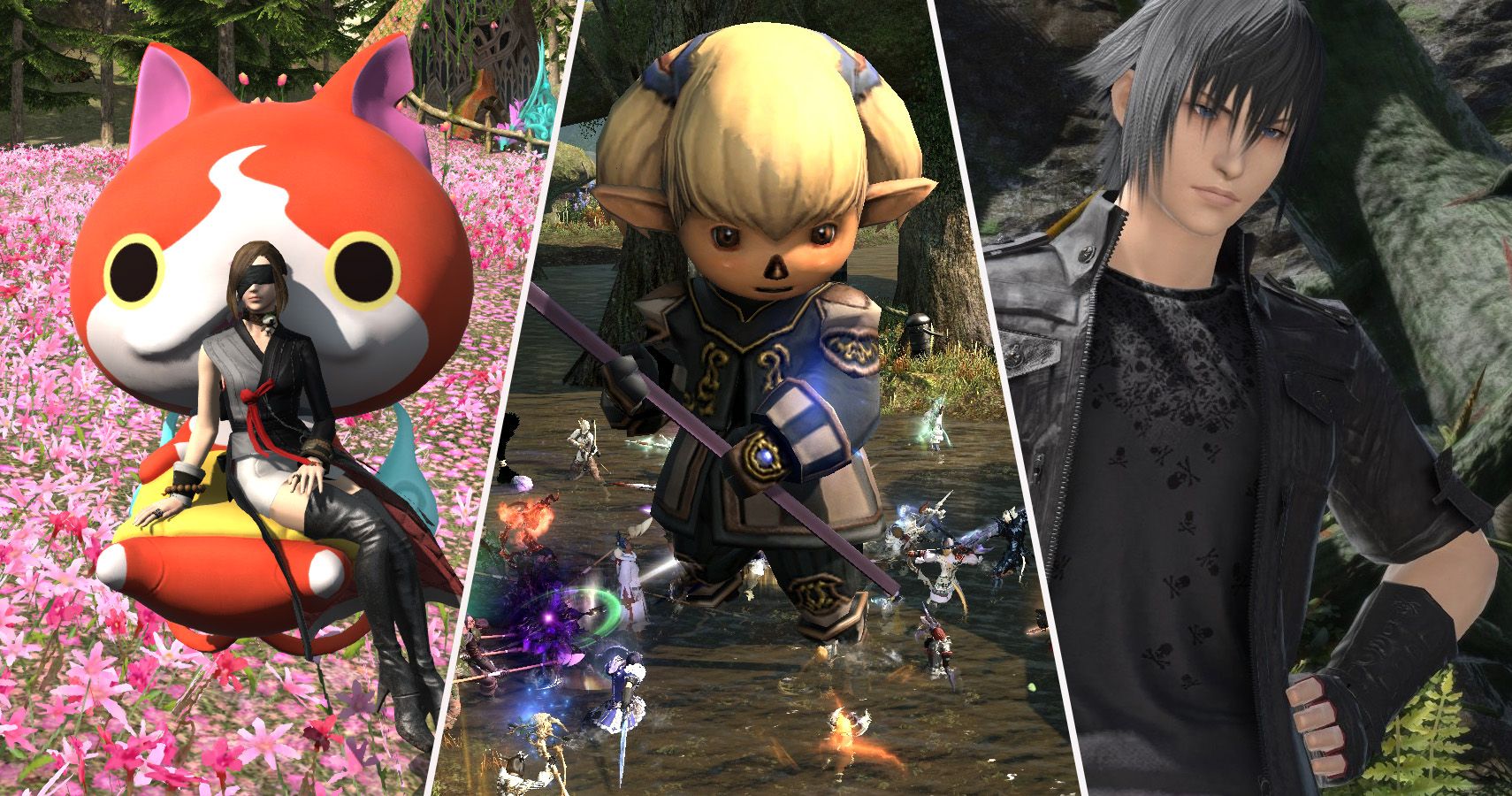