Last week Dreams launched in early access, and as with Media Molecule’s previous games, the studio is aiming for a lofty goal: to make the creation of user content easy, accessible, and fun for everyone. Even if you consider yourself artistically challenged, you may want to give Dreams’ creation tools a shot – not only are the basic controls simple to learn and use, Media Molecule has crafted some remarkably powerful tools that will have you pumping out impressive effects in no time flat. Here are our favorites.

By far the most important and powerful tool in Dreams, Looseness effects the “fuzziness” of objects that gives the game its distinct, sublime art style. As the name implies, the Looseness tool loosens or tightens the “material” objects are made out of, resulting in wispy strands, painterly strokes, or many other styles, called Flecks. Within seconds, you can turn a simple curved surface into a lush grassy meadow. Applying a large amount of Looseness to an object will degrade the actual shape, giving scenes a more evocative – and some might say dreamlike – feel to them. The first image above demonstrates several different Flecks applied to the same base cube. The second image applies an additional modifier called Impasto, which augments Looseness even further. As you can see, transforming simple shapes into something impressive takes virtually no effort or artistic talent, so don’t be afraid to experiment yourself!

While you’re busy fuzzifying objects, you may as well throw an additional Effect or two on them. Effects are a category of, well, effects, which you can apply to the Flecks on your objects, adding subtle animations to them. Add the Flow effect to a blue stretch of the landscape and suddenly it looks like a river. Or throw the Evaporate effect on a white streak above a chimney to transform it into a rising plume of smoke. The Effects panel has several more options to choose from, all of which bring objects to life with very little effort. One of the first art tutorials tasks you with transforming the simple scene above, purely by adding some colors and effects to the objects. The second image is what I managed to accomplish in a matter of minutes – and it looks even better in motion! 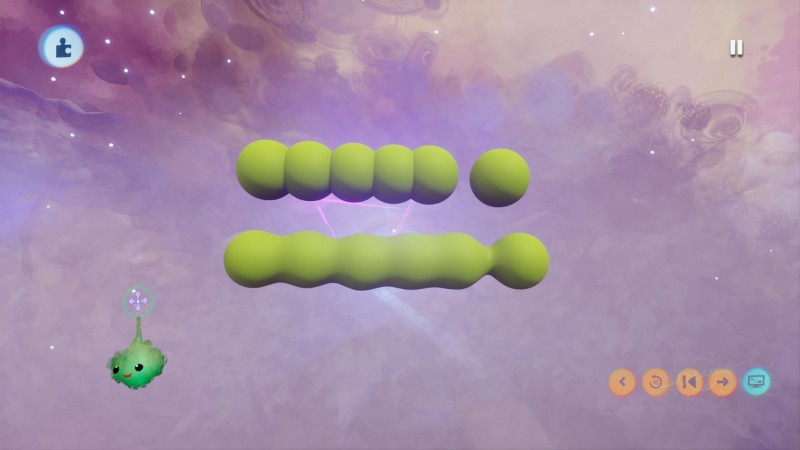 Sculpting your own 3D models is an intimidating undertaking, but once again Dreams has another powerful option at your disposal. The Stamp tool allows you to place down basic shapes in 3D space. By combining these shapes, as with the first row of spheres above, you can make your own custom objects, but they can still look pretty primitive. That’s where the Blend option comes in – turning up this setting will cause the new shape you’re maneuvering to seamlessly morph into the other objects you’ve already stamped down – just like the second row of spheres. The higher the setting the more blended the shapes become, and you can also switch it to subtract mode to cut out sections of objects as well. Blending may not turn you into Michelangelo, but you may be surprised by the interesting shapes you can create, even if you don’t consider yourself an artiste.

So, you’re creating your own level and you want to add a bunch of stairs leading to a higher area. Sounds tedious, right? One of Dreams’ most surprising tools makes this action a breeze. After laying out an initial block, you can make an identical copy with the Clone ability. Before you place that second object down, however, you can insert as many more copies as you want with the Add Clones tool – simply press left on the D-pad to add a clone in-between the two objects, or press right on the D-pad to add more clones on the outside. What makes the Add Clones option truly impressive, however, is it automatically spaces out all of the clones, and takes into account any changes you’ve made to the size and rotation of the object, so you can easily create a perfect spiral of objects or a string of shrinking shapes. The M.C. Escher-like bridge in the second image above was done in a matter of minutes by using the Add Clones and Mirror abilities. 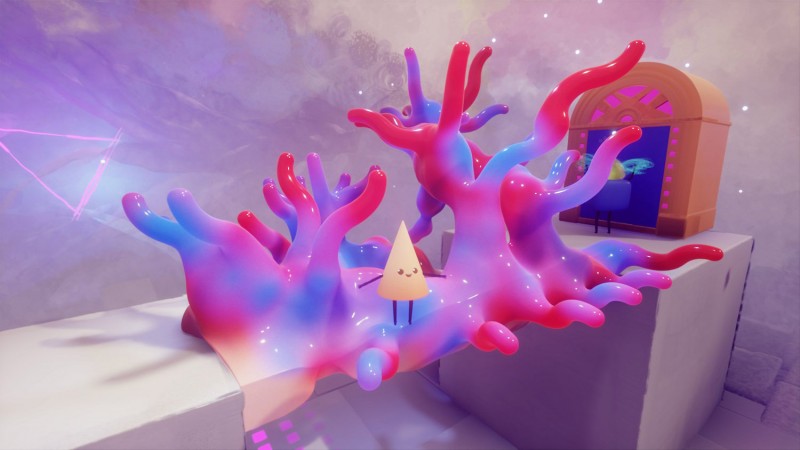 Once you’ve got an object you’re happy with – or even one you’re not happy with – you can add a Finish to it. Finishes apply an additional aesthetic effect to objects that make it seem like they’re made out of a different material – such as a shiny metal or a glossy wax. Depending on the lighting and color of your object, applying a Finish doesn’t always make a huge difference – but when it does, it can completely transform a simple shape into a much more convincing object. Like many of these tools, Dreams’ Finishes are also just fun to play around and experiment with, like this psychedelic lava lamp bridge I made for… well, no reason, really. 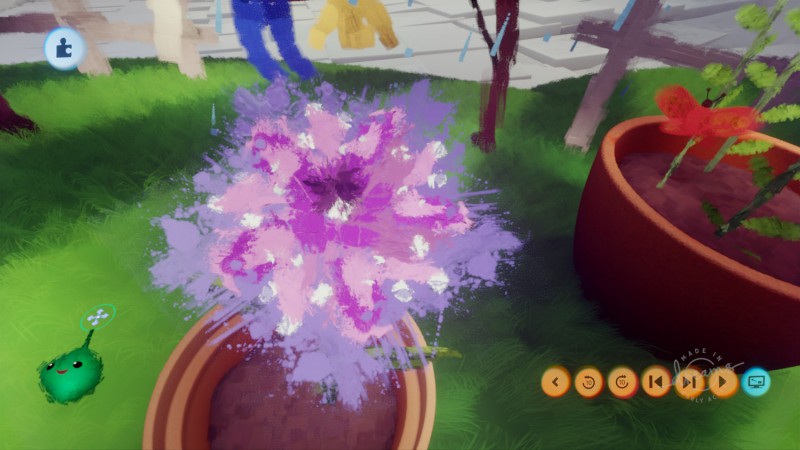 I didn’t hold a lot of hope in my artistic ability to “paint” in Dreams, but the Kaleidoscope guide is another foolproof tool for creating impressive content above your own perceived skill grade. One of the art tutorials tasks you with creating some flowers. Rather than just doodling a flower with the kind of brush you’d find in Photoshop, however, you first choose one of Dream’s artistic Flecks, all of which are visually interesting in their own right. After you’ve selected a Fleck – one that is appropriately petal-like in this case – you then stamp it into 3D space much like you would in sculpt mode. What the Kaleidoscope guide does is create exact copies of the Fleck evenly spaced out in a circular pattern. The result? Instant flower! The Kaleidoscope Guide also works if you want to draw more complicated shapes, which you do by simply holding in the trigger and moving the Fleck around instead of stamping it once. Even if your artistic talent begins and ends with stick figures, you may be surprised by what you can pull off with the added Fleck styles, Effects, and symmetrical guides while drawing in 3D. 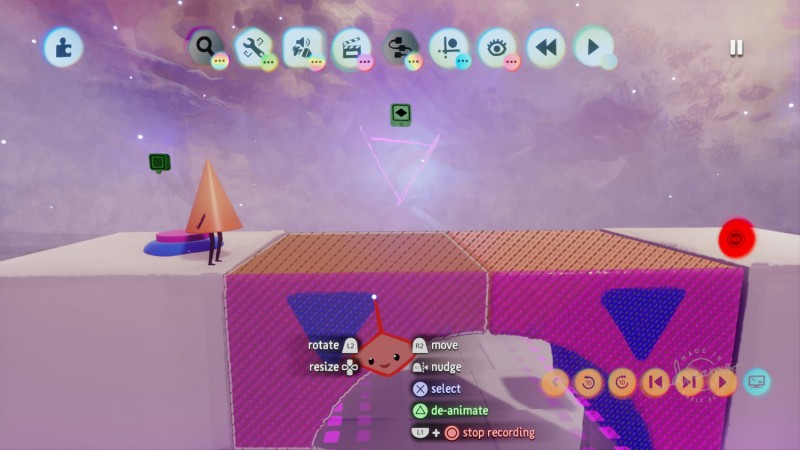 Going into Dreams I knew just enough about animation to be afraid of Keyframes, which are typically found scattered across complex timelines. But by this point I should’ve known that Dreams would transform them into a quick and easy tool to set up your own animations and interactions. You can get a full rundown of Keyframes in Dreams’ excellent animation tutorial, but basically, you can simply drag a Keyframe gadget into a scene and then move around whatever you want to change. Those changes – a platform floating across a gap, a character blinking, or pretty much anything else you can think of – will be re-performed once the Keyframe is activated, whether by an in-level trigger, a button press, or once again pretty much anything else you can think of. Keyframes offer a bunch of different settings you can tweak to speed up, slow down, or repeat the animation, making them super versatile. 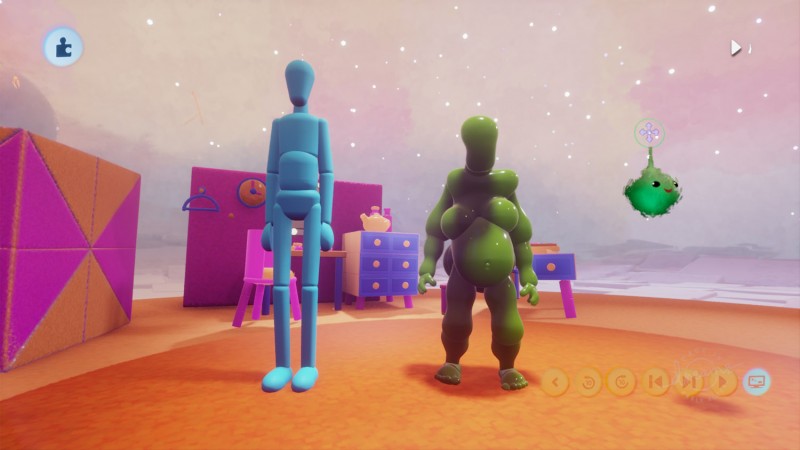 Most video games have characters, and those characters need to be animated. While Dreams’ animation and programming tools let you create your own interactive character from scratch, the Blank Puppet Deluxe gadget probably already has most of the options you’re looking for. Selecting this gadget drops a blue art model into your scene, with physics, walking and jumping animations, and a host of other logic options already baked in. The puppet remains fully editable, however; not only can you add more animations and functionalities, you can also sculpt the body however you want. Using the Blend option and some basic spheres you can flesh out the puppet into your own surprisingly unique (and/or grotesque) character in less than an hour. Just don’t blame Media Molecule if your subsequent creation gives you nightmares. 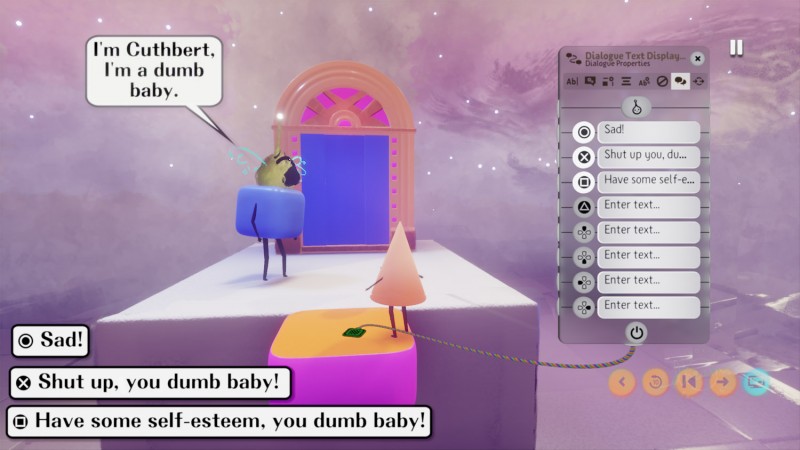 A lot of Dreams’ gadgets don’t have tutorials yet, and Dialogue Text Displayer is one of them. As you may guess from the title, however, this gadget lets you easily set up text boxes with branching paths the user can select via different button presses. The gadget also includes a ton of options for customizing the dialogue box and font, and you can even plug in a USB keyboard to type in your text prompts, so get a grip, Cuthbert! 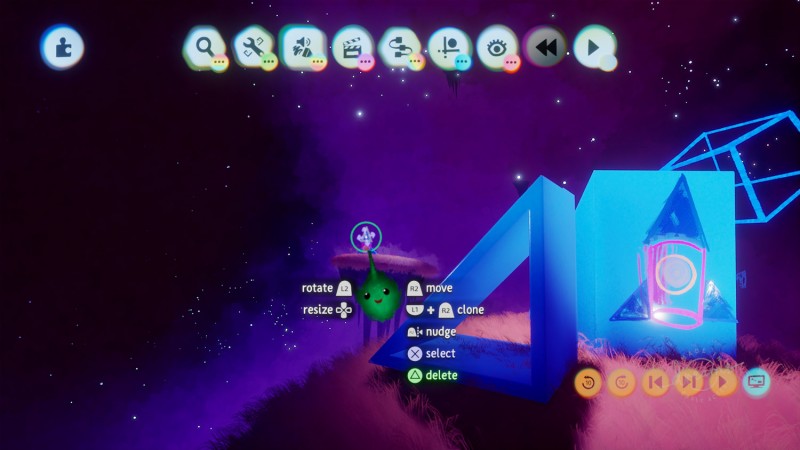 It may not seem like it, but I’ve saved the best tool for last. “Cool” is not an adjective often used to describe camera controls, but Dreams’ Grab Cam has earned the distinction. For the most part, navigating your viewpoint around the environment works just like you’d expect it to. However, pressing the R1 button will grab onto whatever object your imp (i.e. pointer) is currently on, allowing you to rotate around it with ease and quickly zoom in or out. If you’re actively holding the object, changing the viewpoint doesn’t affect the object’s orientation, which is great for judging a potential stamp placement from all angles. Even better, if you hover over an object and tap the L1 button, you’ll instantly warp over to it, which makes traveling to the far end of a level a snap. Grab Cam may not be the sexiest tool, but its ease of use is a big part of why sculpting, painting, and designing levels is fast and fun instead of being a tedious chore.

For more on Dreams, check out Javy’s weeklong dive into the game, our beta livestream, and our exclusive Dreams Hub. 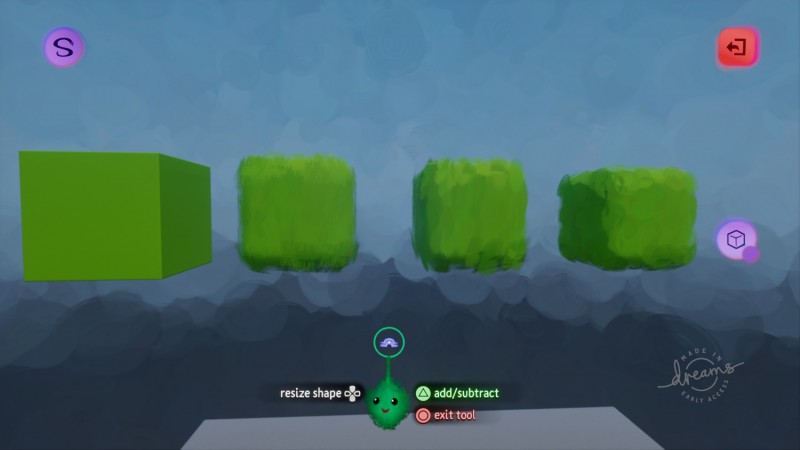 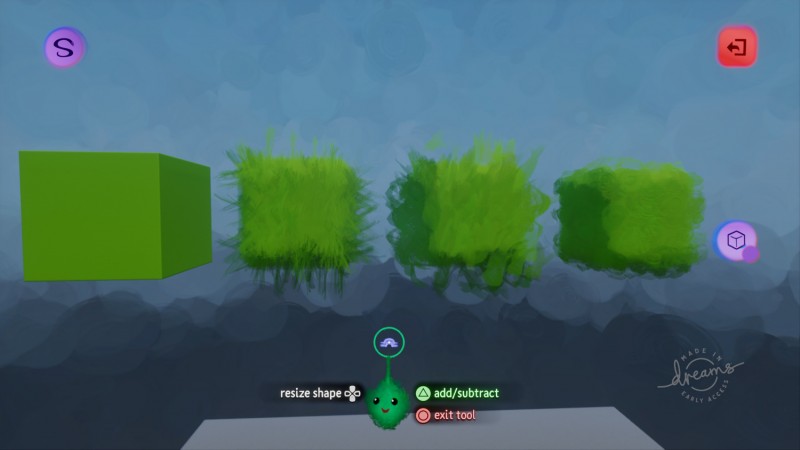 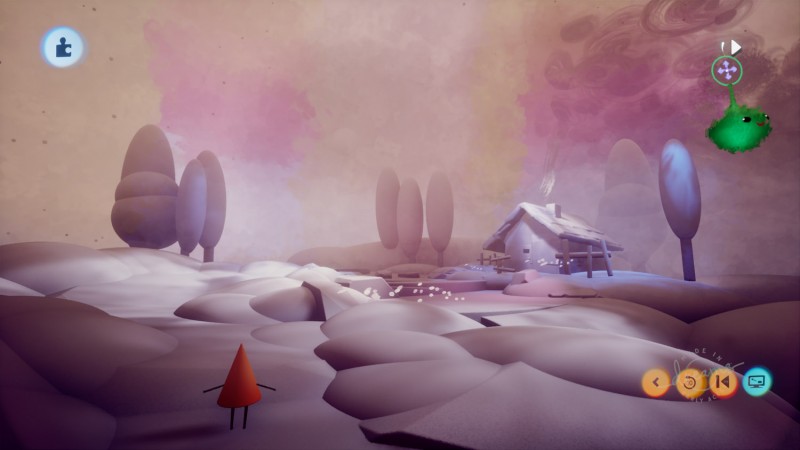 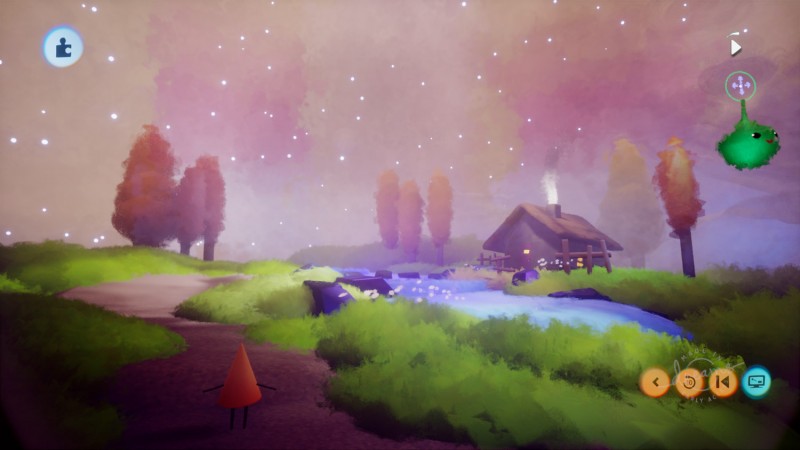 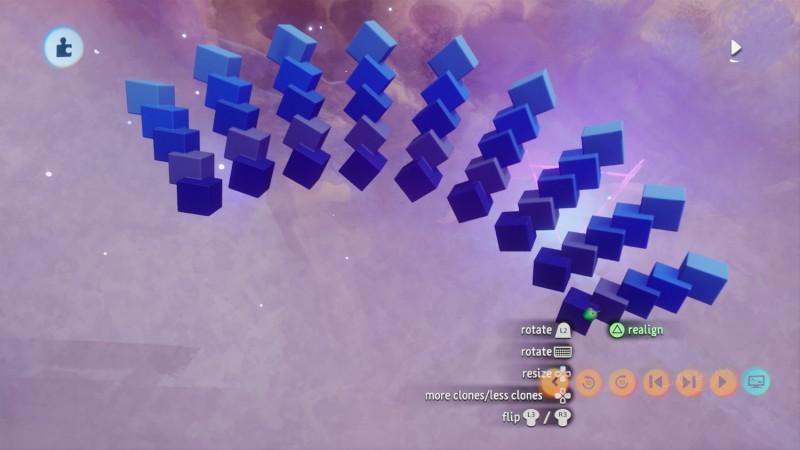 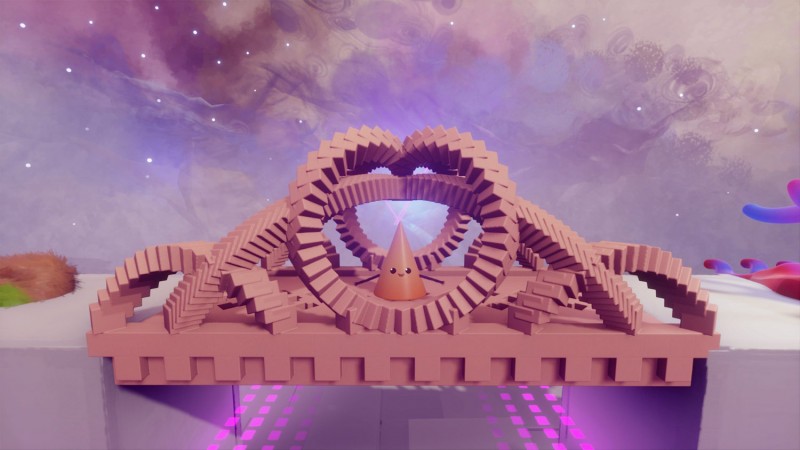