Much like with starships, sometimes you just want to punch a robot in the mouth. Options in the land of video games are pretty good, and include action-oriented titles, strategy games, and even simulation-style options. In the land of tabletop gaming, however, good solutions can be a bit harder to sort through.

Board games and miniatures games benefit from less of a recency bias. Old board games hold up a lot better than old video games, and for that reason many legacy titles remain relevant over a much longer period of time. But there are a handful of newer games that can help satisfy that robot-fightin’ itch. We’ve organized four of the best options in a way that fans of mech games should be familiar with — by weight.

One of the most delightful new mech games to come out in a long time is by Gamelyn Games. It’s called Tiny Epic Mechs, and it began as a successful Kickstarter in 2018 before shipping to backers in 2019. I picked up my copy on Amazon, but you can also find it at the official Gamelyn website as a deluxe package, or at many local game stores.

Tiny Epic Mechs, as the name implies, is small enough to fit inside your pocket. But the little box hides a whole lot of content. The wow factor comes from Gamelyn’s proprietary game pieces called ITEMeeples. They turn traditional pawns into little action figures, with peg-mounted weapons and other items that can be “held” in their hands. It also ups the ante with little robot mech suits that you can put your playing piece inside and stomp around the battlefield with.

How I got into tabletop wargaming and how you can, too

The arena-style combat game plays from 2-4 players, and relies on programmable movement with players locking in their actions all at once and revealing them together at the same time. Expect a little bit of slapstick as pieces carom around the board trying to draw a bead on each other. Playtime is around 30-60 minutes.

Weta Workshop — yes, the same folks behind the Lord of the Rings and Hobbit films — makes board games. Weta’s Giant Killer Robots GKR: Heavy Hitters has had a sizable presence at conventions the last few years, including Gen Con and PAX. You can find it at local game shops, and on Amazon, but be prepared for sticker shock: It costs over $100.

For the money, you get some excellent pre-painted miniatures, the largest of which is over 5 inches tall. There are 16 miniatures in total, plus 10 buildings and hundreds of cards. Taken together, GKR is a great value for the money.

It also helps that the gameplay is very, very good.

Unlike many lesser mech games, GKR rarely devolves into a scrum in the center of the board, with two or more units locked in close combat for turns on end. These robots are nimble, but the setting also requires them to cover as much distance as possible tagging buildings around the map for destruction. It’s a great way to score points, and it also has the side effect of removing cover over time. With fewer places to hide behind, things tend to move quickly in the endgame. Playtime is listed at 60-90 minutes, but some matches can run longer. 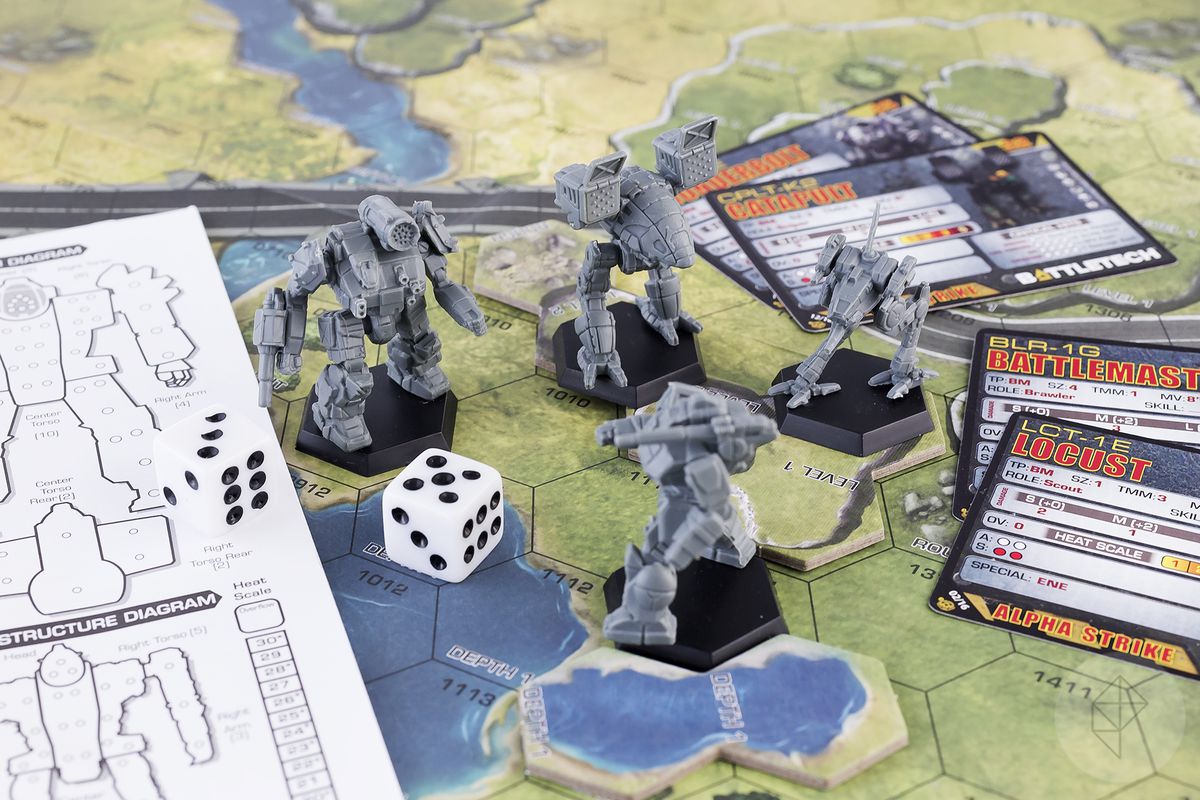 BattleTech: A Game of Armored Combat

You can’t go wrong with the newest BattleTech starter sets from Catalyst Game Labs. We’ve reviewed both of them here at Polygon, and they’re very affordable. The BattleTech Beginner Box is less than $20 on Amazon, while the larger BattleTech: A Game of Armored Combat is less than $50, and includes a much larger assortment of plastic miniatures. Trouble is that both of these starter sets are very light on actual gameplay content. The system itself is introduced concisely, but there’s just not much to do once you have the basics down.

That’s where the newest iteration of the Chaos Campaign: Succession Wars module comes in. Available for free at the Catalyst online store, it’s a 33-page supplement that lets players create and run their own mini-campaigns using just the bits inside these starter set boxes. It’s a great way to string a rainy-day activity into a regular gaming group.

BattleTech: A Game of Armored Combat

One of the most delightful surprises to come out of Games Workshop in recent years is the Adeptus Titanicus line of wargames. The system itself is a remake of a much older one that first came out in 1988. But it’s not necessarily the lore that makes it so interesting. Instead, it’s the sheer scale of these battles.

Assembling and painting a beautiful army of Games Workshop miniatures means very little if you don’t have the right kind of tabletop scenery to make for an interesting battlefield. Like Warhammer 40,000: Kill Team and Necromunda, the design of Adeptus Titanicus reduces the amount of space that you have to fill with terrain in order to play. The models themselves are also highly poseable, adding lots of value on the hobby side of the hobby wargames equation.

But Adeptus Titanicus is also at a completely different scale (about 8 mm) than just about anything in the Games Workshop catalog (about 28 mm). The largest Titans in the game are called Warlords, and each one stands nearly 6 inches tall. A single humanoid miniature from any other Warhammer setting would be something like 1⁄4 inch tall by comparison. On the table, you’ll be simulating company- or division-sized engagements on the low end, and perhaps even larger if your collection gets any bigger than what comes in the core boxes.

There are two options available right now for getting started. Adeptus Titanicus: Grand Master Edition was out of stock for a long while, but is available now at $299. It comes with two of the larger Warlords and some plastic buildings to get you started. The more affordable Adeptus Titanicus: The Horus Heresy set comes with smaller mechs and far fewer pieces of terrain, but only costs $127.50.