As the preview season for Magic: The Gathering's Commander Legends: Battle for Baldur's Gate begins to wind down, we're starting to see some of the unexpected power of the set begin to creep in. Though the set is still notably lower power than the previous Commander Legends set, we've had a few more bomb cards revealed to show there are a few tricks up Baldur's Gate's sleeves.

In today's highlights, we have a chaotic commander with serious combo potential, a way to shift your opponents' creatures around the battlefield, and one of the strongest goad cards in the whole set. 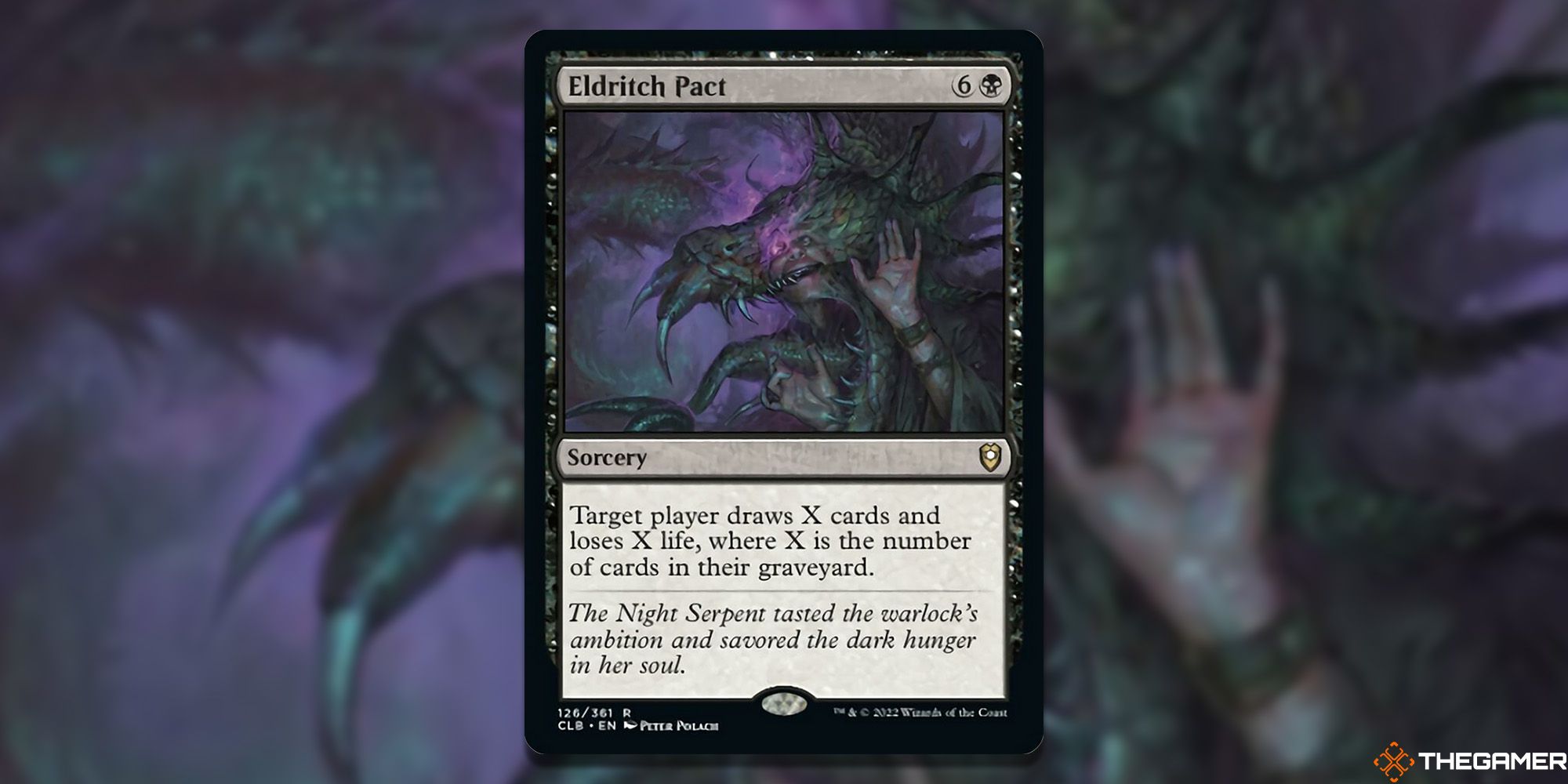 Target player draws X cards and loses X life, where X is the number of cards in their graveyard.

This is a bizarre card, but is full of potential. On the one hand, it's a basic card draw tool, as paying life for effects like this in Commander is often worth it. Card draw effects that grab so many cards like this tend to either be wheel effects (Sway of the Stars, Blood for the Blood God!, Memory) or designed as game-ending combo pieces (Enter the Infinite). It's nice to see a card that lets you just get cards into your hand without severely upending the flow of the game in some way.

On the other hand, this is also an excellent way to blast someone out of the game. If someone has a particularly large graveyard, it's possible to deal lethal damage with Eldritch Pact. That makes this a fascinating double-edged sword for graveyard decks, who could draw the most cards but also lose much more life. 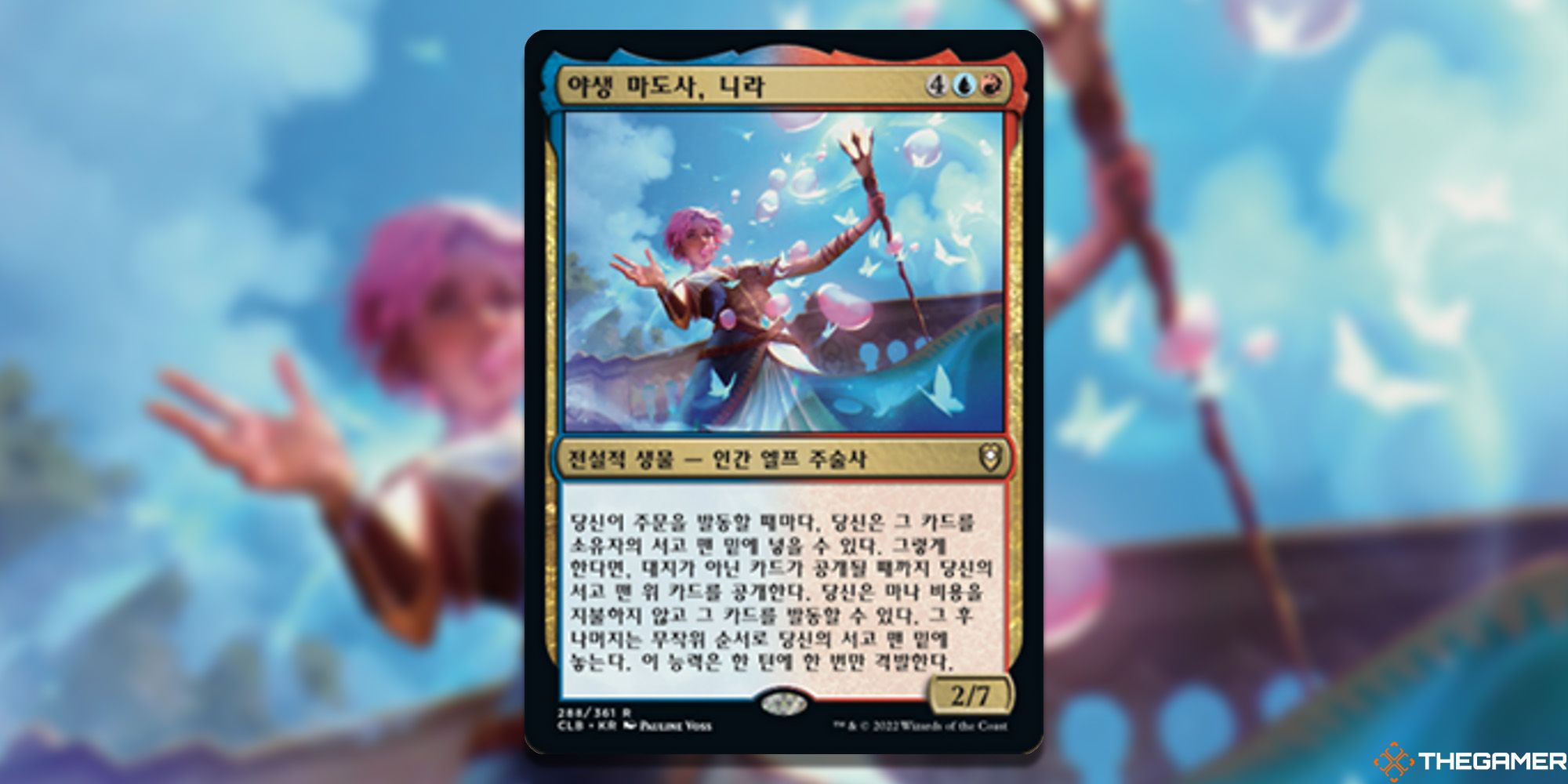 The final non-Background commander of the set is the chaotic Neera, Wild Magus. Despite being Izzet (red/blue), it's surprising how similar it feels to one of Strixhaven's scariest commanders; Jadzi, Oracle of Arcavios. Both allow you to cast spells off the top of your library, but Neera can do it for free off of any spell – a terrifying upgrade only slightly offset by the once-per-turn limitation.

Like Jadzi, your most efficient line of play with Neera will be manipulating your deck through cards like Opt and The Reality Chip until you can hit an Enter the Infinite and cast it for free. From there, it's simply a matter of playing Thassa's Oracle and winning the game.

Of course, another benefit of Neera is that she can cast any nonland card she hits, which includes powerful creatures or enchantments. Who needs to Enter the Infinite when you can drop an Ulamog, the Ceaseless Hunger and Omniscience for free? 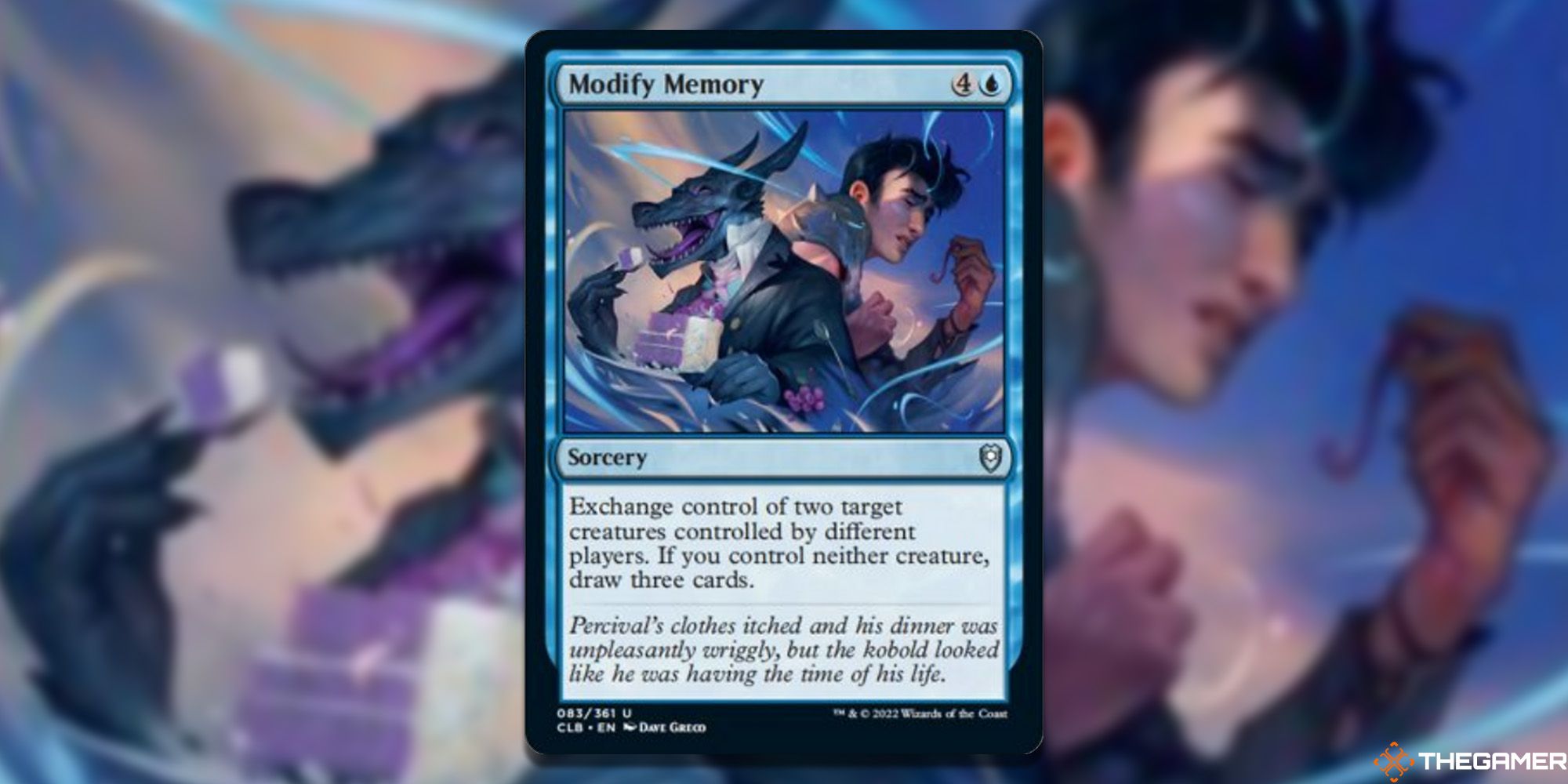 We've had a lot of cards in recent sets that allow you to steal other players' creatures, but very few that let you return the favour and give something back. We've seen even fewer effects that let you give other players' things to someone else, making Modify Memory very exciting.

The cool thing about Modify Memory is that you'll be getting value no matter how you use it. You can completely shut down many decks by yoinking their commander and giving them an Insect token, or you can steal a combo piece before it has the chance to go off. You could even give an opponent an Abyssal Persecutor, making it impossible for them to win unless they find a way to remove it.

Using this to shuffle your opponents' creatures around also gives you card draw as a nice cherry on top. This turns Modify Memory into a fun political piece: you could provide an ally with a powerful creature another player controls to earn their favour while removing blockers out of your way and gaining substantial card advantage. 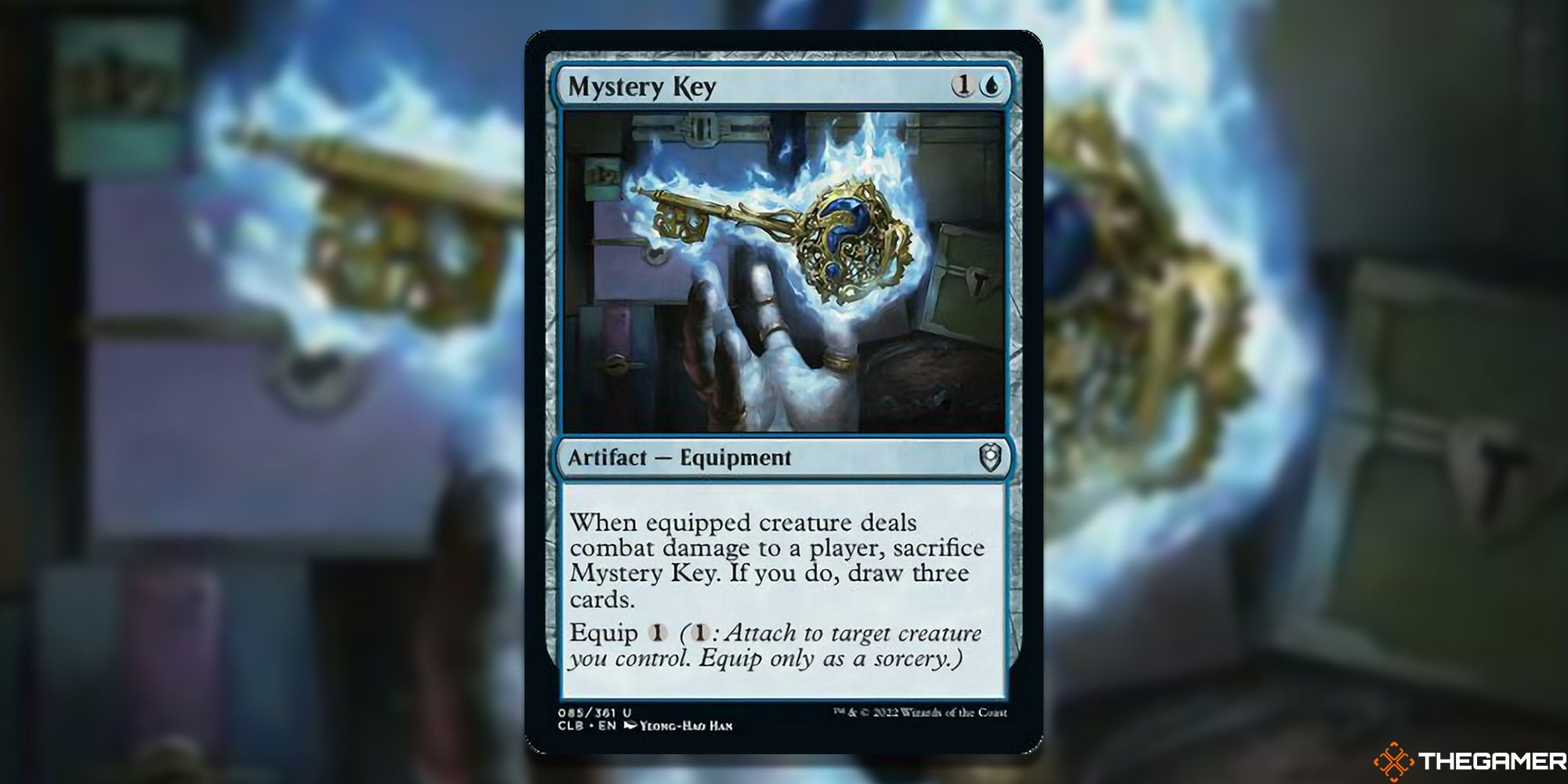 One generic, one blue artifact – Equipment:

When equipped creature deals combat damage to a player, sacrifice Mystery Key. If you do, draw three cards.

This unassuming little key is a lot better than it may first look. A card that needs you to get combat damage in for a one-off instance of card draw isn't anything to write home about, until you realise which commanders it will be absolute gas in.

Magic's recent sets have introduced a lot of ways to make unblockable creatures, such as the Fish tokens from New Capenna and Krydle of Baldur's Gate from Adventures in the Forgotten Realms. With all these new unblockable tools, getting the damage in needed to draw three cards is rudimentary.

Alternatively, as it's an artifact, it can also fit in numerous blue-using artifact commanders. Silas Renn and Emry, Lurker of the Loch are both is a particularly good choices for this, as you have a way to pull the key back out of your graveyard and keep drawing cards. Three cards in one go is good, repeated card advantage for the low cost of three mana and doing what your commander is meant to be doing anyway is incredible. 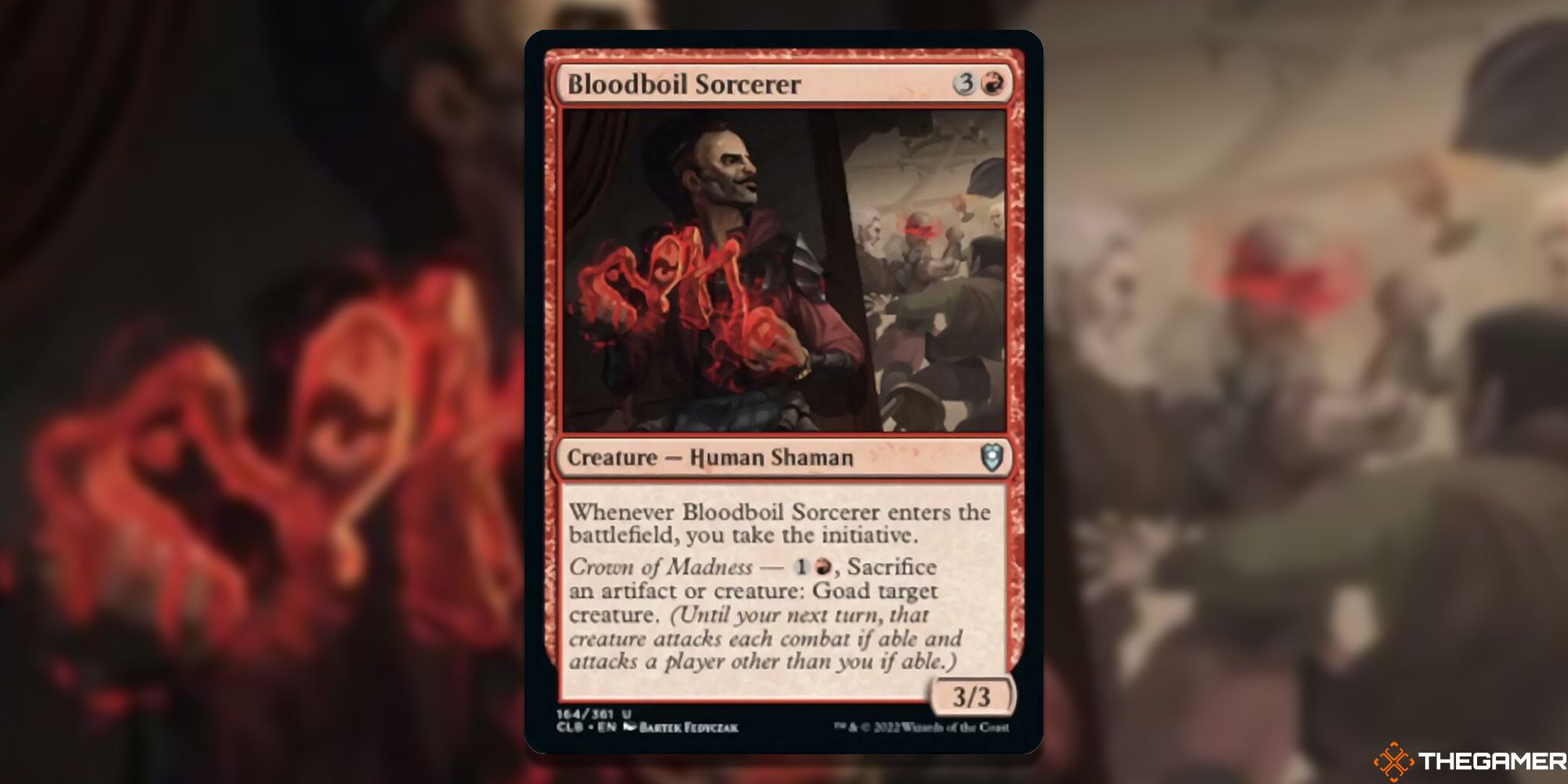 Whenever Bloodboil Sorcerer enters the battlefield, you take the initiative.

Crown of Madness – Pay one generic, one red, and sacrifice an artifact or creature: goad target creature.

There have been a lot of ways to take the initiative in Baldur's Gate, but very few of them have built-in ways to keep the initiative longer than a turn. Bloodboil Sorcerer's ability to do just that immediately shoots it into the upper echelons of initiative cards, while also being a powerful goad tool.

The idea with this card is to goad creatures who could feasibly take away your initiative, but we can have a lot more fun with it. Use it as a political tool to break up alliances and pacifist agreements between players, or pull yourself out of harm's way from a big, scary creature and point it at your opponents instead. Goad is generally a handy ability, and having it at instant speed with no limit on how many creatures you can goad is even better.

This also works as a good sacrifice outlet. It's not quite a Viscera Seer because you have to pay two mana for it, but in a pinch, it can be a good way to ensure you're getting all those death triggers off of cards like Juri, Master of the Revue; Korvold, Fae-Cursed King; or Havoc Jester.