High Isle is the new Elder Scrolls Online expansion, adding a whole new landmass dedicated entirely to the Bretons and their way of life. If you’ve played an ESO expansion, you’ll know what to expect – more story, more side quests, more NPCs, and familiar faces. But what’s really special about High Isle is the card game, Tales of Tribute. PvP in The Elder Scrolls Online is all about the now. You’re either thrust into a chaotic war against entire armies of players, besieging towns as you roll onto the next, taking fort after fort, or you’re plopped into an arena as an announcer eggs you on. It’s an action-packed frenzy. But High Isle lets you sit by the fireside, warming up with a few strangers over a game of cards.

The systems are pretty simple, even if the tutorial is dragged out and holds your hand for a moment too long. You have gold and power, cards that give you gold and power, and a point counter. Your power translates into points at the end of each turn, while gold can buy you cards from the hand in the middle. The aim is simple – get the most points. The complexity comes in how you spend your gold and use your totems. But it’s a tabletop experience through and through, not just a video game’s take on cards.

That realistic grounding of Tales of Tribute is what makes it feel so at home in ESO. The games’ PvP has always been baked into the story, whether it’s the ongoing bloody feud at the heart of Tamriel or even the arcade-y arenas that are little more than a Daedra’s pastime. But cards go another step, giving weary adventurers something to do in their downtime. It looks closer at the intimate moments of ESO’s world, the quieter breaks between the unending invasions from Daedra, warring alliances, and even strangers from faraway lands. It lets us get cosy by the fire, enjoying a night at the inn before returning to your quest. 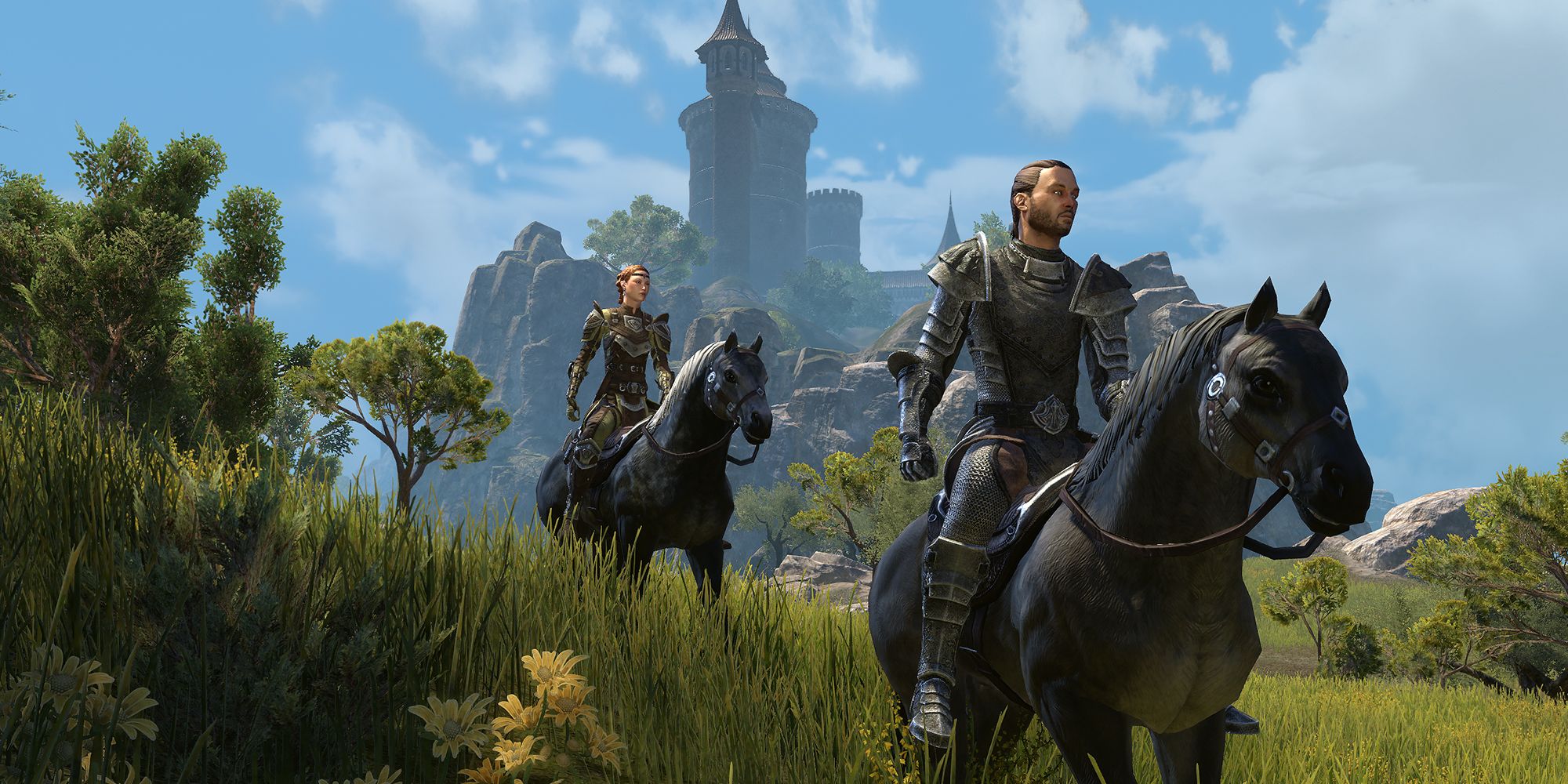 If you really want to get dedicated to the craft and go pro, you can dive into ranked tournaments and earn some of the best rewards in the game. This openness to your level of dedication is what makes Tales of Tribute so special. If you’re not putting your blood, sweat, and tears into Cyrodiil, it can often feel like a waste of time. You’re doddering about endless fields, joining in the occasional raid, but you’re not the champion – you’re another cog in the wheel of war. Whereas with Tales of Tribute, you can enjoy a PvE story at a steady pace, fight random players on your level when the mood strikes, or put your all into it and become the number one card slinger around.

It’s not about getting the most powerful deck, optimising a build, or anything that intensive, and that’s perfect for ESO, a game that’s finally found its identity and carved out its own niche in the MMO zeitgeist. Back in 2014 when the game launched, ESO was the ugly duck among the flock. It was obtuse, empty, and a hollow shell of the series it drew from. But High Isle shows just how far it has come. The past few expansions have introduced some novel ideas that feel more at home for an Elder Scrolls game than an MMO, like being able to go on treasure hunts for a guild, unearthing rare artefacts all over Tamriel. It isn’t competitive, it’s not about dungeons and monsters and questing. It’s about exploration and soaking in the world.

Tales of Tribute similarly embraces that intimacy of getting to know Tamriel, and it makes ESO all the better. It’s certainly the standout for this expansion. But a new card game isn’t all that High Isle has to offer. Like any expansion, there’s a whole new story, a whole new landmass to explore, and a whole lot of side quests. High Isle itself is a nice break from the unending Daedric invasions which have become ESO’s motif over the years – it’s more Oblivion than Oblivion at this point – because it’s similarly about the smaller, quieter moments. You’re unearthing conspiracies, political conflict, and personal drama. The Bretons are the focus and there isn’t a Prince pulling the strings for a change. 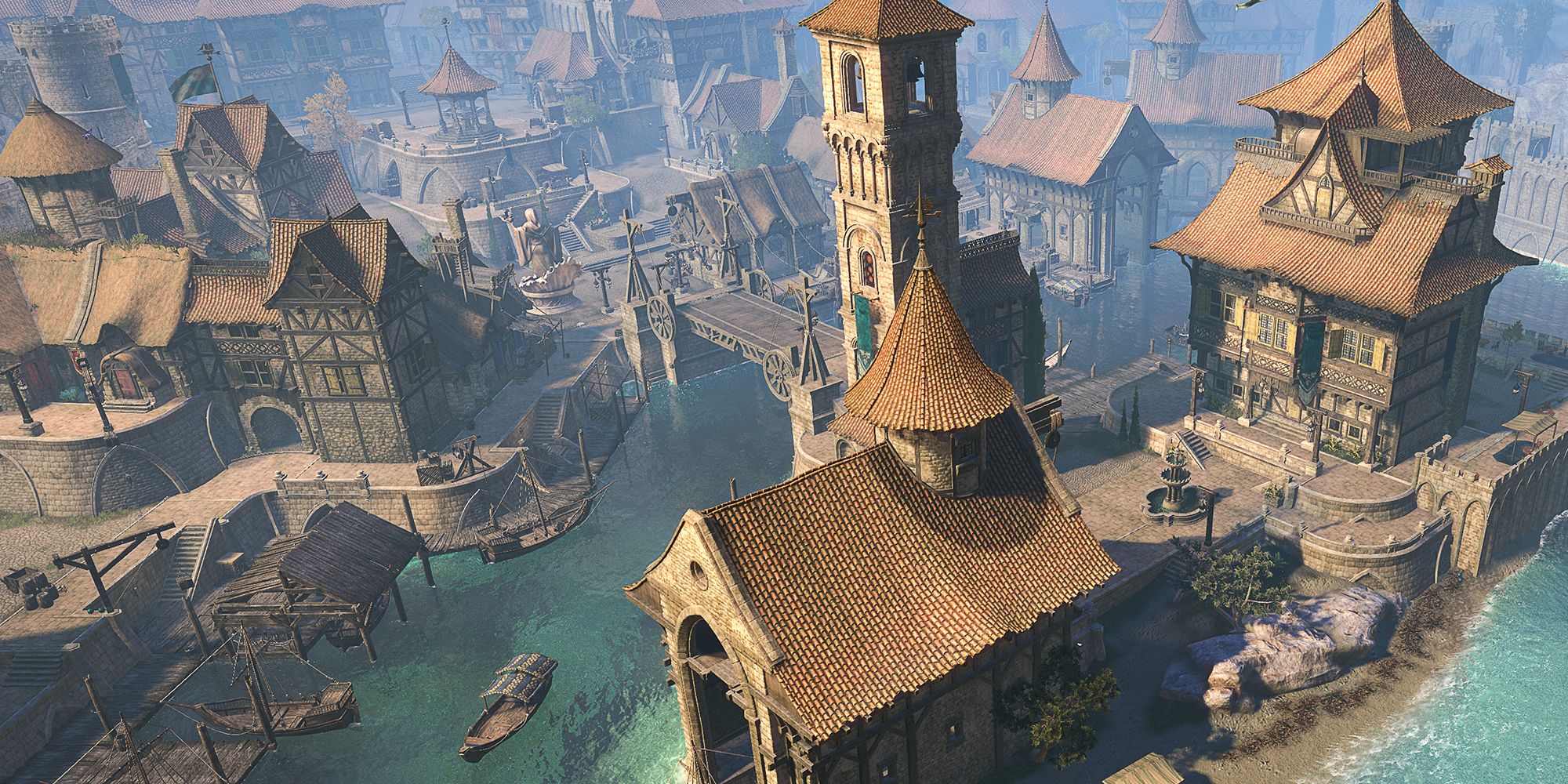 Yet it feels similar. Right from the start, I felt like I’d booted up Summerset Isles again. There’s that clash in Summerset between the High Elves and their ruling class, the spite toward opening up the border to outsiders who want to treat their home like a holiday destination, and that’s certainly an interesting angle. High Isle feels like that without the conflict between the locals and the tourists.

Summerset had that hook that made visiting feel almost dirty, like you’d been invited over to someone’s home while their roommate glared at you from the sofa, quietly chomping on some cheese puffs. High Isle is more like taking a day trip to the local swimming pool. The real pull, the thing that I’m most excited to dig deeper into, is the prison island, The Elder Scrolls’ very own Alcatraz. It’s been conspicuously built right by the resort, which is an interesting parallel to our own world, drawing from more contemporary examples as well as older ones like Britain’s treatment of Australia, merging them to create something new and distinctly Elder Scrolls. That’s what gives this expansion a unique edge, even if there’s that rampant deja vu.

But if you weren’t sold on ESO, this isn’t the expansion to change your mind. This isn’t going to be what breaks the threshold and reels you in. It’s more ESO. Tales of Tribute is the standout, a whole new mechanic and game that’s been introduced and stretched back to the very beginning in 2014, and that’ll help keep things from going stale. Ultimately, that’s what this expansion looks to be doing best – keeping existing players going. There’s a whole new set of islands to explore that are building on the Breton mythos like never before, while the card game offers something new to do, something different, but the main bulk of the expansion – the story-driven island – is simply more ESO.