One of The Forgotten City's many citizens, Rufius, is at the heart of quite a few of the quests you'll have to go on. One of these questlines is called "A Thorn In The Paw" and has you trying to find a cure for Rheumatism, something that Rufius is suffering from.

One key reason for curing Rufius of his Rheumatism, besides being a good citizen, is that it'll get him to vote for Galerius in the Magistrates vote, which will gain you one of the plaques you need for the final ending. You'll also need to complete this quest in order to finish the "The Sinner" questline. 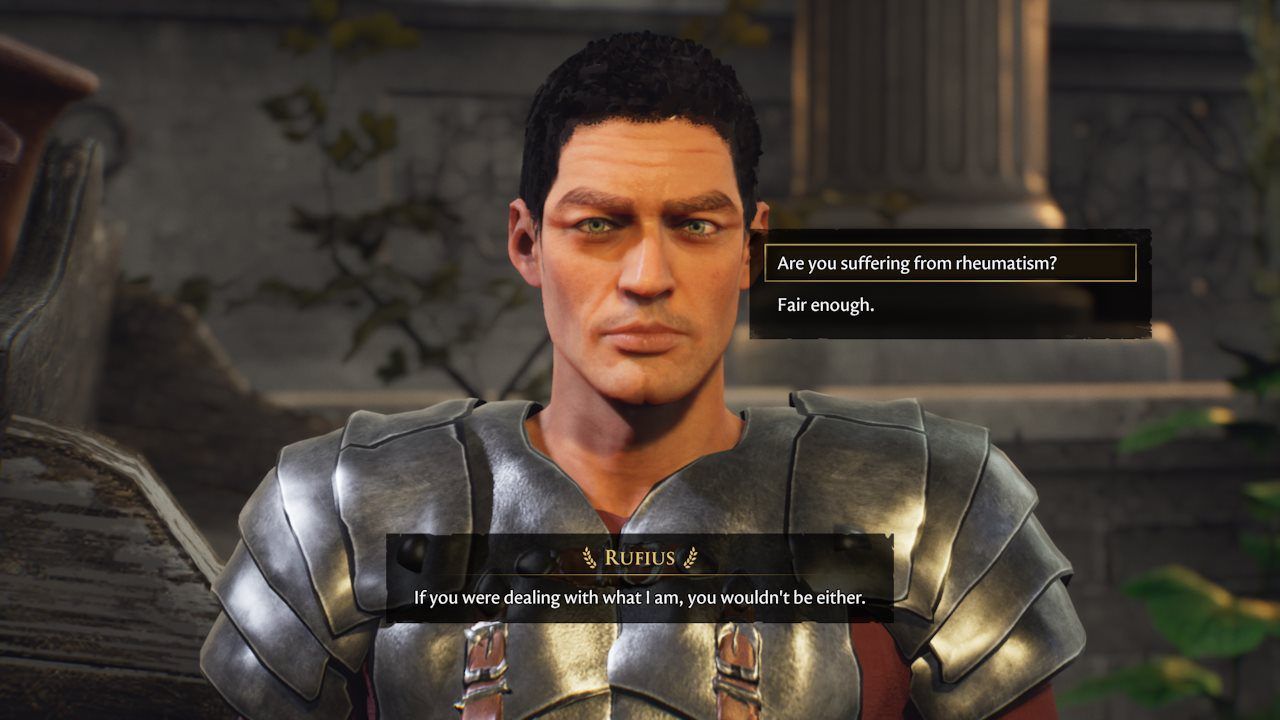 As is the case with a lot of The Forgotten City's quests, A Thorn In The Paw is linked to several other quests in the game. In this case, you'll need to get rid of the assassin and complete "The Gilding" and "Behind Closed Doors" in order to find the cure for Rheumatism.

To start this quest you'll need to talk to Lucretia. You'll likely do this as part of an early-game quest where you need to find Silphium Resin to save a life. Lucretia will mention that one of her patients has Rheumatism and that she doesn't know the cure for it, but that Naevia does. Naevia has locked herself in the palace, which is part of the "Behind Closed Doors" questline.

How To Find The Cure For Rheumatism In The Forgotten City 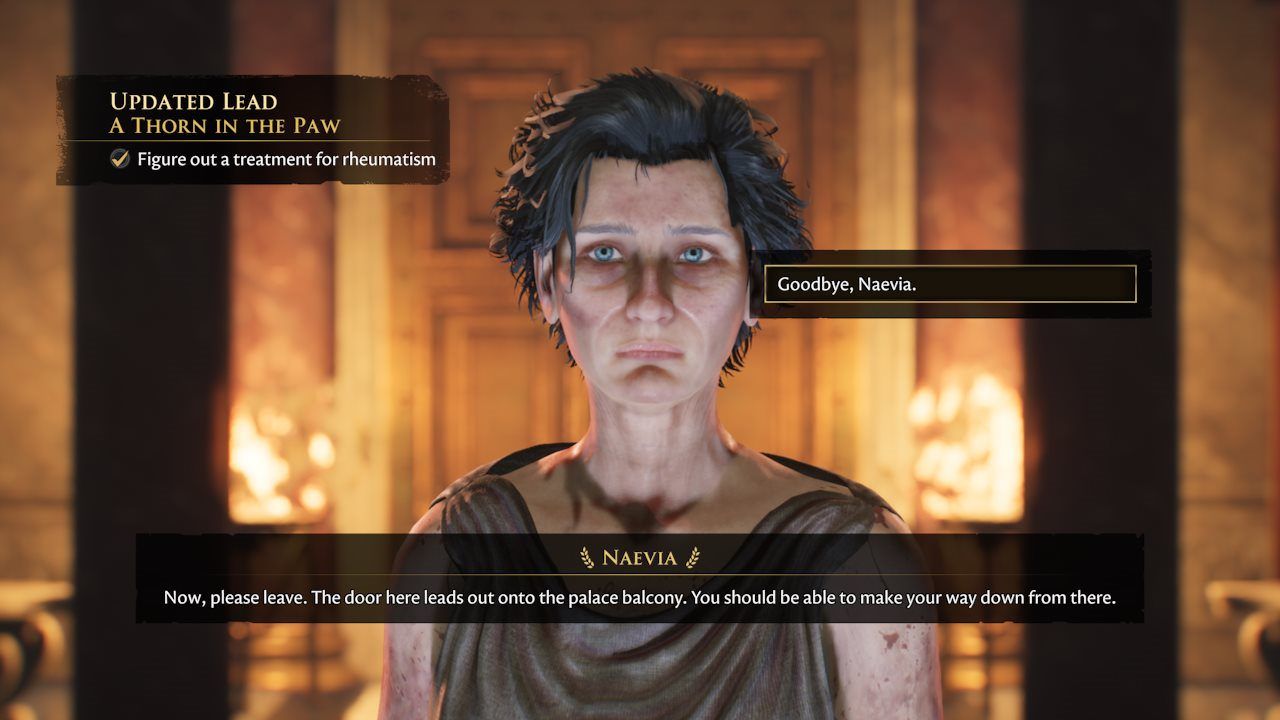 If this is starting to sound familiar, that's because "Behind Closed Doors" is linked to "The Gilding", which is linked straight back to "A Thorn In The Paw". Luckily, we've guided each of these steps already, so no matter where you are in the questline, we've got you covered.

To get to Naevia you need to get rid of the assassin to get his bow, talk to Desius to get the golden bow, make your way through the palace and its peeled statues, and talk to Naevia. When you talk to Naevia you're given the chance to ask about Rheumatism. She'll give you the cure if you shoot the peeled statue and turn it back into gold. 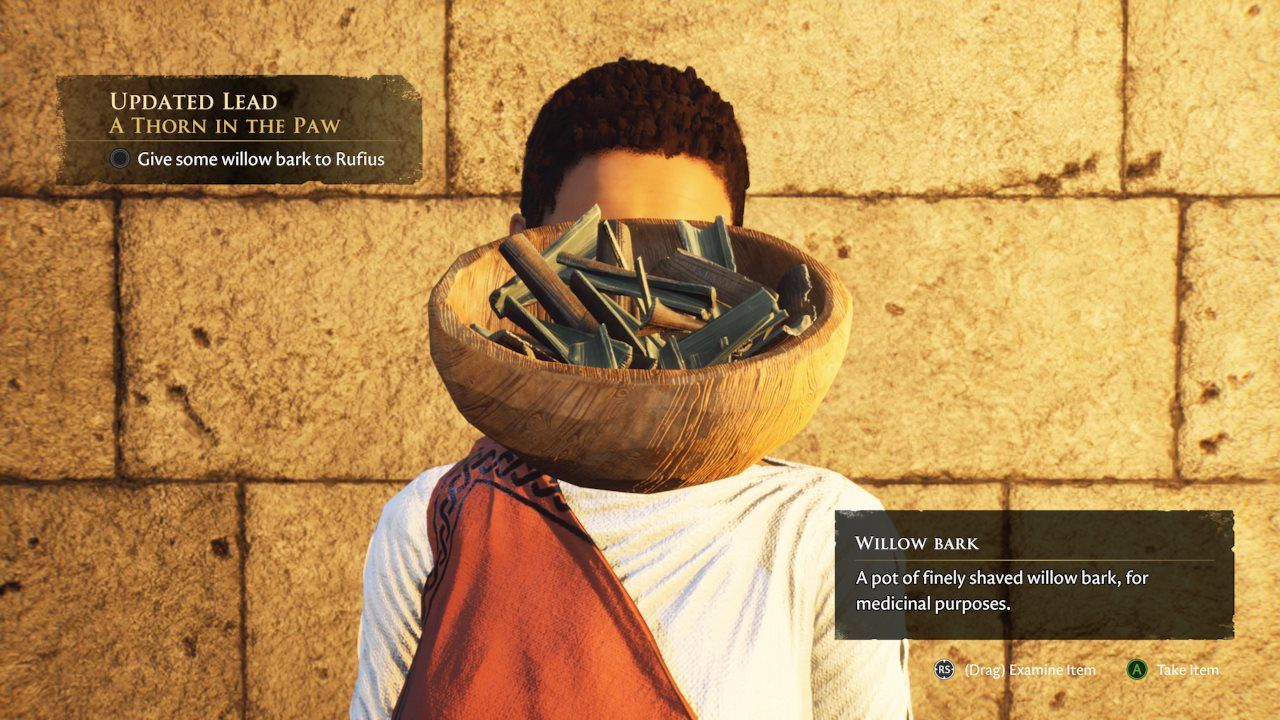 After you're given the cure, all you need to do is go to Lucretia and tell her that you've figured it out. You can tell her that it's Willow Bark and she'll give some to you to give to Rufius. Give it to him to finish the questline off and make him more malleable for when you talk to him about "The Sinner" quest.

Whenever you loop time from now on, you can tell Galerius to give the Willow Bark to Rufius, rather than having to do it all yourself. 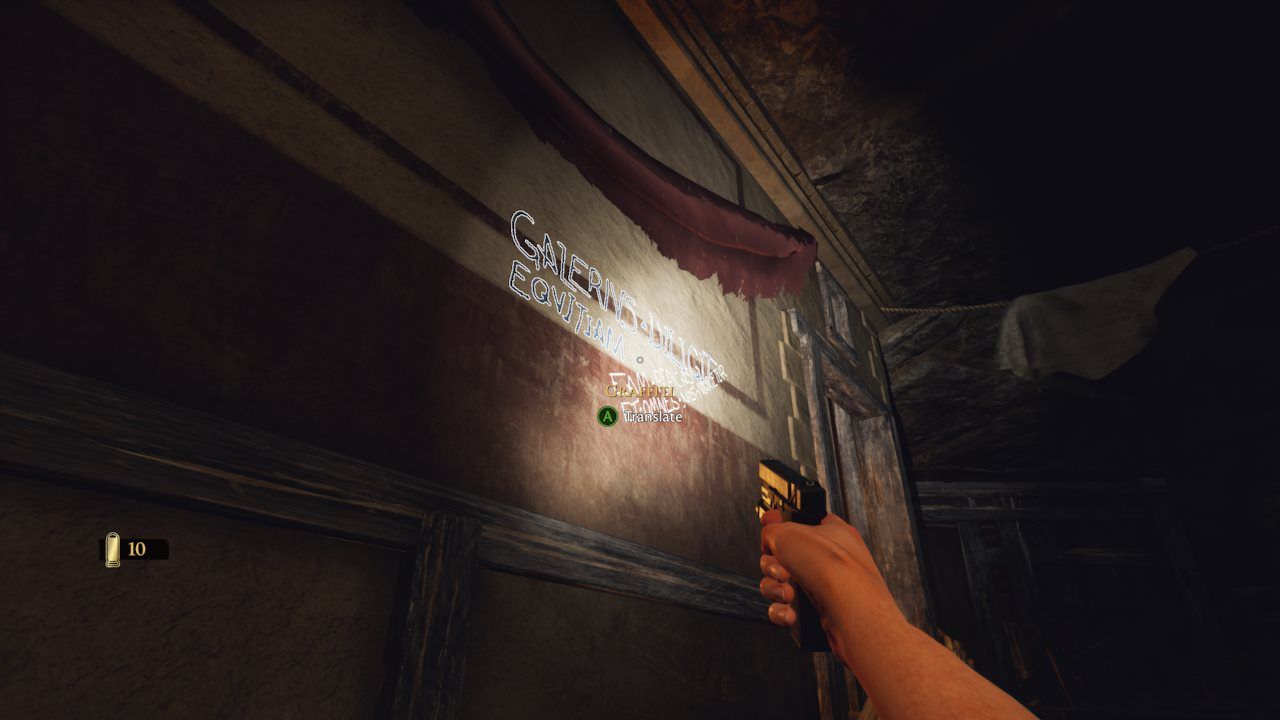 Before starting "The Gilding", The Forgotten City will tell you that you don't have to do the mission if you don't want any horror or combat. Well, if the cure for Rheumatism is only found by getting into the palace, how can you find it without playing that mission? 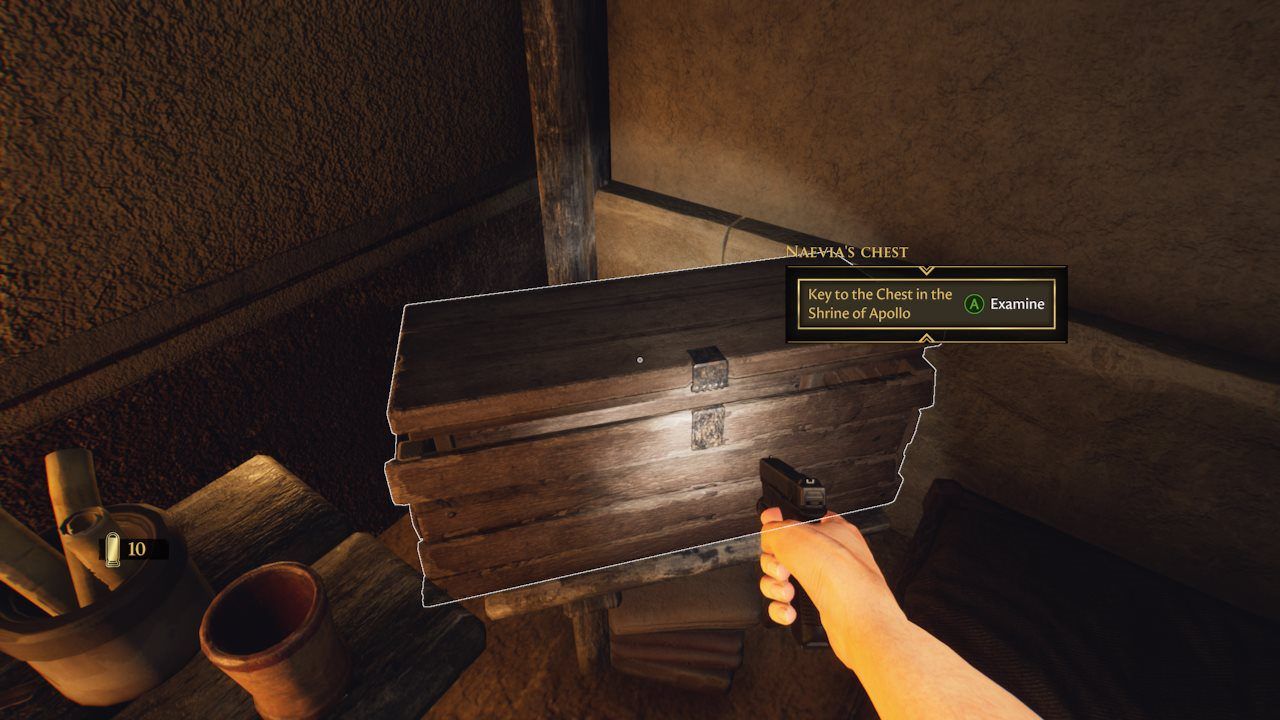 Luckily, there's another way, one that's actually a lot quicker than the intended path with the golden bow and horrible statues. Head over to where everyone's rooms are located and head up the stairs opposite the tavern. You'll know it as it has graffiti on it as you walk up. The first room on the left will lead you into Naevia's room. 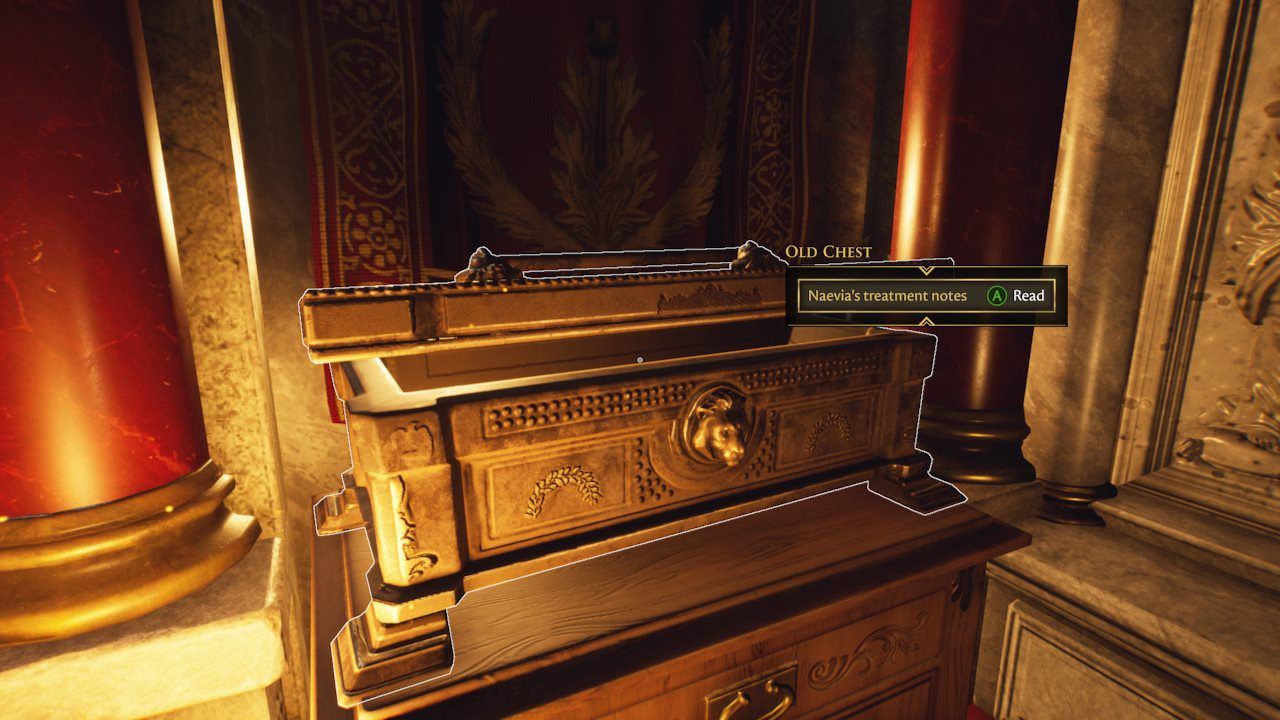 Go into her chest to find a key that'll unlock another chest in Apollo's chamber, which is where Lucretia works. Find the old chest right next to the door and use the key to find research notes that contain the cure for Rheumatism. Show it to Lucretia to be given Willow Bark and end the quest much faster.