The opening hour or so of most games is fairly easy. They teach you the controls and mechanics of the game while providing you with easy obstacles to overcome. It's a nice way to settle into an adventure. This is not what The Knight Witch does, though.

The Metroidvania game throws you into the deep end early. Yes, you have a little spell at the start that isn't too difficult. But then, after a short period, it pits you against the first boss, Emperor Erebus. He's not the hardest foe in the game, but he's a significant challenge for someone still getting to grips with the game. If you're one of his victims, this guide will make it easier to beat him. 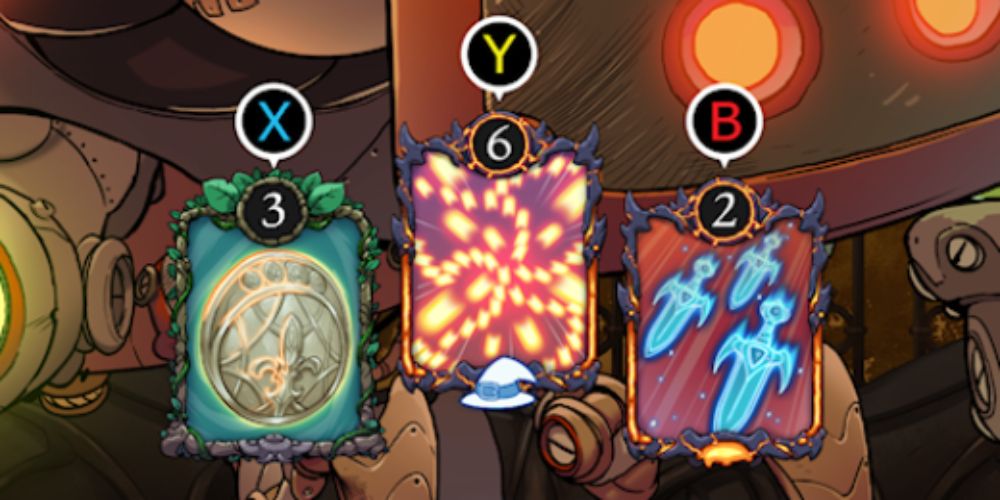 Before getting into the actual battle, it's good for you to know what spell cards you have at your disposal. In the bottom right corner of your screen, you will see that you have a choice of three. When you use one, your deck of six gets reshuffled.

At this point, the game doesn't tell you what each of them does. Therefore, it can be hard to know when to use what. So, here's all the information:

While you have a deck of six, there are only five unique cards, as you have two Triple Seeking Swords.

There are all useful for this fight, particularly the Hand Cannon. Thus, when you've got the mana, make sure you use some.

You need mana to use cards. So, keep your stock of it up by collecting the little blue balls that the boss drops. 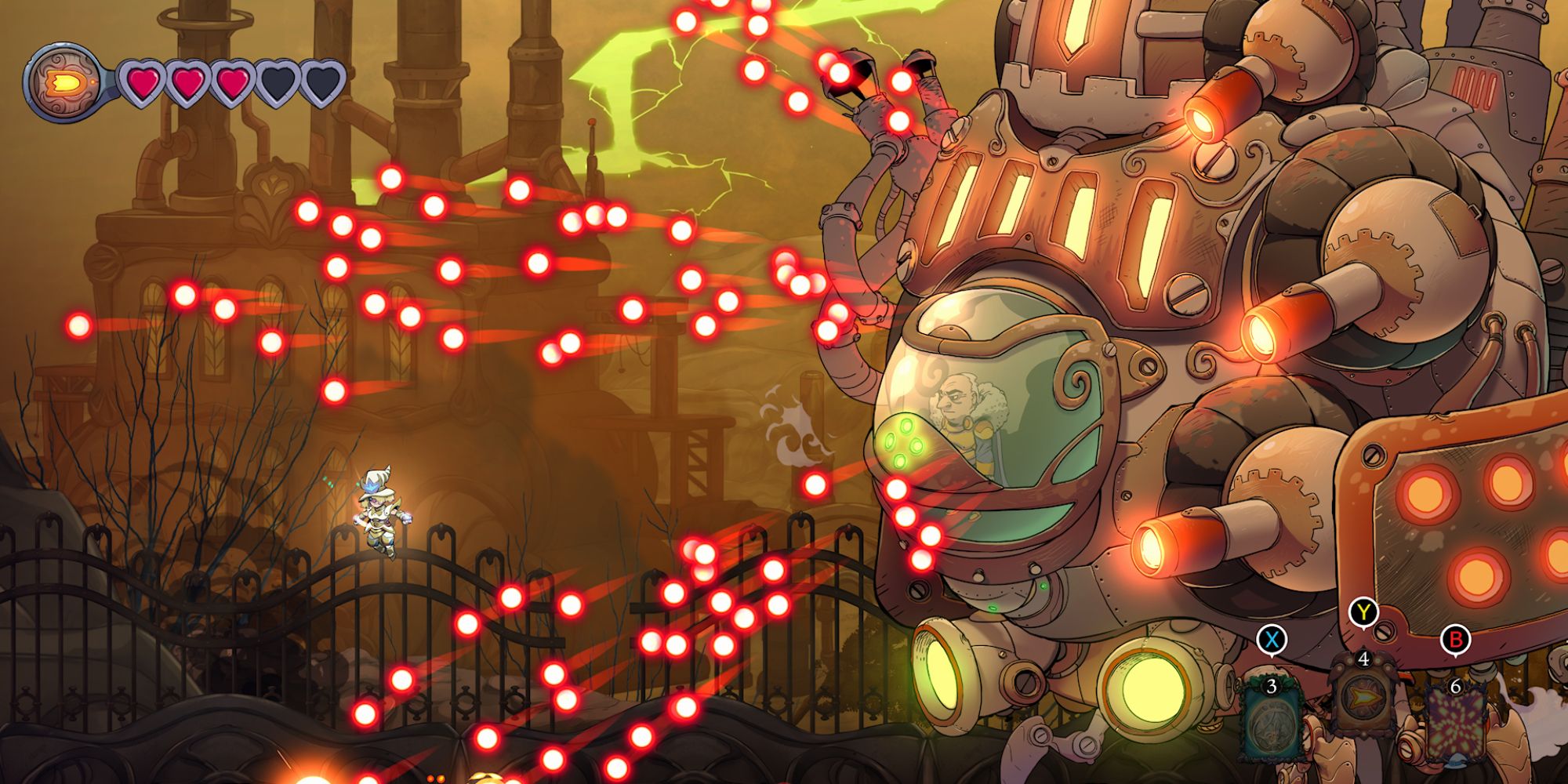 When the battle starts, Emperor Erebus isn't the only threat. He also has a bunch of allies around. Dodging their and the boss's attacks is very difficult, so take them out as soon as possible.

To do so, either use the Armageddon card if you have it or use auto-aim (shooting without holding a direction).

Once they're gone, you can focus on the first phase of the boss battle. In this section of the duel, the Emperor has three different types of attack:

Unsurprisingly, these are the easiest attacks to dodge in the fight. Each one is fairly slow, and there are gaps in them. Therefore, just making sure you're level with the gaps as they come towards you will keep you safe – you may need to back up a bit for the first attack.

While the bullets are flying past you, you should be manually shooting at the boss's machine (manual fire does more damage than auto-aim). There's no real weak spot to aim at – just shoot the canopy where the Emporer is sitting. 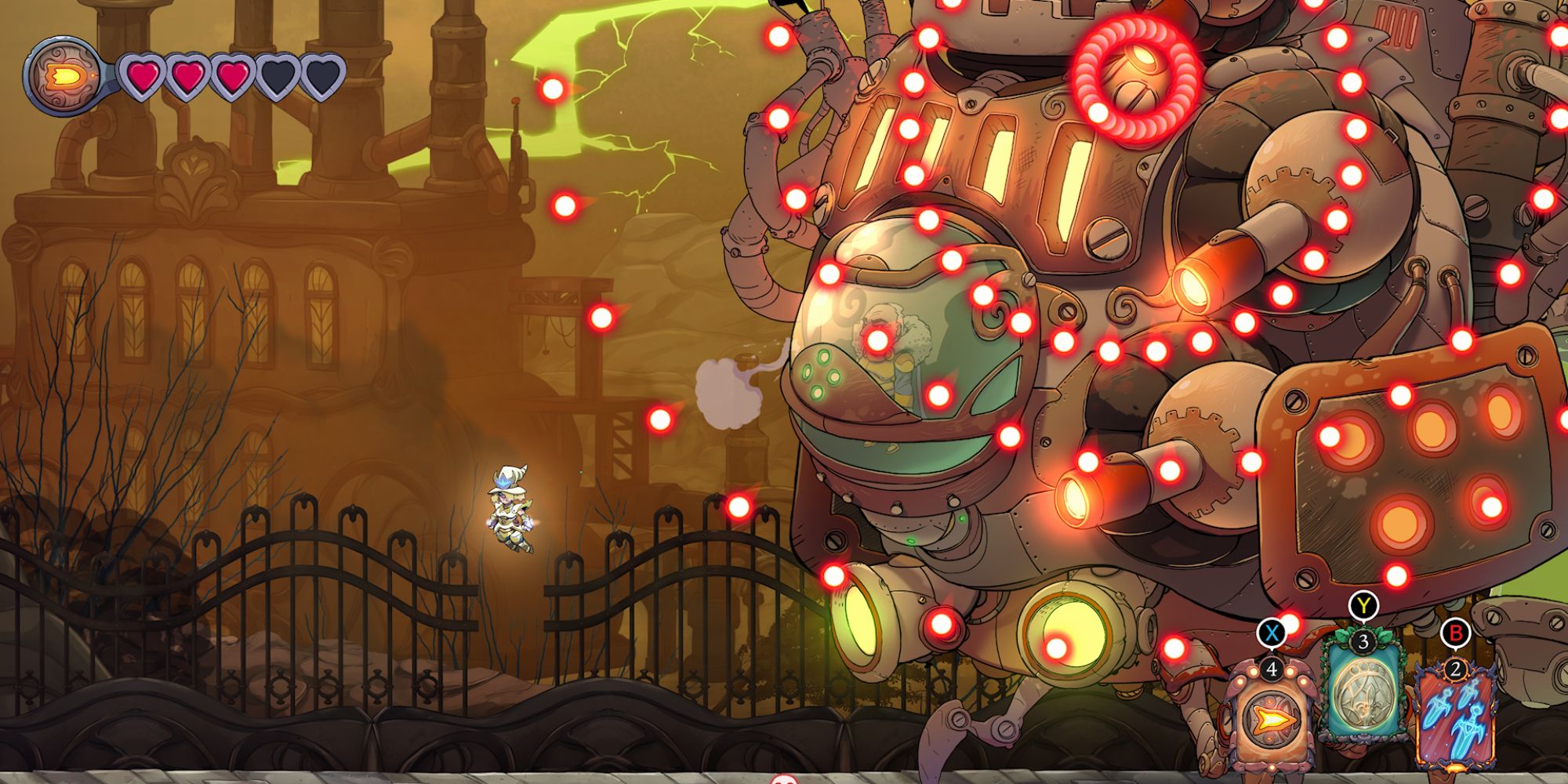 When you've done a bit of damage to the boss, phase two begins. There is no cutscene or anything to insinuate a change of phase – the Emperor just starts unleashing different moves.

This period of the fight is trickier than the first because the boss's attacks overlap more often. These are the things he does:

You really need to watch what's coming your way in this phase, as it can be hard to dodge everything.

Attack One comes at you quickly and heads directly in your direction. Therefore, it's best to keep moving and float over or under the bullets. It's a little easier to avoid Attack Two, as there is a giant gap between the sets of bullets. As for the circle, it comes at you slowly. Thus, you have time to back up and go through the open spaces.

When all of them are firing at once, you may need to use the game's dash function to remain unscathed. This allows you to teleport forward in the direction you indicate. So, if there is a line of bullets in front of you, you can dash to the other side of it.

At this point in the adventure, the game doesn't tell you how to perform the move. On Xbox, it's LB, while on PlayStation, it's L1. On those systems, it's the opposite of the fire button, which is likely the case on the Switch and PC versions.

While avoiding hits, you want to shoot the boss as much as possible. It can be hard to do both at the same time, though. If you're close enough to the antagonist, you can use auto-aim to hit them, allowing you to focus solely on dodging. 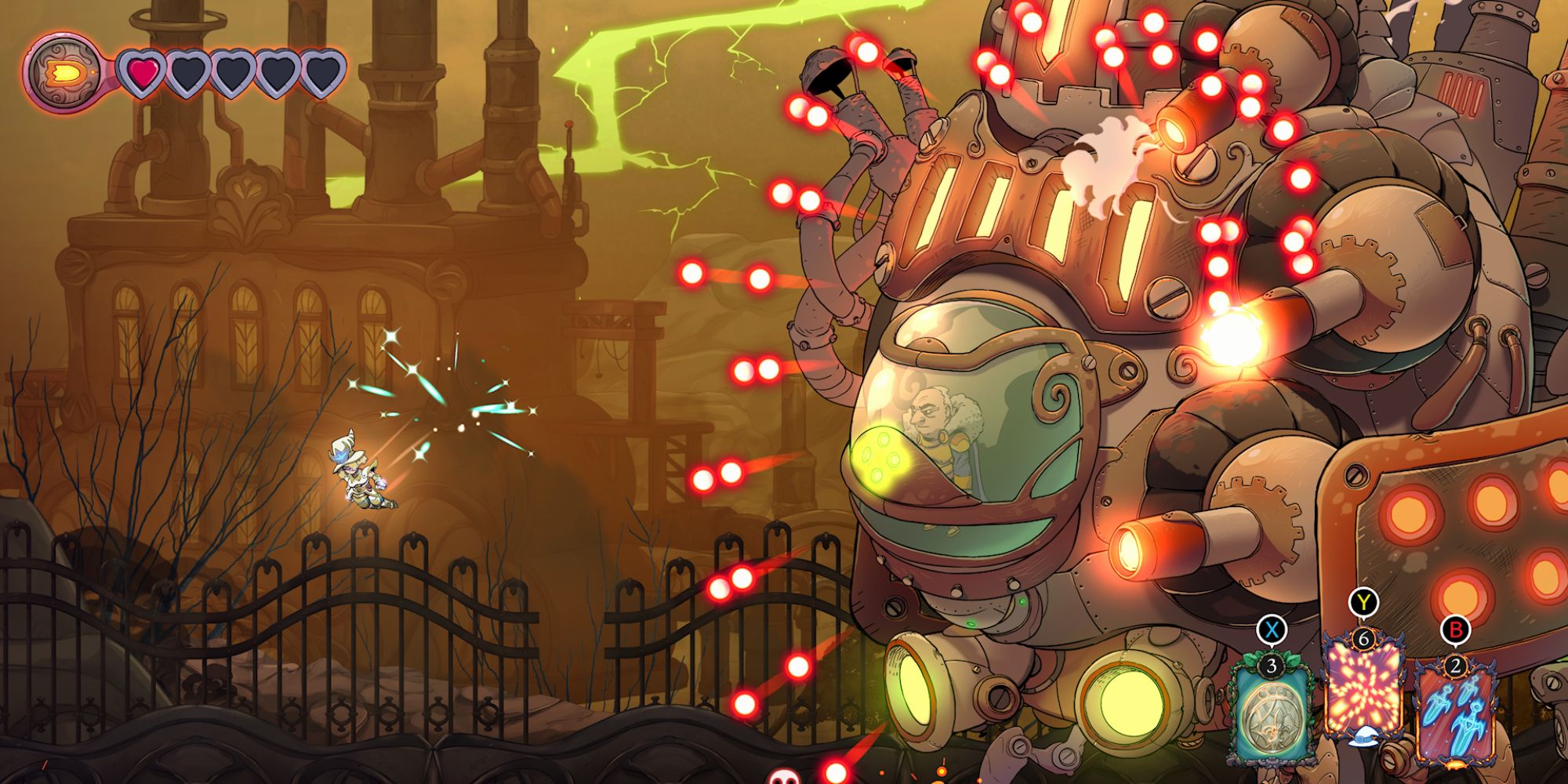 The final phase of the fight begins when the Emperor doesn't have much health left, and with it comes a new series of attacks. This is them:

Attacks One and Two of this phase are actually easier to avoid than those from phase two. After all, you just need to find the gaps between Attack One's bullets. For Attack Two, there always seem to be spaces on the screen you can go to avoid the slow-moving bullets.

Attack Three in this phase is the most dangerous as it's easy to get caught underneath the stream of bullets as it rises. In this situation, you must try to dash through it, but the thickness of the stream makes it difficult.

The best course of action is to wipe out the remainder of the boss's health quickly to limit how often he uses Attack Three.

So, make sure to keep firing at him, and use your spell cards to do significant damage. He won't have an abundance of health at this stage of the duel, so it shouldn't take long to finish him off.