This War Of Mine is a unique survival game. It's about making you feel the real-life struggles and hardships of trying to survive wartime. It's less about crafting weapons and raiding and more about trying to make peace with the times you had to steal from other survivors.

With such a bleak and somewhat realistic game about survival, you could think that all companions are welcome and valuable. However, some characters are just more desirable due to game mechanics and how hard it can be to keep your survivors well-fed and healthy. 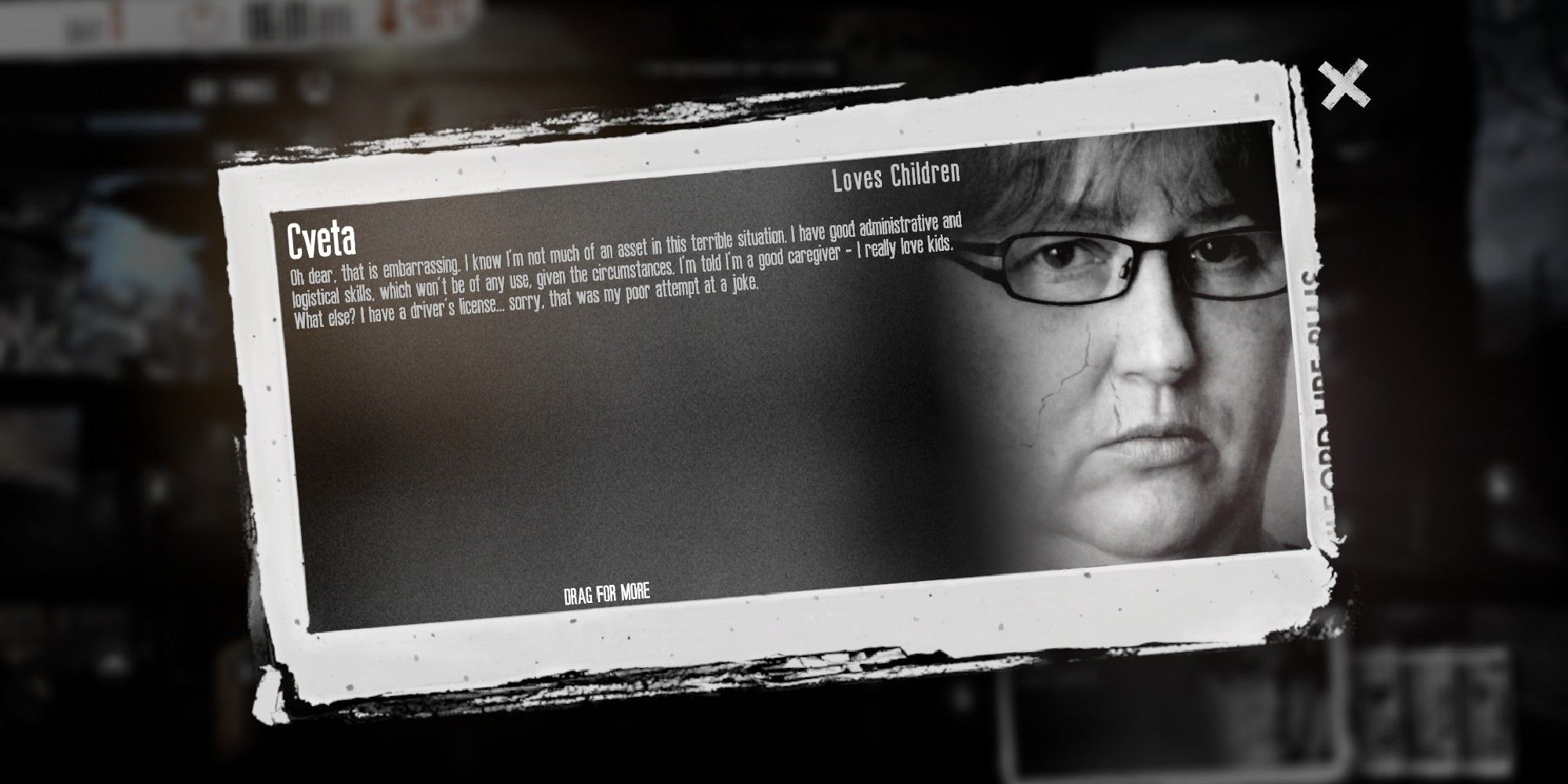 Cveta is a lovable, optimistic school principal, and that's about it. But, unfortunately, she is pretty much the worst in every important aspect. Her pitiful backpack size, the worst combat capability, and very situational trait put her solidly at the bottom of the pecking order.

Her ability to connect easier with children and boost morale might make her seem like a decent pick, but when things get rough, she becomes living proof that a positive attitude is not enough by itself. Especially in a warzone… 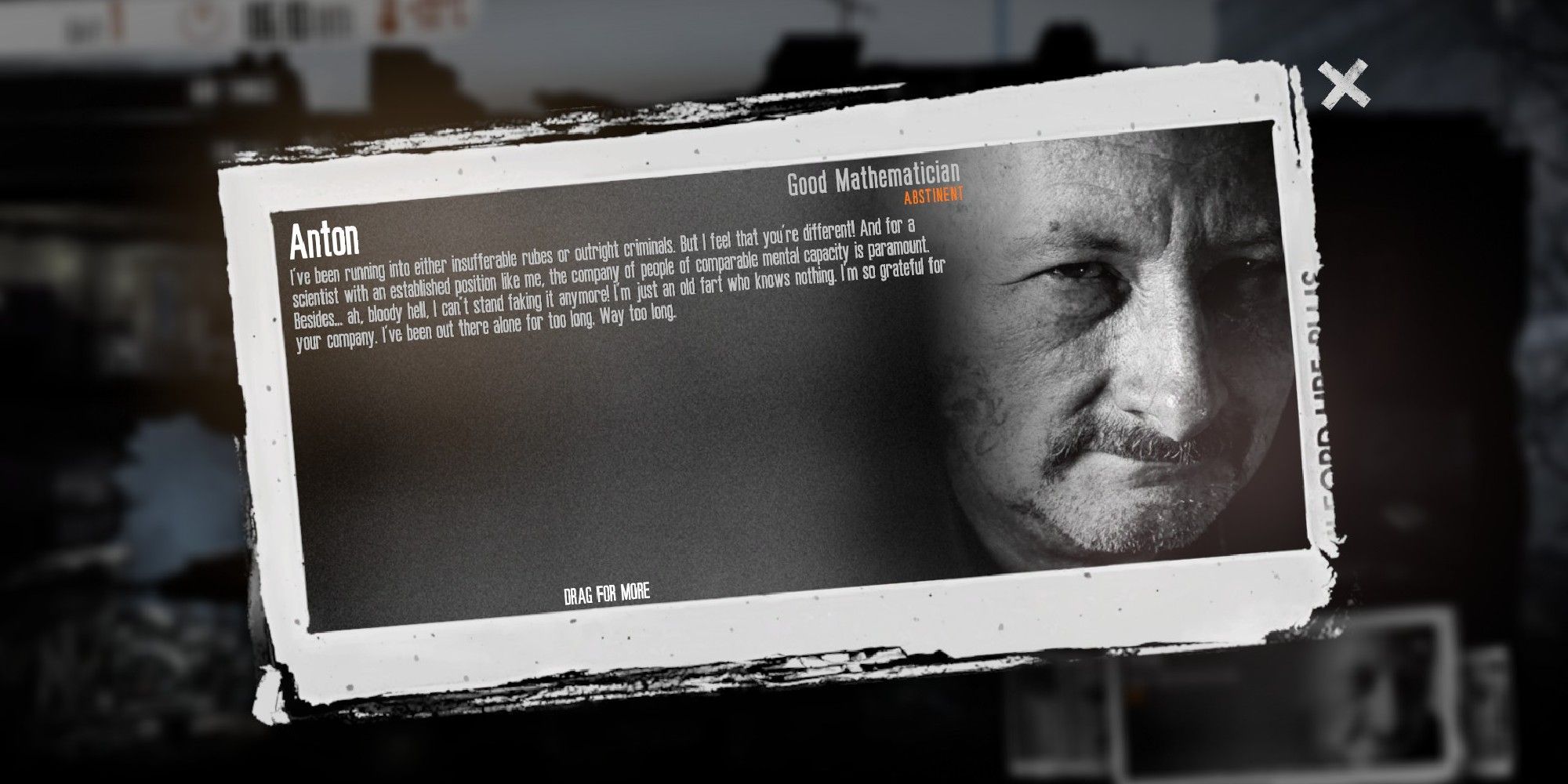 It almost feels wrong to rank the oldest character so low, but Anton just can't pull his weight, unlike some less realistic video game elderlies. He runs slow, doesn't boost the group's morale, and isn't great at combat either.

Sure, his ability to catch rats faster can be decent in a pinch, but it's rarely impactful enough. While it feels ruthless to say, an old mathematician isn't the greatest asset to a group of survivors in a warzone. 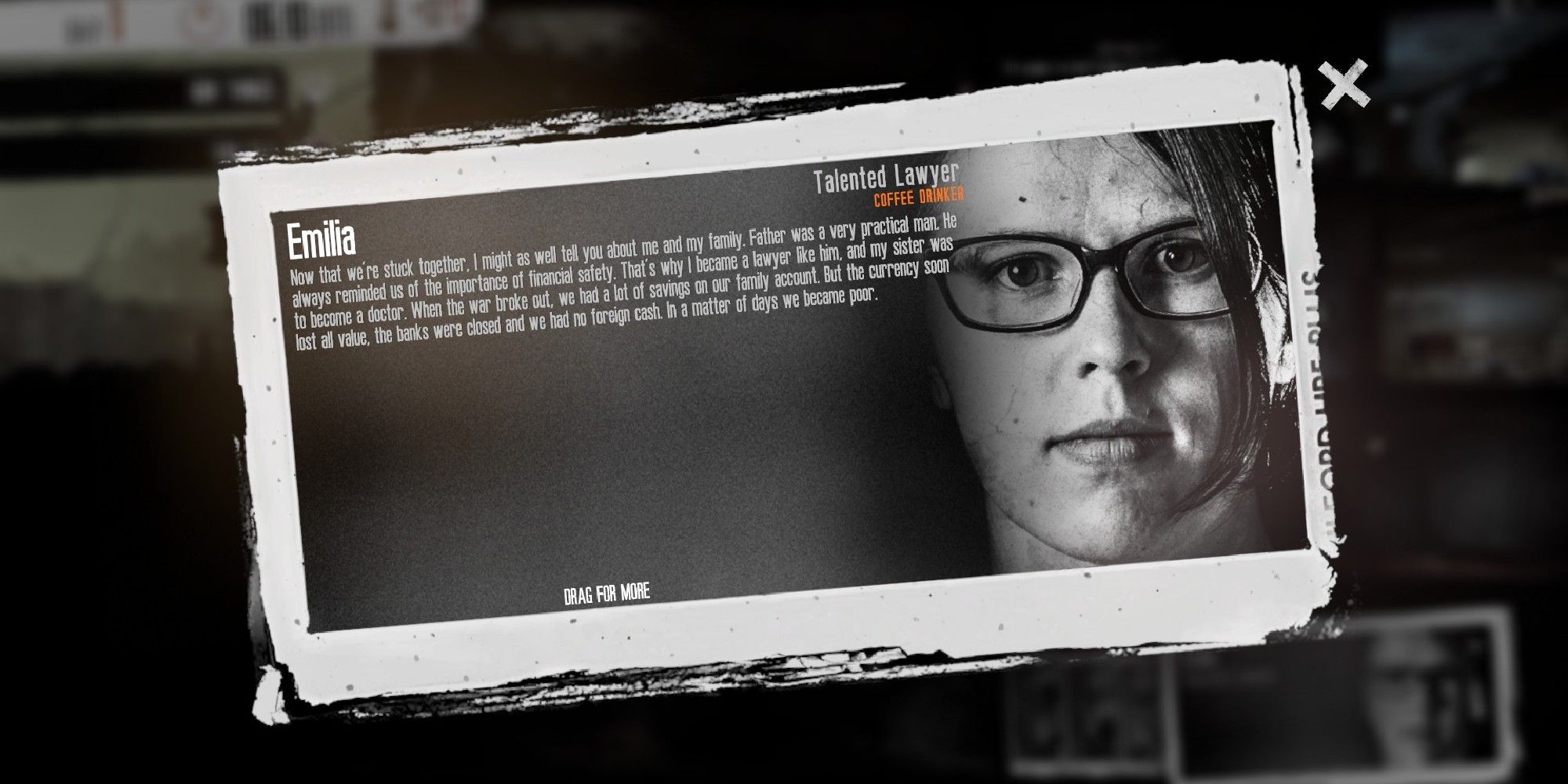 Emilia is the definition of mediocre. While in a game about survival and resource management, being a jack of all trades sounds great, Emilia is not a good example of this. She doesn't excel in any category and is average at best.

Her ability to overcome committing heinous acts can sometimes prove helpful, but in This War Of Mine, doing things that'll hurt the group morale should be a last resort anyway. Emilia, only being functional on such occasions, makes her less desirable than other survivors. 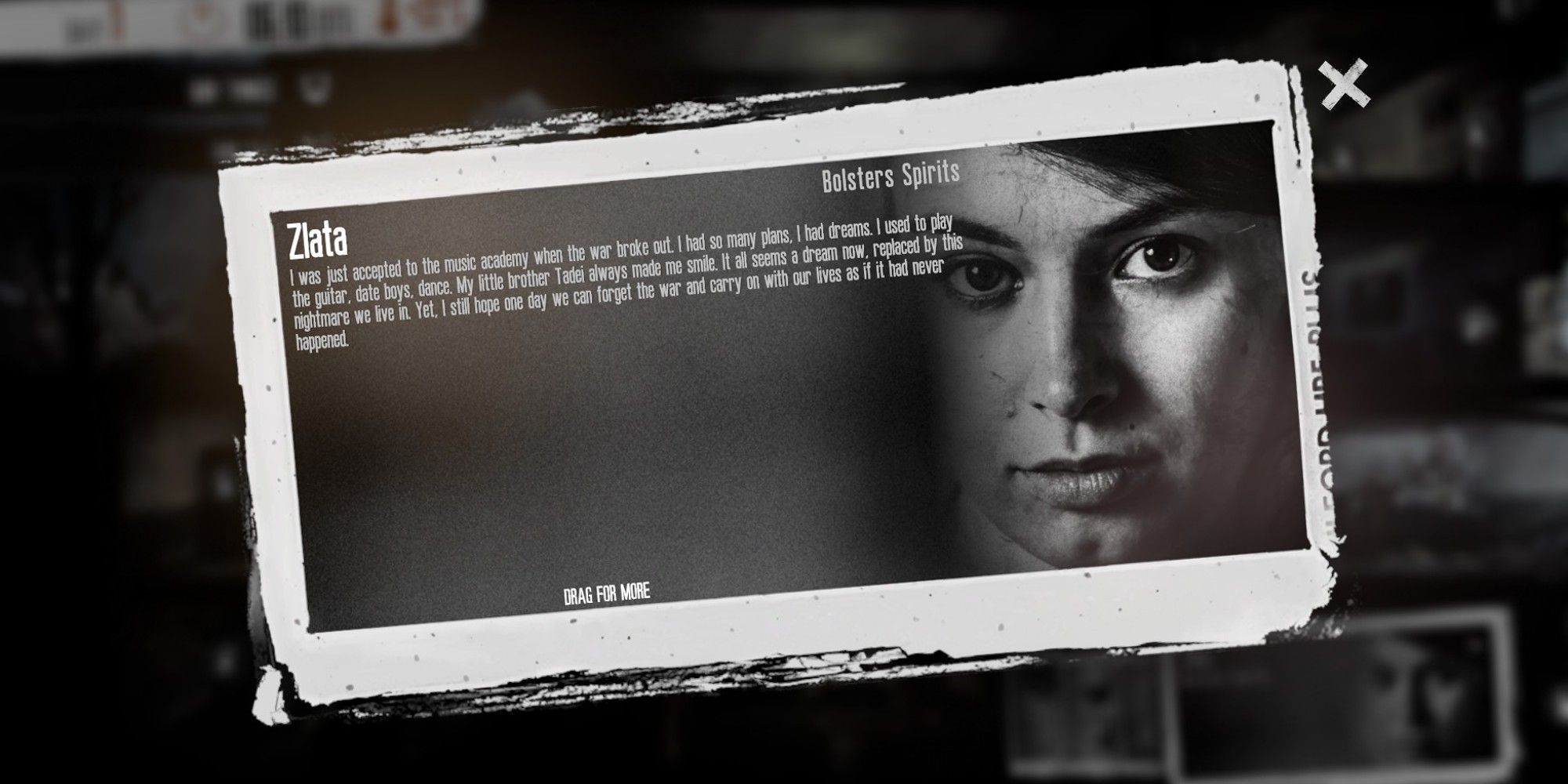 Zlata is another character that doesn't shine in a particular area. Her ability becomes invaluable when your shelter has very low morale, which it ideally should never be.

Her ability to play the guitar and console others is excellent on paper, but these are things that fix a problem that should never have occurred in the first place. This contradictory trait, combined with her below-average combat ability, leaves a lot to be desired. 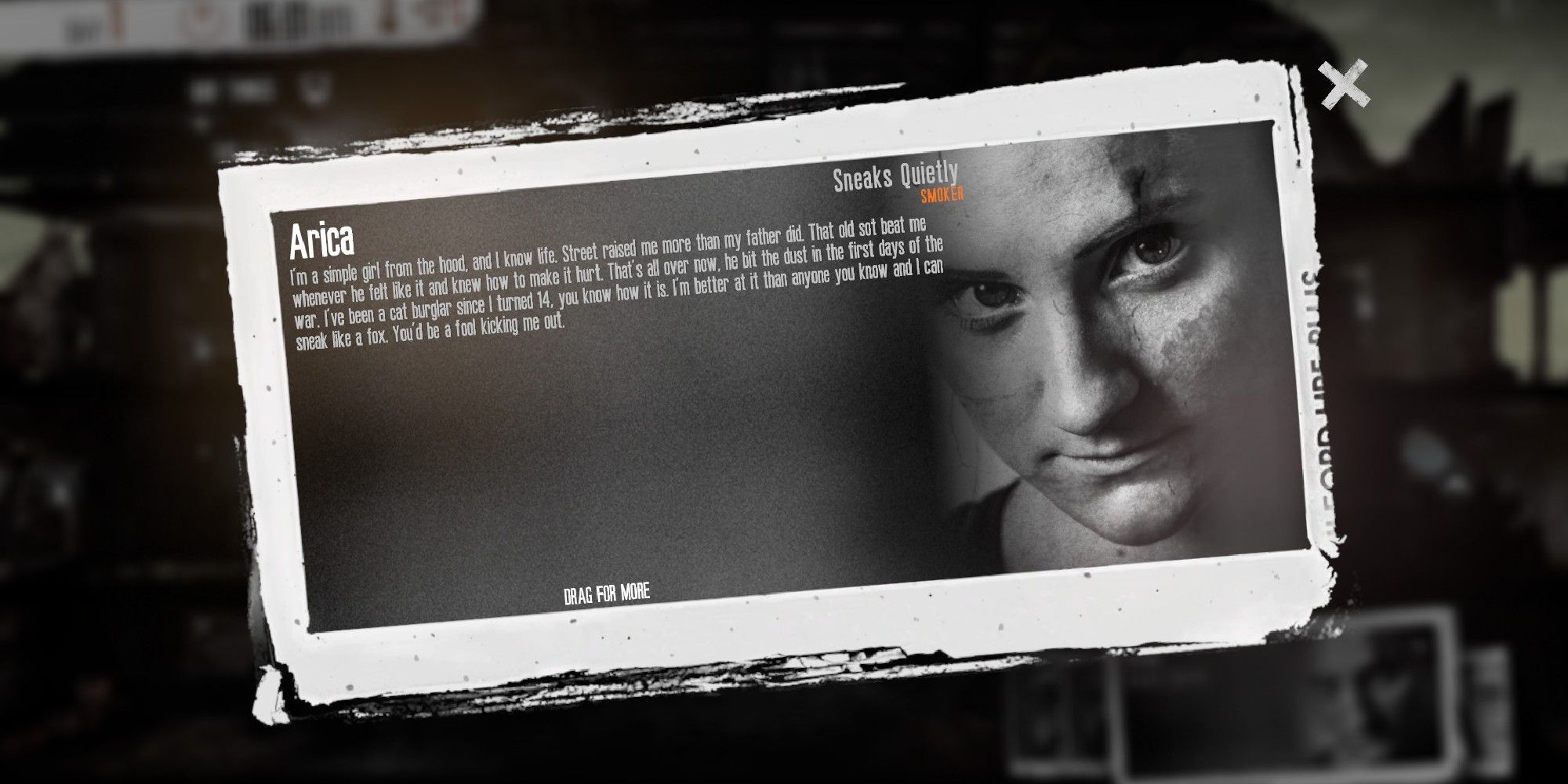 Now we're moving on to characters with at least something to offer to the group other than an optimistic attitude. Arica is a sneaky runner, the thief of the bunch, if you will. She makes less noise when running around and jumping compared to other survivors.

She also has a decent combat capability and can perform stealth takedowns. Her inventory space could be better, but she is a decent scavenger when the need arises. 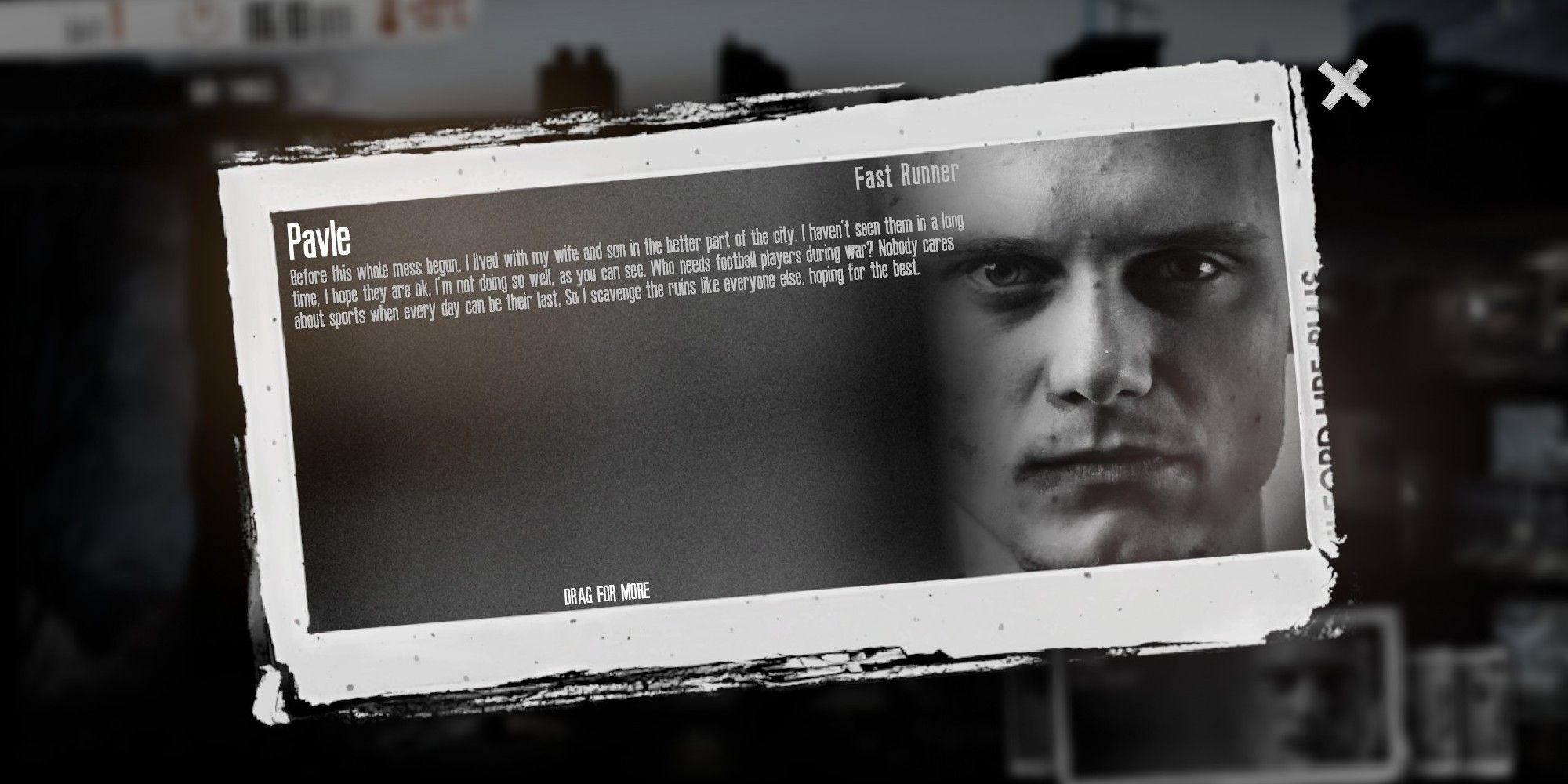 Here is another runner, proving that being fast is not enough in a warzone by itself. Pavle, however, has a few other things to offer as well. Being a star football player before the war, he can run at incredible speeds, even when he's injured.

He has a better backpack size than Arica and is also decent in combat. He also has no addictions, such as coffee and cigarettes, while also being able to play the guitar. Pavle would be a safe choice if only his greatest asset were a bit more practical at all times. 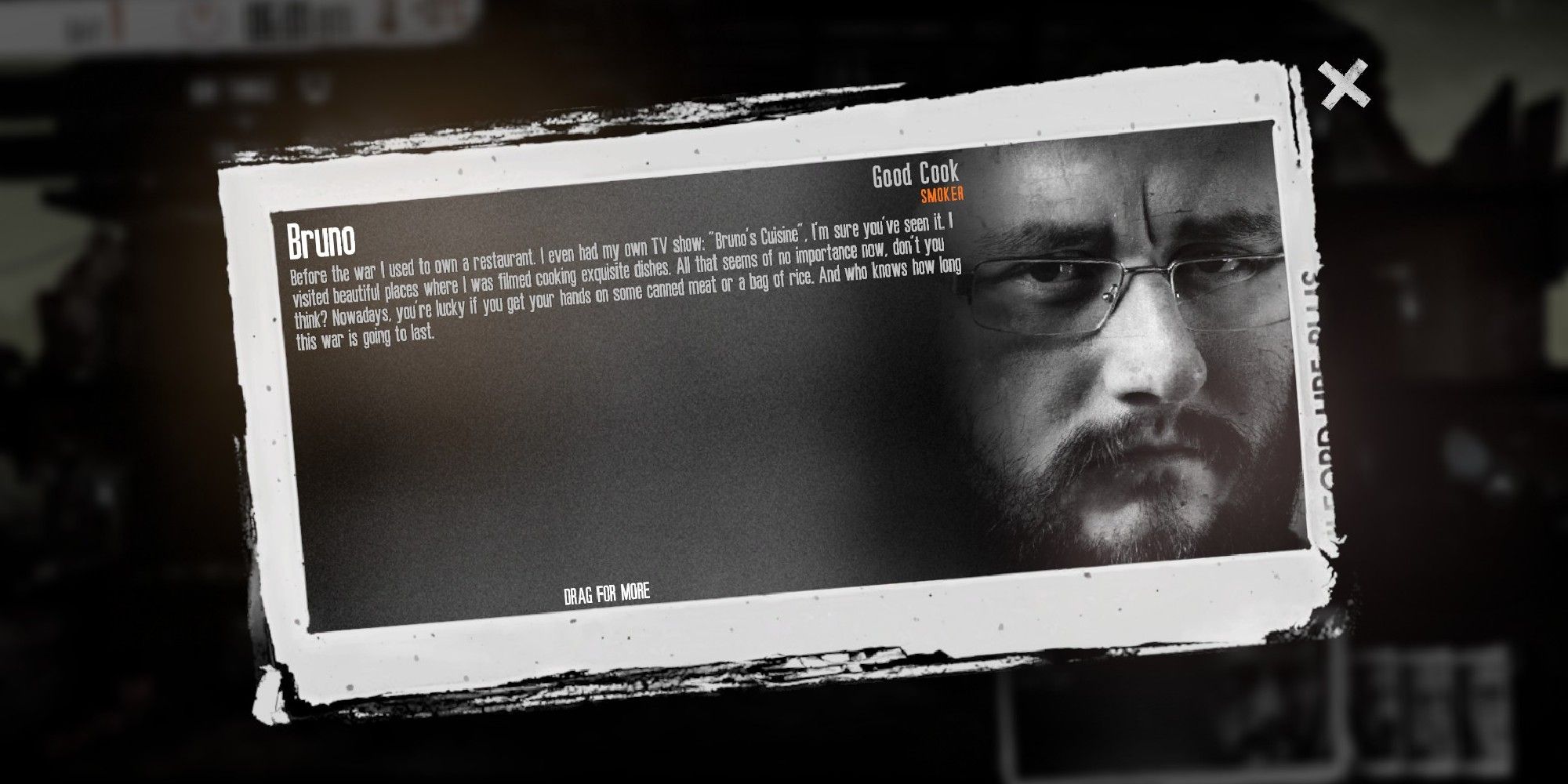 Before that war, Bruno used to be a chef and even owned a restaurant and had his own TV show. Luckily, his skills are precious even if not utilized in a 5-star kitchen. Thanks to his Good Cook trait, he can make food and drinks for cheaper. Making food cheaper is extremely useful in a game where it's all about resource management and survival.

His skill carries over to the upgraded stove, which is a huge plus. Unfortunately, his average-sized inventory and average combat skill keep him from being higher up on the list. 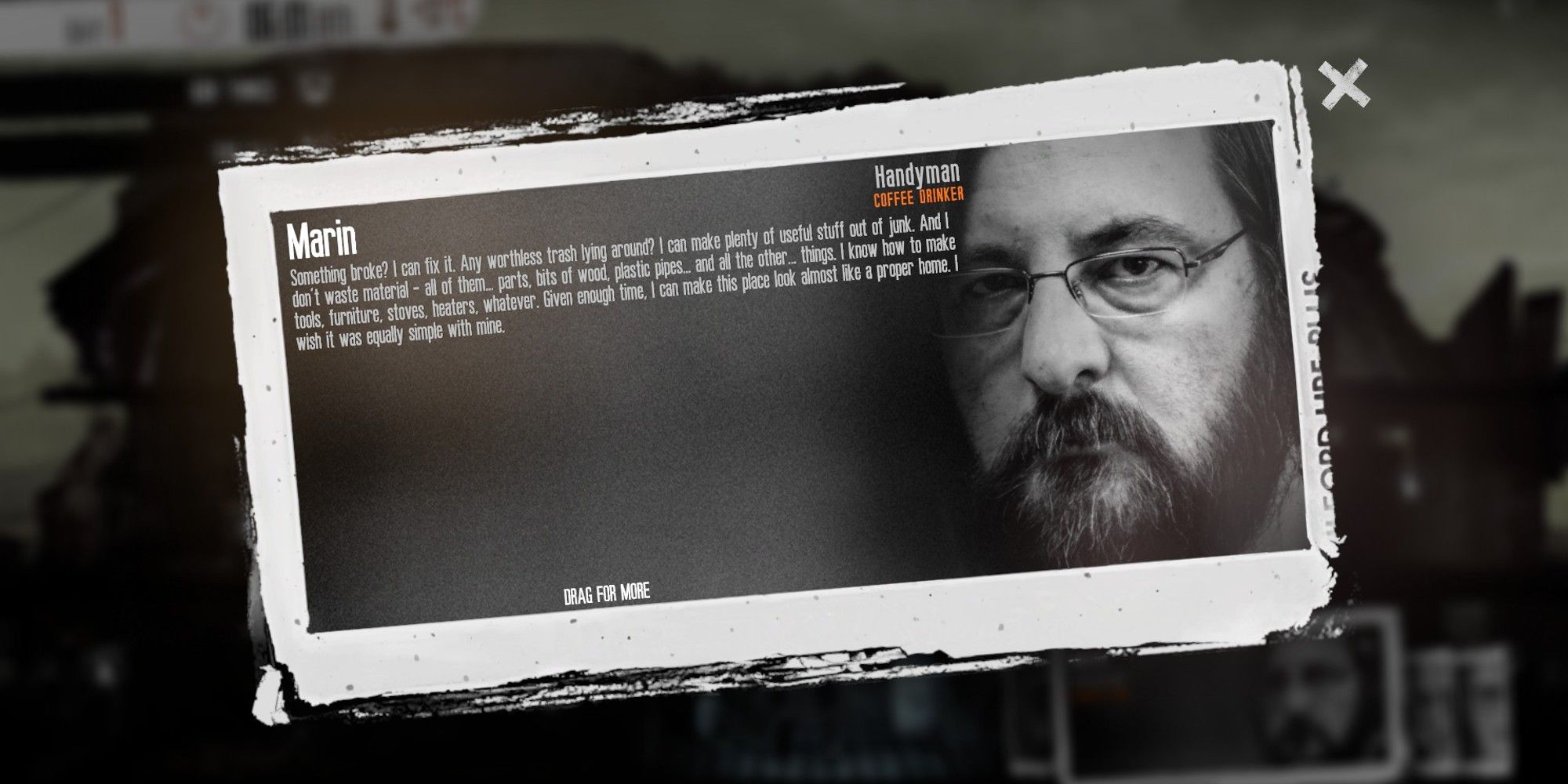 Like Bruno, Marin is great at one thing and the middle of the road in others. This handyman uses fewer materials when he's crafting stuff. This is without a doubt a beneficial skill that any survivor party can take advantage of. He can also start a construction project, and if somebody else takes over, you still get the discount on materials.

This is especially nice in the early game, where lots of crafting will be necessary. As was the case with Bruno, though, he is a one-trick pony and is decent at best in other areas, keeping him from the top of the list. 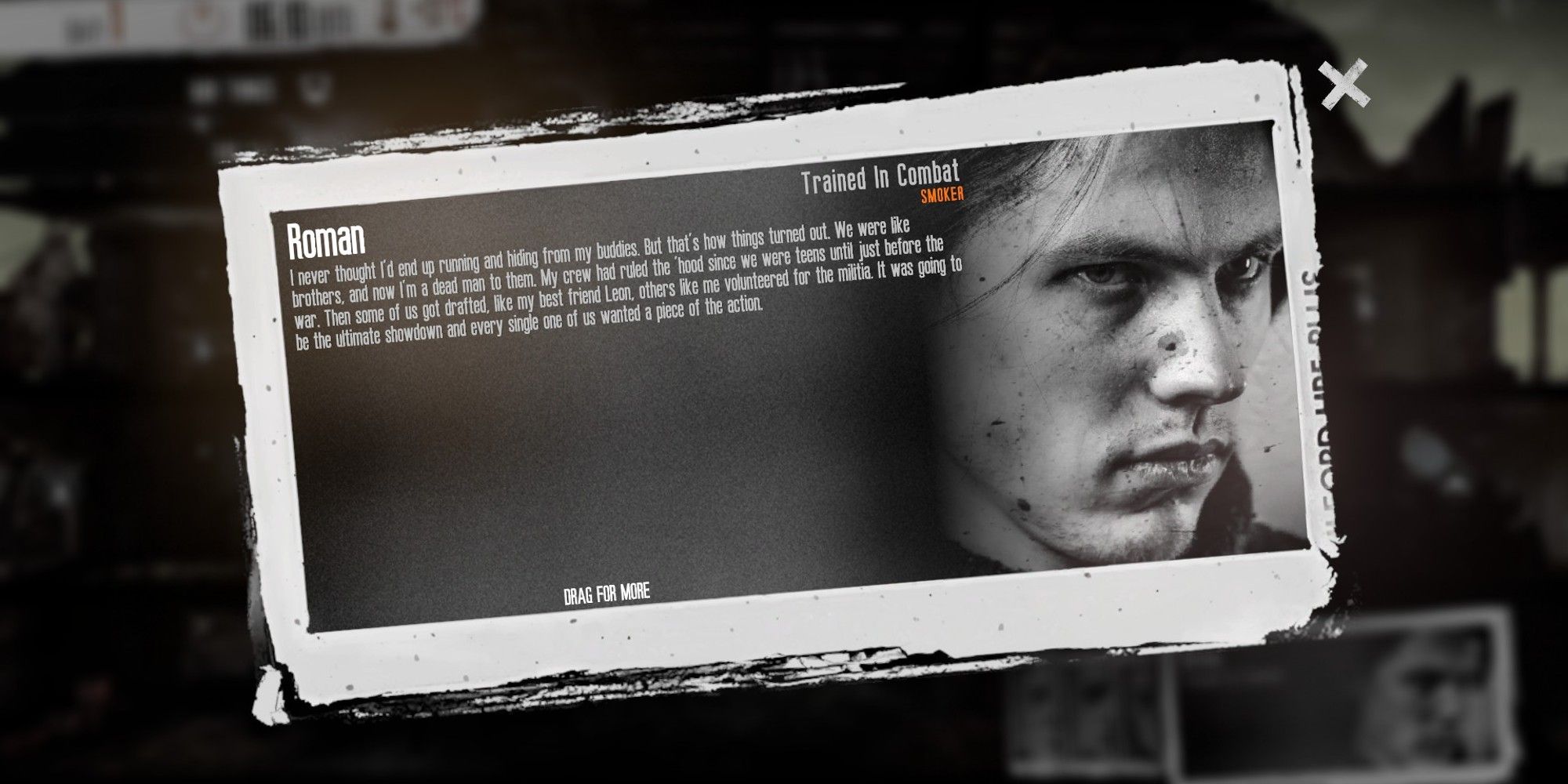 Roman is the loose cannon of the group for sure. He is a militia deserter, and it shows. He is the absolute best combatant in the game and can even perform stealth takedowns on enemies with his bare hands.

Sure, Roman has an average backpack size, is not the most friendly towards other characters, and can't do much else. But he is just such a helpful asset in terms of combat that he's still worth it. Just let him loose on some dangerous areas, and soon those areas won't be so hazardous. 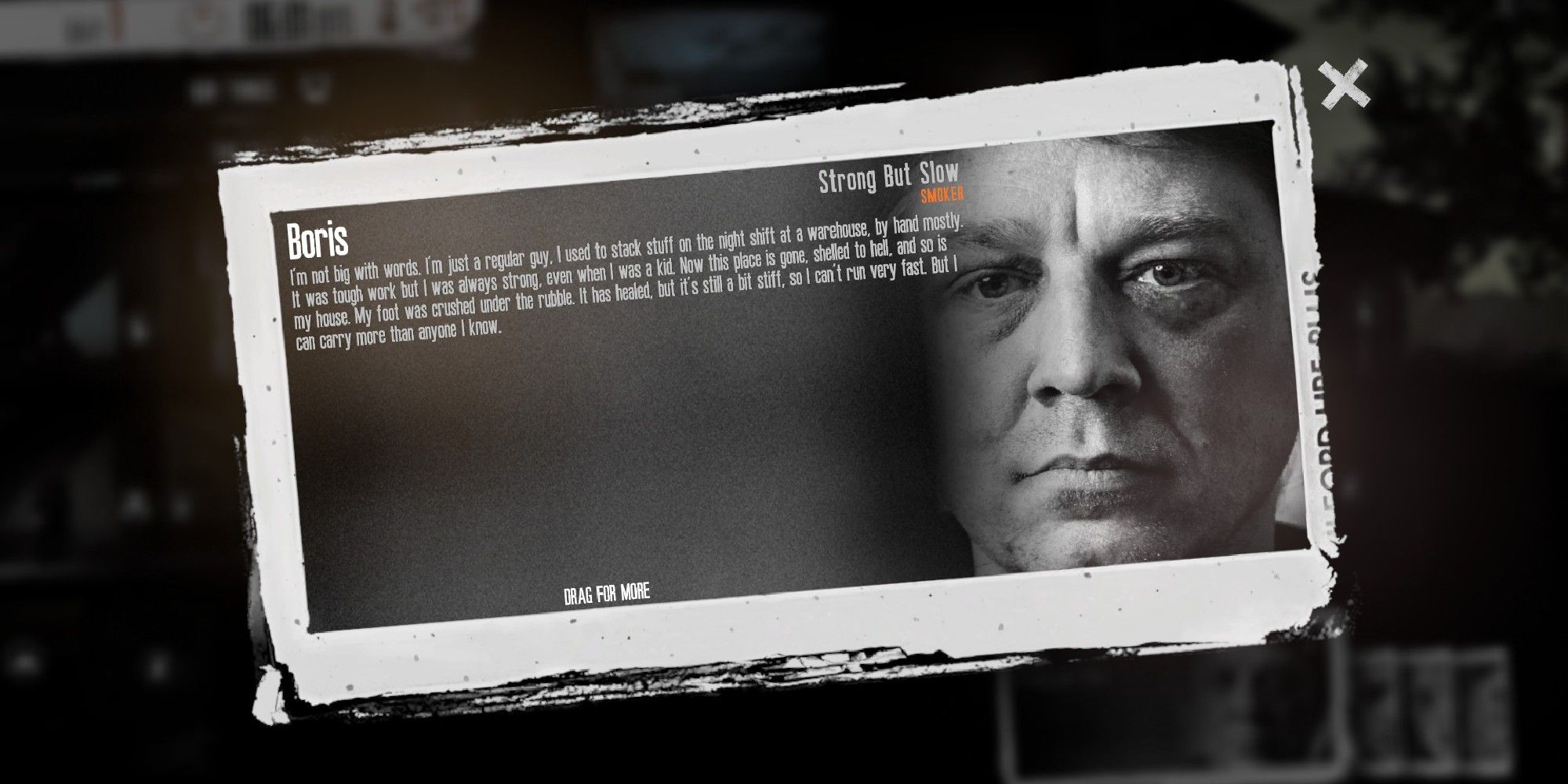 This gentle giant immediately shines thanks to his fantastic inventory space at 17. However, to balance it out, he has an injured foot that causes him to make much more noise and move slowly when running.

As a result, he is best used to scavenge safer locations where you're not going to have to run away from things. He is a decent brawler at close range though, and can serve as a proper guard. Combined with his incredible scavenging possibility, these traits land him in the top three. 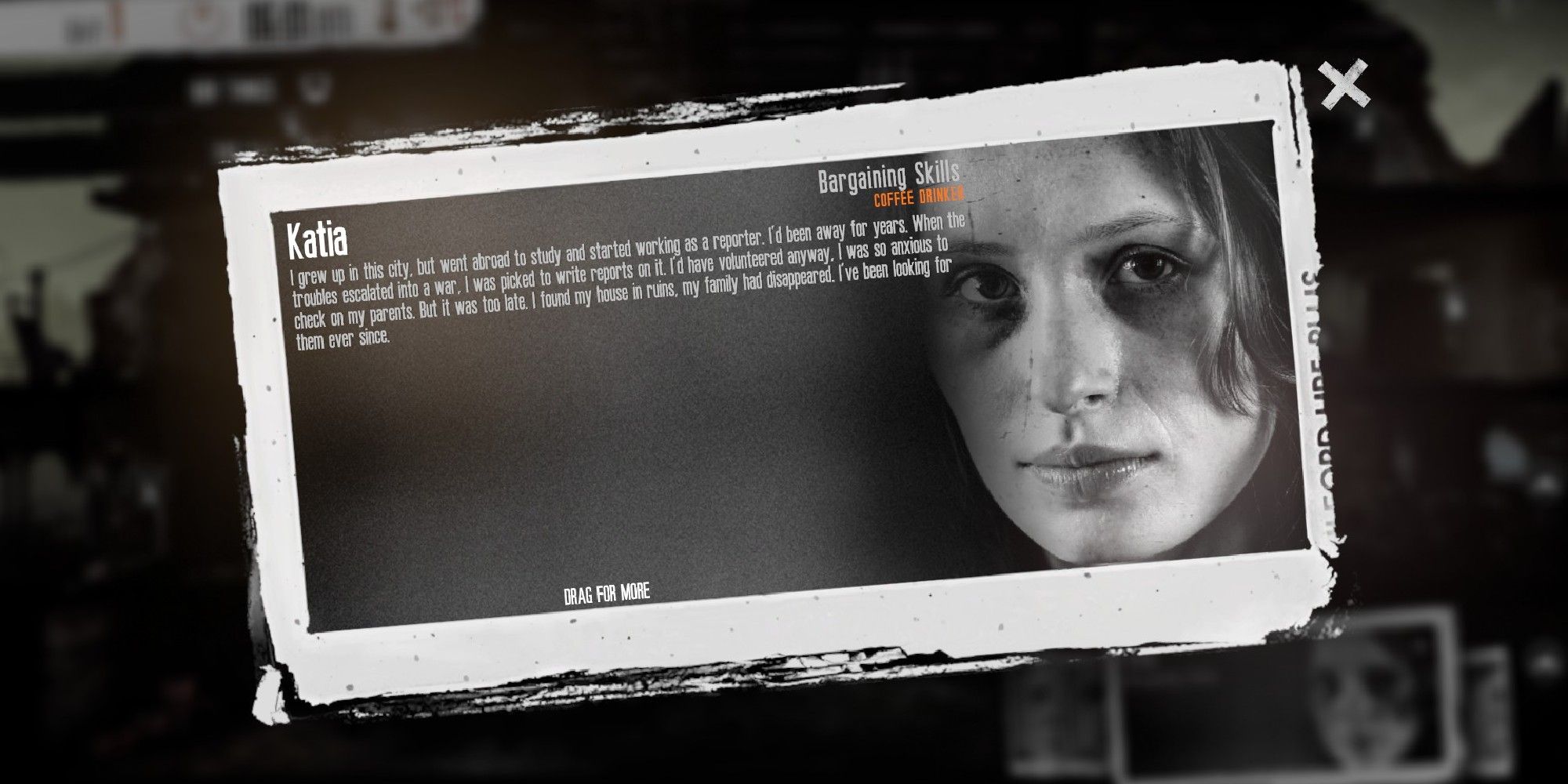 When you look at her skills on paper, Katia might be surprising to be so high on the ranking. Her combat skills are below average, her inventory size is only slightly better than most at 12, and she is susceptible to depression. However, her trait, Bargaining Skills, makes her an incredible asset to any team of survivors.

She can get 20 percent more items while trading. Trading has been a massive part of many games for a long time. However, since This War Of Mine is a game all about resource and character management, being able to grab the required items at a discount is fantastic. You can easily convert the things you don't need into items that are necessary with Katia on your team. 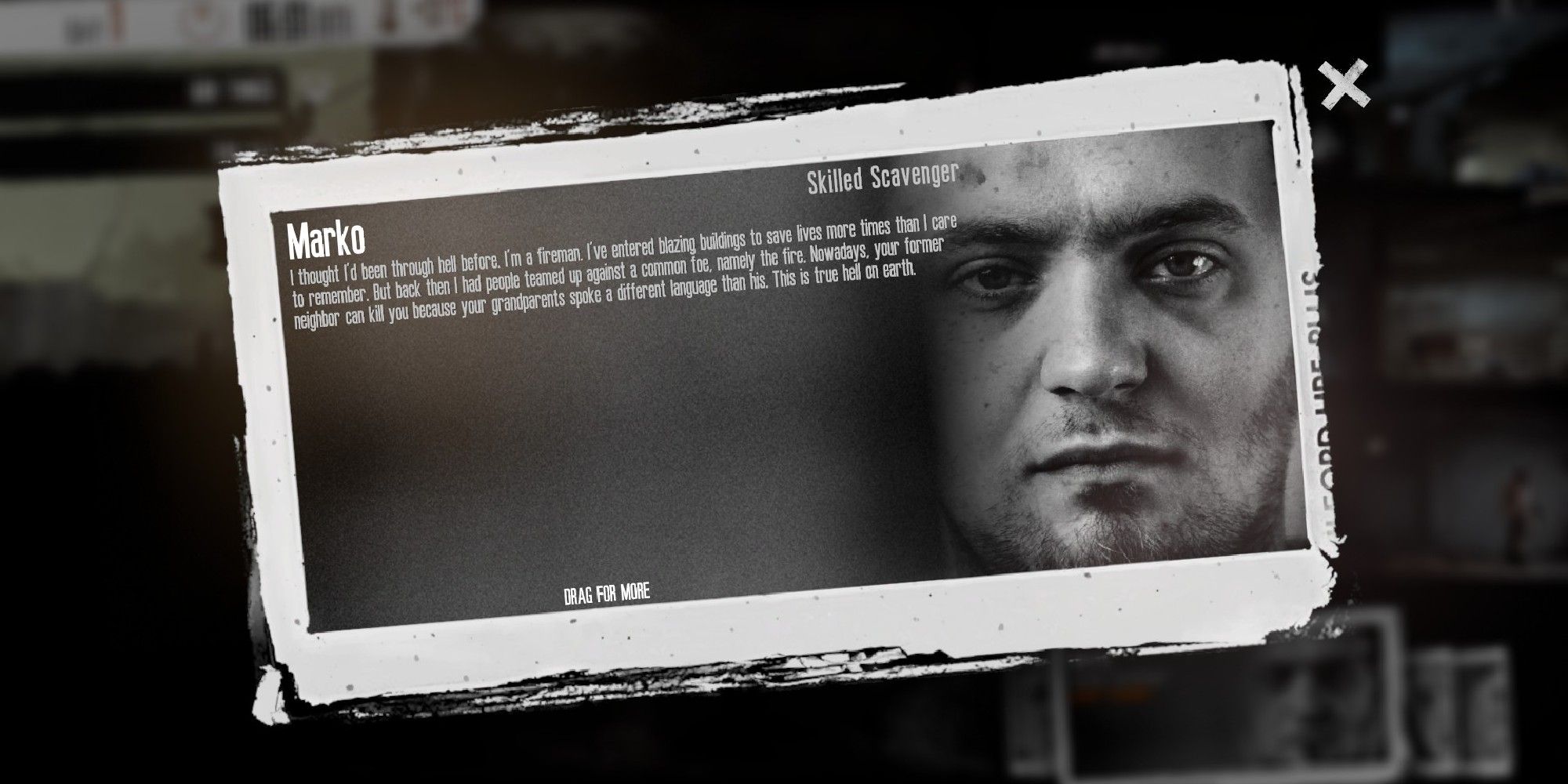 Marko used to be a firefighter before the war. And that is exactly who you want by your side in a crisis. Marko is the complete package. He has the second largest inventory size after Boris at 15, he loots faster, is a decent combatant, has no addictions, and is fast enough to outrun trouble.

While other characters do one specific thing better, as in Boris for inventory size and Roman for combat, no one character does everything as well as Marko. In a game about the unpredictable and chaotic nature of war, you need a swiss army knife of a survivor with you, and that's exactly what Marko is.