You know what the worst thing is about Rocket League? Teammates. They’re either so bad at the game that they let even the simplest of goals in or so good that they get mad when you don’t make a triple-backflip-bounce-off-the-roof-pinch-shot from the other side of the pitch. And nobody wants to defend. If you want to win a match of Rocket League when playing with random teammates, you inevitably end up staying in goal and doing the boring jobs out of necessity. You win, but did you have a good time? Rotate, people.

Rocket League has a solos mode of course, but the ranking system seems to always fail me. I’m either 5-0 up or 5-0 down within minutes, never matched with a player of the same skill level. That’s why I love Turbo Golf Racing, a game which offers solo PvP carball action akin to Rocket League, but without the pesky teammates holding you back.

Obviously there is a core difference in the goals of Rocket League and Turbo Golf Racing; notably that the former is a football match (or hockey, or basketball) where you must score more goals than your opponents in the allotted time, and the latter is a more time trial-esque affair, wherein you must race opponents to get your ball around the mini golf course and into the hole. The games are fundamentally different when it comes to the goals, but from a design perspective they are both about cars hitting balls. 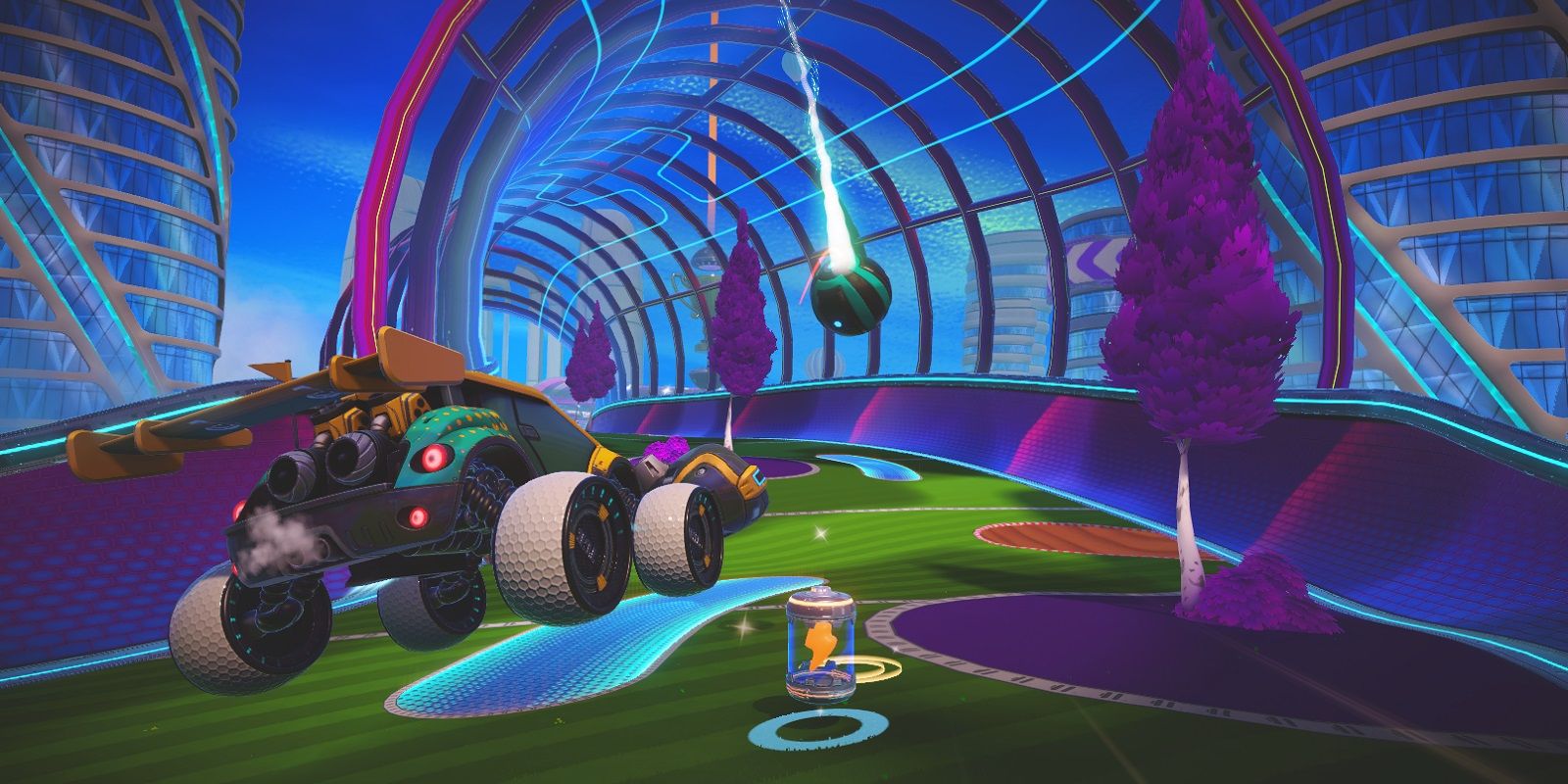 That’s not a bad thing. Using cars to hit balls is great fun. That’s why Rocket League is so successful. Utilising that core idea with a mini golf theme is bound to be fun, but will Turbo Golf Racing be as replayable as Rocket League? And will it be as fun? It’s hard to tell from the demo – the real test is whether you want to play a few more rounds every day for a month or a year – but it definitely scratches that single-player itch when teammates get too much and solos don’t hit the spot.

The phrase ‘mini golf’ is a slight misnomer, but it’s the best description I’ve got. That’s because the holes are winding and wacky like mini golf (as opposed to the straight edge fairways of regular golf), but seeing as your car and ball are extra tiny, the courses seem massive from your perspective. Each hole takes a minute or two to complete, and each round consists of playing three holes against seven random opponents. There are also MarioKart style power-ups and weapons you can utilise, which can turn the tide of a hole in a matter of seconds. A well-timed missile and a quick boost? First place is yours, baby.

The courses themselves are well-designed and fun. Each one has multiple routes and options, which is important when you’ll be replaying them fairly often. There are spirals and cannons, portals and bunkers, everything a good fantasy carball golf game needs to be fun. Combine the creative levels with power ups and items, and you’ve got carnage. 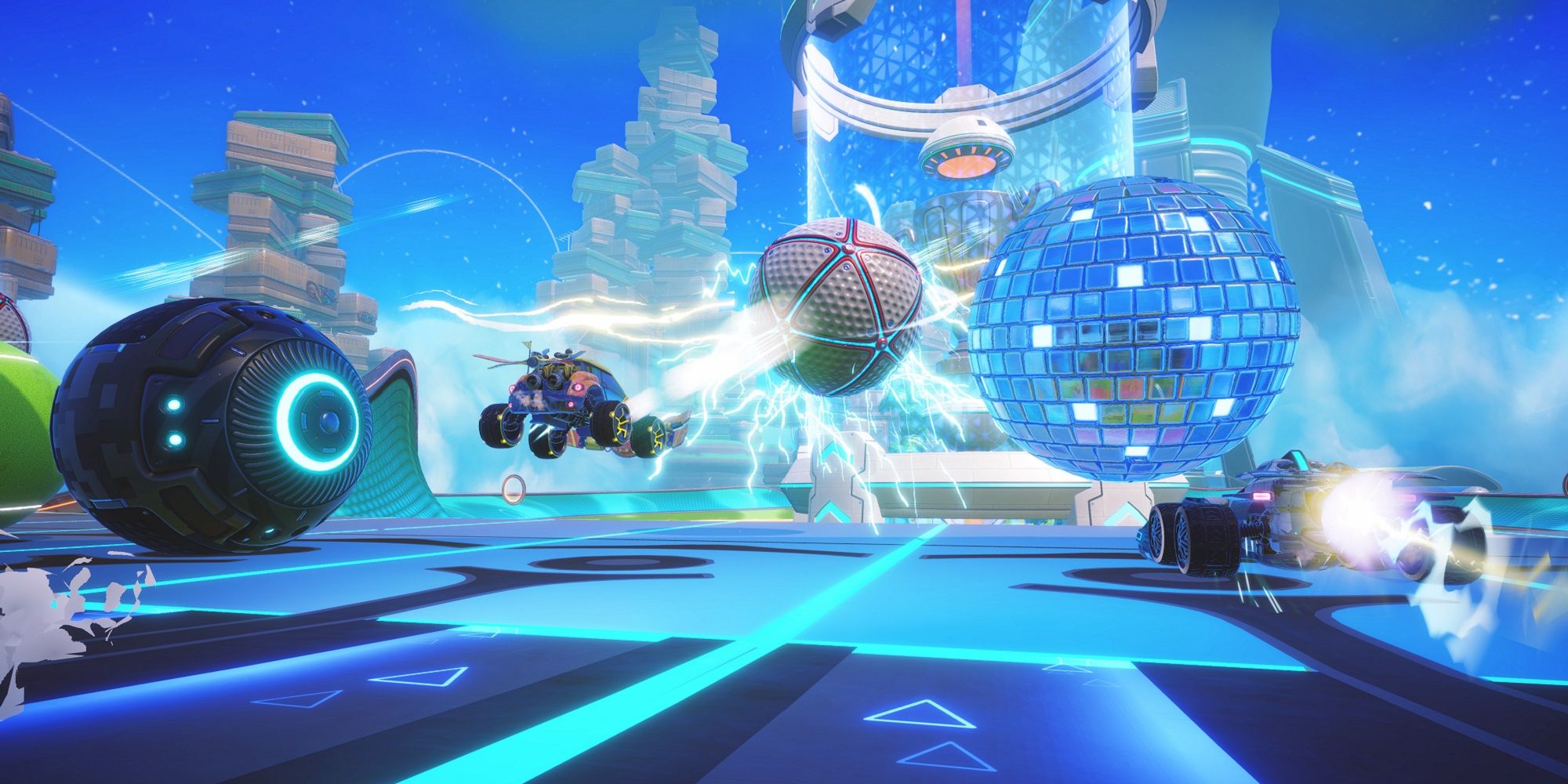 The power ups are worth mentioning, as they are more Rocket League than Mario Kart. While you can run into missiles and boosts on each hole, power ups are unlocked through challenges, battle passes, or the in-game shop, and some are far more powerful than others. I unlocked one that made my boost better as I played, but other players had bought a magnesis power in the shop (with in-game currency, not real money) that was far better and quite overpowered. Miss the hole? Magnet your ball into it. Headed for a bunker? Magnet your ball back towards you.

It didn’t appear in the shop rotation any time I was online, despite having enough currency for it, and missing out on such a strong power felt pretty bad. I like the idea of customising your vehicle to suit your playstyle, but locking certain gameplay-affecting items behind paywalls or shopfronts didn’t feel good. A new spoiler or decoration for your car? Sure. Great. Knock yourself out. A magnet power that everyone else seemed to have but I couldn’t find through sheer bad luck? Not so nice.

Despite my magnet-based issues, I had great fun with Turbo Golf Racing, and it feels like the single-player Rocket League experience I’ve always kind of wanted. I may not have realised it before now, but a time trial race to the hole, missiles and magnets armed, is the perfect antidote to toxic teammates. The real test will be when the game is released in full, as it will need to maintain a solid community of regular players to stay afloat. If that initial playerbase is to be maintained, the game needs regular, engaging updates, new courses, and exciting limited time modes. It’s too early to tell if Turbo Golf Racing is a hole in one, but it’s teed off incredibly well.