Not all bosses in V Rising can be found in a set location. Some prefer to roam around, seemingly waiting until you are otherwise engaged, before appearing to ruin your day or night! One of these bosses is Goreswine The Ravager, an especially nasty pigman who utilises Unholy magic to wear down his foes. Defeating him will reward you with not one but two Unholy spells, so he is worth the hassle of locating.

This guide will prepare you to locate Goreswine The Ravager, how to best fight him, and what rewards you will gain from defeating him. 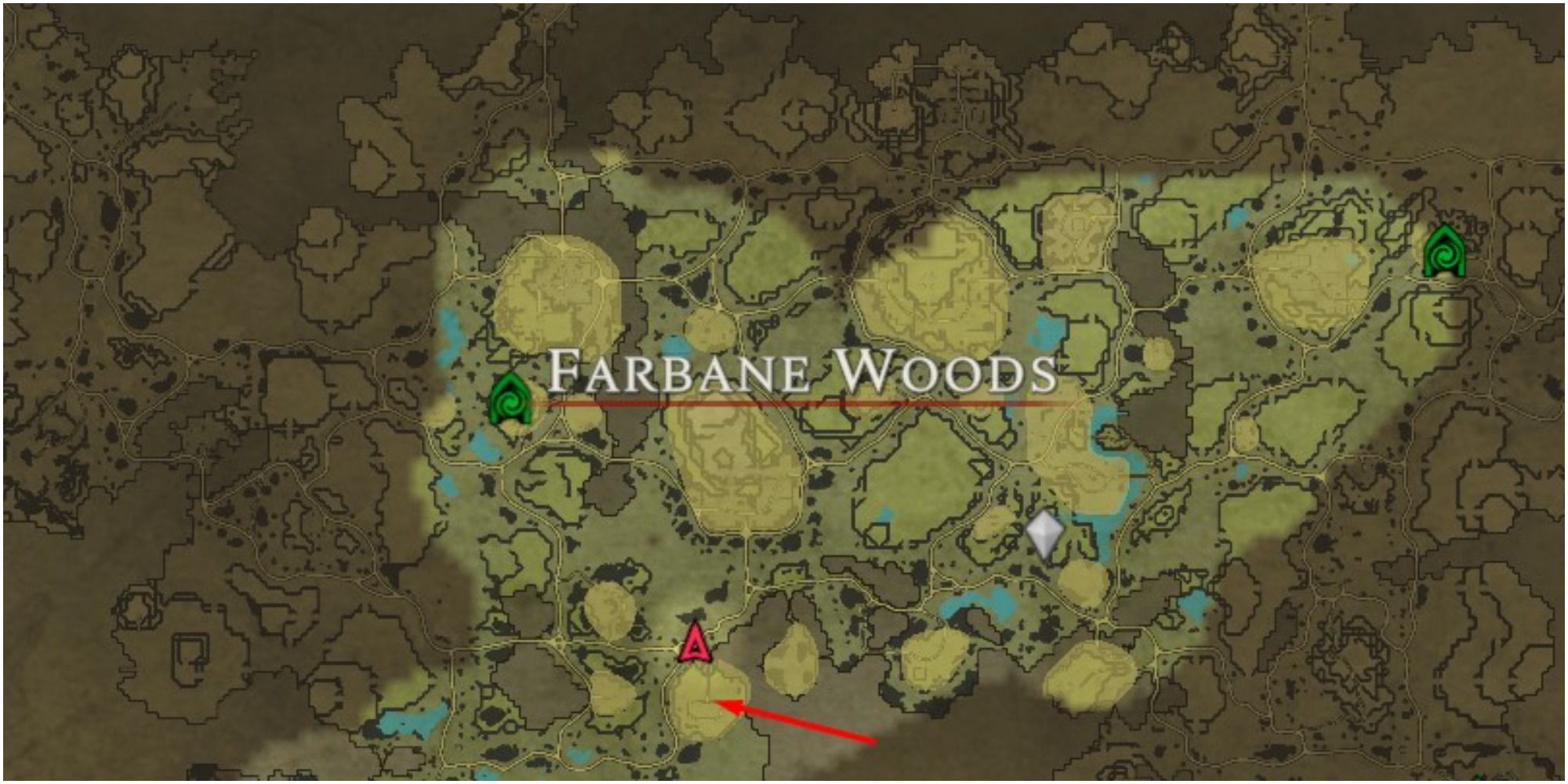 Goreswine is a roaming, level 27 V Rising boss, meaning he has no set location where you will always find him. However, he is normally found in and around the Desecrated and Infested Graveyards in Farbane Woods. These are his spawn points, and he spends a large amount of time at these locations before leaving to wander the roads. He can also be found near the Bandit Logging Camp.

The best way to track down these roaming bosses is to use your Blood Altar, as it will always lead you to their current location. Sometimes the blood trail can be difficult to follow, as it will not take into account any terrain between you and the boss, so you may need to path around hills or other blockades.

Goreswine will be travelling with four Skeleton Guards, but they are not particularly strong, and you should be able to take them out at the start of the fight with little to no problem. As he is roaming, you can make sure the area you choose to engage him is kept free from other mobs, and if you decide to try hard mode and fight him during the daytime, be sure to keep enough shade around you to avoid being burnt by the sun. 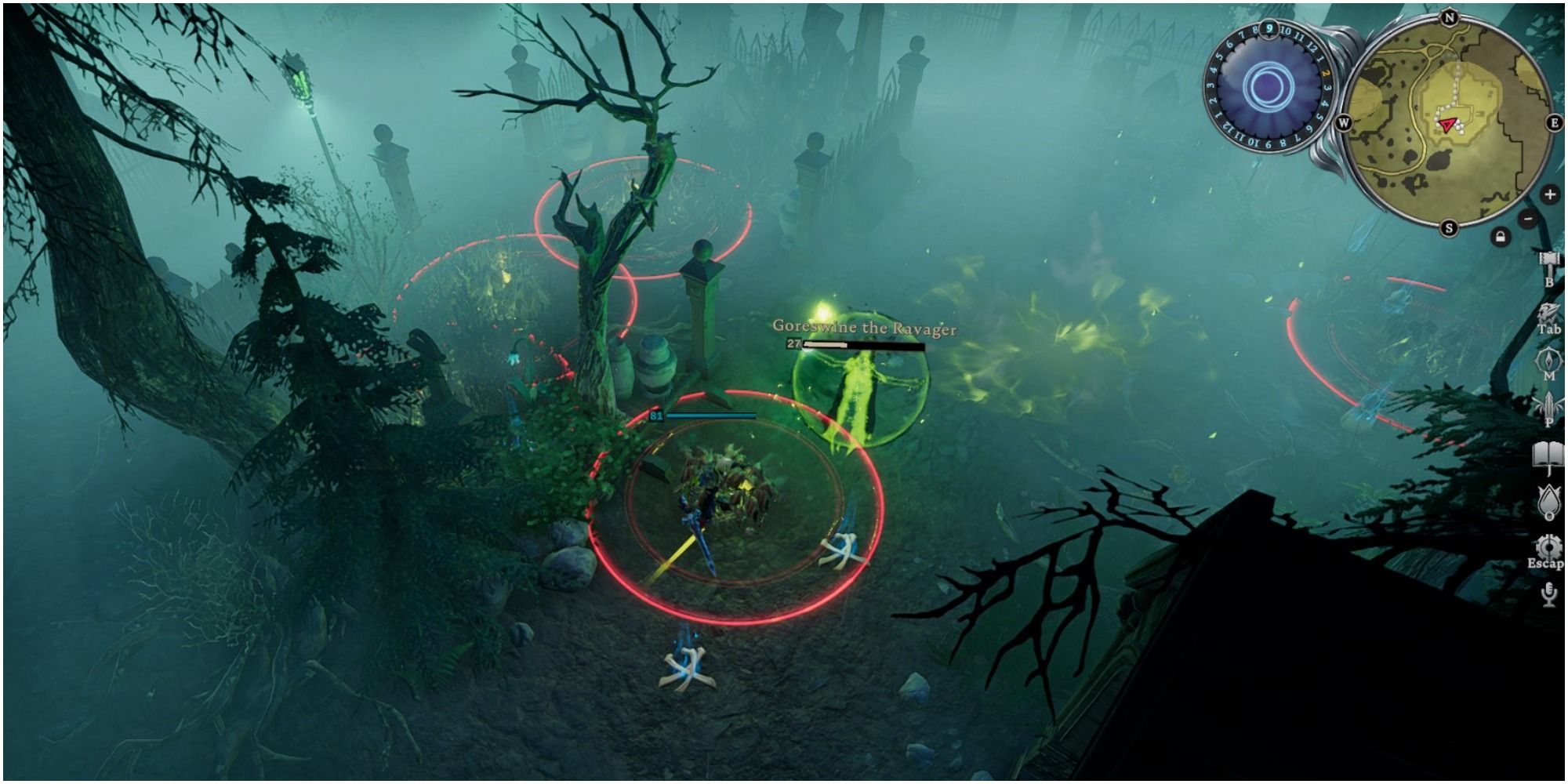 Goreswine does not have many abilities, but the ones he does possess are very impactful. Throughout the fight, Goreswine will cast explosive green pools on the ground. These will erupt, dealing Unholy damage and leaving a pool of poison on the floor. These pools last for quite a while, and there are sure to be multiple present at any one time. This can significantly reduce the amount of room you have to work with, and worse yet, Goreswine can randomly choose to go and stand inside one of them, making it very difficult for you to hit him with melee attacks. It is best to bring a Crossbow in order to deal with this mechanic, as you can simply run around dodging the pools whilst still shooting him.

Goreswine will also frequently teleport away from you, leaving another poison pool on the ground, although this should not really matter if you are fighting him at range. The fight is a battle of attrition, and it will take a while to whittle him down if you are in appropriate gear.

The Ravager's ultimate ability will cause him to levitate and place a bright green shield upon himself. This will make him immune and trigger frequent explosions centered around the player's locations. As you cannot damage him, it is best to simply run away at this point, as there are numerous explosions, and it will be difficult to find a safe spot, but be sure not to move too far else the boss will reset.

A set of Nightstalker armour and a Merciless Copper weapon is good enough for this fight, but expect it to take a while as he has a decently high health pool. Shadowbolt and Chaos Volley provide you with the best single-target ranged spells, and Crimson Aegis can be a nice defensive option. 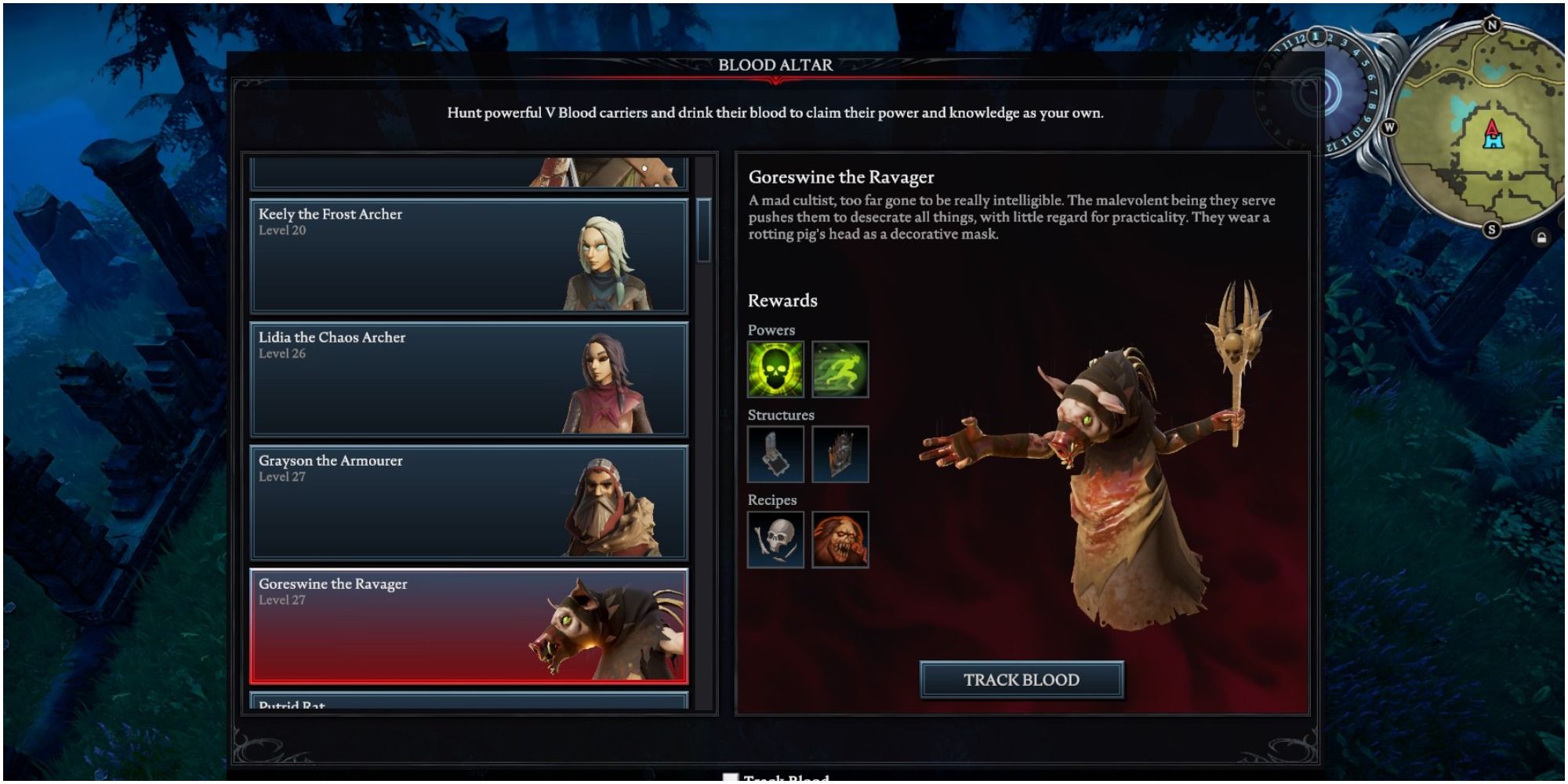 Goreswine The Ravager will grant you two Vampire Powers upon draining his V Blood: Corpse Explosion and Veil of Bones. Corpse Explosion is an AoE ground target attack that deals damage and applies a short snare, potentially useful for helping clear out large groups of weak enemies, but nothing spectacular. Veil of Bones is a new Travel ability that causes your next attack to launch a projectile forwards, bouncing to up to four targets and placing a small damage-taken increase on them. This can be a nice DPS upgrade over Veil of Blood, so feel free to switch over if you will not miss the small heal.

Goreswine will also reward you with the Tomb structure as well as two recipes, Summon Skeleton and Summon Ghoul. An interesting mechanic, this building will allow you to summon different enemies right in the comfort of your own backyard. This can provide a nice farm for items such as Bones and Grave Dust, resources that will become much more necessary the further you progress throughout V Rising.