From the plains of Eidolon on Earth to the Cambion Drift in Deimos and a whole array of planets in between, Warframe presents an immense arsenal of characters, weapons, and companions that will help the Tenno on their adventures through the Origin System against the many villainous factions fighting for dominance.

One of the many characters that you can unlock and use in combat is Inaros, the ancient pharaoh that can come back from death whenever he wants. In combat, Inaros is also one of the toughest warframes, displaying an inherent potential to become an indestructible weapon in any kind of situation.

How To Craft Inaros 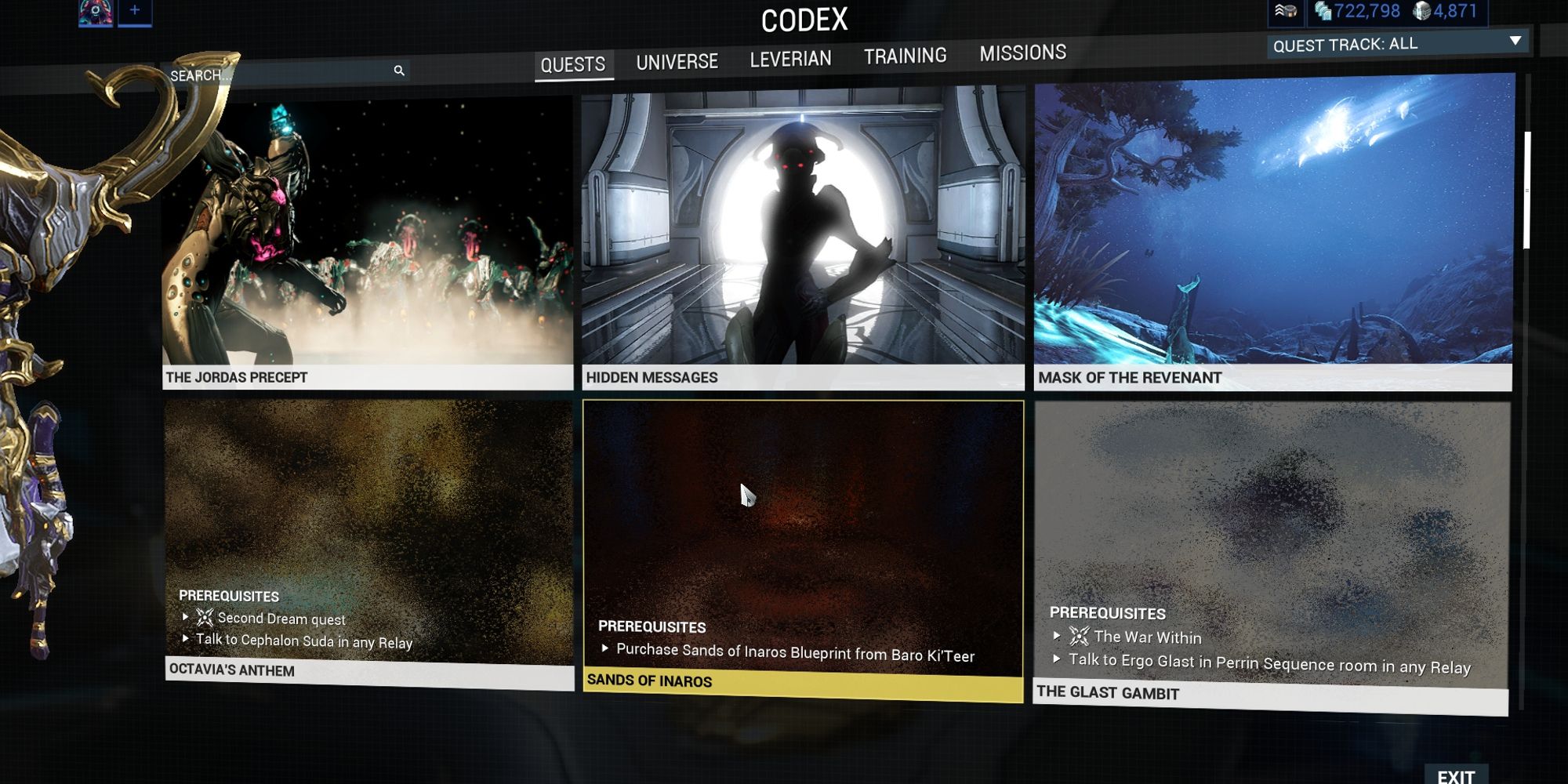 To craft Inaros you must obtain his Main and Component Blueprints, all of them obtainable as rewards from completing the Sands of Inaros quest. The quest iself can be purchased from the Void Trader, Baro Ki'teer, and you can buy additional Main and Component blueprints from Cephalon Simaris. The materials are fairly common, but you will need a few tricky ones to obtain, such as the Argon Crystal and Nitain Extract. The first is a resource that can be found in the void and will slowly decay, disappearing from your inventory (use it quickly!), and the latter can be purchased from Nora Night in the Nightwave shop. 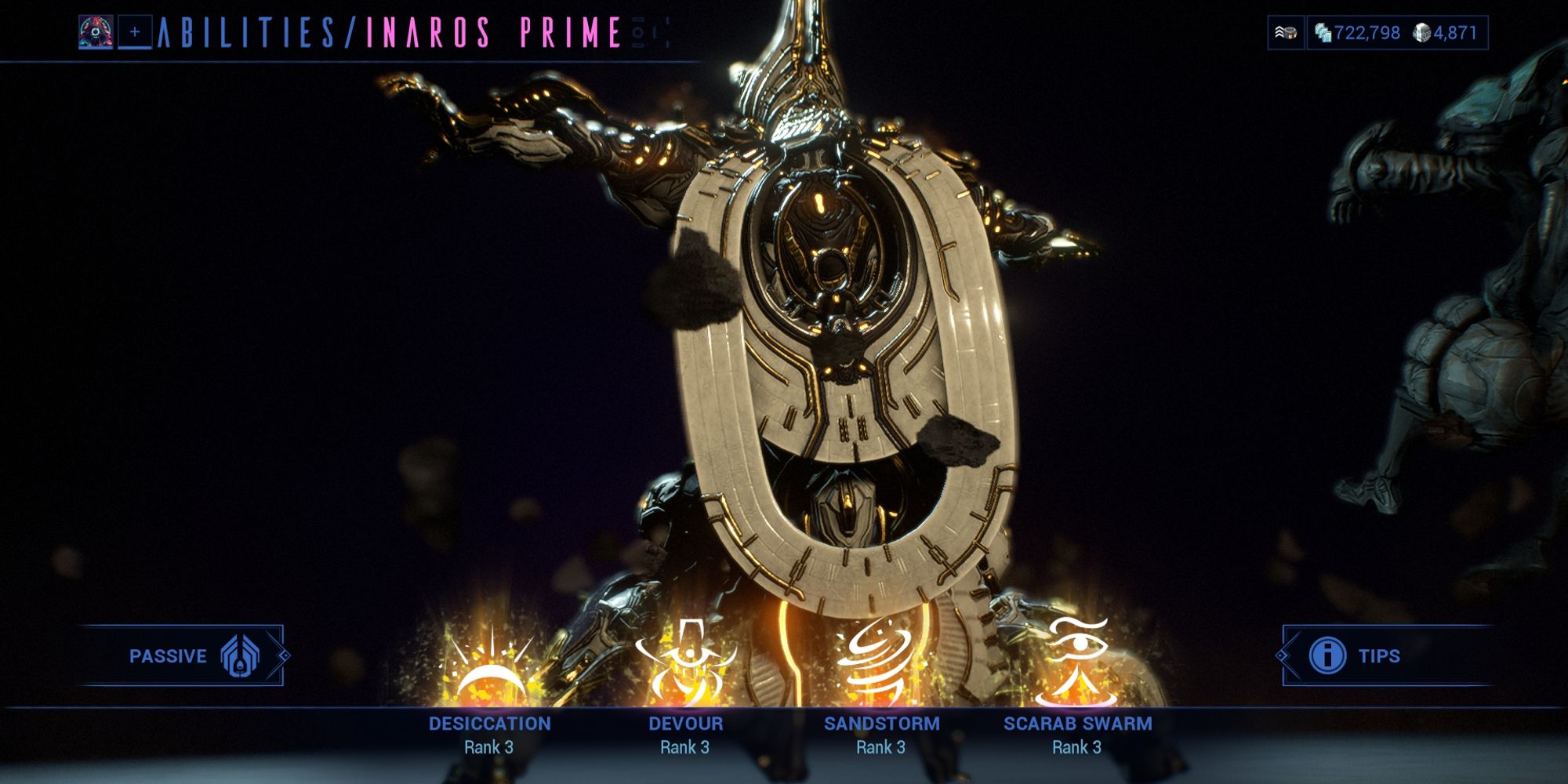 While bleeding-out, Inaros becomes entombed in a protective sarcophagus. He can revive himself by draining the life force from nearby enemies and allies.

While Inaros can be a very tanky warframe, this ability can act as a safeguard, should the worst happen. When you're inside the sarcophagus, you can aim and shoot a beam that will siphon the life from nearby enemies and restore Inaros' Health until he's good enough to go back to the battlefield. Likewise, allies can revive Inaros by interacting with the Sarcophagus, like any other revive method.

There's also two extra passive effects that Inaros possesses and they're helpful enough to talk about. First, Inaros will heal 20% of his own Health when realizing Melee Finishers, something that works great if you use Desiccation. The second efect is a native bonus on Health and Energy that reaches +300% Health and +50% Energy by Rank 30. 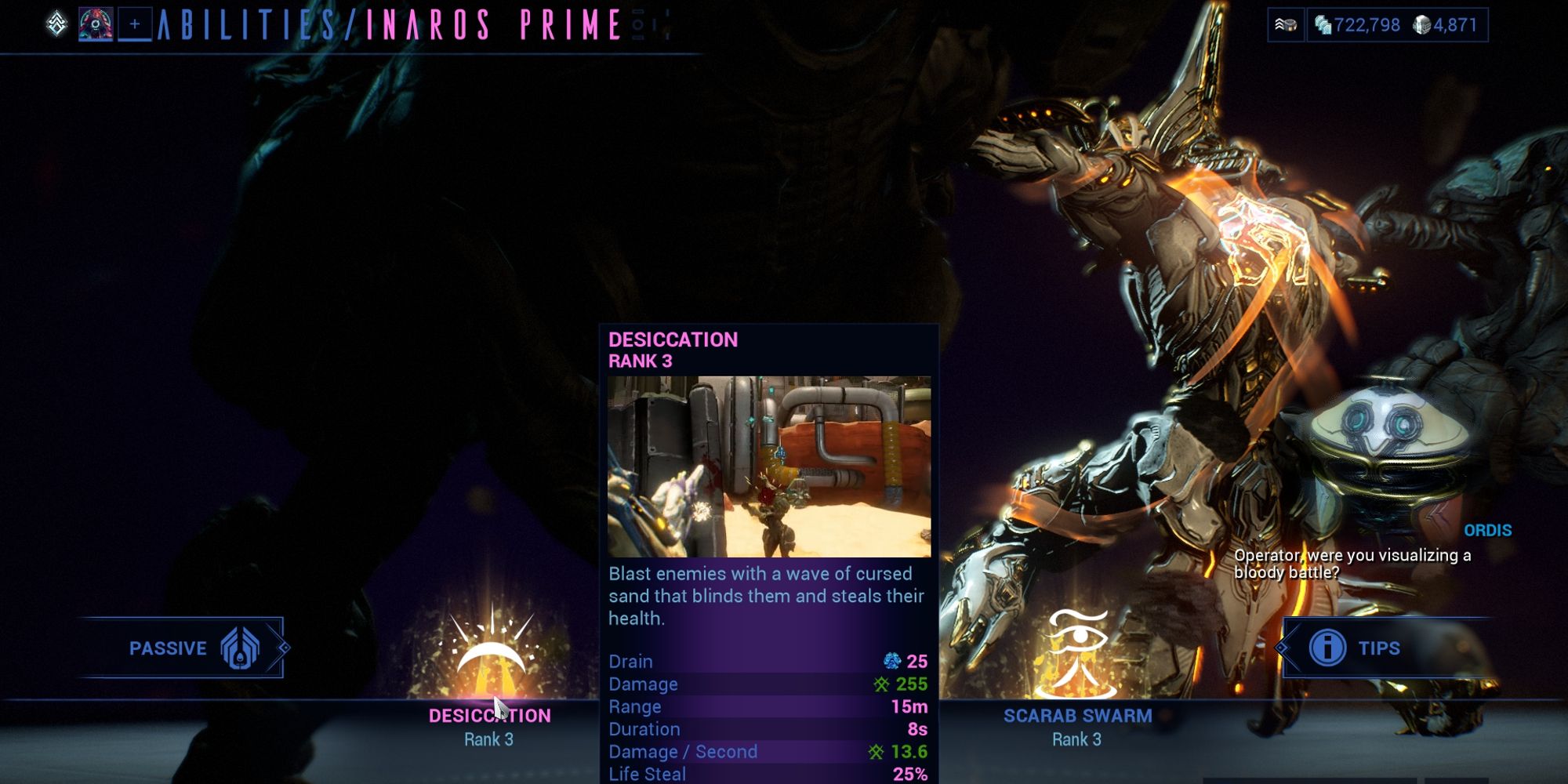 Desiccation: Blast enemies with a wave of cursed sand that blinds them and steals their health.

Desiccation works both as a Life Steal resource and a Crowd Control tool, since you make any enemy affected stagger while you drain their Health. You can also improve upon this ability by equipping the Augment Mod Desiccation's Curse, which has a chance to summon a Sand Shadow when defeating a staggered enemy with a Melee finisher. 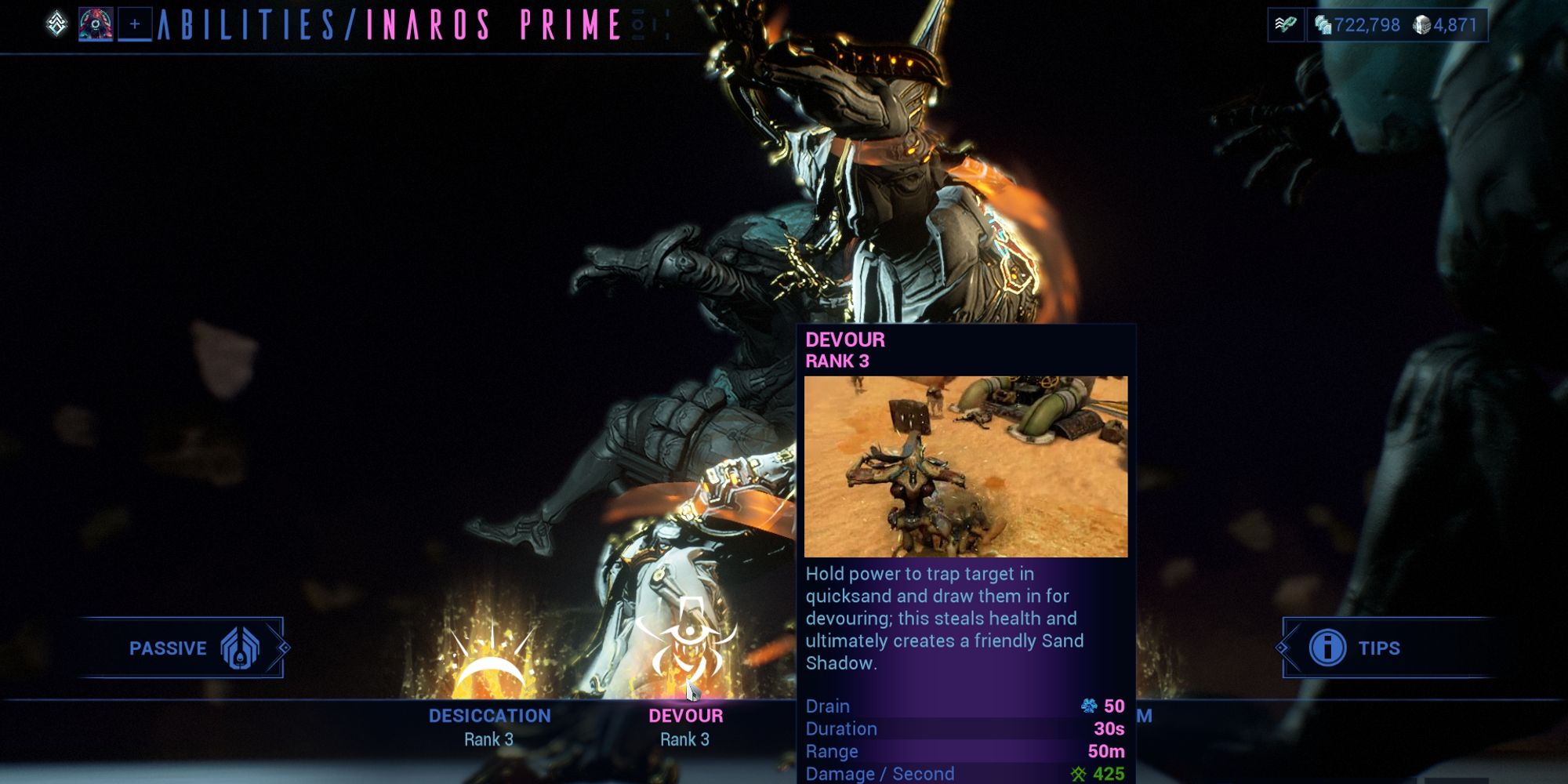 Devour: Hold power to trap target in quicksand and draw them in for devouring; this steals health and ultimately creates a friendly Sand Shadow.

Devour works similarly to Desiccation, with the prime difference being it's focus on Life Steal instead of crowd control, since you can only target one enemy with this ability, and the Life Recovery is significantly more efficient. If you manage to kill an enemy by the effects of this ability, a friendly clone of that enemy called Sand Shadow will aid you for a short time. 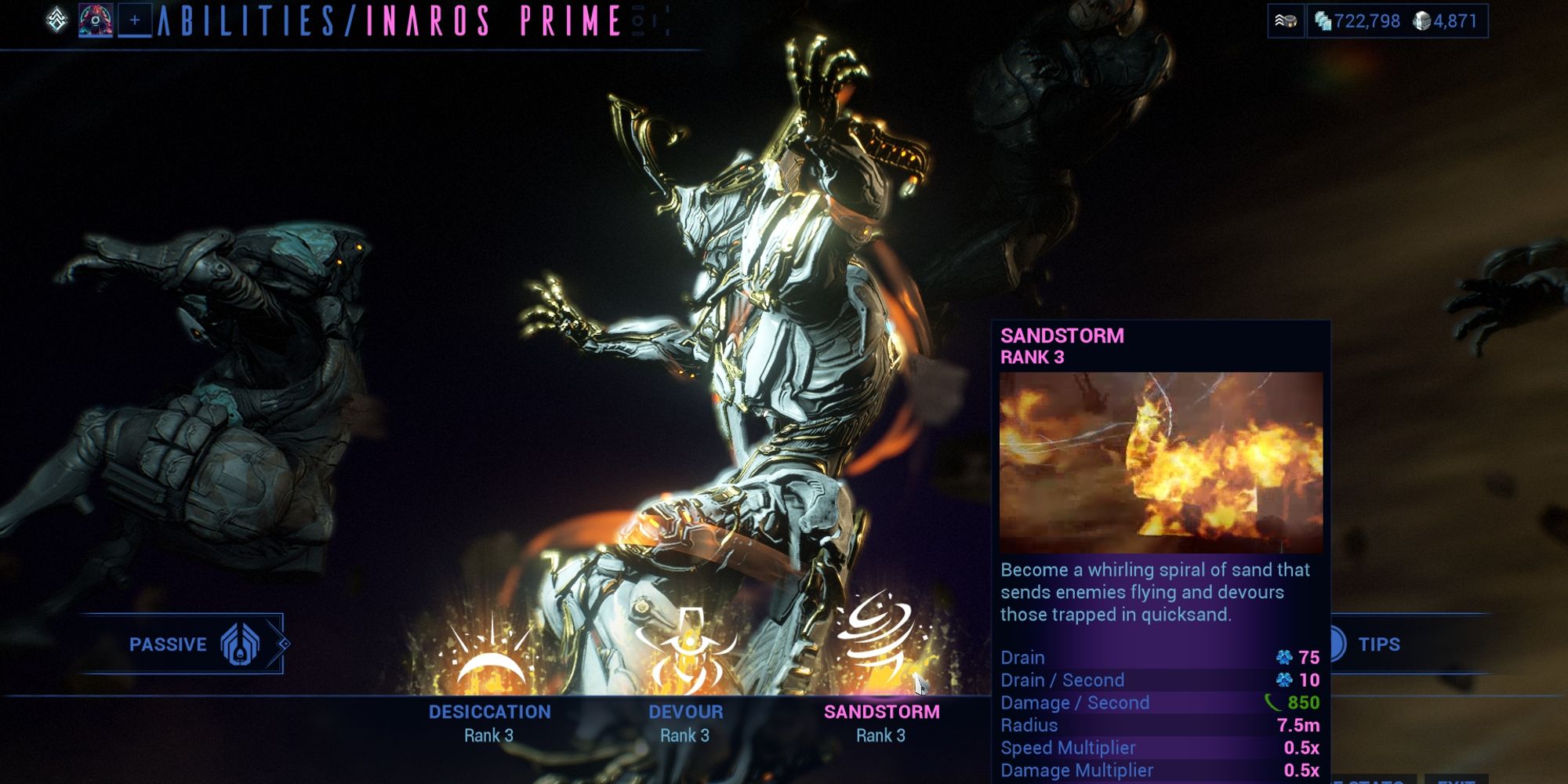 Sandstorm: Become a whirling spiral of sand that sends enemies flying and devours those trapped in quicksand.

Another Crowd Control tool, this ability is more on the offensive side, since it will damage enemies while making them ragdoll up in the air. That being said, Inaros is left pretty vulnerable and the damage this skill applies isn't too strong, so chances are that you won't use it very often. That's unless you decide to use its Augment Mod, Elemental Sandstorm, which will also inflict Status Damage based on the Damage types that your melee weapon currently has. 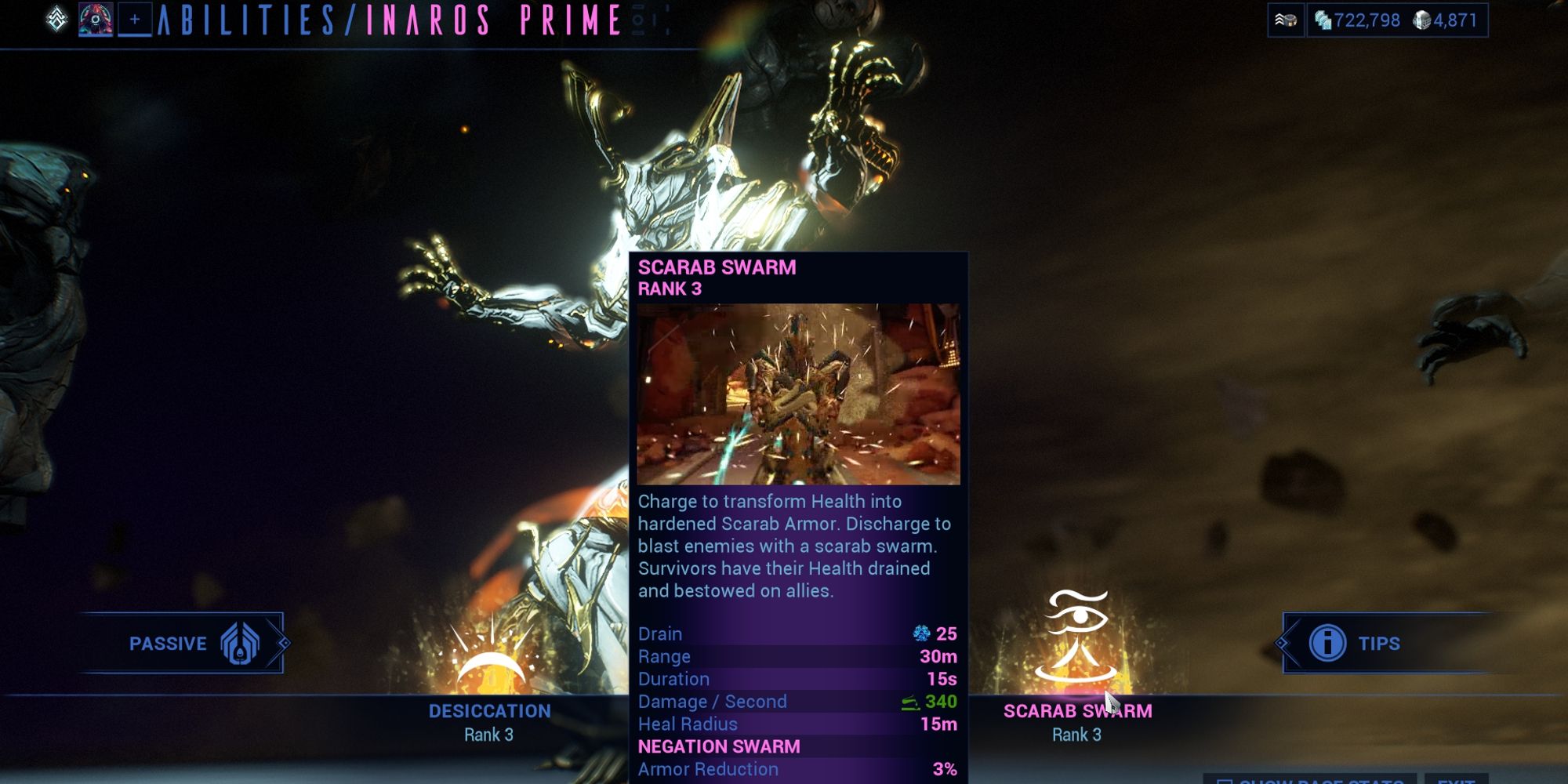 Scarab Swarm: Charge to transform health into hardened scarab armor. Discharge to blast enemies with a scarab swarm; survivors have their health drained and bestowed on allies.

​​​​​​​Scarab Swarm is by far the most useful ability of Inaros. Casting this ability will require you to sacrifice Health in order to gain Scarab Armor, a buff that will give you up to 100% of extra Armor. This is further improved by using the Augment Mod Negation Swarm, which allows you to block incoming Status Effects, draining 3% of Scarab Armor each time you do it.

The Prime version of Inaros possesses higher Health, Energy, and Sprint Speed, and an additional Madurai Polarity. This Prime warframe was released on July 14th of 2020, with the Panthera Prime and Karyst Prime as his flagship weapons. 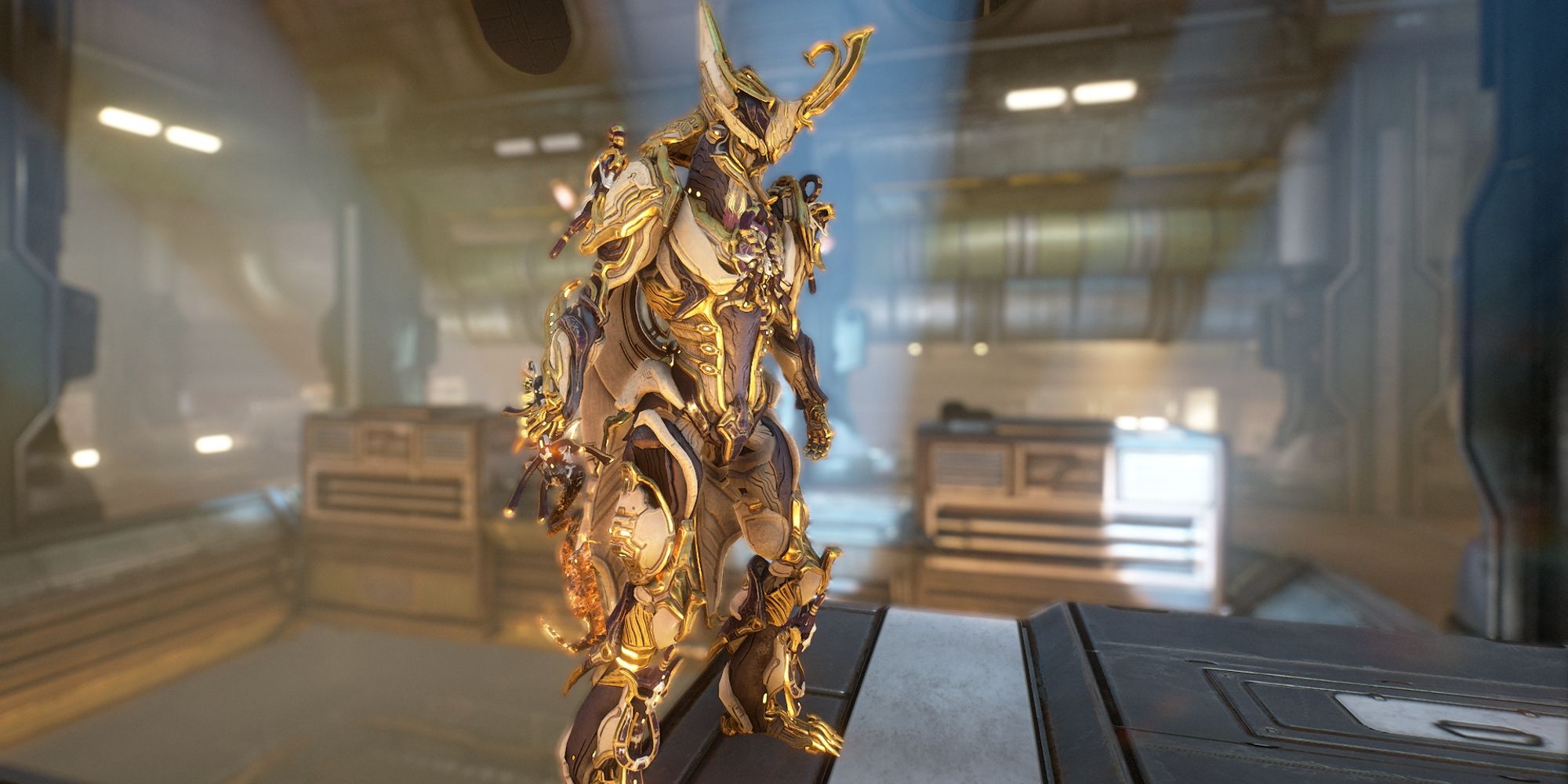 The idea behind this very straightforward build is to provide enough buffs on Armor and Status Resistances for Inaros to become an incredibly tanky character. For that very reason, Mods such as Vigor, Steel Fiber, Adaptation, and the Augment Mod Negation Swarm will be strictly necessary. The rest of the loadout will be bonuses on overall sustainability in the form of Vitality and Gladiator Resolve, Steel Charge providing a bonus on Melee combat for better Life Steal, Rage and Stretch for Energy Recovery and more Range, and the very useful Handspring, which will avoid that annoying vulnerability when you get knocked down. It's just a matter of having your Scarab Armor at max percentage at all times, and you should be indestructible in almost any context.