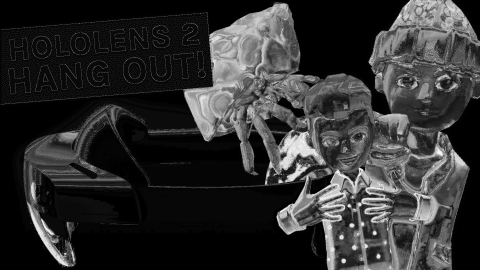 A few weeks back, we reported on Microsoft Mesh, a new framework for enabling social and collaborative AR experiences on its HoloLens headset that also works cross-platform with other devices.

At the time, we were able to experience Mesh in a controlled demo. But, now that Microsoft is rolling a preview version of the platform out, we dived back in to talk about the toolset. Watch myself and UploadVR Managing Editor, Ian Hamilton, walk through what Mesh is capable of (so far) below.

Inside the Mesh preview app HoloLens users can meet up, generate 3D assets to share between each other and draw in 3D space. It’s a remarkably intuitive experience similar to what can be seen in many current social VR apps, but doing all of this in AR gives Mesh a more instantaneous and productive feel than jumping into an entirely different virtual world.

But Mesh isn’t limited to this single app. In a demonstration in early March we saw apps like Pokemon Go tease potential future support with this feature, and Microsoft is also making it cross-platform and compatible with PCs, smartphones and VR headsets (including Oculus devices), meaning a more ambitious platform isn’t far out. We could see VR and AR games with cross-platform support, for example, or imagine a version of UploadVR’s Download podcast in which members can join in on their real couch instead of a virtual one.

There’s plenty of potential but, just like HoloLens 2 itself, it’s early days and AR technology has far to go. We’ll keep following its development as more players enter the field.