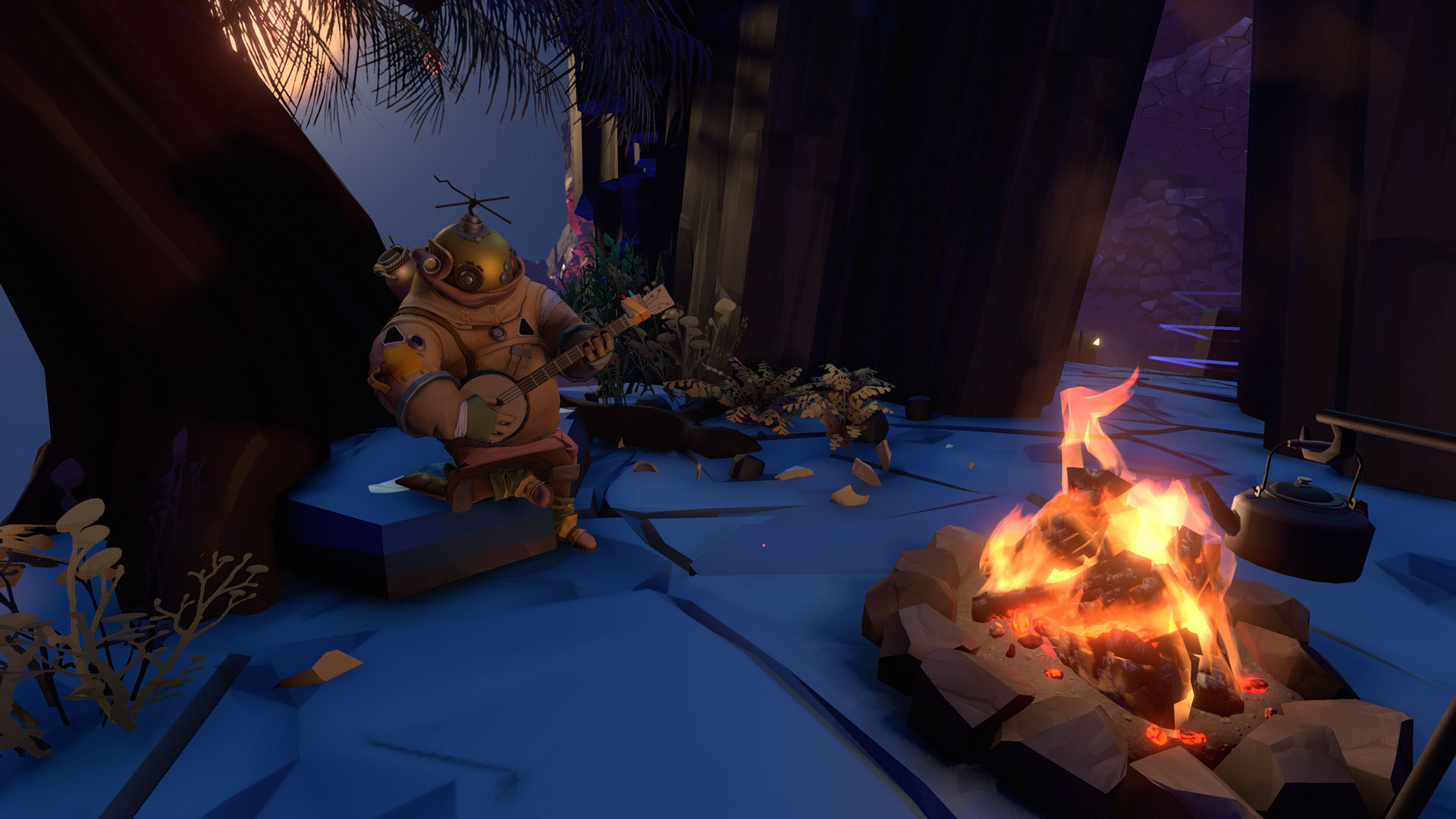 Readers discuss the Achievement or Trophy they most enjoyed getting and what separates the satisfying achievement from the tiresome ones.

The subject for this week’s Hot Topic was suggested by reader Cubby and wasn’t concerned with whether the achievement was difficult or not, but whether you enjoyed getting it and how much effort you had to expend to unlock it.

Most people did have a favourite but, surprisingly, it wasn’t always in a game they particularly liked, with even bad games having good achievements.

Wild achievement
Although I’ve found certain Trophies that just ask for 100% completion to be very satisfying as long as the game’s objective system is compelling, my favourite recent Trophy is probably ‘Hotshot‘ in Outer Wilds.

Without spoiling anything, there’s a space station that’s very closely orbiting the sun and, as a result, is moving at a very, very high speed. There’s an easy way to access the station, which the story leads you through, but the Trophy challenges you to manually land on the station. Even if you manage to match its orbiting speed, landing your craft, safely exiting and getting inside is immensely tricky and you’re likely to overshoot and fly right into the sun more often than not.

Aside from the game encouraging me to play with its impressive physics and control systems in this way, without any gameplay related reward, the thing that I enjoy most about it is the way everything works in real-time.

The game is genuinely a full, seamless mini-solar system where all events, whether on a planet’s surface or on a celestial scale, unfold like clockwork. Just waking up, walking to your ship, taking off and flying to the centre of the solar system in real-time works very well, and constantly doing that only to be instantly vaporised minutes after resurrecting reminded me of Bill Murray waking up and hopping into the bath with a toaster.

I also liked another novel Trophy that involved fitting the entire solar system in a single photo frame. You basically need to fly deep into outer space, so all visible matter is nothing more than a single little dot and then get your camera out. Just good creative ideas that involve experimenting with the brilliant systems underpinning an ambitious game.
Panda

Platinum Nightmare
I’ve never been much for Trophy hunting, a lot of them seem like a way to artificially add replayability or difficulty, it’s like shoot 100 enemies in the head while wearing the ultra rare blue hat and standing on one leg type of thing.

The only exception and the Trophy/Achievement I’m really proud of getting is the platinum Trophy for Bloodborne. My story with Bloodborne is like a lot of people’s. I didn’t like it at all the first two or three times I played it, but once it clicked it quickly became an obsession.

I didn’t set out to get the plat, it just sort of happened. I got most just playing through the game naturally and after a certain point I really wanted to 100% the game.

It wasn’t easy, and some of it was a nightmare, I’ve never been able to beat Martyr Logarius on my own, I’ve needed help every time; same with the Headless Bloodletting Beast, but all the rest I beat on my own. I also didn’t enjoy having to fight the Abhorrent Beast twice in two different chalice dungeons.

Getting that last Trophy for the Pthumerian Queen was like pulling teeth. I did okay until I got to the cursed and defiled chalice dungeon. I took me a few tries to beat the Watchdog of the Old Lords and I thought everything was going to be okay.

Then I ran straight into the wall that was the cursed and defiled Amygdala. I was unable to find anyone to help me via jolly co-op and I had to deal with her by myself.

I easily beat her in the Nightmare Frontier but this was another thing entirely, it took me over 100 attempts to beat her, it was actually a lot more. She had beat me into the ground many times before I started to keep count of my attempts. In the end the only way I could beat her was by going away and grinding until I could max out Simon’s Bowblade and kept away from her while shooting at her head every chance I got. I didn’t enjoy that fight at all.

After Defiled Amygdala the rest of the bosses on the way to the Queen were not too difficult, and I managed to beat the Queen herself on my first attempt.

I’m very proud of my platinum for Bloodborne because of what I went through to get it, but I can’t say I enjoyed the chalice dungeons all that much. Sme of the bosses seem really cheap in hindsight. I know a lot of players hate the Watchdog of the Old Lords for being a cheap boss. But it’s the only platinum Trophy I’ve ever gotten and it’s one I’ll never forget.
Mitchell

Silly names
If you’d asked me five years ago about Trophies I wouldn’t have been bothered by them. As someone who always plays a game on easy, to just enjoy the adventure, I was always put off trying for them, as a lot of games have Trophies for completing the game on hard difficulties.

My gaming style has changed over the last few years though. I still play games on easy, just for fun, but if I really enjoy a game I will try an obtain all the Trophies for it (single-player only as I don’t play online).

Over the last few years I’ve racked up a respectable count of 25 platinums, most of which have difficulty related awards or ones that require you to play a certain way, e.g. the no kill/no alarm playthroughs of Dishonored.

I don’t get the idea of playing games like My Name Is Mayo just so you can get an easy platinum. If you really enjoy tapping various types of jars of mayonnaise well good luck to you, but just to get a platinum?! I think that’s a bit pitiful!

Naughty Dog have had some silly Trophies with equally silly names that have made me laugh. Hitting bad guys in the market in Uncharted 3 will earn you ‘He’s Gonna Need a Sturgeon’ and getting some dolphins to follow your boat in Uncharted 4 gets you ‘On Porpoise’!

The platinum Trophies I’m the proudest of are also the ones that required the most amount of time and effort:

Far Cry 3 on PlayStation 3 – not the hardest lot apart from the co-op ones, as I didn’t have anyone to play with at the time, so I did it split screen using two controllers. As someone who struggles with hand-to-eye coordination with just one controller juggling two wasn’t easy for me!

Devil May Cry – over 18 years after I first completed it on PlayStation 2 I finally managed to complete it on all the difficulties including Dante Must Die!
LastYearsModel

Story achievement
So – favourite achievement, eh? To be honest I’m not that fussed about achievements – I’m certainly not an achievement completist! As a result, for me there is one achievement that I love, because it really made me laugh.

The game? The magnificent Stanley Parable (this game made me laugh more than most comedies – a rare achievement for a game).

Personally I loved this game, it’s also really short, so I would definitely recommend it to anyone who hasn’t played it.

There is also another achievement in another game, Where The Water Tastes Like Wine, where you can’t get the final achievement (at least on the PC version) called ‘Where The Water Tastes Like Wine’. This was a decision by the games makers as they wanted to drive home that the end of the game is not a resolution to the story (the game is all about stories, what they mean and how they change).

Apparently, to release it on console they had to unlock this achievement – so if you’re a completist and like the sound of a slow, ponderous, overly long game that you walk really, really slowly around America telling stories probably best to get the console version! (I gave up on it – it was just too slow!)

As ever – whether you like achievements or aren’t bothered – have fun y’all!
The Dude Abides

A winner is you
The bloody last boss in Sekiro: Shadows Die Twice. I don’t pay much heed to Trophies/Achievements, but I sometimes check this one to make sure it wasn’t some fever dream and I actually did it.

It is, to quote the game, the battle memory of an extraordinary foe.
ANON

Switch off
I have to admit, as an old school gamer, I really don’t care about achievements or gamer scores. I actually find the pop up notification to be annoying and rarely stop to check which achievement I’ve got.

There should be a traditionalist mode where you can turn all that nonsense off.
Russell

GC: There is, it’s in the dashboard settings.

Slow wind
Achievements stopped the world of gamers using cheats to complete games and added more value for money. Nearly every magazine or video game shop had cheat discs to help get you through a tough game or ones you just could not be bothered to complete.

Achievements and Trophies changed everything, as these mechanics could only be unlocked by doing everything by the book and cheating did not work. So it basically made you a better gamer to achieve the glory of a platinum Trophy, etc.

I never would had completed Final Fantasy 13 or have got the maximum pleasure from it, since it’s a rather mediocre Final Fantasy game which then worked you to the bone to complete all these awesome Trophies. The Treasure Hunter trophy was definitely the most challenging and one that might as well have been done before any of the others due to the precision collecting of the items needed to gain the award.

I photocopied pages and pages, plus saved wiki guides on my phone, to correlate what items I had and all the different tier weapons for all the characters needed! Also, all accessories had to be found for the award and the Champions Badge was the last one I got.

A bit of a grind but after all my research the Trophy was mine. Getting the rest of the Trophies was a breeze really! Well, a breeze which went on and on and on until the platinum was gained in a serotonin type of ecstasy moment! Still, good times and I got my money’s worth from this eventually great game. Just took a lot of time and effort.
Alucard