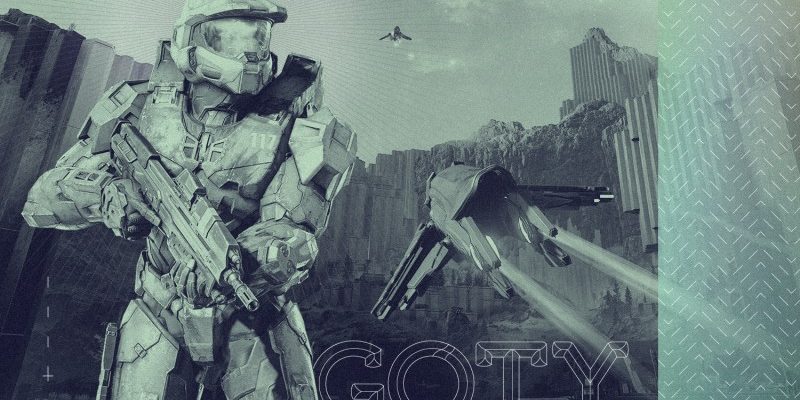 Halo Infinite is an epic return to form, a sequel that feels decades in the making. Within minutes of playing the campaign or multiplayer, nostalgia hits hard, and the title reminds us why Halo is one of gaming’s most important series. Infinite is easily developer 343 Industries’ best Halo game to date, an effort that honors the series’ 20-year legacy while blazing a new trail forward for Master Chief and the Spartans. No matter what mode you dive into, the gameplay delivers the iconic “feel” that made the series’ first entries hard to put down and expands upon it in a variety of excellent ways. Whether you are exploring a sprawling open world with Master Chief or are teaming up with friends for an intense battle in ranked play, Halo Infinite is a masterwork that pumps out excitement, making it an easy choice for Game Informer’s Game of the Year for 2021.

We asked Game Informer staff members to weigh in on why they love the flagship first-person shooter so much.

After two entries with large casts and complicated fictional frameworks, Halo Infinite narrows its story lens, returning the series to a narrative flow reminiscent of the original Combat Evolved. The gambit pays off with a focused and straightforward story about hope, resilience, and moving on from the past.

Intense, emotional writing and excellent voice performances are critical to the success, elevating the conversation past sci-fi cliches and giving real heart to the otherwise action-packed affair. It doesn’t hurt that Halo Infinite features one of the best original scores in recent memory, adding pathos, excitement, or tension at just the right moments.

Jen Taylor’s voice performance work deserves special recognition, as she seamlessly shifts between three distinct characters, each with subtle distinctions that set them apart while maintaining the underlying connections between them. The new Weapon character is charming and childlike, without crossing over into being annoying. That helps keep some fun and brightness in a plot otherwise focused on killing and conquering.

Halo Infinite’s story feels like the start of something new, and at times skirts the line of keeping a few too many mysteries under wraps. But there’s no denying that by the time the credits roll, there’s a lot to be excited about learning in the future.

Music Is At The Heart Of The Game

Halo is notable for many things, but one aspect of it that has prevailed positively through the best and worst of Halo games is the score. If you’ve played Halo before, you’ve undoubtedly hummed the central choral theme in a bathroom somewhere, and if you haven’t, you should. The moment you boot up Halo Infinite, that familiar theme begins, and it feels like 343 Industries and composer Gareth Coker saying, “you’re home.” What’s better is that what feels familiar at first grows to become something new, a score with as much staying power as the original we’ve all been humming for decades.

Coker uses the legacy of Halo Infinite’s music to create something new, and it feels effortless. Musical sci-fi glimmers accompany campaign missions and say, “sit back and enjoy this cutscene because you’ve earned it.” The semi-open world of Zeta Halo is full of marching snares and beating rhythms that feel as powerful as the Chief’s growing strength over the Banished. Players can enjoy a suite of melodies, strong vocals, and drums that beat through every punch and bullet for the entirety of their journey, too.

The way Coker’s composition allows for room to take your time, weaving in different strings, woodwinds, percussion instruments, and more throughout it all, is a feat unto itself. Infinite’s score is as memorable as those that came before it, which speaks to the long-running importance of Halo’s music. Master Chief is the hero of this story, but music is at its heart, much like previous entries.

Halo Infinite delivers the intense corridor firefights we’ve come to expect and also opens up more than we’ve seen in the past with sprawling open-world sequences. These biomes show off the vast scale of the conflicts and open up new paths that lead to additional storylines, upgrades, and secrets galore. Players who veer off the beaten path will face some of the game’s most challenging and rewarding battles against named targets. Being able to travel great distances in remarkable vehicles – like the Warthog or Banshee – is a fantastic experience. Running on foot is also excellent, thanks to Master Chief’s new Grappleshot, a fun device that you can use to swing across the environment. The open worlds are nicely designed and are yet another area where 343 Industries achieves a nostalgic feel while giving players something new to enjoy.

The Best Movement In The Series

Halo Infinite features the most fluid movement in the series to date. The sprinting, sliding, and clamber mechanics from Halo 5 survived the cutting room floor but feel improved in their new iterations. The game also feels faster than its predecessors, helping to link basic movements amidst heated firefights. The core movement system is excellent, but the Grappleshot and Repulsor are responsible for Infinite’s most compelling traversal mechanics.

While you can use the Grappleshot to swing across each arena like a playground, the gadget has other uses, too. Latch onto a flying vehicle like the Banshee for a cheeky hijack, or hook an unaware enemy to fly towards them and get a melee kill quickly. Skilled players can use the gadget to swipe weapons before other players grab them or steal crucial goals in modes like Oddball and Capture The Flag.

On the other hand, the Repulsor is a perfect showcase of how the game’s physics systems lead to unexpected moments and strategies. The Repulsor produces a shockwave that can send players flying away, but many of us discovered we could use the device for much more during the game’s release week. It can return rockets, grenades, and other explosives to whoever shot them. I’ve even killed a player by launching an idle Warthog into them mid-air like some sort of armored Jedi. Still, surprisingly, you can use the gadget to double jump by aiming at the ground, jumping, and engaging the Repulsor. This mechanic creates unique avenues for movement and elevates strategic play to new levels.

The movement options featured in Infinite fundamentally change the Halo experience and remind me why the series’ first subtitle was Combat Evolved.

It's A Sci-Fi Shooting Gallery

A varied, reliable arsenal is the core of any Halo experience. With Halo Infinite, 343 has, in some ways, turned back time to a more classic identity, at least for your Assault Rifles, needlers, and battle rifles. You know what you’re getting with the mainstays, and that’s a massive boon for the overall gameplay. To stay in lockstep with that approach, Infinite allows all weapons – guns, grenades, power weapons, and melee – to feel like valuable tools in combat.

The irreplaceable Assault Rifle is tuned for a near-perfect timing where emptying a magazine will slay a foe or at least get their shields low enough that a quick melee or a shot from the new, capable sidearm will finish the job. It’s a stellar baseline for the weaponry offered, and that old-school Halo feel permeates the other Spartan armaments. It allows new or experienced players to jump in, shoot around, and find the fun of Halo’s combat before exploring the flashier wares of the armory.

Infinite succeeds by imbuing utility into each of the various alien munitions. With nearly every tool at your disposal being a blast to wield, it’s hard to pick just two to stick with at a time. It’s not a bad problem to have and speaks to the breadth of loadout permutations you can choose to complete an objective or suit a preferred playstyle. Stopping a rampaging Banshee from terrorizing the battlefield by shooting it with an electric weapon like the disruptor or Shock Rifle to disable it midair won’t get old anytime soon. Nor will leaning on old standbys like rolling up on a squad of Banished Elites and firing the Pulse Carbine or a charged Plasma Pistol to dispatch their pesky shields quickly. Though, few strategies beat just rushing into a skirmish, slinging grenades, praying for them to stick to something, and swinging wildly with a gravity hammer. You may not make it out alive, but it’s a damn fun way to rack up some kills.

Each strategy feels distinctly like Halo, providing a sandbox-like shooting gallery to explore and experiment in. While this philosophy isn’t new to the series, it feels like a breath of fresh air and stands out against other first-person shooters this year.

Multiplayer Is Back From The Dead

Halo multiplayer is known for many things but in particular, its dance. A ballet of bullets and battle rifles, players have always fallen in love with the series for the hypnotic way Spartans and Elites duel it out. You’re never out of it until the very last moment, and it’s been a high watermark for multiplayer shooters since its origin on the original Xbox. However, that tango has felt more like an awkward dance at your aunt’s second wedding than a beautiful ballet in the last decade. Every game since Reach left something desired from its PVP offerings, which is unfortunate for a series known for revolutionizing how console users play online. Infinite simplifies the formula and has blown me away by producing the best competitive space of 2021.

We talk a lot about how Halo feels, and it seems as though 343 Industries has finally figured out what that means. Infinite strips itself down to the very foundations of Halo. Gone are the armor abilities and load-outs that tilted and complicated the meta. Do you want a battle rifle? Good, it’s right next to the bridge through a sea of grenades and angry teenagers – Godspeed. Everything from power weapons to Overshields is on the map in Infinite, which levels the playing field and makes it fun again to simply wield an AR and pistol and not feel poorly about your KDA. Also, Sprinting feels natural for the first time, thanks to the design of the maps.

Theaters of destruction such as Live Fire and Streets are perfectly compact and feel like a natural fit for both walking and running, especially juxtaposed against some of the maps from Halo 4 and 5. Even the larger Big Team Battle maps such as Fragmentation and Highpower walk the fine line of being impressive in scope but focused enough to keep players locked in on the action and not hopelessly wandering around looking to find someone. Combining these elements, 343 has made a statement with Halo Infinite that it’s learned from its past and proving it can choreograph a timeless dance that players won’t soon forget.

Those are a few of the reasons why we selected Halo Infinite as our 2021 Game of the Year. If you disagree, that’s totally cool! After all, there were many amazing games published throughout the year. If you’re wondering which other games we loved or you’re looking for video game recommendations, be sure to check out our list of the Top 10 Games Of 2021.

Is Halo Infinite your favorite game of the year? If not, which game is your personal pick? Let us know in the comments below!