After 25 years of existence, there's plenty of variety between the ever-increasing amount of Pokemon in the popular franchise, with all the various designs being able to be described in a near-infinite number of ways. Every Pokemon is somebody's favorite, but we still have to admit that many Pokemon are just weird and have been ever since the release of the first few games in 1996.

In the fourth-generation games, Pokemon Diamond, Pearl, and Platinum, a handful of new weird Pokemon were introduced, with some being related to previously introduced Pokemon, and others being completely new to the series. Here are the strangest ones. 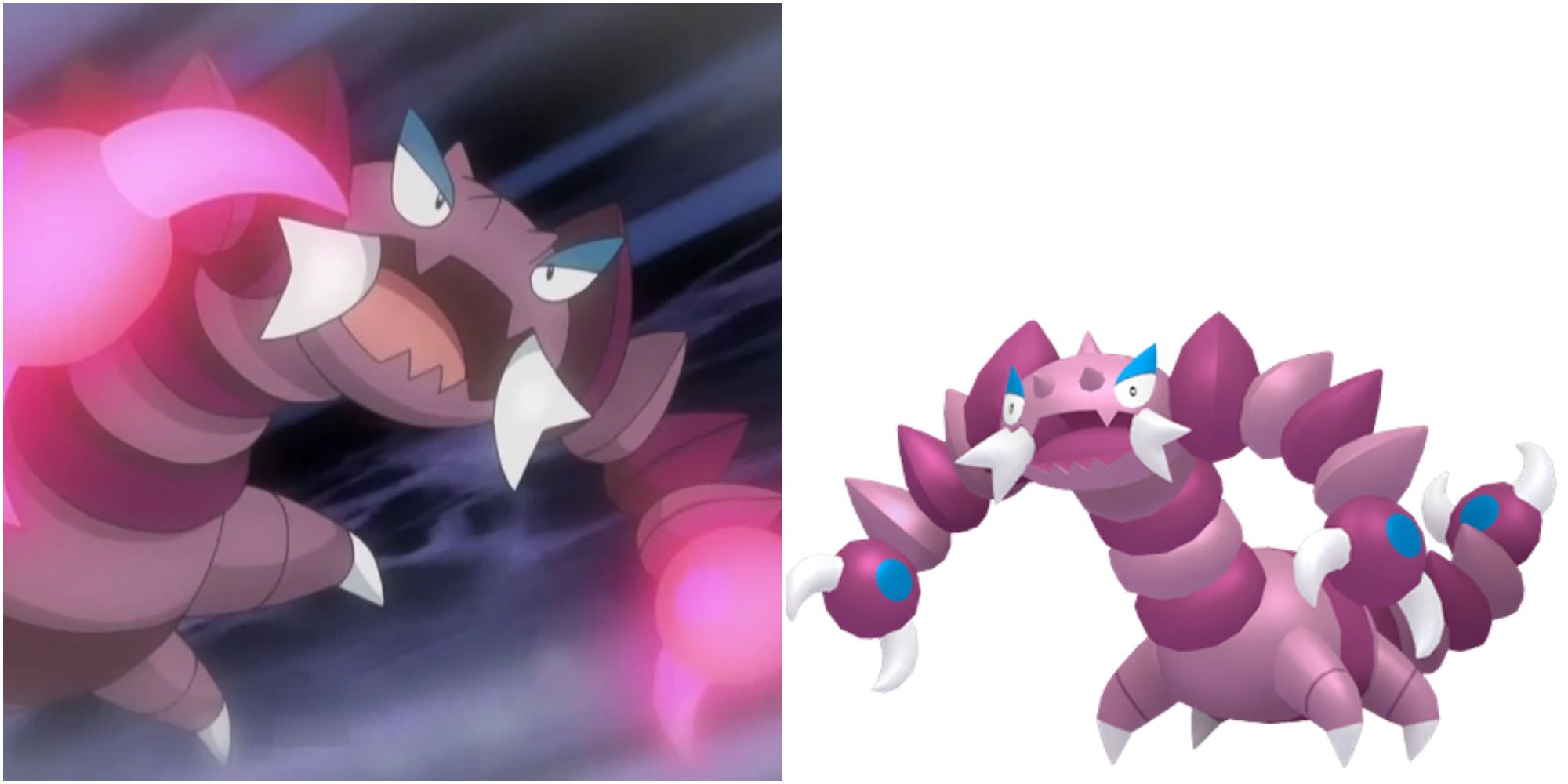 Drapion is one of the coolest brand-new Pokemon introduced in Diamond and Pearl. It's a Dark and Poison dual-type – essentially a giant scorpion – and it's so strong that it can turn cars into mere scraps.

Unfortunately, its segmented body makes it look like a giant purple accordion, and it weirdly lacks any other notable details. It's also known as the Ogre Scorpion Pokemon, but the ogre part has never been explained in any of its Pokedex entries. It is known as the Sand Demon, so maybe ogre is just used as an interchangeable term. 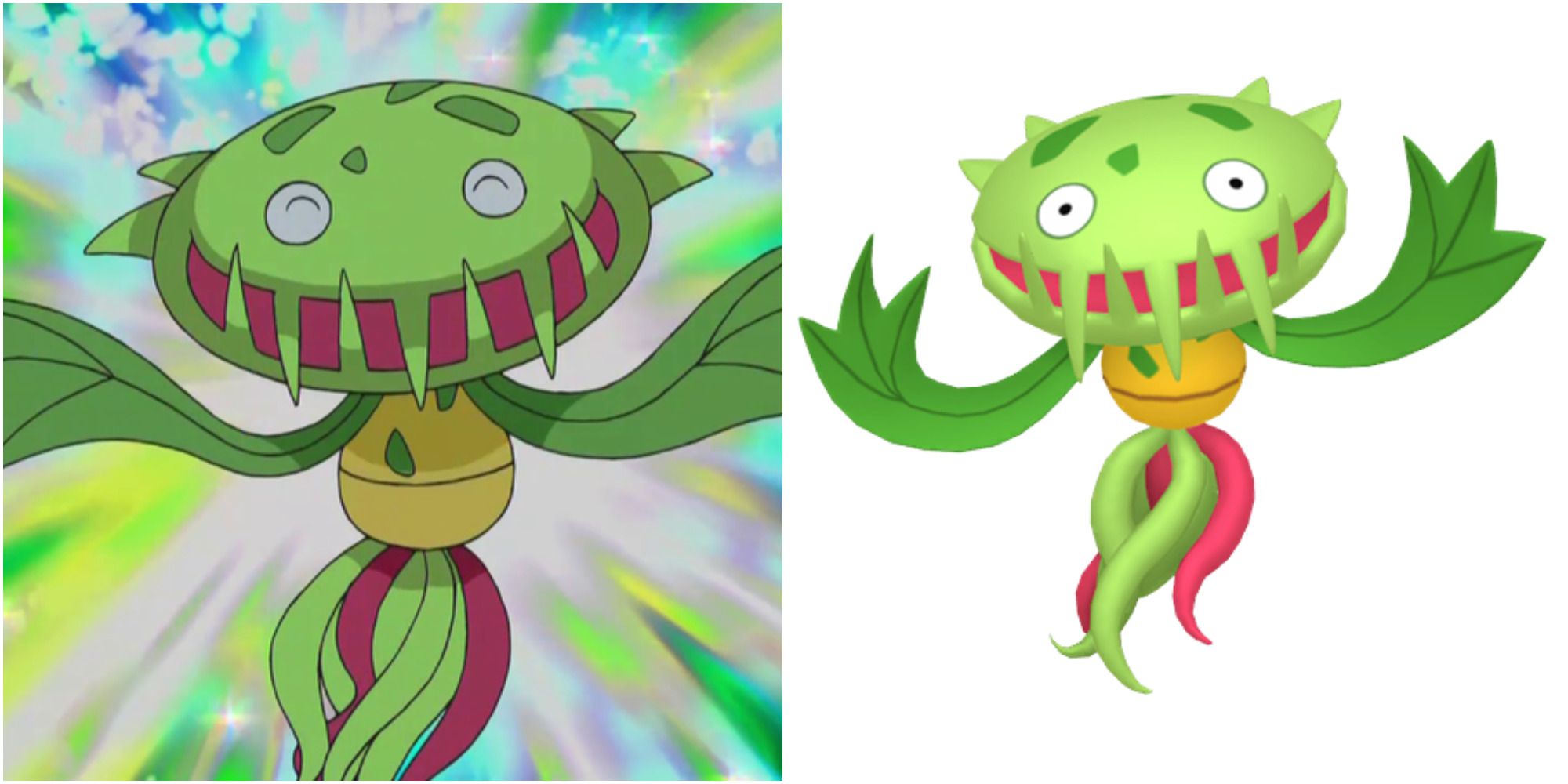 Unlike many other Pokemon introduced in the fourth generation, Carnivine does not evolve from or into any other Pokemon. Multiple in-game Pokedex entries describe Carnivine as a venus fly trap that can walk, which for a Pokemon doesn't seem all that strange of a concept since the similar Pokemon Victreebel was introduced three generations prior.

Carnivine's eyes and mobility help make it more distinct, but they're also the reason it's weird as they make it look like it could easily fit in as a type of enemy in a cartoon 3D platformer. Hopefully, Carnivine won't be encountering Mario any time soon. 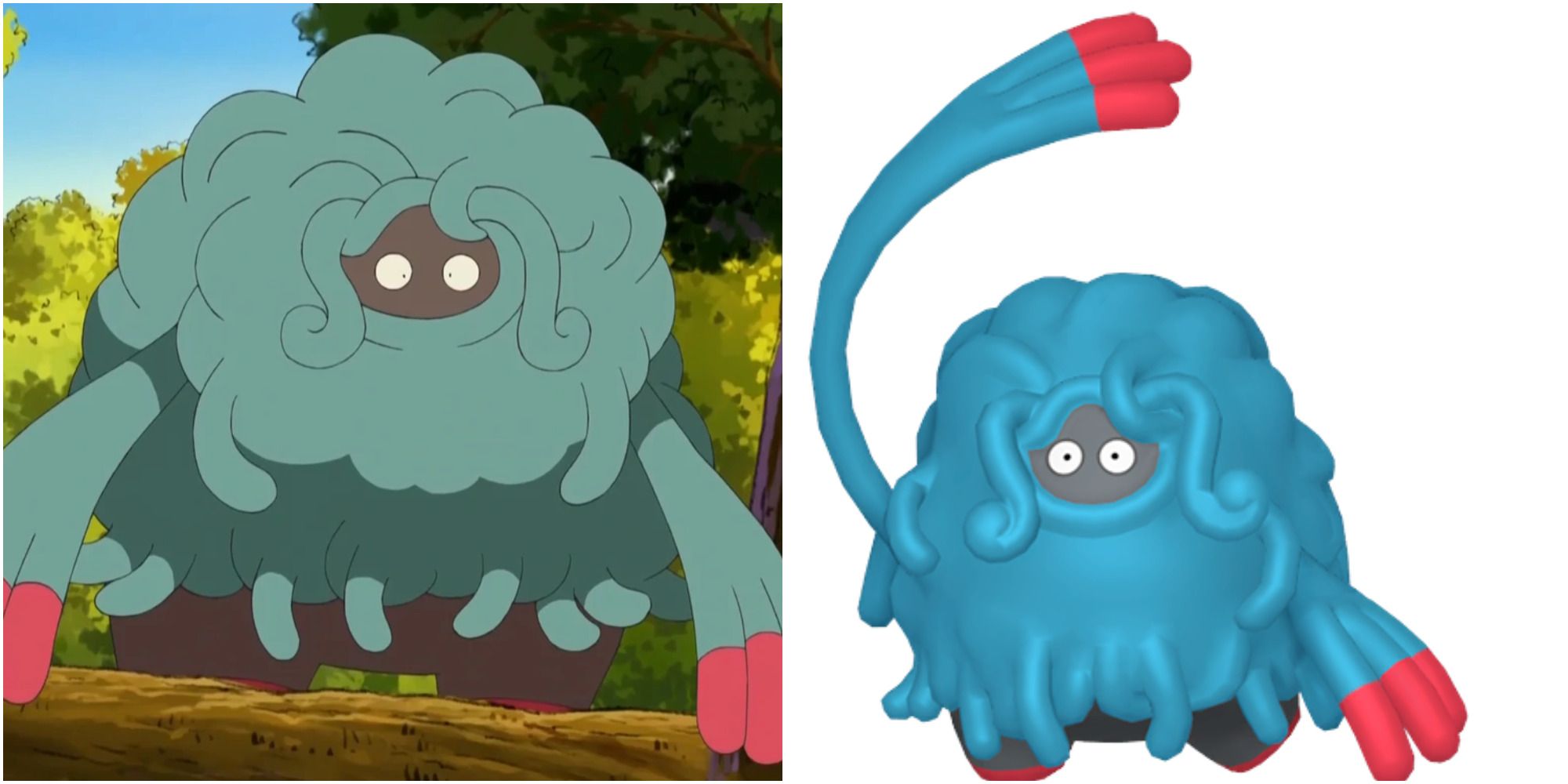 Tangela, the spaghetti ball of blue vines with shoe-like feet, was already a strange concept for a Pokemon, but its evolved form Tangrowth is even weirder.

Tangrowth is an even bigger mass of vines with feet that are more like hooves than shoes. Its arms are just bundles of vines that it can extend as much as it desires, and the limits to how far they can grow have never been specified. While it's still not known what's under the vines, at least the Tangrowth we know today doesn't have a disturbing smile like the Pokemon it could have been. 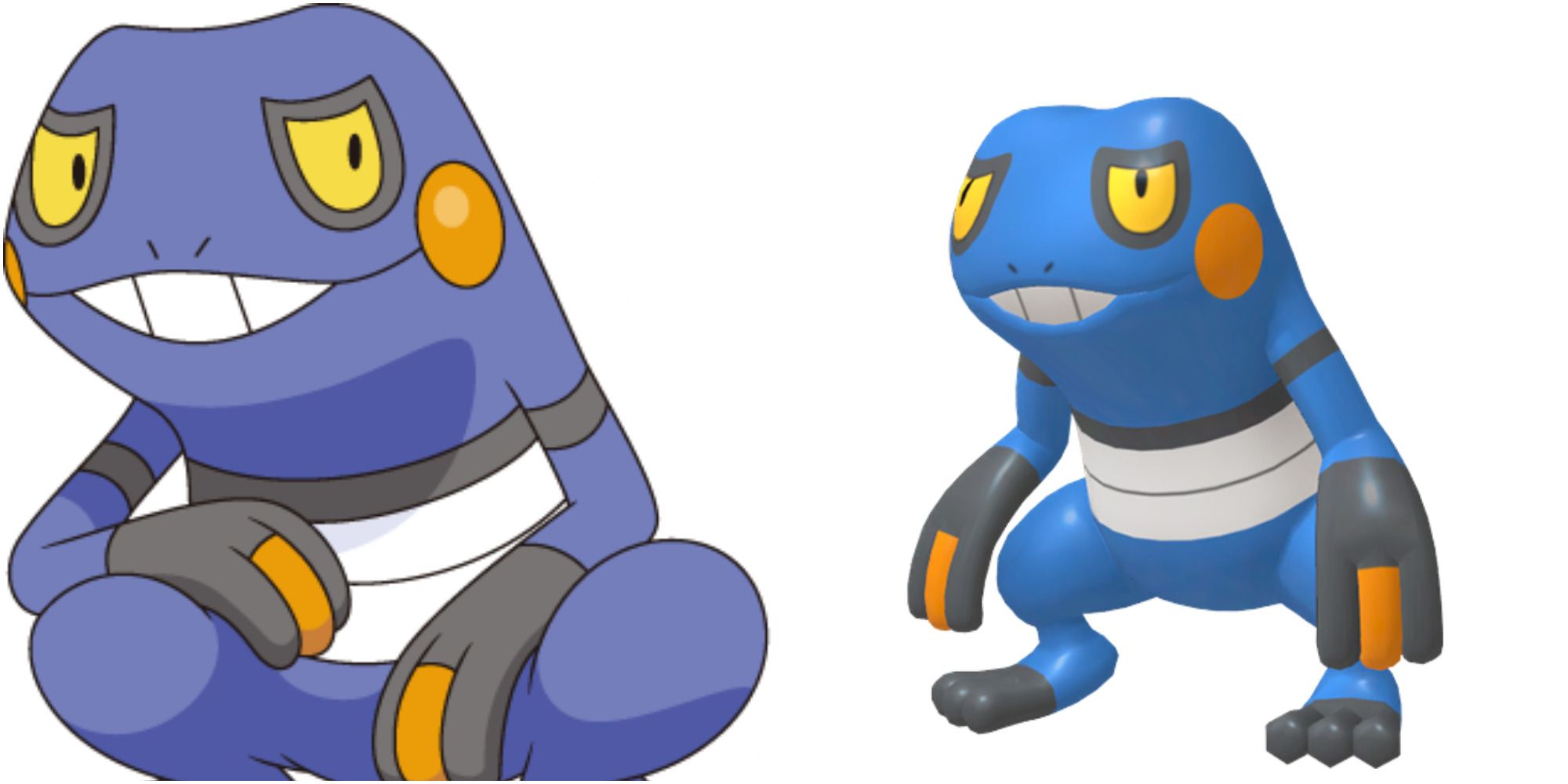 Poison and Fighting is an interesting type combination, but Croagunk deserved a slightly less weird-looking design. Its facial expression is the biggest problem, with its teeth always showing while at the same time having an emotionless stare coming from its eyes.

It has also been described as stabbing distracted opponents with its fingers. Luckily, this is a survival tactic, so Croagunk won't just go out of its way to poison any other nearby creature with its fingers. Despite its weird face, in the Pokemon world, Croagunk seems to be a popular mascot, particularly in Pastoria City. 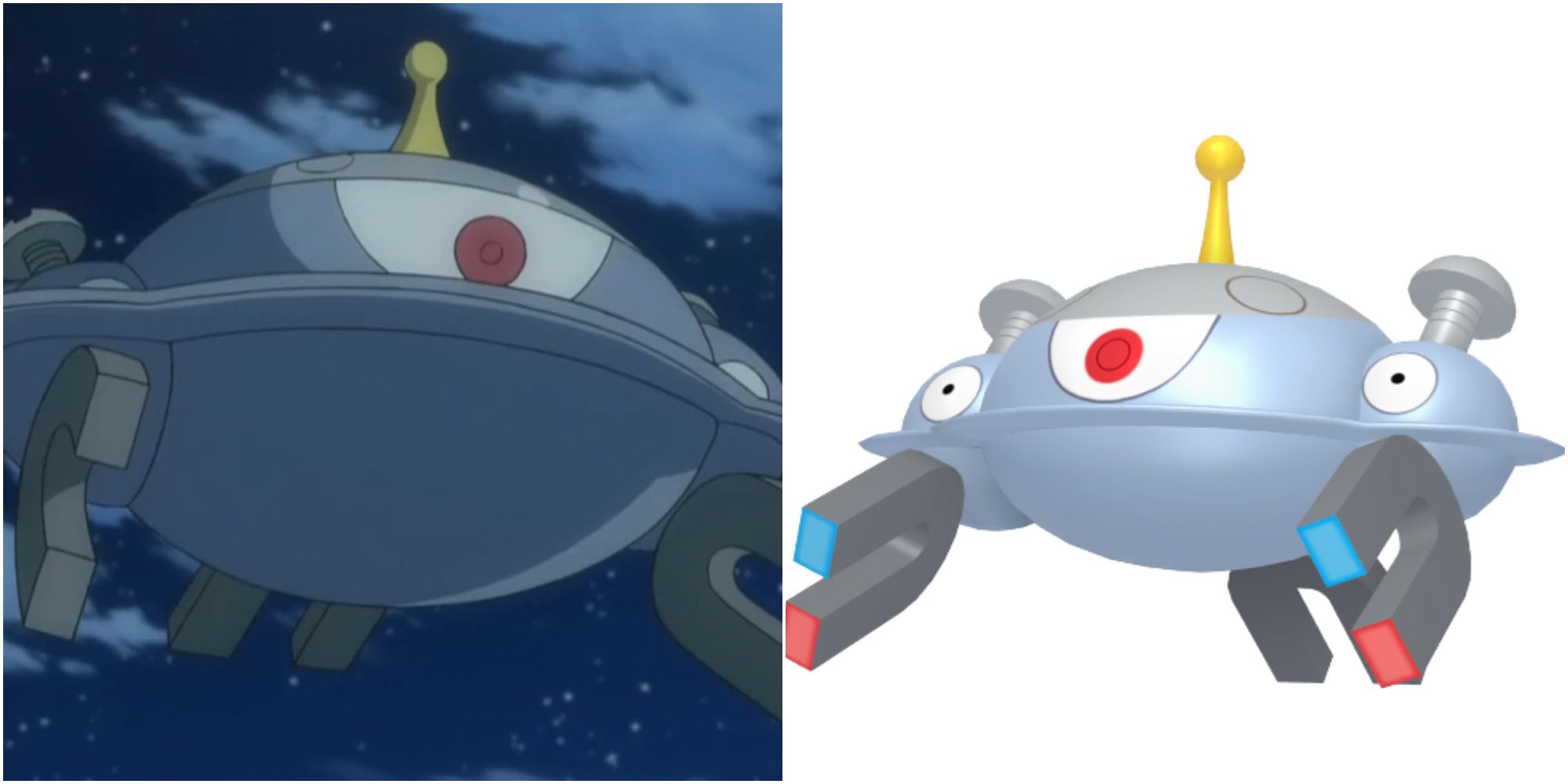 While the living magnet Pokemon Magnemite and Magneton were strange when they were first introduced in the first generation games, the third stage of this family, Magnezone, is even weirder and feels like a step in the wrong direction. Magnezone seems to be a Magneton that eventually fused together due to exposure to particular magnetic areas. 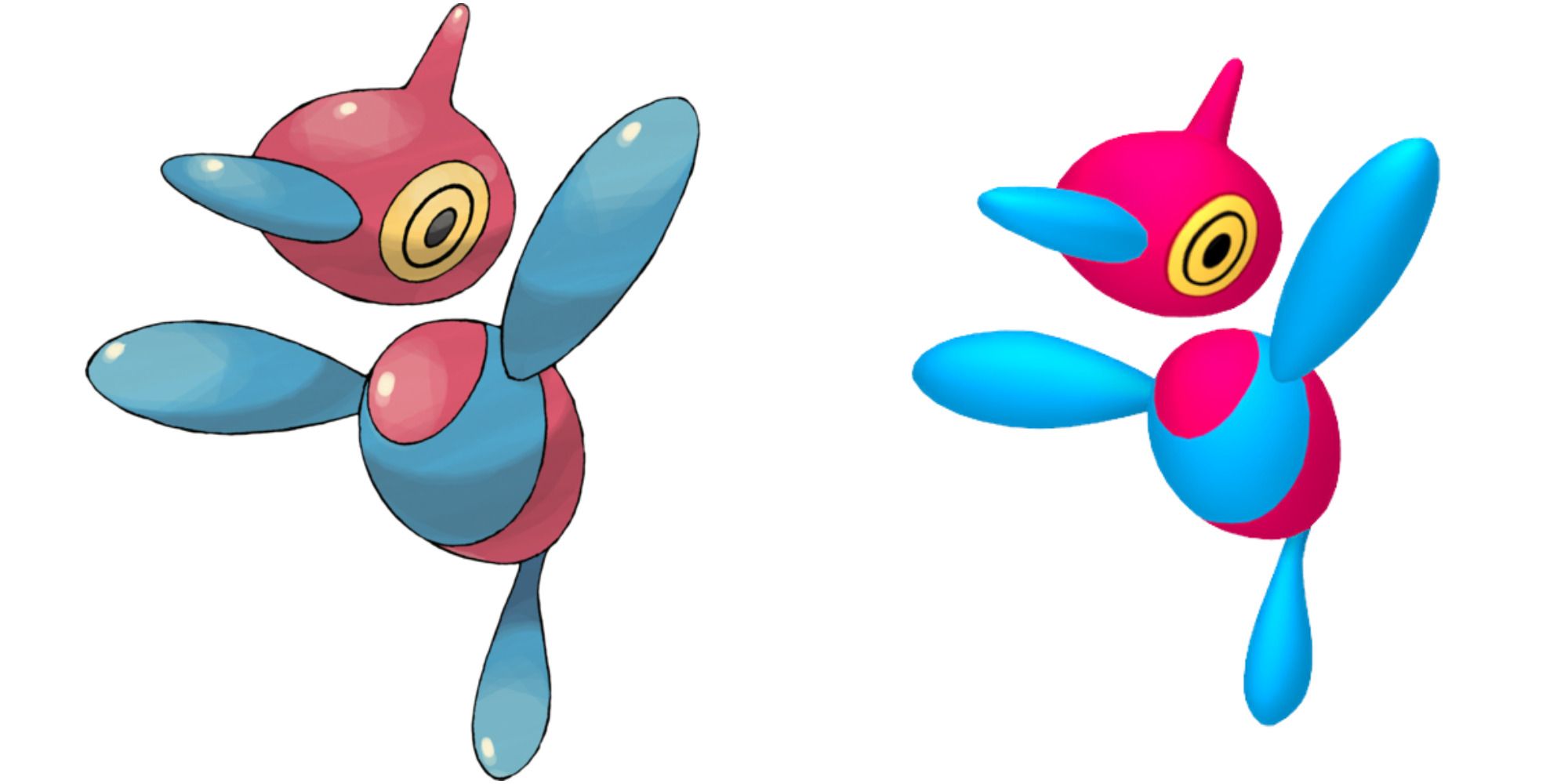 Because of their traversal abilities, the artificial Pokemon Porygon and Porygon-2 are fascinating creatures. However, the fourth-generation evolution of Porygon 2, Porygon-Z, wasn't so lucky and is much weirder.

Porygon-Z was meant to travel between dimensions, but the software that was supposed to enhance its abilities ended up making its behavior unstable. This behavior also makes it a frustrating Pokemon to research, and it seems that any unique abilities it has have not yet been discovered due to this. Porygon may be the first artificial Pokemon, but Porygon-Z is the first artificial Pokemon to officially be considered a failure. 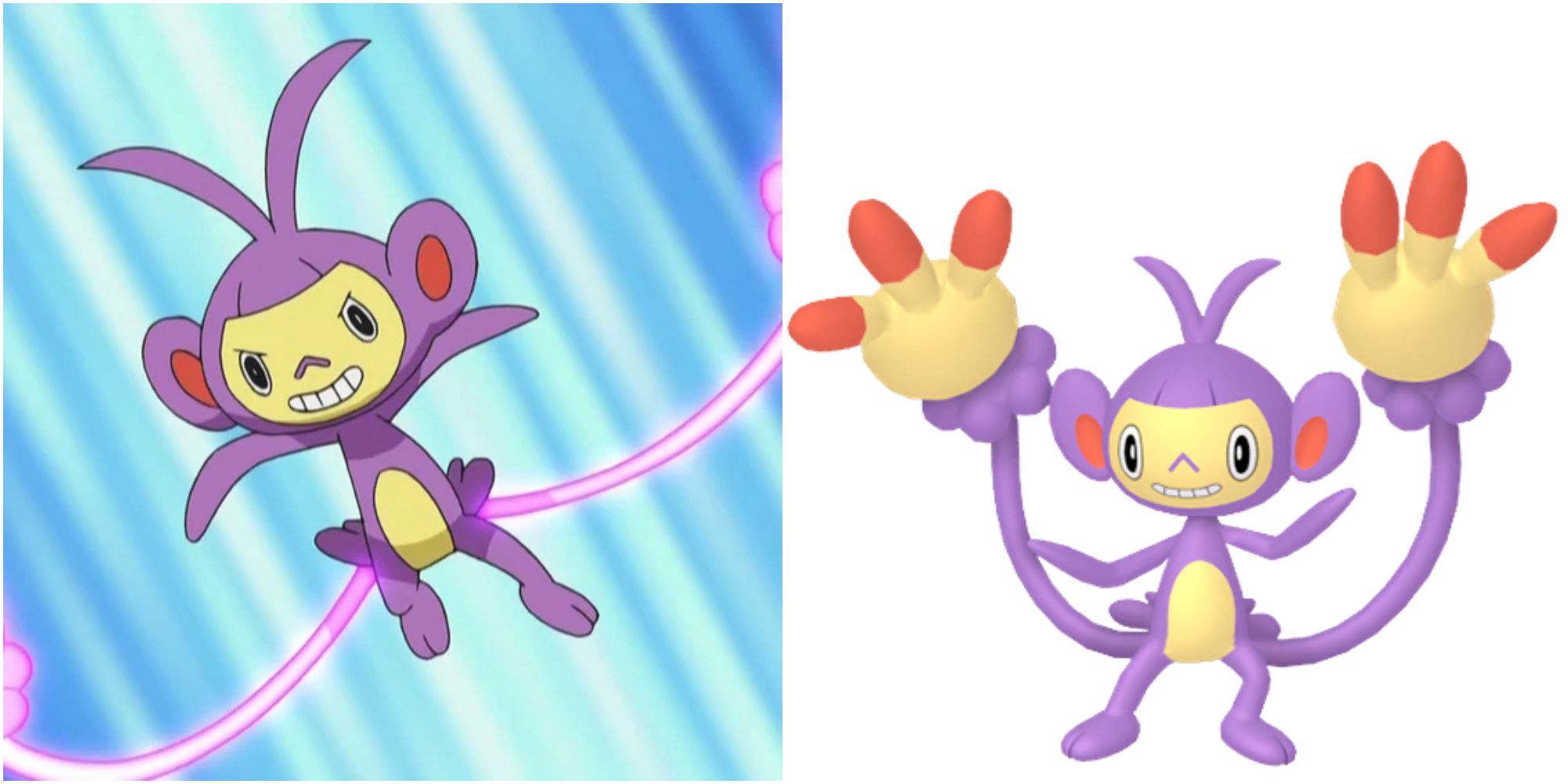 When first introduced in the second generation, Aipom was only a little unsettling because of its large and constant smile. Aipom's fourth-generation evolution Ambipom is even weirder thanks to gaining a nose and a second tail. Similar to how Lickilicky uses its tongue for everything, Ambipom uses its tails for everything, which is notably less disgusting even though its tail hands look like Miltank udders.

As previously mentioned, Ambipom also gains a nose strangely never mentioned in any Pokedex entries. One would think adding features that make Pokemon more similar to real-life animals would make them less weird, but that is not the case for Ambipom. 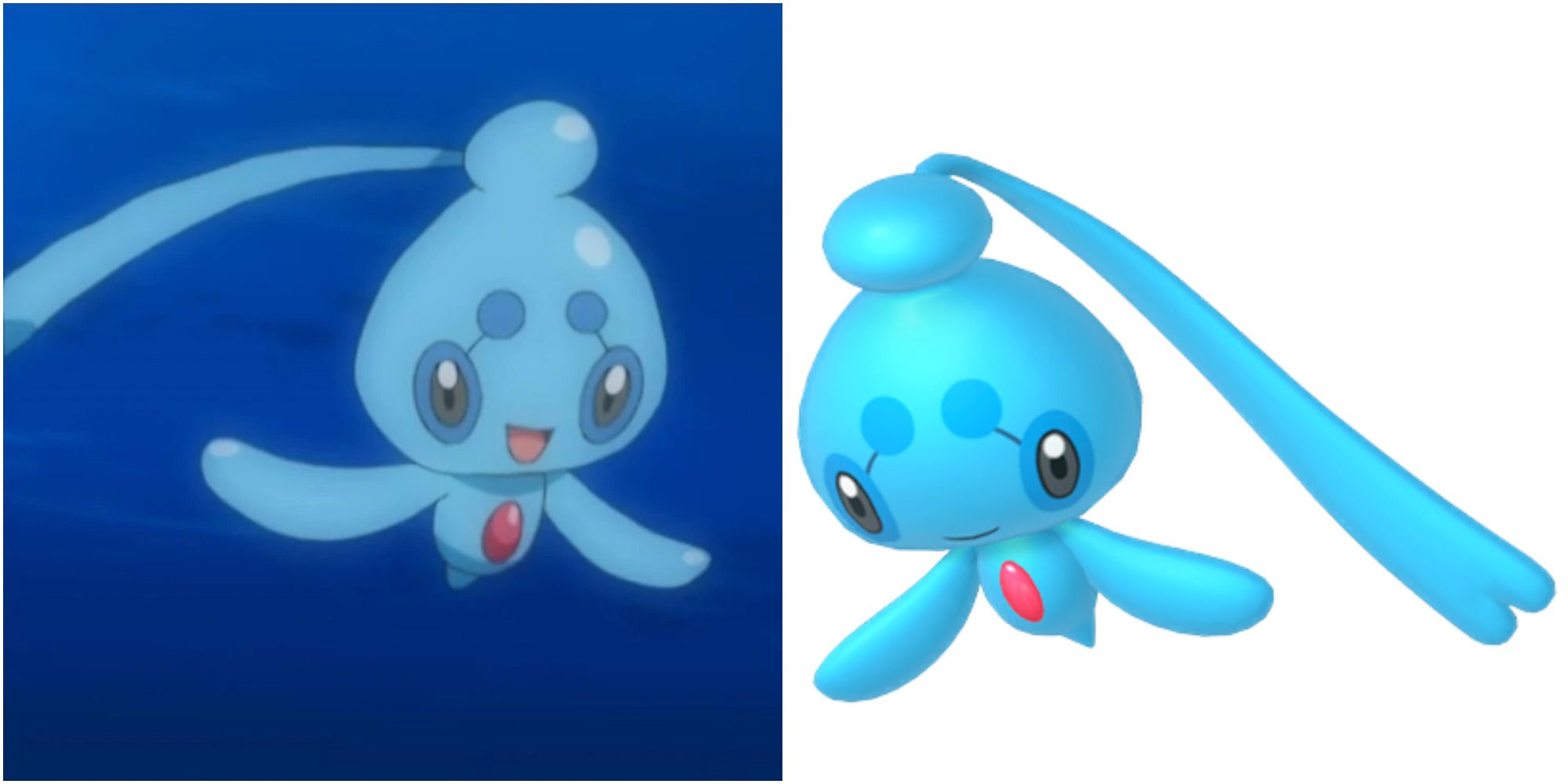 Pronounced similar to phony, which is clever given its heavily debated status as a mythical Pokemon due to its relation to Manaphy, the Sea Drifting Pokemon Phione isn't weird in terms of its appearance or what it does, but more so because of its general existence and how it's obtained.

Phione can only be obtained by breeding a Manaphy with a Ditto or by breeding another Phione with Ditto. Why Manaphy can do this has never been explained, and Phione and Manaphy have also never been seen together in any of the games or anime despite being related. 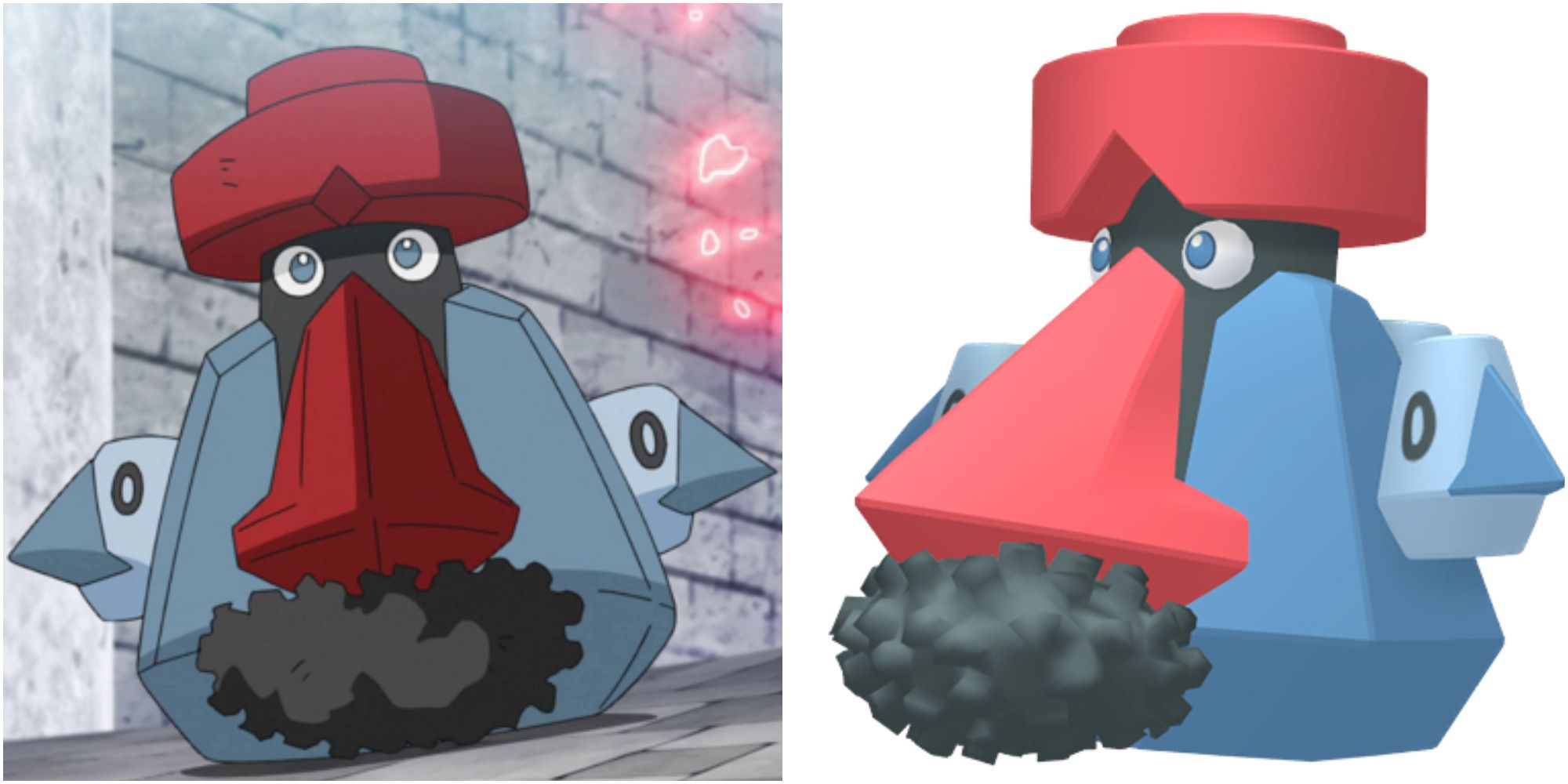 When first introduced in the third generation, Nosepass was strange but introduced early enough as a new rock-type Pokemon that it wasn't all that notable otherwise. Probopass, its evolution introduced in the following generation, is much weirder and perhaps even unnecessary. Those appendage-looking things on Probopass' sides aren't arms; they're "mini-noses" that it can control using magnetism, and its mustache is made out of iron filings.

The moai influence of Nosepass was already apparent, so why not just make a gigantic moai head Pokemon and leave it at that? Probopass will never be able to pull off the hat and mustache look as well as Mr. Rime does, no matter how much it wants to. 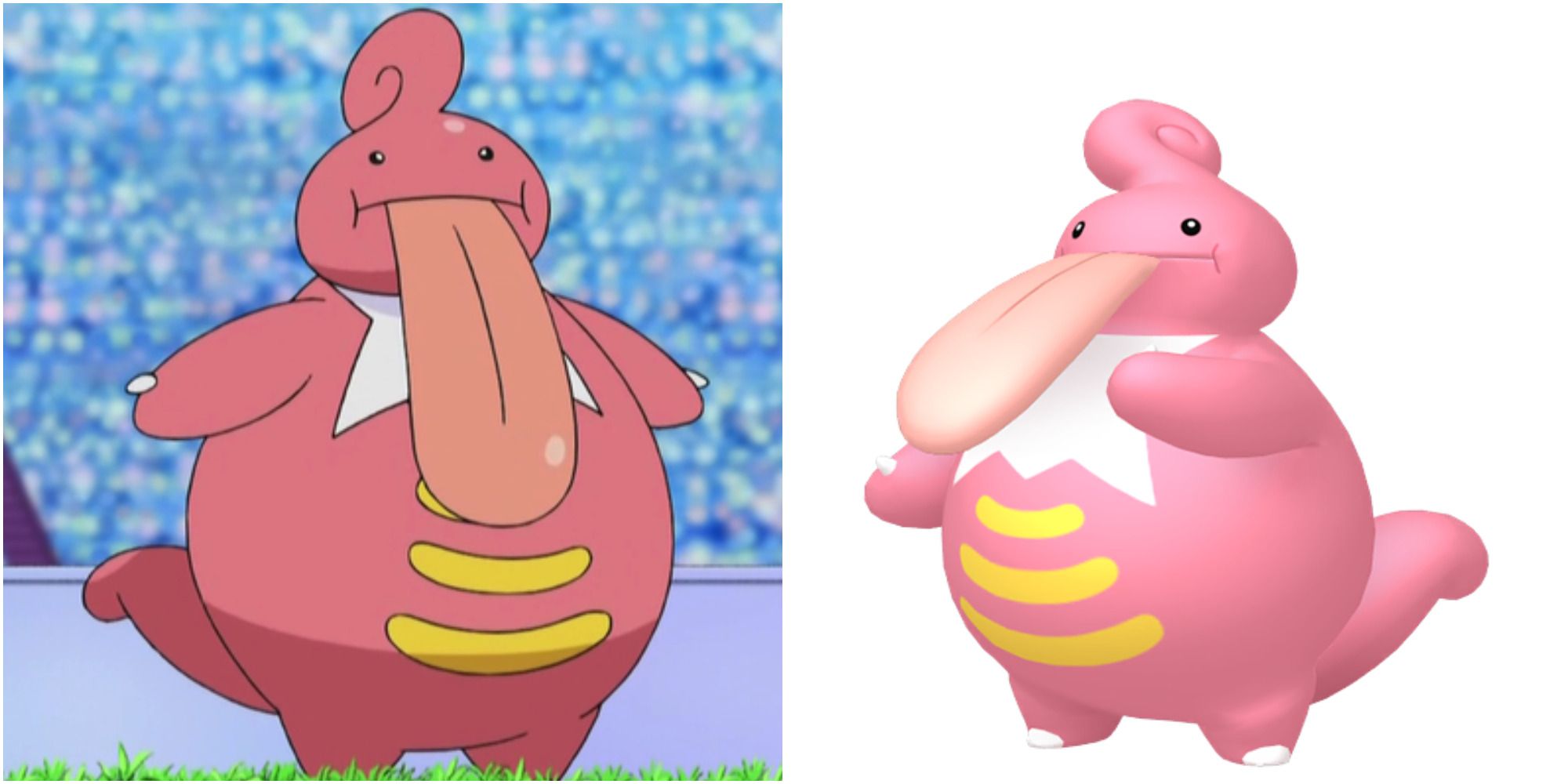 Lickitung was already a weird Pokemon when it was introduced as one of the original 151 from Pokemon Red and Blue version. About a decade later, Lickitung's evolution Lickilicky was introduced, a Pokemon that in some ways is even weirder.

Saliva from Lickitung's tongue is said to cause a tingling sensation and eventually cause rashes if not cleaned off, while Lickilicky's saliva can not only cause numbness that never disappears but is also capable of dissolving anything it comes into contact with. Lickilicky also uses its tongue for most things other creatures would use their hands or feet for, which is just plain disgusting.