World of Warcraft Dragonflight saw a complete overhaul of all the classes, and one thing’s for certain: they look pretty great. Thanks to this expansion’s (current) lack of borrowed power, WoW has become significantly more alt-friendly, opening up the game so that you can genuinely play as many classes as you want without many, if any, inhibiting factors.

While Shaman generally got some of the best improvements throughout Dragonflight’s beta, Enhancement Shaman, in particular, is in a wonderful spot. Between how fun and fluid the class is to play and how many options it has across both its main and Enhancement talent tree, this specialization truly shines in Dragonflight. 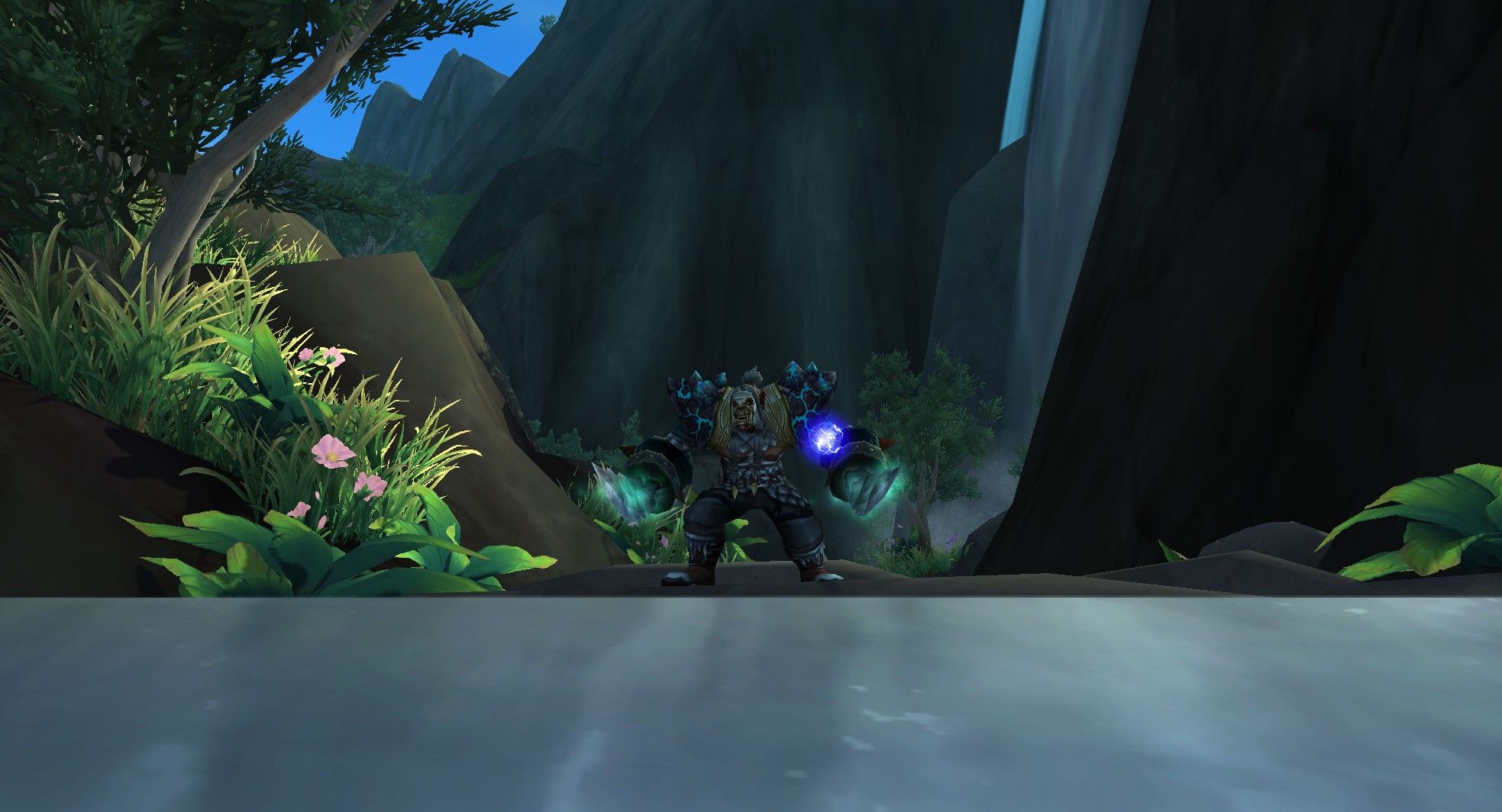 Here are reasons you should consider choosing Enhancement: 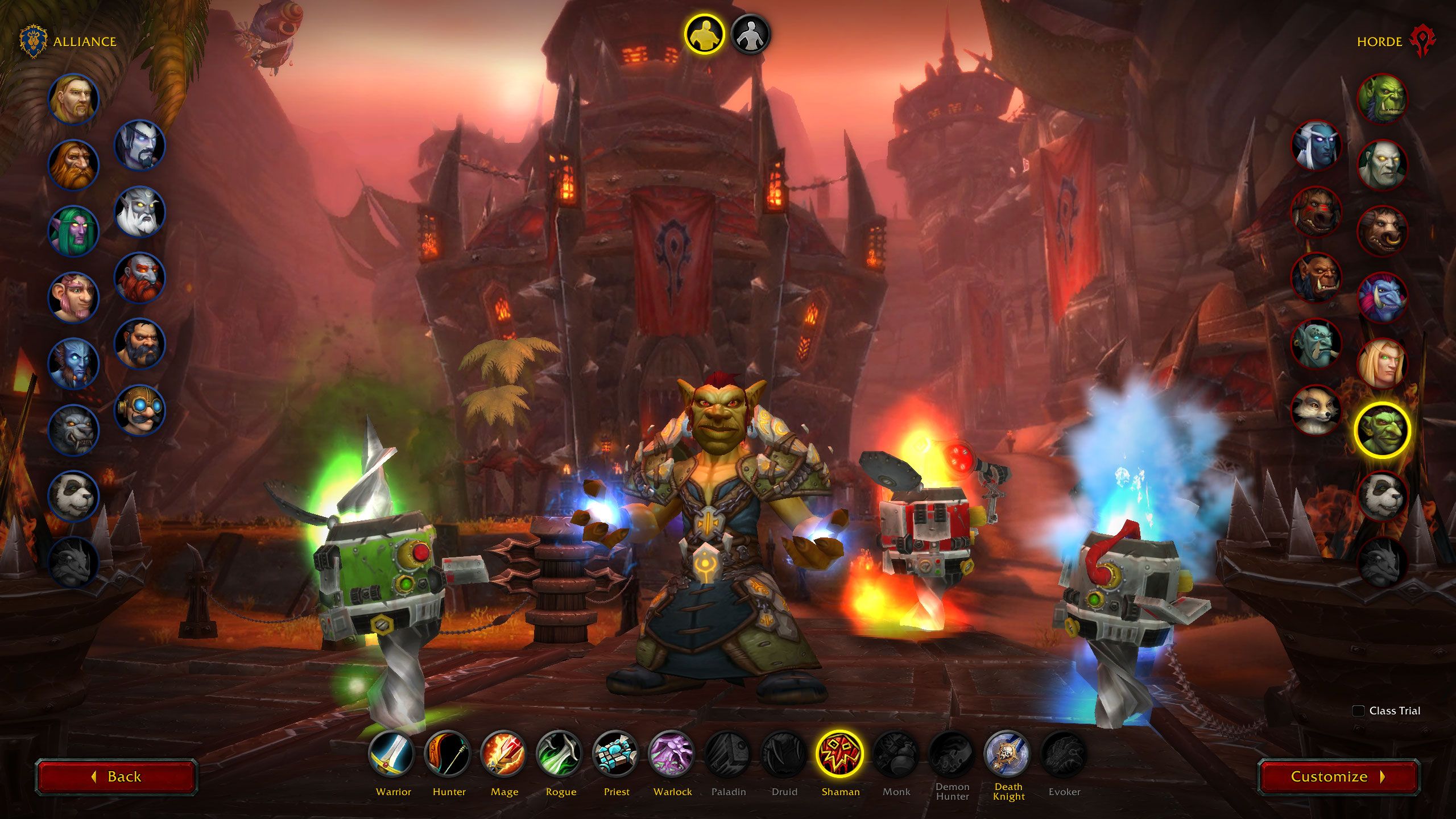 While you can pick any race you want as your Enhancement Shaman, if you’re looking for some extra benefits, here are some races that can provide them.

While some of these are better than others, Goblins offer the most with their Haste buff, considering how valuable it is for the specialization. Trolls offer a Haste buff too, but it’s a temporary, burst-window buff, not a passive buff, giving Goblins a more consistent supply of the secondary stat. At the end of the day, though, pick what you want to play, as these buffs are relatively minor in the overall scheme of things. 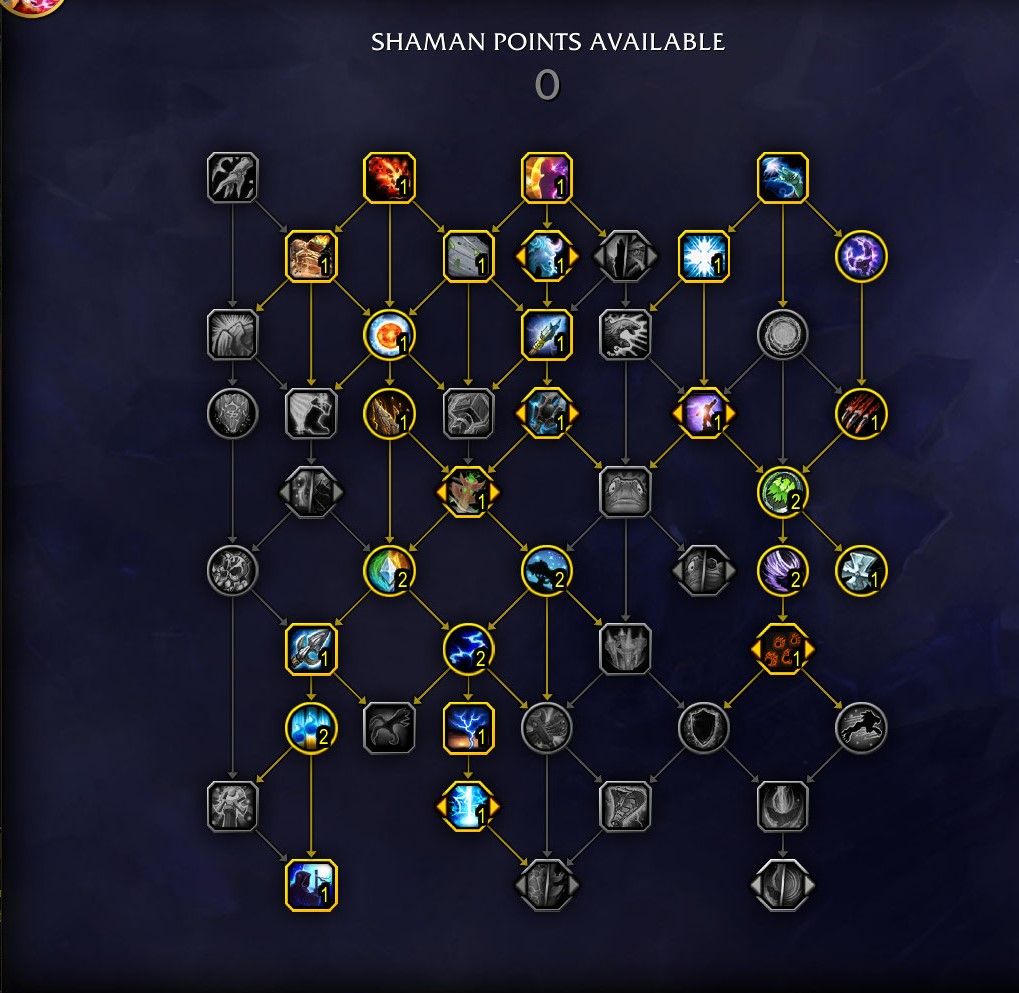 While the above tree is a decent guideline to follow, when it comes to the main tree for Shamans, they have an incredible amount of diversity in terms of self-sustain and utility. They have so many interesting talents that can be used in plenty of niche situations, so there is always the chance that from dungeon to raid to world content, you’re going to be swapping some around. That said, Lava Burst, Wind Shear, Flurry, and Wind Rush Totem are your must-haves no matter what.

Also, here are a couple of talents to consider taking that weren't taken in the above tree:

Don’t worry too much about optimization when leveling and doing your world content in general. This is the time to pick the talents you want to play around with and try them out. Considering you can change them anywhere, have fun with your options. This goes for the Enhancement talent tree as well. 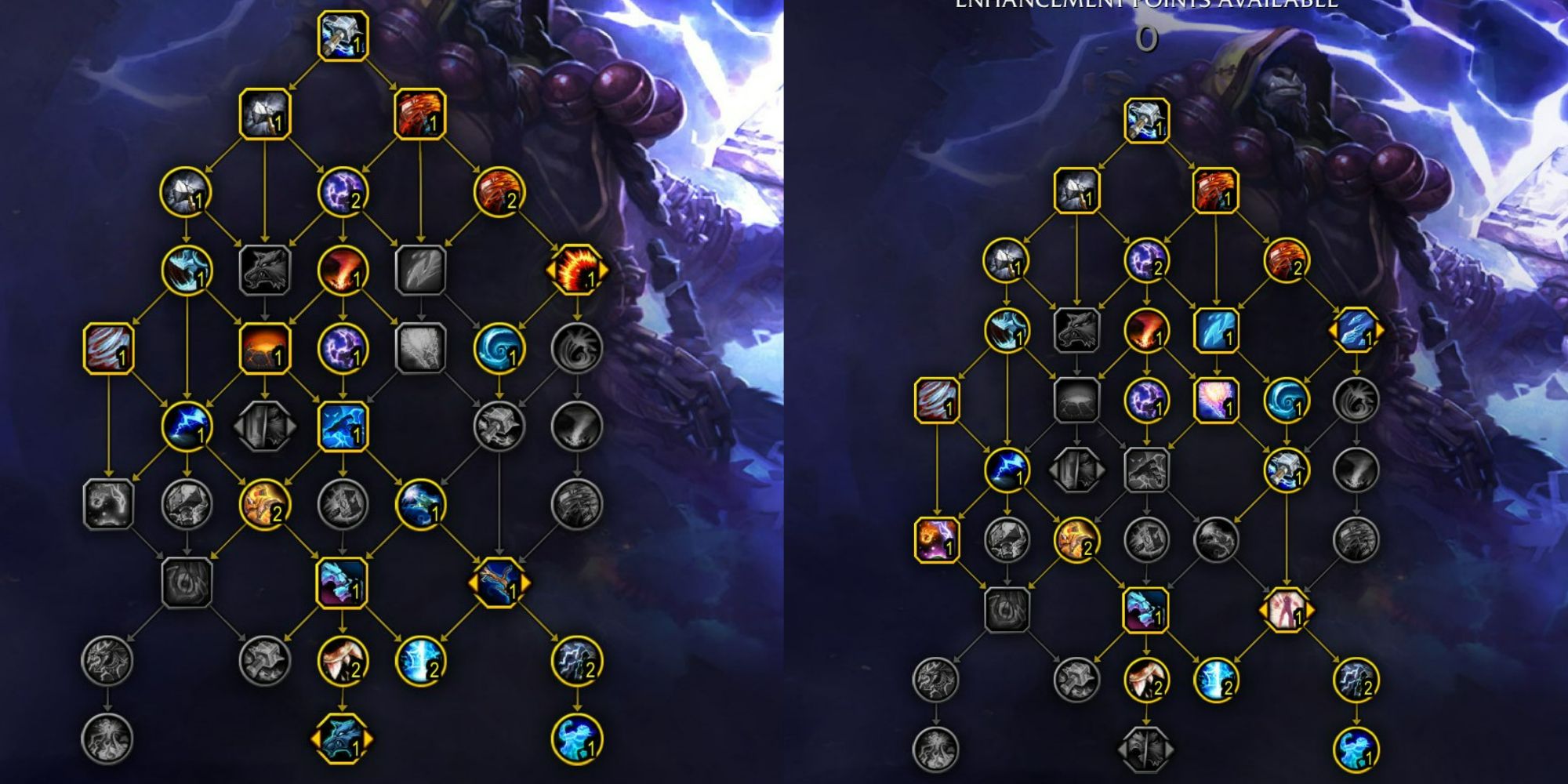 The above talent trees encompass both dungeon/area-of-effect content (left image and first expandable table) and raid/single-target content (right image and second expandable table) for Physical Enhancement Shamans. There are a few differences between the two (which will be addressed in the next sections), but let’s go over the most important talents for a physical build in general:

These are the most important talents for dungeons to ensure you can deal big area-of-effect damage:

These are the most important talents for raids to ensure you can deal big single-target damage: 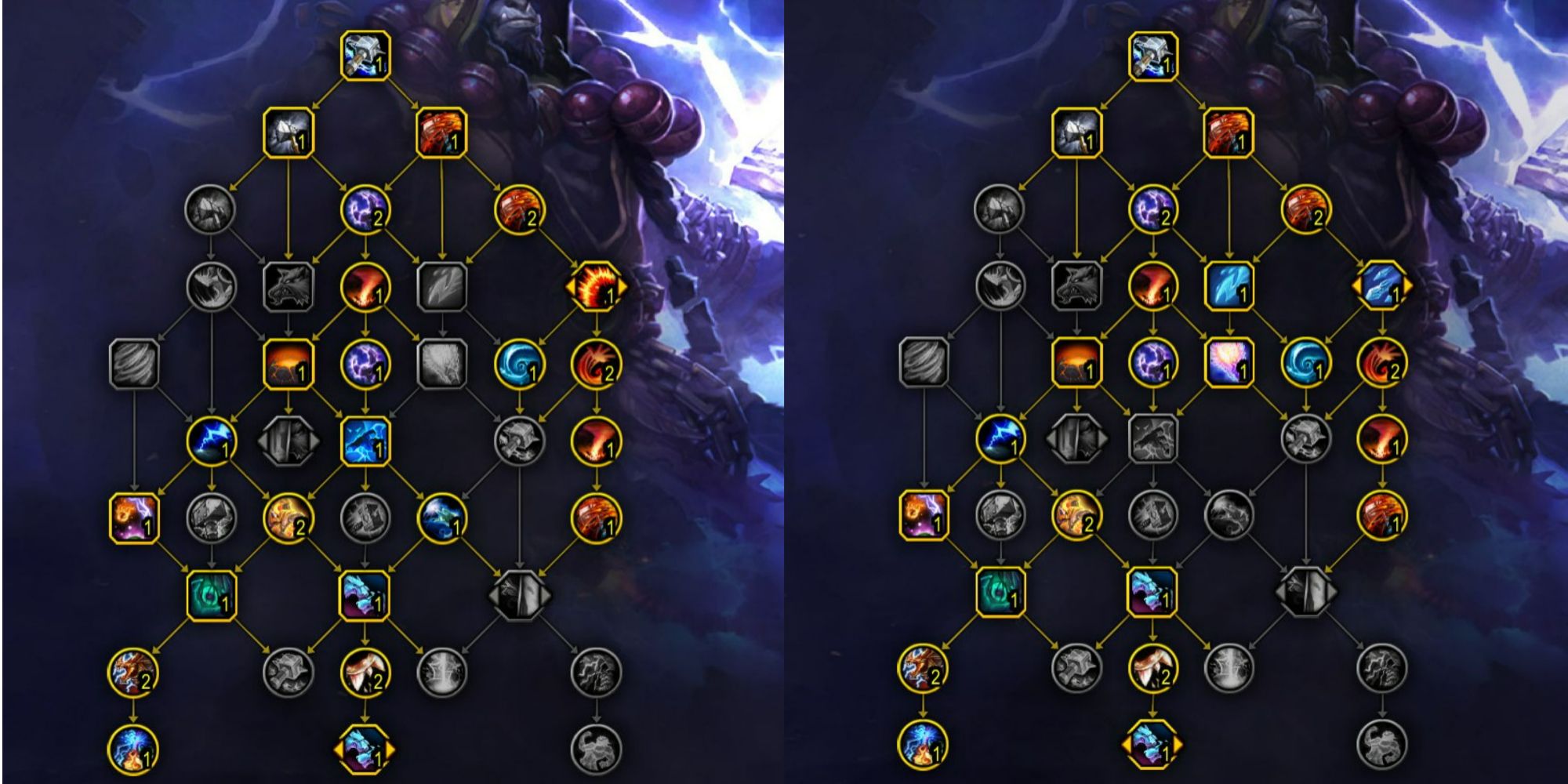 The above talent trees encompass both dungeon/area-of-effect content (left image and first expandable chart) and raid/single-target content (right image and second expandable chart) for Elementalist Enhancement Shamans. There are a few differences between the two (which will be addressed in the next sections), but let’s go over the most important talents for an Elementalist build in general:

These are the most important talents for dungeons to ensure you can deal big area-of-effect damage:

These are the most important talents for raids to ensure you can deal big single-target damage: 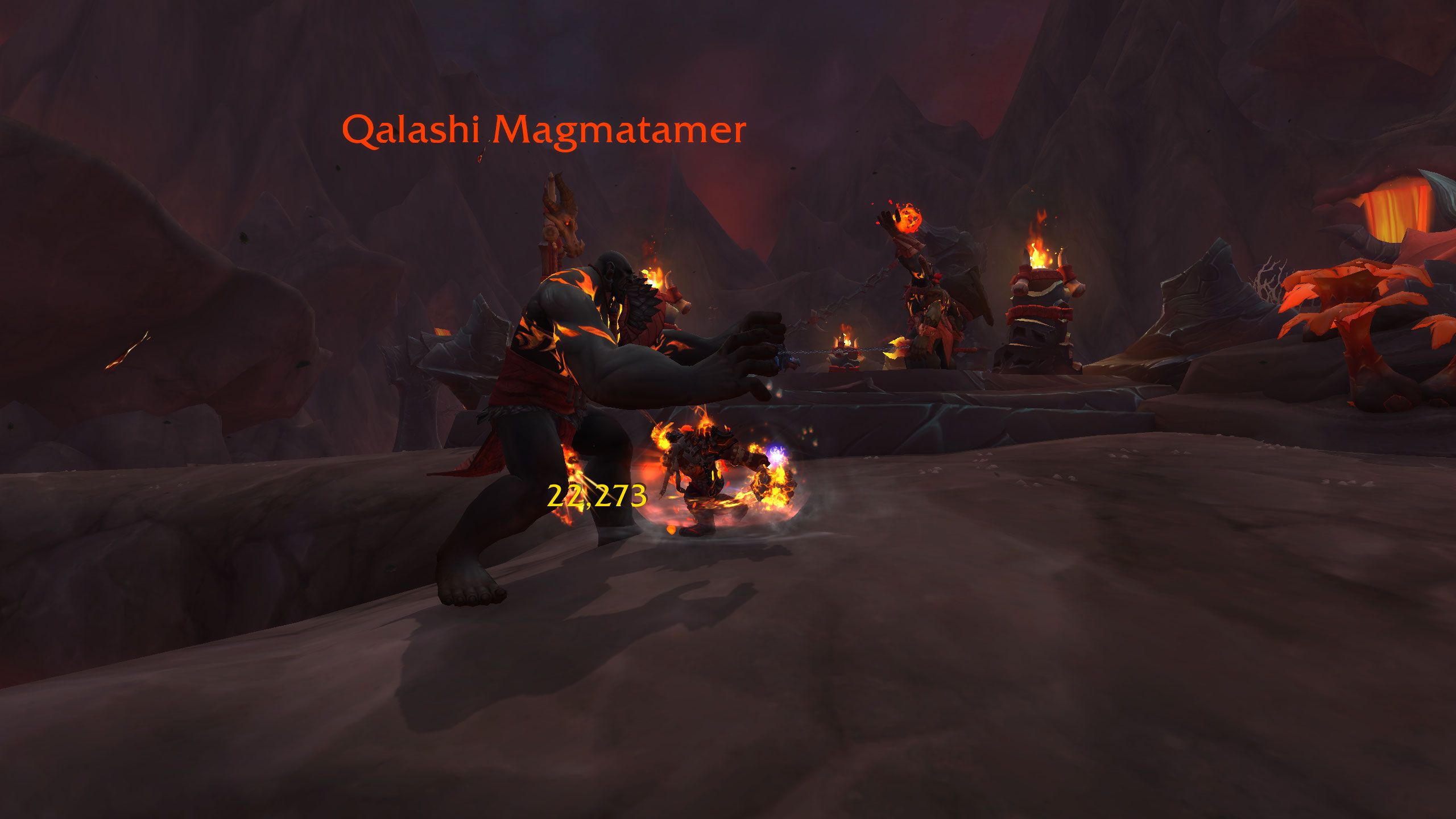 The abilities of Enhancement Shamans, regardless of what type of talent build you’re running, are extremely interconnected. In other words, most of their spells have some type of synergy with another one of their spells, making the gameplay quite interactive.

Here's a sample rotation if you're running an Elementalist area-of-effect build:

The key here is not over-capping your Maelstrom Weapon stacks; you want to spend them as soon as you can upon reaching five (or above) stacks.

Thus, the gameplay requires you to react effectively to both your Maelstrom Weapon instant casts, and the normal cooldown resets of Stormstrike or Lava Lash, depending on which talent build you’re running.

One of the best macros you can have as a Shaman lets you send an ability to your cursor’s location (like quick cast). Normally, your totems need to first be selected, and then you must click where you want to deploy them (at least those that don’t automatically get placed at your feet). This macro combines that into one step, sending your totem to your cursor’s location: 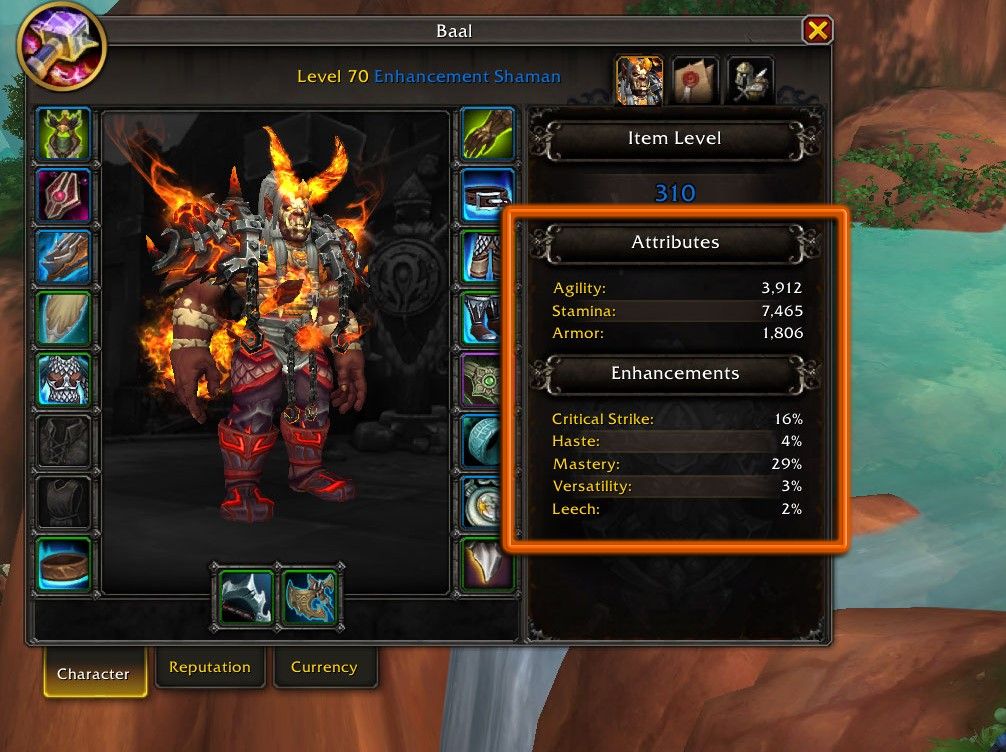 Looking at both the physical and elementalist talent builds as the main options for Enhancement Shaman, they have slightly different stat priorities from one another. Thus, while Agility is still their primary stat, their secondary stat priorities differ slightly.

The key difference is Haste and Mastery, with Versatility and Critical Strike being equally unideal for either talent build. So, once you’ve decided on which kind of Enhancement talent tree you want to pursue, aim for your most important secondary stat accordingly.

Remember that these rankings don’t mean that Mastery is bad for Physical builds and Haste is bad for Elementalist builds; rather, one is slightly better than the other.

Don’t let these secondary stat priorities prevent you from equipping gear that provides a flat upgrade to your Item Level and primary stats if it’s that much better.

Bearing in mind the different stat priorities of a physical and Elementalist build, your gem of choice depends on which talent build you’re running. As such, make sure you know which one you want to have before buying (or crafting your gems).

While you could opt for gems that only give either Haste or Mastery for their respective talent builds, it’s better to boost both stats. Even though both types of talent builds have their preferred secondary stat, Haste and Mastery are still great on them both. Also, if you need a cheaper alternative (green quality gem instead of blue), focus on the most important secondary stat for the build you’re running.

Depending on what crafting tier level the gem is, it will offer different numbers of stats.

There are many enchants to choose from, but below are the most important ones that you should strive for no matter what. And again, remember that the value of the enchant depends on its crafting tier.

Your talent build (physical or Elementalist) should dictate which ring enchant you go for.

Through crafting and world content in general, gear has become rather accessible in Dragonflight. However, please note that while you’re leveling, just pick up the quest rewards (or dungeon rewards if you’re dungeon grinding) as they improve, and don’t worry too much about your stats or item level.

Before the release of Mythic Plus and Raiding content, there are a couple of key ways to gear up: Dungeons, World Quests, and crafting. While you should aim for the 382 pieces from crafting, you can also shoot for regular Mythic dungeons, which reward gear at 372 Item Level.

While physical and Elementalist talent builds will want slightly different gear, anything that has both Haste and Mastery is a winner. But if you can only find gear with one of those stats, it doesn’t matter if the second one is Critical Strike of Versatility.

Here are some good pieces to aim for in the new dungeons before the release of Mythic Plus and Raids: