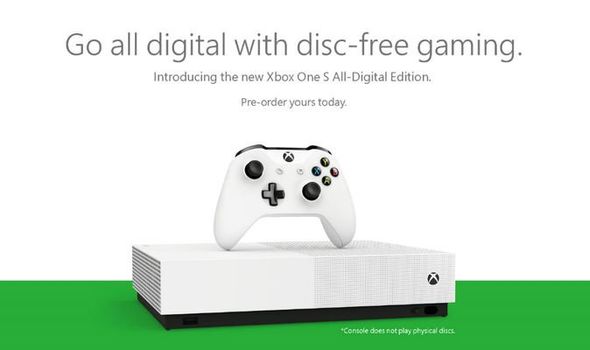 The Xbox All-Digital Edition is being released May 7 and will contain everything a normal Xbox One S console has – bar a disc drive.

The good news is that while you won’t be able to use any of your physical collection on the new Xbox console, you can buy it at a cheaper price.

The All Digital Edition will cost $249.99, will come with a free games bundle and also arrives with another sales pitch.

Whenever Microsoft holds a sale, the All Digital Edition will also cost $50 less than the standard S console.

As mentioned above, The Xbox One S All-Digital Edition comes bundled with three popular games – Minecraft, Forza Horizon 3 and Sea of Thieves.

Here’s more from Microsoft, who confirmed today: “hose new players joining us can get a head start on their digital collections and discover their next favourite game through Xbox Game Pass.

“If you haven’t tried Xbox Game Pass yet, the Xbox One S All-Digital Edition comes with a special offer to get started with access to over 100 great games, and with new games being added all the time there will always be something new to queue in your digital library. Cord cutters will enjoy watching 4K HDR entertainment with Netflix, Amazon and more, and thousands of Xbox One games are available from the Microsoft Store digitally.

“We realize price plays an important role in providing the opportunity to make console gaming more accessible to more gamers around the world. Available for pre-order today at $249.99 USD, the Xbox One S All-Digital Edition is $50 USD less than Xbox One S, and we expect to maintain at least that price difference between the two consoles going forward.

“You can pick up the disc-free Xbox One S All-Digital Edition at your local Microsoft Store or online, as well as select retailers worldwide including Walmart, Best Buy and Amazon.com beginning May 7.”

The All digital Edition was announced alongside the new Xbox Game Pass Ultimate subscription service, which combines Game Pass with Gold.

Membership will cost $14.99 a month, and there’s a free way to try out the service.

Starting today, Microsoft is inviting a limited number of the Xbox Insider community to join and test Xbox Game Pass Ultimate before it launches later this year in current Xbox Game Pass markets.

No release date was announced for Game Pass Ultimate but it is coming in 2019.