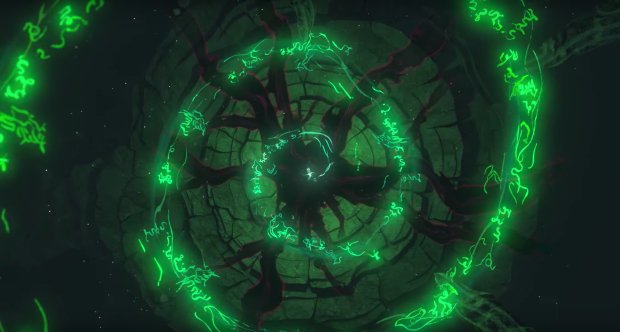 A haunting musical score can be heard playing throughout the trailer. While this may seem like little more than an eerie soundtrack to set the mood of the game, the audio actually hides something very interesting.

When the audio is isolated and then reversed, a hidden message becomes apparent. Within the score, a small voice calling ‘help us’ can be heard. Others have also noticed this and picked up on the strange message leading to the obvious question, who exactly is asking for help?

Our theory – and again this is pure speculation – is that the ancient forces trapping Ganondorf below ground (demonstrated by the white hand pressing down on Ganondorf’s corpse) are now struggling to contain him.

They call out for help, presumably to Link and Zelda, and answering that call may well be the reason our heroes are investigating the strange temple/catacombs in the first place.

The body in the trailer appears to be a wounded, part desiccated Ganondorf, with Malice either pouring in or out of a chest wound. LootPots points out that the wound on the chest is in the same place as where Twilight Princess Ganondorf was stabbed.

Additionally, the white hand seems to be pressing on Ganondorf via this wound, perhaps because it is his weak spot. Our take on all this? We think this will be a new undead version of Ganondorf, with a big part of the game focused on stopping him before he can fully restore himself.

It may perhaps seem a little dark for Zelda, but then Majora’s Mask was a pretty dark Zelda game. Plus, the trailer plays out like a horror movie so surely it’s not completely out of the question!