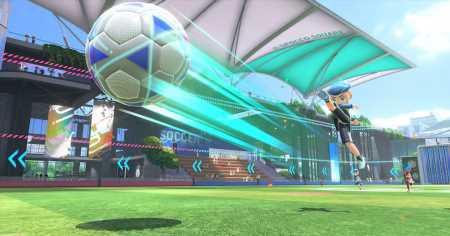 Nintendo Switch Sports is a follow-up to the hugely successful Wii Sports, and it’s meant to be a wholesome good time for the whole family. Nintendo has also put some profanity filters on the game to ensure someone can’t put something too outrageous on the screen in an online match. Unfortunately, these measures are easily circumvented, and some players have been delighting in trolling their opponents with crude jokes.

In Nintendo Switch Sports, players can create titles for themselves by selecting from a list of nouns. Some people choose to use this as an avenue for jokes and references, which are often cute and harmless.

But some users have already figured out how to manipulate these titles so that “Fan of Child” and “Fan of Mom My Milkers” jokes are prolific in the game right now. It’s not a hugely disruptive problem, as Nintendo keeps online communications relatively limited in the sports title.

It’s a long-standing tradition for players to evade NIntendo’s profanity filters, which often don’t manage to solve the actual problem of inappropriate material on the platform. With a nominal amount of creativity, Nintendo Switch Sports fans are going wild even with these sanitized tools, especially because other players can’t report them. It seems as though Nintendo Switch Sports shares many of the same problems as its predecessor, from people making inappropriate avatars to players accidentally breaking their TV screens.